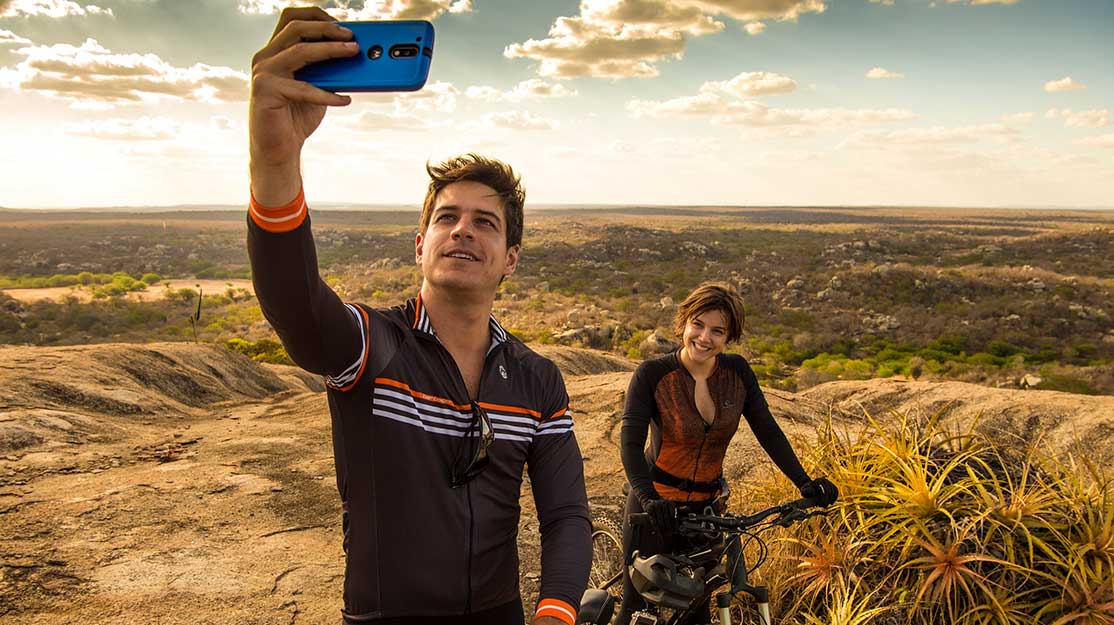 George Moura and Sergio Goldenberg, writers of Brazilian ‘superseries’ Onde Nascem os Fortes (Land of the Strong), talk about how the country’s unique landscape inspired this story of love and tragedy.

When an adventurous young man, Nonato (Marco Pigossi, Edge of Desire), goes missing after a fight, his mother Cássia (Patrícia Pillar, Side by Side) and his twin sister Maria (Alice Wegmann, Dangerous Liaisons) begin a dangerous journey in search of answers in a town where brute force is more powerful than the law.

From writers George Moura and Sergio Goldenberg, the pair behind fellow Brazilian dramas Doomed and Siren’s Song, the series is described as a modern and female-led western that looks at love, hate and forgiveness as it delves into an old family secret that puts many lives at stake.

As Globo brings the series to the international market for the first time, Moura and Goldenberg tell DQ about the origins of the drama, their writing process and the challenges of shooting in a unique landscape.

What are the origins of the series?
Sergio Goldenberg: Land of the Strong is a story about how passion can lead to love and hate, and how forgiveness is the only way out of certain impasses. Based on the classic telenovela format – the story of a love thwarted by a tragedy – we have crafted a story that portrays Brazil as it is today.
George Moura: The story’s setting was defined long before we thought about the plot. Although I’m from the city of Recife, which is the capital of Pernambuco, in north-east Brazil, I discovered the hinterlands very early on. The Brazilian hinterlands have a symbolism similar to the west for Americans or the desert for Arabs. Land of the Strong is not a story about the friendly side of Brazil, for which the country is more commonly known. The plot addresses a Brazil where survival of the fittest prevails, where citizens find neither support nor assistance from the state and must make it on their own. This is one of the aspects of this story, which we developed after researching and experiencing the north-eastern hinterlands.

How did the location inspire the story or setting? What makes it a good backdrop for a drama series?
Moura: The hinterlands are more than a setting; we moulded them into a character in the story. We’ve always wished to return to the geography of the hinterlands to tell new stories, and Land of the Strong was a great opportunity. The hinterlands are a place with a mythical atmosphere which is deeply related to the formation of Brazil. What’s more, it has a confrontation between the old and the new that is very rich in terms of drama. Land of the Strong is a story that needs to take place in this area. Artistic director José Luiz Villamarim (Brazil Avenue, Doomed) and our entire team embarked on an adventure to make the show, shooting across different locations in the north east for almost six months and breathing life into the imaginary town of Sertão. We have a large number of external scenes, and it was an intense team effort. Essentially, our intention was to showcase a Brazil that few people know.
Goldenberg: By leaving the Rio de Janeiro-São Paulo axis, we created an opportunity to explore a Brazil that, although very rich, is still unknown to many. It’s extremely important for us to portray Brazil from a different angle from the one the public is used to seeing.

What research did you do before writing the scripts?
Moura: I decided to take a long trip around the north east before writing the show. I believe we need to contemplate the world with a clear head before writing a story, so that’s what I did. With pen and paper in hand and some books in my luggage, I travelled more than 3,000km through the hinterlands in 10 days, taking notes, daydreaming, listening to the silence and experiencing the local culture. Sergio and I used this information to outline the story we wanted to tell. The next step was a lot of work. It’s an obsession, a sort of trance that is more or less lucid at times. In many instances when we wrote sequences, we had already imagined where they would take place. This is not the only way, but it brings truth to this story.

Tell us about your writing partnership – how did you work together?
Moura: I met Sergio, whom I affectionately call Gold, a golden boy, more than 15 years ago during a TV job. From then on, we’ve always found a way to work together. I have full confidence in him and deep admiration for his talent and insights in tune with the world and, above all, people. He’s a tireless partner, always ready to get the best from the scene. It’s a pleasure and a joy to join him on this journey.

How was your writing process similar or different from that for Siren’s Song, Doomed and The Party?
Goldenberg: Above all else, the journey was different. Siren’s Song had four episodes, Doomed did not reach 10 and The Party had a small number of episodes as well. We made a more daring choice in Land of the Strong: despite the greater number of episodes, we challenged ourselves to write a story with only a few central characters – approximately nine – who develop due to the twists and turns of the plot and the changes they undergo throughout the story. It was difficult but very rewarding, because the audience’s response surprised us. It’s like we did four seasons of the same series all at once.

How did you work with the directors to bring your scripts to the screen?
Moura: When you write, you inevitably imagine the characters, geography, intentions and everything else. That’s where my partnership with Villamarim, comes in. We’ve made Por Toda a Minha Vida, Siren’s Song, Doomed and The Party together. It’s a type of partnership in which these things seem to be born together. Villamarim doesn’t write and I don’t direct, but somewhere along the line we meet to help transform what’s on paper into moving images.

What were the biggest challenges you faced, either during the scriptwriting or in production?
Goldenberg: Keeping the audience’s interest for more than three months on air with daily broadcasts, and shooting in a very dry environment, with very high temperatures, far from urban centres. The team was isolated for months, creating a sense of immersion that can be felt in every scene.

How is Brazilian drama evolving and what new opportunities are there for writers?
Goldenberg: The Brazilian market is very active. In addition to linear TV, there’s cinema and new platforms. I believe diversity is the hallmark of these times, and this is opening up new horizons for bolder stories that are yet to be told.