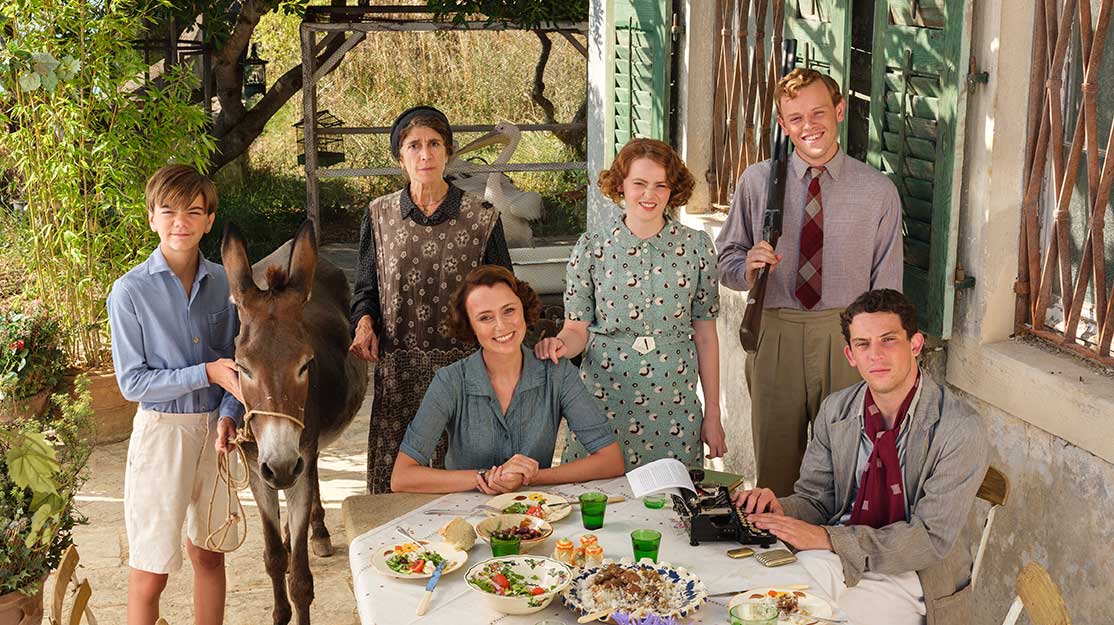 Writer Simon Nye talks to DQ about writing The Durrells, ITV’s hit family drama about a British family living on the idyllic Greek island of Corfu in the 1930s.

For a certain generation, Simon Nye will always be known as the creator of long-running comedy series Men Behaving Badly, a series that defined the ‘lad culture’ of the 1990s.

In fact, the writer and author has his roots firmly in the comedy genre, having written other series including Hardware, Wild West, Carrie & Barrie, Beast and Reggie Perrin.

More recently, he penned TV biopic Tommy Cooper: Not Like That, Like This, and wrote a 2010 episode of Doctor Who, with Matt Smith then in the lead role.

Today he’s still writing comedy, but The Durrells is arguably more dramatic and certainly more exotic than anything he’s written before. In fact, he wrote a BBC TV movie based on Gerald Durrell’s autobiographical novel My Family and Other Animals in 2005, before returning to the novel and its two sequels – known as Durrell’s Corfu trilogy – for the ITV drama, which first aired in 2016.

Now in its third season, the series continues to tell the story of Louisa Durrell (played by Keeley Hawes) and her four spirited but unruly children who have left England for a new life in Corfu in the 1930s. It is produced by Sid Gentle Films and Masterpiece in the US and distributed by BBC Worldwide.

“I think it is our best season – I wouldn’t say if it was worse – but we’re in that sweet spot where we know what we do best and there are lots of stories to tell,” Nye says. “Corfu is still looking gorgeous.”

Nye is no stranger to adaptation, having turned his own Men Behaving Badly and Wideboy novels into TV shows. The second was known on screen as Frank Stubbs Promotes, starring Timothy Spall. He also penned a TV movie version of The Railway Children for ITV, as well as his earlier Durrells effort.

“We always try to have a story from the book in each episode but it’s getting harder so we’re branching out a bit,” he says of The Durrells. “It’s a balance between not inventing so much that it’s nothing to do with the family in the books and the family we know lived on Corfu, and the need to create stories that last the course.”

That challenge has been extended further in season three, with the episode count rising from six to eight. “Eight episodes is actually very different from writing six episodes because it’s a different rhythm, but it’s been great,” Nye adds. “Not that a fourth season has been confirmed yet, but I’m already writing the first two episodes of the new season.”

Each episode presents the challenge of finding a story for the each of the large cast, which includes Louisa and her children Larry (Josh O’Connor), Leslie (Callum Woodhouse), Margo (Daisy Waterstone) and Gerry (Milo Parker), not to mention the returning Greek characters and this season’s new arrivals.

“Initially you want to come up with a satisfying spine for the whole season,” says Nye, who adds while his storylines are informed by the books, he also has to do a lot of legwork himself. “Leslie has a long story that runs through it and we’ve got such great actors that you really want to give them something they can get their teeth into, other than just looking pretty on the terrace. That’s the real challenge, in 46 minutes, to get everyone firing. The stories do move along swiftly so it’s a question of cramming as much as we can in without making it look ridiculous. I tend to start slowly and later episodes are easier to write.

“We try to have a grand plan at the beginning but you find in the early episodes that your characters want to go in different directions. You just want to have an idea of what’s coming up because then you can build on what’s there and sow some seeds for later episodes. But a lot of people don’t watch the whole season, so you have to make it work on an episode-by-episode basis as well.”

At its heart, however, The Durrells is the story of a family loving one another but simultaneously at war with each other, an idea that has served as the framework for the entire series. The story opens with Louisa taking her brood to Corfu in an attempt to patch up their differences, but the Mediterranean landscape only serves to highlight their individual and collective eccentricities.

“Who wants to watch a functional family?” says Nye. “It’s got to go wrong. Not that we’re teaching lessons, but you do learn from seeing other people screw up. Although it’s set in the 1930s, they’re quite a modern family. We can’t swear, being on television pre-watershed, but their feistiness comes across. They’re quite a handful.”

While the British family’s place in Europe is at odds with the current political landscape, Nye is reluctant to pepper The Durrells with references to Britain’s vote to leave the Europe Union, despite his own staunch anti-Brexit position. But with war looming – season three is set in 1937 – the drama does serve as a reminder that Europe is not a place of harmony.

“In many ways, they’ve done it all wrong,” Nye says of the family’s efforts to integrate into their new surroundings. “They’ve got friends but they haven’t really learned the language. The real Laurence Durrell learned quite a lot of Greek, and Leslie a bit. But they’re not adverts for internationalism at all. That’s how your average Brit, me included, would be. I’ve learned very little Greek, appallingly; I should have worked harder at it. But they’ve gone for other reasons – they were falling apart as a family in Britain and are trying to heal that.”

Writing every episode of the series means Nye has little time to mix with the cast and crew, admitting that he spends most of his time trying to catch up with the production schedule instead of hanging around on set. “Especially with eight episodes, you’re trying to make sure you deliver them on time,” he says. But he hasn’t yet reached a point where he wants to bring other writers onto the series.

“Most writers, if they’ve got the energy and the time, would prefer to write everything themselves because it’s your own voice and, also, if somebody’s else’s episode goes wrong because they’re not as used to the characters as I am, you spend a lot of time fixing it. So as long as I can, I’ll try to write them all. But the principle of team writing is a good one and we want some of the American action and long-running series. We should be embracing that more because with a hit series, you want to be offered lots of episodes.”

Unsurprisingly, one of biggest challenges on the series is filming with the many animals that make up budding naturalist Gerry’s expanding menagerie, with the third season introducing a sloth and flamingos, which Nye says make pelicans look positively professional.

They’re the source of many jokes, however, which adds to the light-hearted nature of the series. “It’s got lots of jokes in it because that’s often the way families relate to each other, especially that family, which is full of lively minds,” Nye explains. “So humour is often the way they get through the day. When I first started doing comedy I thought you didn’t need to bother with a plot, and I quickly learned that that’s a very poor way of writing a sitcom. And it’s even more true of drama that you need to focus on it. If the plot’s working, it makes the dialogue so much easier. You just want it to be credible.”

As The Durrells heads into the sunset of its third season, Nye says there’s still more fun to be had with the eponymous family beyond a potential fourth season. “It feels like we’ve only just scratched the surface,” he says. “They were there for five years [in real life] and Milo, who plays Gerry, is growing. There is still quite a lot to say but I hope we won’t outstay our welcome. The war is looming in Corfu and Greece but certainly we want to get them home and get to know them a bit more.”