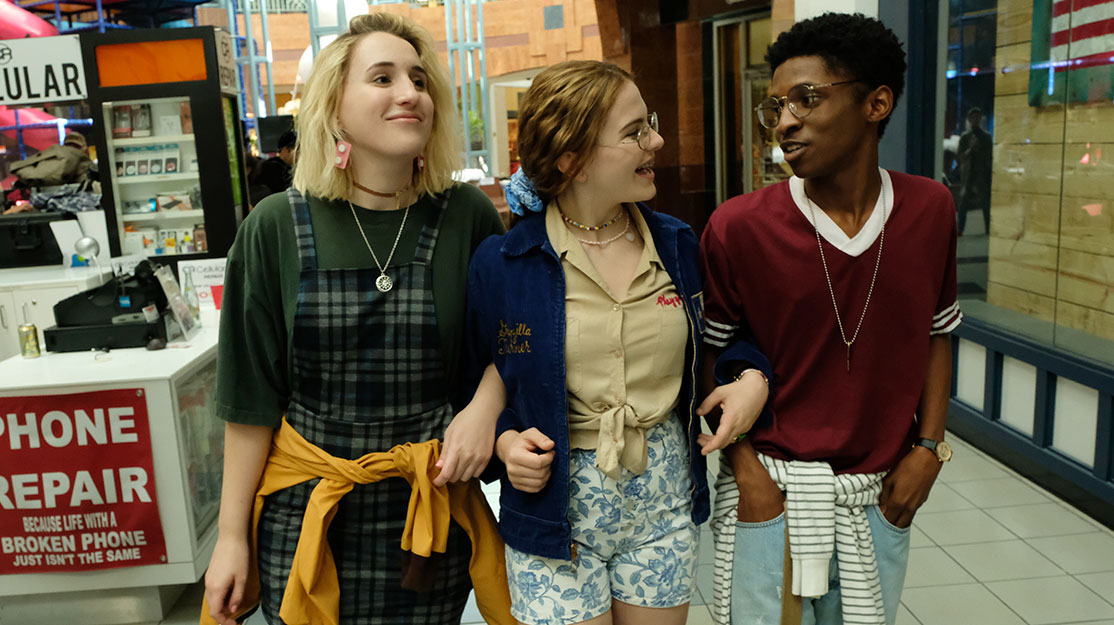 Easy A writer Bert V Royal and The Sinner producer Michelle Purple tell DQ about teaming up on US cablenet Freeform’s high school drama Last Summer, from producer Entertainment One.

“It’s this exploration of apathy – and teen angst, obviously, because it’s my favourite thing to write about, because I’m a teen girl!” jokes Bert V Royal about his upcoming television drama Last Summer. Its high school setting is familiar territory for the writer, who broke out with 2010 feature Easy A, the story of a clean-cut student played by future Oscar-winner Emma Stone (La La Land) who becomes infamous when a lie about losing her virginity spreads across the school.

Royal went on to write episodes of Gigantic, Recovery Road and Council of Dads. But Last Summer takes him back to the 1990s, where he is putting a new twist on the ‘girl behaving badly’ genre in a story that villainises not the villain but the victim.

Described as an unconventional thriller that takes place over three summers – ’93, ’94 and ’95 – in a small Texas town, it explores the repercussions when beautiful and popular teen Kate goes missing and, seemingly unrelated, Jeanette goes from being a sweet and awkward loner to the most popular girl in town. But by 1995, Jeanette is the most despised person in America.

Each episode switches between the perspective of the main characters, testing viewers’ loyalties as more information is revealed.

Thinking of real-life people such as US figure skater Tonya Harding or former White House intern Monica Lewinsky, who inspired the series, “these people are thrust into the national spotlight, and that’s what happens with our character,” Royal explains. “Jeanette gets thrust into a national spotlight for what might have been a horrible error of judgement or might have been a complete fabrication.

“The fun part of the show is the way that we tell it as a big puzzle and it requires the viewer to pay attention. If something doesn’t make sense, it probably will in 45 seconds. But we like to keep them on their toes in this show. We do want this to be a puzzle in the sense of having Easter eggs and hints and clues, and we want everyone to play armchair detective with this game.

Executive producer Michelle Purple compares the thriller element to watching an episode of US true crime series Dateline. “You’re watching it and you’re like, ‘It’s the husband.’ And the all of a sudden, ‘It’s the mother.’ So it’s like that but between these two girls,” she says.

Royal has been plotting the series “for a while,” which has given him the chance to think long and hard about how the pieces of the puzzle might fit together. The project then took off when Iron Oceans Productions, the company founded by Purple and actor Jessica Biel, joined.

“They came on literally last summer and they had read the scripts. I was a huge fan of the stuff that they’ve been working – The Sinner is brilliant, and Limetown – and I’m just a massive fan of how they make really bold choices. It was exactly what I needed in a partnership. I jumped into bed with them really quickly,” Royal says.

“For Jessica and I, we’re always looking for something we’ve never seen before, and we wanted something that appealed to a wider audience and something that we can watch with our families,” Purple explains. “We read this and it immediately spoke to our sensibility. I, of course, was in high school in the ’90s, so I had the nostalgia of that. It spoke to our brand but it appealed to a broader audience than the things we had done before.

“We had also been fans of Bert and wanted to work with him. And [studio and distributor] Entertainment One has been super supportive. It’s just been a good journey to this point. We’ve done the pilot. They picked it up immediately to series. Every week you’re going to want more.”

Purple and Royal are both particularly keen to create the type of water-cooler television that has been stymied by the rise of streaming platforms, meaning viewers rarely watch the same things at the same time unless a particular series hits the zeitgeist.

“There’s never going to be a boring episode,” Royal claims. “Usually when you write a show, there’s one episode if you’re lucky, sometimes two, where you’re like, ‘This is a throwaway episode.’ There’s no throwaways in this. It rewards viewers. Pay attention!”

“With so much bingeing going on, only shows like Game of Thrones create a conversation between weeks,” Purple continues, “but this can do that too. Just the way he has structured it and the way you change sides, we want to create the water-cooler moment.”

While Biel has appeared in The Sinner, she is not currently slated to appear in Last Summer. “We have had to break the news that Jessica can no longer play a high school student,” Purple jokes. “But we’ve been partners for over 10 years, she’s very hands-on. She works with the writers, in casting, in the editing room.”

“Even from producers who are not famous actors, I’ve not had that kind of treatment,” Royal says of working with Biel. “It’s really wonderful. It’s such a testament to her and she actually gives amazing notes, which is an even better thing. She’s always willing to discuss things and between the three of us – I consider myself a partner of their company now! – we have great discussions. We have great conversations. They’re pushing me to go further and I love that. How often do you get that? Usually, people are telling you, ‘Oh, that’s too much. Don’t go there.’ But they’re actually helping me and so is Entertainment One and Freeform. It’s really cool.”

For someone who has written a lot about the high school experience and has become known for coming-of-age stories in that arena, it’s notable when Royal admits he never went to high school.

“It’s weird. I was home schooled for the last three years of schooling, so a lot of it is me trying to fill in the pieces. It’s very Never Been Kissed,” he says, referencing the Drew Barrymore film about an undercover journalist who goes back to high school. “There’s also this other weird aspect of it – I got to see high school from a different angle without being a part of it. I was a voyeur to it. All my friends were still going so I sat on the sidelines and watched it all happen. That gave me a unique perspective that I can’t seem to break away from. One of these days I’m going to write something with grown-ups in it, I swear.”

With the pilot in the can, writing the series continues as filming is on hiatus owing to the industry-wide production shutdown as a result of the coronavirus pandemic. Royal says the writers’ room is filled with an eclectic mix of people who are bringing a range of ideas to the table. “The way that I like to work is I like to hear all the ideas. There’s no bad idea. So bring it on,” he says. “Personally, I like producing even more than writing. I love the puzzle of figuring out schedules and how to make days and budgeting. That’s again why I’m so excited about working with Michelle and Jessica, because at the end of the day, we’re all kind of running the ship.”

“We want people gasping all the way through. I’m so excited about the last five minutes of the season,” Royal teases, adding that season one also serves as a prologue for what could come in later seasons. “It’s going to be exciting, it’s fun.”