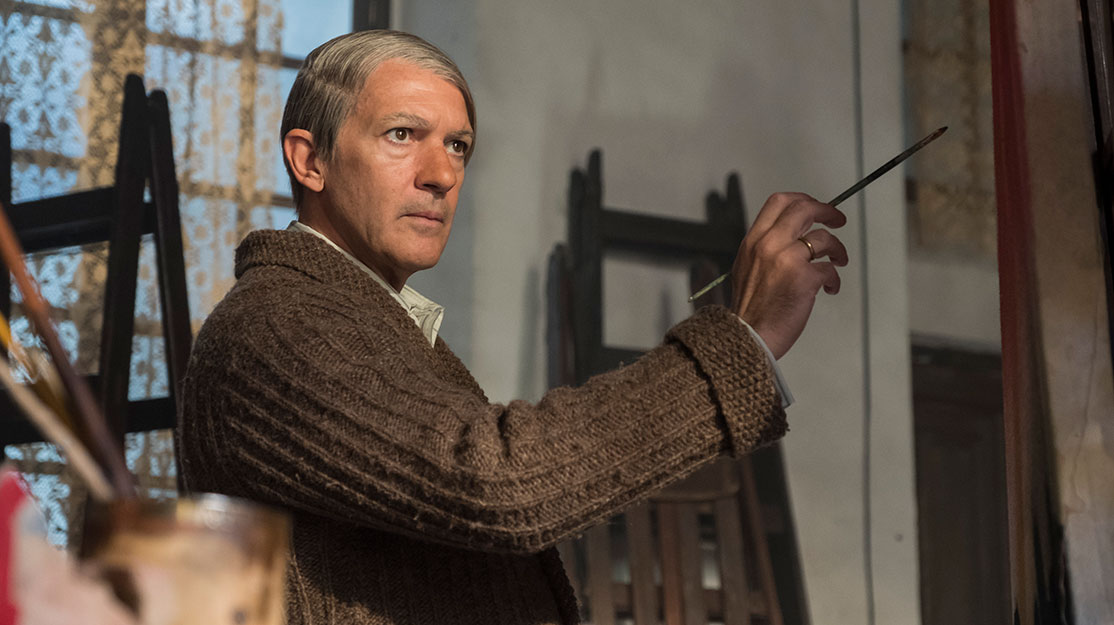 Spanish screen star Antonio Banderas transforms into one of his personal heroes for the second instalment of National Geographic scripted anthology series Genius. He tells DQ about playing the many faces of celebrated artist Pablo Picasso.

When it debuted in 2017, the first season of National Geographic’s anthology drama Genius became a critical and popular hit, drawing more than 45 million viewers worldwide and earning Emmy and Golden Globe nominations for its focus on the life of Albert Einstein.

Season two, launching around the world from next Monday, turns its attention to Spanish painter Pablo Picasso, with Antonio Banderas (The Mask of Zorro) playing one of the 20th century’s most influential and celebrated artists. The drama explores how Picasso imagined and interpreted the world in new and unorthodox ways – but also how his nature and relentless creative drive were inextricably linked to his personal life, which included tumultuous marriages, numerous affairs and constantly shifting political and personal alliances.

Here, Banderas tells DQ about his longtime interest in Picasso, how he gets into character and the challenges of portraying a man with as many faces as the portraits
he paints.

DQ: You say Picasso fascinates you – why?
Banderas: Because I am an artist. And when you recognise a real one, an honest one, somebody who is way bigger than you, there are no other words than fascination and curiosity. Besides that, he was born in my hometown, Málaga, and he was probably the only international hero we had at the time.

How was the series pitched to you and what was the appeal of taking on the role?
I didn’t know when I saw Genius: Einstein that there was going to be another one or that it was going to be dedicated to Picasso. But I loved it. I loved the quality of it. And I loved the fact that National Geographic, which is a channel that goes behind the facts, was going to explore the life of Picasso. I was also attracted by the presence of people I admire like [executive producer] Ron Howard and [showrunner] Ken Biller. So those things were guarantees that what we were going to do was something serious and well put together.

After portraying Pancho Villa (in And Starring Pancho Villa As Himself) and Che Guevara (Evita), what is your acting approach to playing someone who existed in real life?
Trying to get as much information as I can is number one, so I read books. Then I try to understand the script and how the character is positioned in the story, and then to understand the bible created by the creators – not only the script, but also how it is going to be shaped. What is the narrative process we’re going to follow? Is it going to be linear, or we are going to be jumping back and forth – as we are, actually. So trying to understand the entire project, from content to form.

How does the series tackle the story of Picasso’s life?
The only problem we have is that Picasso didn’t write very much about himself and he did very few interviews. He basically talked through his paintings. So all we know about Picasso is through the people who surrounded him, and everybody who was in the orbit of that planet called Picasso was affected by him in one way or another, good or bad.
Who he was is something we have to determine. I made decisions, sometimes followed by creating my own intuition, listening to as many voices as I could. I may question myself and say, ‘I think he did this. Now that I know the guy, I think he took this action for this reason.’ So I take those choices, supported or not, by the material that I have in front of me, which is the script.

Do you like art and enjoy painting? Are you a fan of Picasso’s work?
Hell yeah. Picasso is my favourite painter of all time. But before I even became an artist, when I was a kid, I loved Picasso. The thing that has always fascinated me about him is he practically did everything. Matisse is an amazing painter, but he’s got a very specific style. Picasso went through practically every style invented. And then there is a tremendous sincerity to him. He never looked for applause. He never worked for anybody except himself. That is amazing and, in our day, practically impossible.

How were the scenes of you painting filmed? Did you take any lessons or practice a lot?
I practiced the mechanics of brush strokes, holding the brush and understanding how the paints, brush and canvas interact. But my focus was more on understanding the character.

How did you transform yourself into Picasso?
It’s not a job I do alone. My character, and everybody’s character in this production, is made through teamwork. You cannot do this by yourself. Two people were fundamental: Davina Lamont, our head of hair and makeup, and Sonu Mishra, our head of costumes. I have never been so affected by the creation of a character. Never, in any movie – I’ve done 105 movies.
Sonu had studied deeply the complexity of how Picasso dressed himself, so when I step into his pants every morning, the character comes to me. It makes me smaller in size, it makes me wider, it makes me more wrinkled like Picasso. But I don’t think Picasso was very worried about the way he looked or anything like that. He had this kind of Bohemian ‘I don’t give a shit’ thing, and Sonu got that completely. She helped me enormously to understand the character. The way you dress is a proclamation of who you want to portray yourself as in front of others, so what she gave me was extraordinary.
Then in the prosthetic setup, there was a lot of suffering every morning. You have to learn to play with them because they are kind of a mask, but you have a person behind them like Davina who gives you tremendous security. She did a job with the character that is unbelievable, priceless. When they put things on top of you, you’ve got to know the value of gesturing, for example, or mannerisms. It’s a different face that you have to learn how to use.

How involved are you behind the scenes? Do you work closely with the writers and directors?
Absolutely. I had the scriptwriters around me and I could discuss certain lines. When I proposed things, sometimes they accepted my ideas. And it was the same with the directors, especially Ken Biller. Ken is the pump of the whole thing: he created the bible, he’s got the biggest responsibility on set and he listens a lot. Málaga, for example, was not in the schedule, but I made him come to Málaga and see where Picasso was born and the church where he was baptised, and those places were used [in the series]. He gave me a gift – he allowed me to shoot one scene in Málaga on the beach. It should probably have been done in Malta later, but we did it there in Málaga. It would have been beautiful for me as a kid to see Picasso walking on the beaches of Málaga.

What was the biggest challenge you faced on the show?
It’s funny, in [his grandson] Olivier Picasso’s book, it says Picasso hated his voice. That’s one of the reasons he didn’t do many interviews on radio or TV. So I created a voice for him. I make him a little bit lower in voice and try to give him a little bit more gravity. There is something in the way he walks and talks and I tried to use that and expand it. The only interview I have seen him do was for Belgian television, and he speaks almost like an Italian. I remember my father speaking like that, and my uncle Pepe.
The most difficult thing was that there were many different Picassos. There is a Picasso for every style, for every wife, for every lover. He transformed himself like he transformed his own painting. So sometimes he can be cruel, sometimes he can be a very lovely guy. It just depends. He’s a genius. And very confident, very secure in his skills as a painter. That gave him a tremendous security, and that is very dangerous too because if he finds people in his way, he becomes dismissive. And that can create a lot of problems.

Do you see yourself doing more writing and directing in the future?
Yes. In fact, that’s what I want to do, really. I’ve done two movies as a director [Crazy in Alabama and Summer Rain], but they were based on books and the novelists wrote the scripts. I want to write and direct the way I see the world. There’s a number of issues I would love to reflect about families, and another issue is hypocrisy. The way we live, we are all actors playing roles. We don’t express what we feel, and now with social networks, you start seeing what is inside, and it’s very dark.
When you are anonymous, what comes out is horrendous. So I’d like to make movies about that, about the true self of a human being and how we portray ourselves in society.