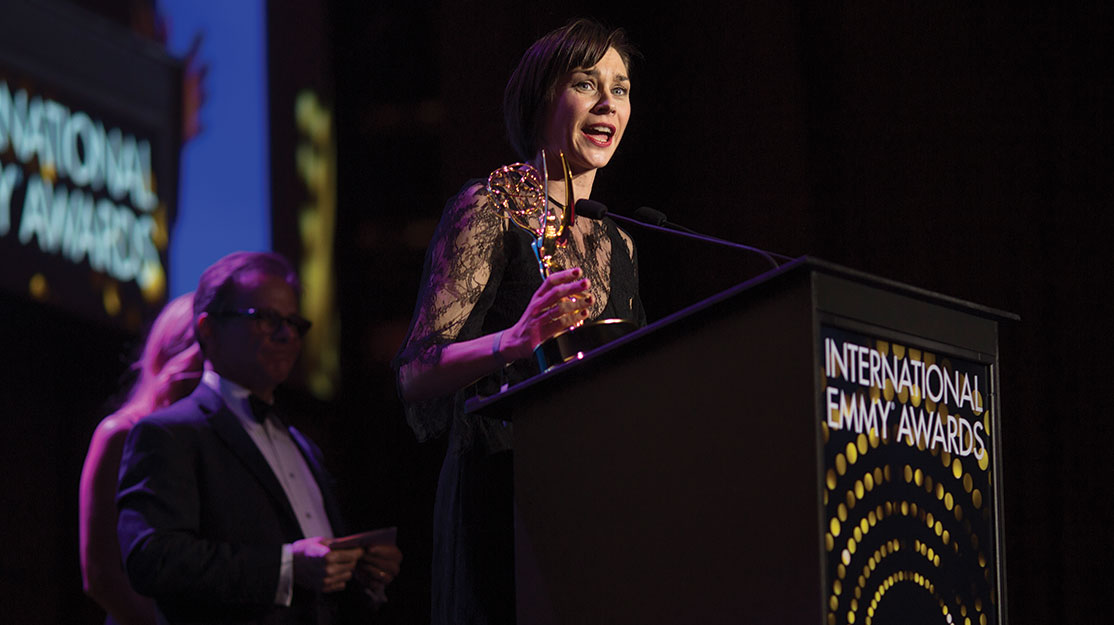 Fresh from her triumph at the International Emmys, Christiane Paul isn’t taking success for granted. She tells DQ about leaving medicine to become an actor and how she chooses her next “adventure.”

Christmas came early for Christiane Paul when she was named Best Actress at the 44th International Emmy Awards. Now at the start of a new year, it’s clear the experiences of that evening last November in New York haven’t faded, as she is reminded of that special night every time she walks into her kitchen.

“That’s where I keep the award,” reveals the German actor. “It’s very heavy – if it falls down, it could really destroy something so the safest place to look at it is in my kitchen.

“When I touch it, I really can remember the feeling I had that evening. It’s really funny. Something lights up in me and I start smiling again. I’m very happy because I never expected it and sometimes I cannot believe I got it. But I have it with me – it’s real! For me, it was not only the surprise of winning the award but the overwhelming response in Germany too. That was very surprising because normally in Germany we don’t often celebrate our own people. That’s not what we’re known for. We’re shy! But it’s very interesting that a lot of newspapers had it on the front page and people in the street were telling me, ‘Congratulations!’ I’m just happy.”

Against competition from fellow nominees Judi Dench (Esio Trot), Jodi Sta Maria (Pangako Sa’yo) and Grazi Massafera (Verdades Secretas), it was Paul’s turn in TV movie Unterm Radar (Under the Radar) that was judged to be the best performance of the year.

The political thriller tells the story of judge and single mother Elke Seeberg (Paul), whose life is turned upside down when her daughter is accused of plotting a terrorist attack in Berlin.

With her daughter on the run, Seeberg’s home is put under surveillance as she investigates what may have led her daughter to be involved in the bombing and comes to learn about a side of her life she knew nothing about.

It is produced by Enigma Film for WDR and ARD Degeto, with Global Screen holding distribution rights.

“Three years ago when I met the director [Elmar Fischer], I knew we had a special script, and a political thriller is not a genre we have so much of here in Germany,” the actor admits. “Normally we don’t have such political movies on TV. So it was special from the first moment. The script gave me the possibility to show some of the things I hope I can do.”

For mother-of-two Paul, the role was particularly challenging as it forced her to confront the scenario of losing a daughter, who at first is feared dead and later is held by police. This also led her to collaborate closely with Fischer on several scenes she felt could be improved.

“In one scene when my character failed to get her daughter out of the jail, I go back to the car and it was written that I leave, but I told the director I would never do that as a mother,” she explains. “I can’t do it. I can’t leave my daughter there, that’s not an option. It wasn’t possible, even if they shoot me, it doesn’t matter. I can’t leave. So there were some changes under discussion during our preparation for the movie.”

That preparation also involved reading books and making a visit to a former GDR (East German) prison, where Paul hoped to understand more about torture techniques her on-screen daughter would face during interrogation following the bomb blast.

“It was very important to go there just to have a feeling of what that means, for my character to imagine what happened with her daughter,” she says. “So I did a lot of stuff. You need this kind of preparation, talking and discussion with the director and maybe the producer and writer, just to get really into it.

“Every project is different because sometimes you don’t need much preparation and sometimes you need a lot. Normally I like to have more than eight weeks, which is a luxury! In the miniseries Unsere Mütter, Unsere Väter [Generation War], I played just a little character, a Russian Jewish nurse who is betrayed and then comes back as a Russian officer. I had only a couple of shooting days but it was so hard to prepare because I had the Russian accent and I had to know about medicine and the Russian army in the Second World War. My experience is that, if you go deeper and deeper, you can discover new things and enrich your performance. But if you are on set, you have to forget that and just act.”

The latter won several awards at the 2015 Grimme-Preis ceremony, one of the most prestigious awards events in Germany. But how does Paul pick her parts?

“I’m looking for what touches me, what inspires me, what I feel as well,” she says. “Sometimes it’s just an immediate decision. I like to work, I like to create something special so I can’t say exactly what [a role] has to be. Of course, it has to be special to me. It can be about who is directing, who is producing. There are a lot of different things to consider when I make that decision.”

She also sees every new project as a “new adventure” and the chance to embody a different character from those she has played before, but says she has no preference when it comes to working in TV or film.

“It doesn’t matter for an actor what format it is so long as it’s a good project or a good character,” she observes. “Nobody would say they prefer more movies or more miniseries if that’s the case. But if you have a TV show, it’s very hard work because you work over a long time. Normally I do films or TV movies so you have 25 or 30 shooting days. But if you make a TV show or miniseries, it can be really exhausting for the whole crew and for you as an actor because you have to keep your character fresh in your mind. It was a great experience for me to join Paranoid and to realise how it feels to work from March until August and have your character prepared for every scene.”

Beyond German series and movies, Paul is now breaking out on the international stage following her appearance in 2016 thriller Paranoid, which was produced by Red Production Company for British broadcaster ITV.

She plays a German detective who comes to work alongside a British police force investigating a murder when their search for the killer leads them across Europe.

“I never expected the chance to join a British show so it was so great to experience that,” Paul recalls, “and nobody knew me there! It wasn’t a holiday but I could just sit there in the corner and wait until my scene came up. I was just Christiane – it was relaxing and there was a lot of respect as well. It was very interesting for me.

“I would like to work there again. The UK has the best actors in the world right now. If you look to Hollywood or see all the biggest shows coming up, they’re all British actors, so I would be very pleased if somebody asked me to work there again. I was so pleased and happy to have that chance.”

It’s all a far cry, however, from Paul’s first career as a surgeon – one she was forced to leave to pursue her acting dream. Having studied medicine, it was while working at the Charité hospital in Berlin in 2003 that she realised she had to decide between acting and surgery.

“I realised I couldn’t do both at the same time – it doesn’t work out well and I wanted to be good in every subject, so I had to make the decision to end something,” Paul admits. “I really wanted to know if I had the chance to be a good actress. It felt to me like there was more passion there, and there was the question of whether I was able to do it. That’s why I made the decision to leave one thing and I left surgery behind.

“In the first years afterwards, it was quite difficult for me because every time I went into a hospital, I felt like I was coming home. Normally in Germany, I don’t like the TV movies or series about doctors or hospitals and I try to avoid them if they want me to play a doctor.”

Now with an International Emmy in her kitchen, Paul is looking forward to seeing what new opportunities present themselves, whether in Germany or elsewhere.

Her most recent project was Ostfriesenkiller, the first instalment in a planned series of films based on the Ostfriesen novels by Klaus-Peter Wolf for German broadcaster ZDF.

She plays investigator Ann Kathrin Klaasen who, in the opening story, must investigate a series of brutal murders. Filming took place in October last year and the hope is that perhaps one or two more movies will follow, subject to the performance of the first when it airs in Germany later in 2017.

Until then, Paul is happy to develop her own projects and see where her career will take her next. She concludes: “I read an interview with [Hollywood actor] Jennifer Connelly who said, ‘It could happen that after winning an Oscar, nobody gets a role again.’ So I hope that after winning the Emmy, that doesn’t happen with me. It’s not a promise for something. So I hope I can make a lot of good projects as I have done in the past and that it will work out in a good way.”