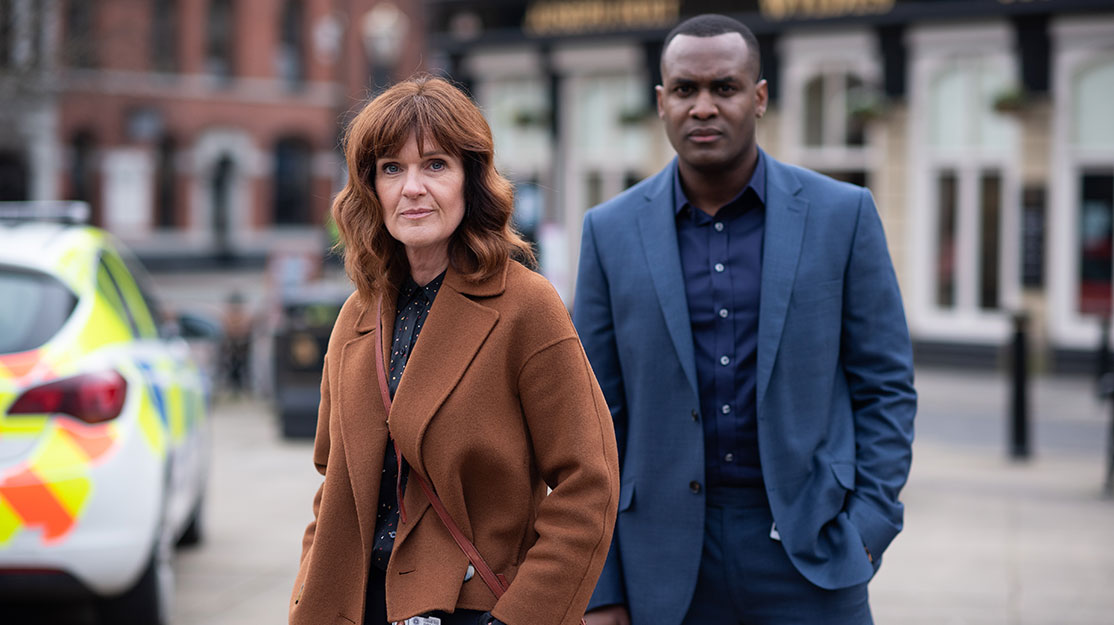 The team behind Netflix thriller Safe reunite for The Stranger, based on Harlan Coben’s mystery novel. DQ visits the set to find out how they reworked the story for the screen.

A pretty, red-brick side road off Bolton town centre has, perhaps, never seen anything quite like it. Cameras, lights and lots of action for a fast-paced story of murder, intrigue and secrets that – most intriguingly – includes the first lady of comedy, Jennifer Saunders, in her first serious role.

This is the set of The Stranger, the latest Harlan Coben project with Red Production Company for Netflix, and once again the casting gives a hint at its ambition. While the team’s last project, Safe, had Dexter’s Michael C Hall as a suburban British dad whose life unravelled when his daughter went missing, The Stranger has a starry cast including Richard Armitage, Siobhan Finneran (pictured above with co-star Kadiff Kirwan), Stephen Rea, Anthony Head and Hannah John-Kamen.

Like Safe, it is set in a heightened world of suburbia where everyone lives in nice houses, and almost all of them have dark a secret. It’s a fascination of New Jersey-born writer Coben, who has sold 70 million copies of his page-turning mysteries set in a fictionalised version of his home state.

Secrets are once again at the centre of The Stranger, which debuts tomorrow and is the first of his Red coproductions (as well as Safe, they also made The Five with him for Sky) to be adapted from one of his books.

The character of the Stranger, a male in the book, is now played by young female Ant-Man & the Wasp star John-Kamen, who for the opening few episodes drops the truth on unwitting strangers. The first of them is solicitor Adam Price, played by The Hobbit actor Armitage, who is told his wife (played by Dervla Kirwan) faked a pregnancy.

The idea, says Coben, came from the discovery of places on the internet that sell fake pregnancy kits. “I read about this going on in the Dark Web and thought it was just incredible and it planted this seed in my head about what happened if you faked a pregnancy and people found out?” he says. “People think they are anonymous when they do things like this, but they are not.

“The Stranger comes into each of their lives and plants a seed that germinates into something really ugly and unexpected. Adam is an ordinary guy who is told this secret about his wife and by the end of episode one she has disappeared and he goes on this journey to discover what has happened to her.”

It is a real action adventure for former Spooks star Armitage, who claims The Stranger is one of the few shows he’s made that he would actually want to watch. “I’ve been in lots of things where I’ve loved acting in it but it’s not the kind of thing I would watch at home, but this is exactly what I would watch,” he says. “It had a brilliant script, a brilliant cast and I get to do lots of action scenes. The whole thing was a no-brainer for me.”

Saunders plays Heidi, the second of the characters to be told a secret; this time about her daughter.

“It was strange at first, not to be playing a role for laughs,” says the actor and comedian, famed for starring in Absolutely Fabulous and her comedy partnership with Dawn French. “But once we started filming and I’d done the first take, I realised it was just like normal filming, only I didn’t have to try to make people laugh. In comedy, you are normally heading for a joke – and when the director says cut, you hope the crew will laugh. Hopefully they won’t in this.”

While fans of the book will have an idea of what happens, Coben, along with scriptwriter Danny Brocklehurst (Brassic, Clocking Off, Shameless) have made so many changes that they have created something almost completely different.

“I know a lot of writers don’t like their books to be changed, but I kind of love it,” says Coben. “It works if you trust the people you are working with. The book is still there but it’s a separate entity. The fun for me is seeing how things change.

Coben is intimately involved with the process from beginning to end. It starts with him and Brocklehurst, alongside producers Nicola Schindler and Richard Fee, having an intense few days of storyboarding ideas. For this production, a whole new storyline involving teenagers – Adam’s kids, who just have small roles in the book – was created, while other characters are brought in that are completely new.

“Safe did really well among younger viewers and Netflix likes shows with a teenage story and I love a teenage story, so it was cool to bring them into it,” says Coben. “We’ve also brought in Adam’s dad, played by Anthony Head.”

In addition, the mysterious character of the Stranger not only changes sex from male to female but is also given her own complicated back story, while Rea’s retired cop, Martin Killane, a client of Adam’s, is also given a much more complete history.

Brocklehurst then goes away and writes the script, staying in regular contact with Coben. “I’d say it was a strange combination of a book adaptation and an original story,” says Brocklehurst. “The start and the end of the book are very similar [to the series] but a lot of the middle section is completely new.”

The action has been transported from New Jersey to England – which means the lacrosse team is now a football one and there are fewer guns – but the story is universal. “As with Safe, you start with quite an ordinary domestic setup and an identifiable ordinary guy,” says Brocklehurst. “But things begin to unravel and you go to completely unexpected places.”

As with all Netflix shows, none of the production team have any idea how successful Safe was – only that they have been recommissioned and, as Netflix has optioned several of Coben’s books, they are hoping for more of the same.

All the writers can do is attempt to coax viewers into watching the next episode. “Of course, whoever you are doing any show for, you want to keep viewers watching. But when you do a show for Netflix, there is a real demand that viewers shouldn’t stop wanting to watch,” says Brocklehurst.

“It focuses you to have momentum building up throughout the episode and then these hooks at the end so that viewers feel like they have to watch the next one.”