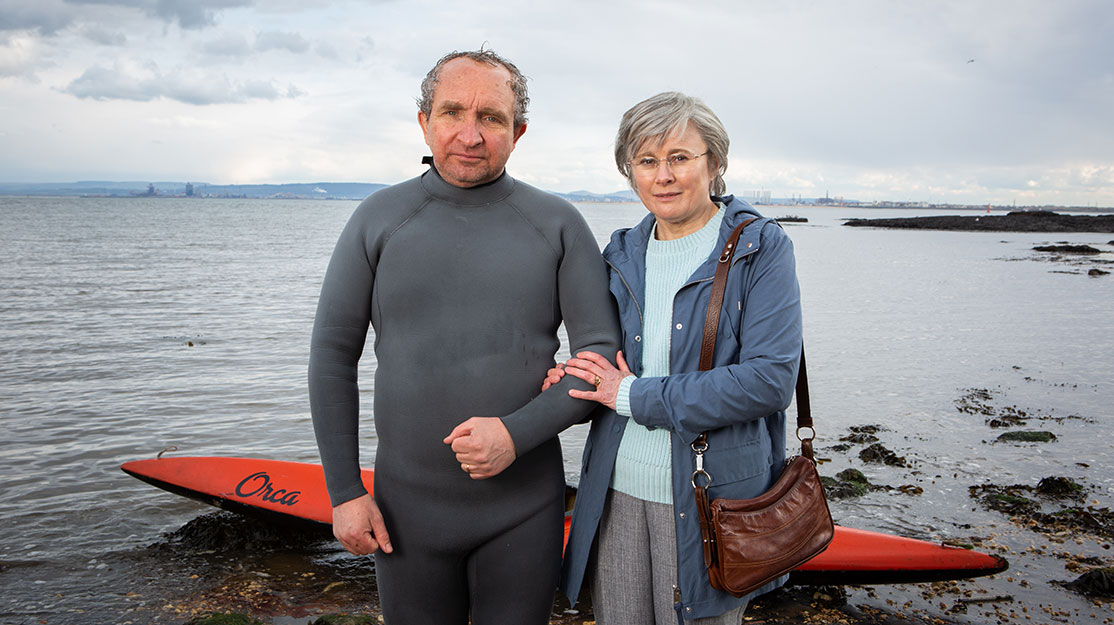 Unforgotten writer Chris Lang was tasked with dramatising the unbelievable true story of a man who faked his own death for ITV true crime drama The Thief, His Wife & the Canoe. He tells DQ how he brought this stranger-than-fiction tale to the small screen.

While memories of John and Anne Darwin may have become muddied with time, for many people in the UK, the mere mention of the word ‘canoe’ is likely to bring them flooding back.

In 2002, John Darwin convinced his wife Anne to help him fake his own death by making it appear as if he had met his end after paddling out to sea in a canoe, in an elaborate attempt to claim his life insurance and avoid bankruptcy.

But for the deception to succeed, they had to convince friends and family – including their two sons – as well as the police and insurance companies, that John had indeed disappeared while canoeing off the coast of Seaton Carew, in England’s North East, where the couple owned two large neighbouring properties facing the sea.

With the couple facing spiralling debts, Anne eventually went along with the scheme, with John lying low as the police carried out their investigations after they discovered the wreckage of his canoe. Then when the coast was clear, he returned to live in one of the bedsits next door to the home he shared with Anne.

The couple eventually decided to start a new life together in Panama City – until their secret was exposed by a now infamous photograph of them taken in a Panama real estate office in 2006. Both were later jailed for more than six years.

The story is now the subject of a four-part true crime drama, The Thief, His Wife & the Canoe, which began on UK broadcaster ITV on Sunday and concludes tomorrow.

“If I pitched this as an original story, no one would have bought it,” screenwriter Chris Lang tells DQ. “They would have just said, ‘No, come on now, you’re pushing it. This is too far-fetched.”

Lang is no stranger to crime drama, having written shows such as Innocent and four seasons of acclaimed series Unforgotten, with a fifth now in production. When he was first pitched the story of the Darwins, he immediately remembered news stories about “the guy that paddled out to sea in a canoe” and was drawn to what he describes as “an incredibly complex story with a huge amount of character movement and narrative events.”

“It’s just a story that just keeps developing and developing, with ever more absurd twists and turns,” he continues. “But the basic story is about a man who persuades his wife to join him in a plot to fake his own death by paddling out to sea in a canoe. Then he lives next door, a strange, hermit-like existence, for four or five years before they then decide to make their fortune in Panama, until the plan unravels there for lots of complicated reasons.”

While the gist of the story may be well known, Lang says what fascinated him most about the case were the little details, such as the fact John even contemplated returning to the small town where he lived once he had carried out his ‘death’ in the perfunctory disguise – beard, glasses and hat – which he wore to remain undetected when he left his bolt hole.

He even secured a fake passport and flew across Europe and around the world trying to find somewhere the couple could live. Then when his plans in Panama were held up by local regulations, he hatched a new scheme to return to the UK and declare he had been suffering from amnesia for many years – a plan that was soon scuppered when the photo emerged.

The writer jokes that The Thief, His Wife & the Canoe may be one of the fastest and easiest commissions he has ever won. The show was developed over the course of the first UK Covid-19 lockdown in 2020, with Lang immediately signing on after a conversation with executive producer David Nath and script executive Jake Lancaster.

He then suggested they take it to ITV, the home of Unforgotten, where head of drama Polly Hill quickly ordered a script and then greenlit the project in a series of Zoom meetings. Development and script meetings took place entirely online until the production team finally met in person for the first time in October 2020. The series is produced by Story Films (The Interrogation of Tony Martin) and distributed by All3Media International.

“The really unusual thing about this is it’s an incredibly muscular story. It’s profoundly sad and tragic and yet it is also very funny,” the writer says. “It’s a story of incredible contrasts: the contrast between the two worlds, Panama and Seaton Carew, and the contrast between tragedy and comedy – and they coexist often literally minutes apart. You’ll be laughing and then you’ll be crying. That really appealed to me as a writer because I don’t often get the chance to flex those more comedic muscles; I’m much better known for the darker stuff.”

Lang based the series on a manuscript written by David Leigh, who was the first journalist to find and interview Anne in Panama. That gave him a chronology of events to follow, while thousands of pages of court transcripts and police interviews gave him a legal insight into the case. He also used interviews the family did with the media to pick up additional details, particularly relating to how the couple’s sons Mark and Anthony coped with their parents’ betrayal.

But the writer’s main focus was getting inside the heads of the two protagonists – played by Eddie Marsan (Ray Donovan) and Monica Dolan (Appropriate Adult) – and trying to understand not just why they did it but how they could have deceived their family so horribly. Notably, the series follows events from Anne’s perspective, with the character’s narration allowing viewers to hear, if not understand, why she did the things she did.

“John was easier to understand because he was a narcissist and his motivation was very clear,” Lang says. “But right from the off, I thought she was the harder character to understand and, therefore for a writer, the more interesting one.

“His story is quite uncomplicated in many ways, whereas her story is extraordinary – from being a somewhat dominated and coerced wife, entering into this extraordinary plot and lying about it even when she was arrested, to being imprisoned and then beginning to rebuild her relationship with her children through her contrition and her acceptance of the appalling crime she committed against them.”

Pre-production during the pandemic, particularly in the period before Christmas 2020 when cases in the UK were on the rise again, was “stressful,” says Lang, who is also an executive producer on the project. One key issue was finding a very specific location – two houses next to each other with interconnecting doors – and getting the homeowners to allow a film crew inside. Understandably, people were very nervous about that prospect, so eventually the team took the decision to build the houses at Elstree Studios.

“It was absolutely the right decision because it gave us total control over the environment,” he notes. “It just gave us so much freedom, and the designer was able to do exactly what they wanted to do in the house. I defy anyone to spot the join between the houses and looking out of the window to the real Seaton Carew where we also filmed the exterior shots.”

The international leg of the shoot, where they would record scenes set in Panama, was also beset with Covid-related problems. A pared-down cast and crew were set to shoot in the Dominican Republic when, a day before they were due to leave the UK, the destination was put on the government’s restricted red travel list. Flights from the UK were cancelled and those already in the Dominican Republic had to fly home.

Editing began on the series without those scenes set in Panama, and the production had to wait until a break in rising Covid cases before they could remount the show in Portugal.

“It doubled brilliantly for Panama,” says Lang, with scenes set in Panama ultimately opening the series. “But it wasn’t without its challenges. I’ve shot now four shows in Covid times with Covid protocols, and every time I go on to a new shoot, I think, ‘Oh well, this will be the one where it will be finished and it will be back to normal.’ But not yet.”

The notoriety of ‘Canoe man’ may mean some viewers think they already know this story. But Lang believes people watching the series will be just as “aghast” as he was when he first read research around the case.

“Every time I turned a page, I was like, ‘Oh my god, I can’t believe that happened,’” he says. “I would tell anyone who is thinking of sitting down and watching it, you’re in for a rollercoaster ride.”