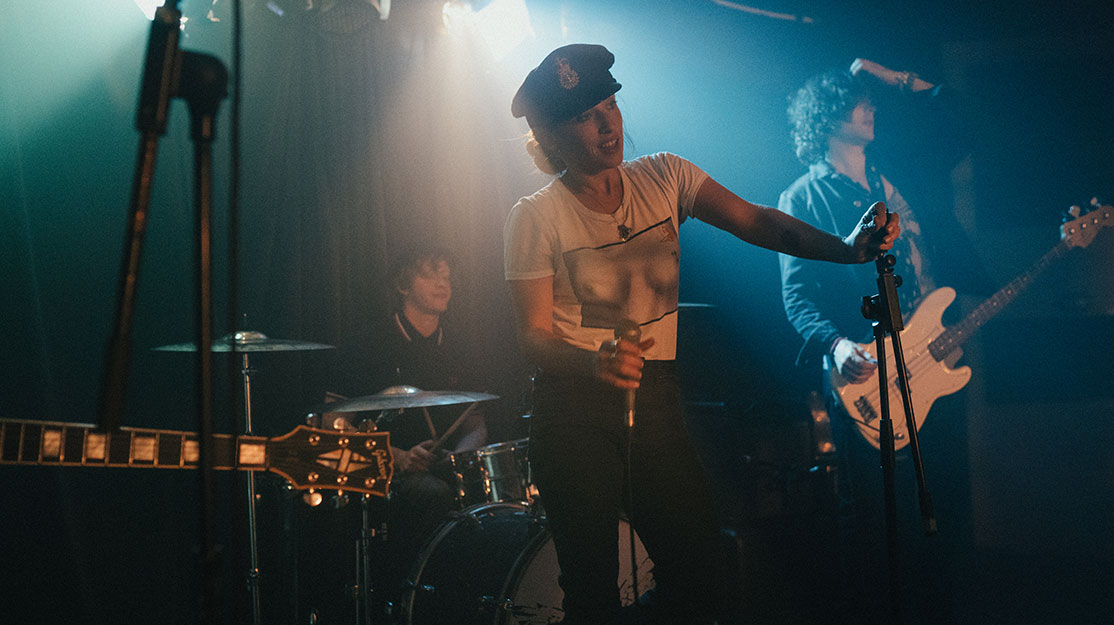 Straight from The Heartless

Screenwriter Lucie Barât and her brother, The Libertines co-frontman Carl, are behind a music drama showcasing Britain’s indie scene in the early noughties. DQ spoke to the siblings about developing the show with RubyRock Pictures’ Zoë Rocha.

As the lights go down and the crowd sways inside London’s glamorous St Pancras Hotel, the stage is set for a unique performance. A short film introduces rockers The Heartless getting ready for a gig, only then for the four-piece group to step out onto the stage and roar into their set.

As a launch party, it certainly makes an impact. But it isn’t designed to simply showcase another band making an assault on the charts. Instead, The Heartless are the focus of an upcoming drama series, created by screenwriter Lucie Barât and her musician brother Carl, the co-frontman of UK rock band The Libertines.

The show, also called The Heartless, is described as a semi-autobiographical representation of the British music scene in early noughties London, recounting both Lucie’s experiences from that period and those of Carl and his band.

Lucie, who previously wrote on Canal+ drama Spotless, says that for several years she had been mulling the idea of a biographical drama set during the time when she and Carl shared a flat.

“That time is quite pertinent,” she tells DQ. “The noughties is a time before the internet [became integral to everyday life], where there was the whole 2k thing, leaping between centuries, the Labour Party came in [in the UK]. We were in our early 20s and something exciting was happening in the indie scene off the back of all those manufactured boy bands.

“Everything felt a bit tired at the end of the 90s. [Before that] it was just an exciting time, and it’s going to go down in history as a very important time because it was before the internet.

“In terms of being a young person at that time – an angsty, angry young woman – writing about a character like that was quite cathartic. I had to leave it on the back burner until a time when I could reflect on that. I remember it being quite an apathetic society for quite a long time, and now we’re at a point where we can look back and reflect on those issues.

“We’re also so absorbed with social media; there’s a whole generation of people who have grown up with the internet and we’re looking at how that’s affected people, but also dialling it back to young people with aspirations and dreams and how different it was then for us.”

The early 2000s saw Lucie leaving drama school while Carl found major success with The Libertines. “What’s interesting for me is that time is becoming a ‘period,’” Carl notes. “Culturally, we’ve changed so much. We’ve become so obsessed with being tied to a handset and communicating with everyone by looking at a block.

“If you’re into Nirvana, you can go deeper into Nirvana by finding out Kurt Cobain’s influences. To do that back then, you’d have to write off to magazines and fan clubs or search archives. Now, at the click of a button, you can find out all those things instantly. There’s no mystery or myth in that, so there’s a great romance to the pre-social media world.”

Lucie and Carl are now using social media to their advantage, however, connecting with potential fans of the series ahead of its release via an Instagram page dedicated to the band. Their first song, Heartless, is also available to stream on Spotify, with the show’s original soundtrack penned by Lucie and Carl.

In the series, the band’s story isn’t simply about a dramatic rise to fame and fortune. Along the way, they are confronted by mental health problems and crises of identity, while also being forced to face up to the struggle musicians face in their bids to make it big.

“All of that’s there – being on the dole, pounding the streets with no money to drop off demos,” Lucie says. “We start with all of that and then the band becomes successful, but there’s a bunch of characters left behind and we also see how it affects that group of people. There’s a sudden stratospheric rise, and [we look at] how that changes the dynamics.

“I finally found my way into telling this story by inventing a neutral character that comes in. She’s not from that world and we see that world through her eyes. At that point, I was thinking, ‘I’ve cracked it.’ This is something that isn’t just a version of my diary, which was hard to pull away from at first. That’s when I said to Carl about writing the soundtrack with me and he said, ‘Absolutely, I’d like to be more involved than that.’ So I shared the script with him.”

Carl picks up: “I have a certain ownership of the story as well. We’ve got a lot of memories about that time together in our flat. I wanted to be involved in the story; I’ve been wanting to work with Lucie for ages. We’ve both been living parallel lives and, for some reason, they’ve never met. It just seemed like an amazing project worth clearing my diary for.”

The series follows Sally (Ella-Rae Smith, Into the Badlands), who returns to the UK after a year in Australia and finds herself thrust into the hedonistic, high-intensity world of her childhood friends, siblings Asher (Lewis Rainer, Death Comes to Pemberley) and Anna (Hannah Dodd, Harlots).

Asher is in rising indie band The Heartless, which is fronted by the volatile Marion (Ellie James, Giri/Haji). The group is on the cusp of making it big, but the chaotic trio are always one step away from tearing everything apart.

It was the creators’ personal connection to the material that also made it stand out for Zoë Rocha, founder of RubyRock Pictures, the fledgling prodco developing The Heartless with Lucie and Carl. “As a producer, you want to work on projects that have a really authentic point of view on something, otherwise why bother? The audience can see through something that doesn’t feel real.

“When we were talking about it, Lucie wanted to make it feel really identifiable, but it’s all her experiences. And while the music element is important, those are only some characters. You are dealing with mental health, addiction and sexuality and all of those things within that world. It’s definitely not a sugar-coated way of looking at it.”

The teaser shown at the launch party introduced Sally and Anna, who make their way to a club to see The Heartless perform. Rocha says they made an early decision to shoot the short film as a “proof of concept” demonstrating how the music could interact fluidly with the drama.

Before then, and even before story outlines were put to paper, casting was completed so the writers had the luxury of creating characters around the actors who would play them.

“We wanted the band in the show to record the music Carl and I wrote, so then that became the idea of ‘why don’t they actually become a band?’” Lucie says. “We ended up doing a lengthy casting. Rather than actors playing rock stars, it was really important to us to be credible. We thought the best way was to make them a band, get them to do gigs, take them to a recording studio, do all of those things.

“We managed to do all of that with them before we shot the teaser, so by the time we shot it, they were so relaxed with being on stage, the song they were singing, that they are a band and they come across as a band, not actors with instruments. Having the luxury of that was amazing. Casting the other main characters, we didn’t stop until we found the right people.”

“I’m of the belief that if you have the right casting for the musicians, they’ll evolve and become their own thing,” Carl notes. “Maybe some suggestions like a leather jacket here, don’t put your foot on the monitor… But essentially I’m a firm believer in the chemistry and them evolving together. Pushing them out on the road, they’ve now done gigs independently.

“Zoe’s been really brave as a producer. Music and TV often don’t work; it’s very hard to get them together. But to allow the band to be organic and done in that way is really interesting. I’ve had to turn my TV off many times when people have tried to do this and it goes wrong. This does feel different. Largely, I’ve left the band to their own devices, apart from pressuring them to rehearse more.”

Living in a “post-X Factor world,” where the latest musicians are just as likely to be found on television as they are performing in clubs, Carl admits it’s “a different time.”

“The hardest thing is where things used to be black and white, things are so mixed and integrated, it’s hard to tell what’s good and what’s not good,” he says. “No one really fucking knows. There’s not something people can kick against. It’s a very different scene. It feels like the Wild West, but then it felt like the Wild West then.”

Since the band was first launched, they have released a single, produced a music video and gone on tour, which Rocha says will be filmed for a documentary to accompany the series. Just don’t confuse The Heartless with Spinal Tap.

“The characters Lucie’s creating are really fascinating. There aren’t that many shows being made here [in the UK] today that can deal with all those subjects, but we see it in the US all the time with shows like Euphoria,” she says of HBO’s series about a group of students who navigate love and friendships in a world of drugs, sex, trauma and social media.

“I want everyone to fall in love with these characters and have the series reflect what the younger generation is feeling today that isn’t necessarily being shown to them, yet with the fun of the music alongside it.”

Carl adds: “I want people to identify with it and for it to reflect their own journeys. I want people to see what you can achieve by just getting together. You don’t need anything, just like minds and dedication.”