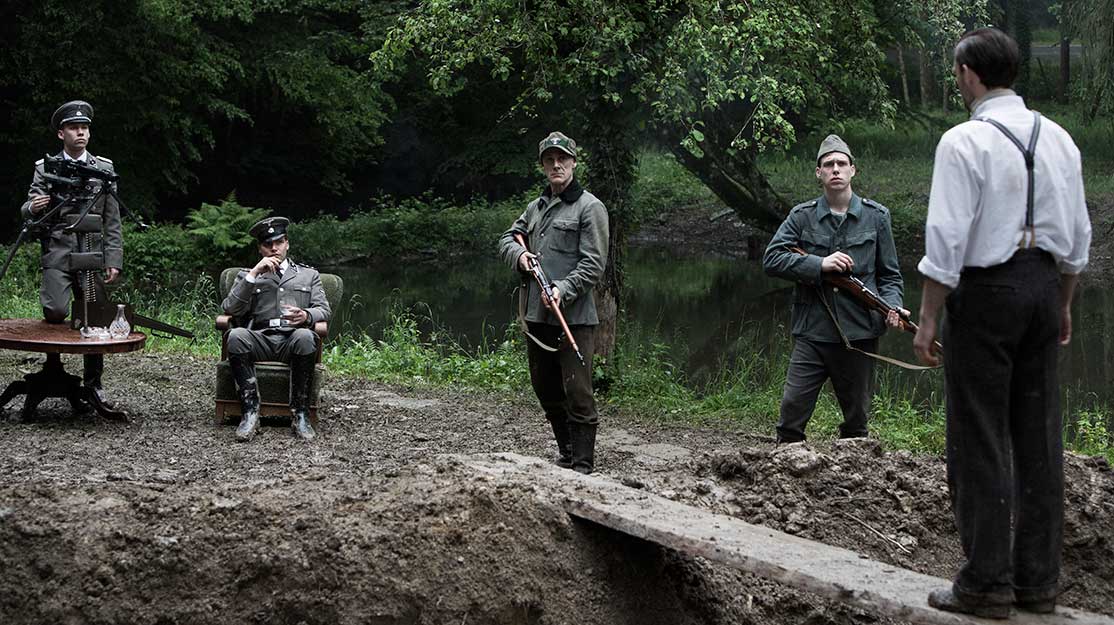 Sticking to the truth

Dutch drama The Body Collector recalls the real-life account of a journalist attempting to uncover the truth about a war criminal.

The dark past of a former Nazi is explored in The Menten Case (aka The Body Collector), a three-part Dutch drama based on a true story.

The miniseries, which was commissioned by Omroep Max, centres on investigative journalist Hans Knoop, editor-in-chief of newspaper De Telegraaf, who becomes personally involved in the hunt for Nazi war criminal Peter Menten.

When Menten auctions part of his famous art collection, the news is picked up by Israeli journalist Chaviv Kanaan, who accuses Menten of executing Jews, including some of his family, in Poland during the Second World War.

From that moment, Knoop begins his search for the truth into the art collector’s dark past – but Menten refuses to go down quietly.

Based on Knoop’s own book, The Menten Affair, it is written by Robert Jan Overeem and Jan Harm Dekker and directed by Tim Oliehoek. The distributor is Dutch Features Global Entertainment.

What are the origins of the drama?
We were put into contact with Hans Knoop and got intrigued by his story. The Menten Affair was a huge issue in the 1970s in the Netherlands, but through the years it has slipped away in collective memory. We believed the story was too important [to forget] and that it had the dramatic elements to make perfect television. So we dug into the book Hans wrote about the subject and started developing the script together with our broadcaster Omroep Max.

How would you describe the writing process?
The writers, Jan-Harm Dekker and Robert-Jan Overeem, worked closely with us and director Tim Oliehoek to work on a miniseries that is close to the events, but also retains a suspenseful feel. We wanted the series to honour investigative journalism because we believe this is exactly what is necessary nowadays. Hans Knoop read our work closely to make sure the story was truthful and stuck to the facts.

How was the style and tone of the series created?
We believed that often the problem with period pieces is that attention drifts away from the story and gets into the fun of dressing up or trying to look the part. We wanted the series to be about the story itself and about the effort Hans made to uncover this horrible truth. We’re proud that when Hans finally saw the result, he said to us: “When I was investigating the case, I had no time to get emotional about it, but as I now see it in the series, I realise what it has meant.”

Who are the lead actors and what do they bring to their characters?
Guy Clemens plays Hans Knoop as a man who, while digging deeper into the subject, turns from a friendly father into a fierce pitbull who does not let Menten slip away. Aus Greidanus Sr plays an ice-cold version of Pieter Menten, the war criminal – a man who possesses charm yet is extremely intimidating at the same time. He keeps the audience doubting how guilty he might be. Carine Crutzen plays Meta, Pieter’s wife, who believes [in her husband’s innocence] and sticks by his side before and after the judges have ruled. The beautiful Noortje Herlaar plays Betty Knoop, who is intimidated but never lets her husband Hans down, even though he is willing to sacrifice his safety and his career to put Menten behind bars.

What were the biggest challenges producing the series?
The biggest challenge of producing a series about investigative journalism is to keep the tension and suspense going, even though [many viewers know the real-life outcome]. By inventively and cinematically crossing between the pre-war and war periods and the 1970s, we were able to keep the emotional connection with the characters and the case. It was a challenge to keep the balance between too many flashbacks or too many talking heads.

Where does your series fit into the drama landscape in The Netherlands and how is the industry changing?
The Body Collector is a high-end series and fits in with the public broadcasters’ wish to make drama out of journalism. With The Body Collector we have shown that the Netherlands is a country where emotion and suspense can go together with a story that sticks to the truth.