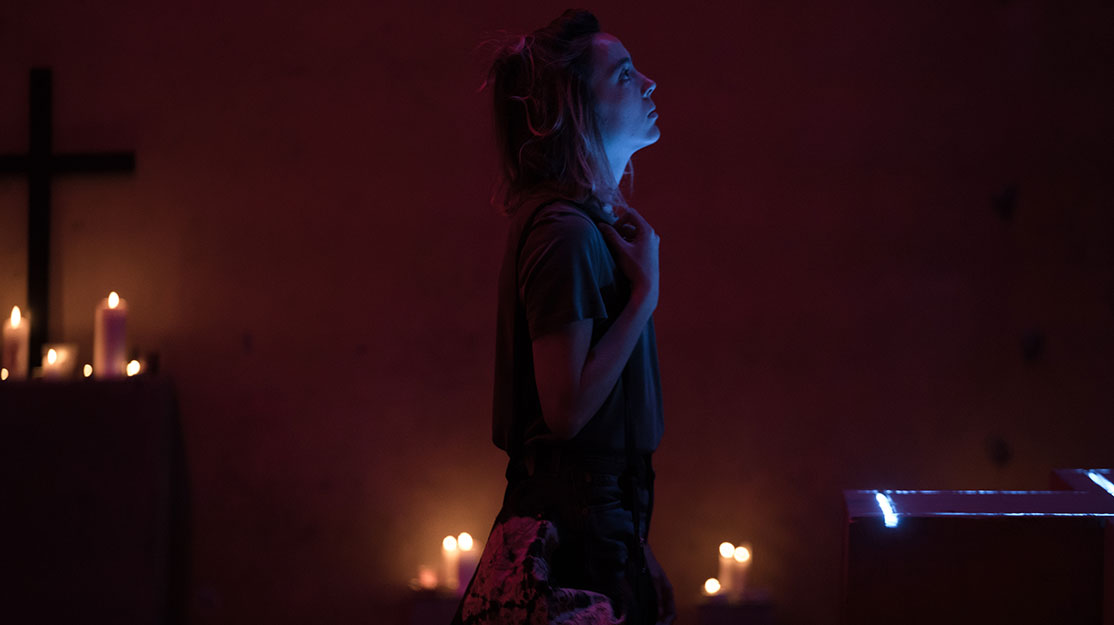 Writer-director Thomas Cailley introduces DQ to Ad Vitam, a French sci-fi thriller in which two detectives are tasked to investigate a mass suicide in a futuristic world in which death has been ‘cured.’

Described as a mix between Korean crime film Memories of Murder, seminal sci-fi movie Blade Runner and iconic TV drama The X-Files, French thriller Ad Vitam is set in a futuristic world where everyone believes death has been ‘cured.’ But what happens when the bodies of seven youngsters are discovered – apparently the participants of a mass suicide.

Produced by Kelija for French-German network Arte, the six-part series is distributed by Lagardère Studios Distribution. Ad Vitam screened earlier this year at Séries Mania in Lille, France, and today it will be shown at the Toronto International Film Festival in Canada.

How would you describe the story of Ad Vitam?
In a world where death is thought to have been conquered, young people are finding it harder to find their place. Darius, a 120-year-old cop, is investigating the collective suicide of a group of minors. Was it a death pact, a political act, a cry for help from a desperate generation? Darius heads up the investigation and takes Christa, a suicidal young rebel, along for the ride on this voyage of initiation to the depths of a world drifting toward eternity – or oblivion.

What are the origins of the series?
Today, life expectancy in France is 82, well beyond the biological barrier we thought was unsurpassable only decades ago. Co-author Sébastien Mounier and I became interested in this desire for life extension, the far-fetched promises that come with it, and frightening transhumanist prophecies that consider death an anomaly, a disease that can be cured. Family, work and relationships would all be redefined. Among the countless questions raised by the promise of immortality, one seemed crucial to us: what place do young generations inhabit in a world where people don’t die? Can a civilisation survive without renewing itself, without evolving? It was this mind-boggling, existential malaise that we chose to explore.

How did you blend elements of science fiction with the hard-boiled crime genre?
We wanted to situate Ad Vitam at the crossroads of several genres, blending crime thriller, sci-fi, fantasy and occasionally comedy. The advantage of the crime thriller, and of hard-boiled crime in particular, is its porous nature. It’s a very ‘impure’ genre that allows for lots of things: to question and critique social order, develop complex characters and combine action with a kind of reflection, of poetry. The sci-fi setting as a backdrop makes the story stronger and the metaphor clearer. It allows for more candid questions about youth, death and passing down between generations.

What type of world did you want to create? What rules did you put in place for the characters and society at large?
We wanted it to be a world that was democratic and full of life – in other words, a world that asked itself questions. It is not a pure dystopia where an overpowering authority lays down the rules of the game, in the process confining the characters and reducing the metaphor to a societal game. We took this simple question as a starting point: if tomorrow we found a way to defy death, and it was sold at the local drugstore, who would we be to reject it? We wanted the regeneration to be a free and personal choice. In other words, a moral choice, accompanied by mind-blowing questions like is a person who doesn’t grow old still a person? Does eternal life still have meaning? Does death define one’s humanity?

How was the story developed with Arte?
We sent Arte a 30-page concept pitch, with elements of the synopsis, character backgrounds and a rough idea of its visual and stylistic world. Arte encouraged us to continue. When we sent them the pilot script, that’s when they decided to get on board. After that, we started a series of regular exchanges with them, about the drama and plot as well as our vision of the central themes of the series (the question of death and youth). It took a year-and-a-half to develop it.

How would you describe the writing process?
As organic as possible. Here again, we took the characters as the starting point. Who is Darius? What does it mean to be 120 years old? What does he need from Christa? What does their encounter stir up in them? How do their visions of the world differ? Do they still have anything to transmit to each other, in a world where there is nothing to transmit? And so on. The criminal intrigue followed, twisting its way around their personal journeys. Sébastien and I agreed we didn’t want to impose a preordained structure or story on the characters. Instead, we let the characters guide our writing, without planning ahead what would happen, which is why the ‘codes’ of this new world are not all set out from the start in the pilot. We learn how the society works as the story progresses. We wanted the adventure to be immersive, for their world to be revealed in depth, layer by layer. Evil does lurk in the shadows of this world, but it takes time to show its true face.

What style or tone were you aiming for and how did you achieve this?
We wanted to have the investigation unfold like a journey; a journey of initiation and of the senses. It is experienced by the characters and, I hope, by the viewers as something physical and philosophical, but also like a trip. To sum up, I’d say Ad Vitam is a cross between Memories of Murder, Blade Runner and The X-Files.

How was music from HiTnRuN used to enhance the drama?
I had already worked with HiTnRuN on my first feature, Les Combattants. I had really liked their sound and their approach, which combines electronic and analog music in a very natural way. Electronic music can often sound cold and automatic; this isn’t the case with their music.
Generally, we agreed never to have atmospheric music. Music is either there or it isn’t, but when it’s there, you can hear it. It doesn’t hide and it’s never used to fill a silence.

What were the biggest challenges on the series?
Apart from two sequences, the entire show was filmed in real locations. That’s about 100 different sets for the six episodes. We tried to limit our use of green screens as much as possible. It was a necessary choice to make the story and its world as real as possible. The special effects naturally served to enhance the whole. But in terms odf creating worlds and decors in the abstract, we had neither the means nor the desire to do so. It’s something you can always sense in the end; it derealises the action and saps the emotion. I think to create and develop a complex, living world, you need to start with complex, living matter.

How does Ad Vitam stand out from other dramas in France?
Yvan Attal and Garance Marillier! In their first series, Yvan brings to Darius all his charisma, intelligence and a strength that the camera immediately latches on to. Garance brings to Christa her intensity, instinct and stunning determination. Yvan and Garance together form a character and actor duo that is unexpected yet utterly evident. And we are lucky that they are surrounded by a great many talented actors: Niels Schneider, Ariane Labed, Rod Paradot, Hanna Schygulla, Anthony Bajon, Vassili Schneider…

How does the series appeal to an international audience?
Sci-fi and genre fiction in general allows for the development of powerful metaphors, and the building of an imaginary world that surpasses local particularities. I hope our series has all these strengths. Ad Vitam is French in its cast and language but universal in its themes and their portrayal.

How is French drama opening up to new genres and stories such as Ad Vitam?
It’s been a few years since a wave of freedom hit French television, and the boundary between film and TV has become blurred. Actors, directors and writers easily switch from one to the other now because they understand that television offers a creative space for truly exceptional projects, stories with very bold creative choices. There’s a real hunger for this genre in France, from both creators and viewers.