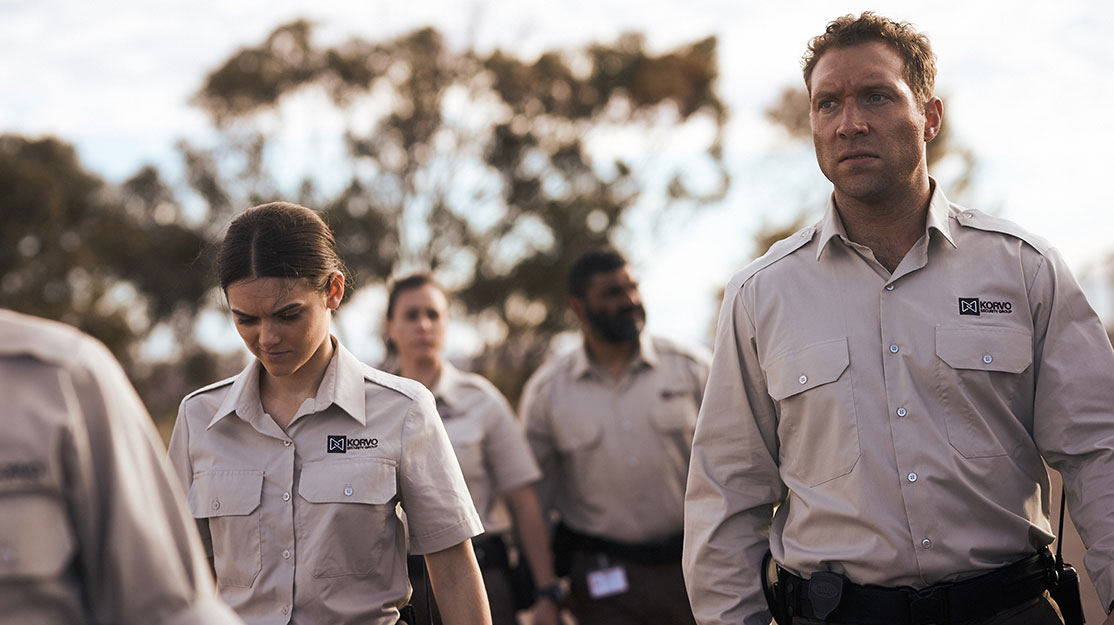 The cast of Australian drama Stateless recall the emotional journey on which they embarked for this story of four disparate characters who find themselves in a detention centre.

Pitched as a powerful and timely series, six-part drama Stateless uses a star-studded cast to tell a story about four strangers whose lives collide at an immigration detention centre in the middle of the Australian desert.

Yvonne Strahovski (The Handmaid’s Tale) plays free-spirited flight attendant Sofie, whose life begins to unravel after being seduced by a self-improvement group’s charismatic leaders, played by Cate Blanchett (Carol) and Dominic West (The Affair). When she quits her job, she later turns up at Barton Immigration Detention Centre claiming to be Eva Hoffman.

Jai Courtney (Suicide Squad) portrays Cam, who is struggling to provide for his young family until he signs up to work at the centre as a guard, though he finds his attitude is at odds with his co-workers who treat the detainees like criminals, testing his morality and his conscience.

Ameer (Fayssal Bazzi, The Commons) is fleeing persecution with his wife and two daughters, seeking safe passage to Australia. When he is separated from them by people smugglers as they try to board a boat heading to their destination, Ameer is next seen arriving on the shores of Christmas Island, where he is transferred to Barton before learning what has become of his family.

Then there’s ambitious bureaucrat Clare (Asher Keddie, The Cry), who is appointed as the new general manager at Barton in response to the growing media scrutiny surrounding the centre. She soon discovers she is completely unprepared for the challenges ahead, particularly when she discovers Eva is actually an Australian.

Strahovski first heard about the part of Sofie when she was contacted over email by series co-creator and executive producer Blanchett, who then relayed her personal passion for the issues confronted by Stateless and the story itself in a subsequent phone call.

“I ended up reading the scripts and falling in love with how they were written and how beautifully these stories were told,” the actor says. “The relatability factor is something that’s especially important for a script like this, because it is such a sensitive and dividing issue, especially for Australians. I think it’s so lovely to have so many storylines that are so relatable, littered through this one big piece.”

The multiple perspectives and relatable characters were also key to drawing both Courtney and Keddie to the series.

Cam, says Courtney, might have been a more functional character in another story. “But his unravelling over the course of the series is truly heartbreaking,” he says. “When I got to read some of the scripts and see where things were going, I leapt at the opportunity to take that challenge on and to represent someone who’s in a community of people where this sort of thing is devastating – the welfare of the guards, the lack of support, lack of funding, lack of training. That was something that I found kind of fascinating and wanted to learn more about.”

Keddie picks up: “Quite often as an actor, you’ll have a handful of really good, solid reads of a film or TV series that you’re making, and then really have to knuckle down into the work of your own character. When I was working on this, each night that we were filming, I would just keep reading the other journeys, Cam’s in particular. You get so immersed in the guards’ story. It’s such a wonderful perspective to have.

“When I first read the script, to be perfectly honest, I felt mildly frightened by the idea of playing a bureaucrat and someone who had been working in government for 20 years. My ignorance played into that fear as well – I’m not a political animal. I probably am much more now that I’ve made this show. I’m nowhere near as lethargic as I used to be.

“However, the attraction was also because I knew next to nothing about the complexity of the situation. I thought it was a really interesting time to explore in Australia because I don’t think Australians knew what the hell was going on when it was happening. It sits in the recent past, but it’s so present now and it’s so timely because it’s happening all over the world. It’s a discussion that’s more relevant now than it ever has been.”

Though the stories of the four main characters appear quite singular, they do collide as the story progresses, with the emotional and mental toll on each becoming increasingly clear.

“It just humanises the people behind it,” Courtney explains. “It doesn’t take a stance necessarily on policy or anything like that. We’re not telling the audience to feel a certain way. It’s just putting faces to those stories that otherwise people might just think of as statistics.”

Keddie adds: “It’s so complex, but the way it comes together later in the project is that all four perspectives really marry beautifully. It’s incredibly moving.”

Talk to West, meanwhile, and you’d be forgiven for thinking he’s starring in a different show. While episode one largely focuses on Ameer’s journey to reach Australia and introduces Cam, the story also reveals how Sofie becomes infatuated by GOPA (‘Growing One’s Potential Achievement’) and its husband-and-wife leaders Gordon and Pat. Despite the initial singing, dancing and eye-catching outfits, it soon becomes clear Sofie has become hypnotised by a cult. Then matters take a decidedly dark turn, forcing her to flee the group and ultimately land at Barton with a mysterious new identity.

West came to the project at the last minute, having received a message from Blanchett while he was filming the final season of The Affair in Montauk, at the tip of New York’s Long Island peninsula.

“I hadn’t met her before and she said, ‘Come and do this thing.’ I thought, ‘I’d love to do anything with Cate Blanchett, that’s marvellous,’” he says. “Then she told me a little bit about it. It seemed a very intriguing project. I went out to Adelaide and I was done in 10 days. So it was quite easy, really.

“It was interesting what she said to me when we first spoke, saying that in her glittering, amazing career – and we’re sort of the same age – now she’s keen to spend her life doing important things that contribute in some way to the debate of the big issues. That really struck me as a wonderful thing to be thinking of and something that I need to think about.”

West describes Gordon as a “psycho” and “a deeply mediocre man who’s given immense celebrity and credibility by his disciples, and there’s a lot of those people around.”

He continues: “It’s amazing how much influence you can have on people’s lives if you say, ‘there, there’ and make them feel wanted and needed. We all need that, we love being told that, and manipulative people like him are able to tap into that.”

The actor, who also starred in HBO’s seminal crime drama The Wire, agrees the beginning of the story disarms viewers about what’s to come. “That’s what great drama does, particularly episodic drama,” he says.

“Mainly because of the outfits and the ludicrousness of it, it was funny because Gordon and Pat did remind me and Cate of our experiences of drama school and the sort of nonsense that people talked. It was very reminiscent of that. So I felt I knew it very well. But mainly because of what Cate and I were wearing and the comedic elements of it, I was a bit worried we were doing this comedy in the middle of this huge tragedy. It’s still a bit like that, but it does work.”

Elise McCredie, who co-created the series with Blanchett and Tony Ayres, says the idea was to bring people into the show “by stealth,” because it’s not initially what you might expect from a story about an immigration detention centre. “We get you in with an all-singing, all-dancing Dominic and Cate,” she jokes.

McCredie (Jack Irish, Nowhere Boys) and Blanchett went to school and university together, and it was in Blanchett’s kitchen in 2014 that they first talked about the themes and ideas behind Stateless, which is produced by Matchbox Pictures and Blanchett’s Dirty Films.

“I’d been writing a lot for TV and so we just started talking about ideas and things that we might do together,” she says. “Immigration detention was a very hot topic at the time in Australia and it was a very political. So we both felt very passionate about it. We were talking about whether, as dramatists, storytellers and artists, we could contribute to the debate around that issue without being didactic. Once we settled on a bit of an idea, we brought in Tony and then we started to workshop further.”

McCredie says they never intended for the series to be “gritty or realist,” instead imagining it as colourful and with a whimsical quality. She wrote four episodes, with Belinda Chayko (Safe Harbour) writing two, while the pair spent almost four years on and off developing the story with Ayers (Glitch, Clickbait).

The series was originally going to comprise just four episodes, but extending it to six provided time to develop the characters more fully.

“When it was four episodes, it went like the clappers but you didn’t feel as much,” Ayres notes. “When we put a little bit more space in, particularly for both Cam and Clare, it helped with the emotional effect of the show. It’s like a relationship drama set in a detention centre.”

Once production was underway, filming largely took place chronologically in a specially built detention centre set outside of Adelaide, which meant the actors didn’t have any trouble finding the emotion of their characters and the story.

“[The set] may just sound like a space to talk about, but when you’re inside it and surrounded by 100-plus extras, a large majority of whom experienced detention for many years, walking into that each day never became easy. It felt more authentic to me because of the incredible preparation of our writers, directors, producers and art department to create something so oppressive,” Keddie explains.

Courtney adds: “It’s going to look inside an issue that is too easy for people not to think about. Because of how well these characters are crafted, it’ll be impossible for people not to relate to it on some level.”