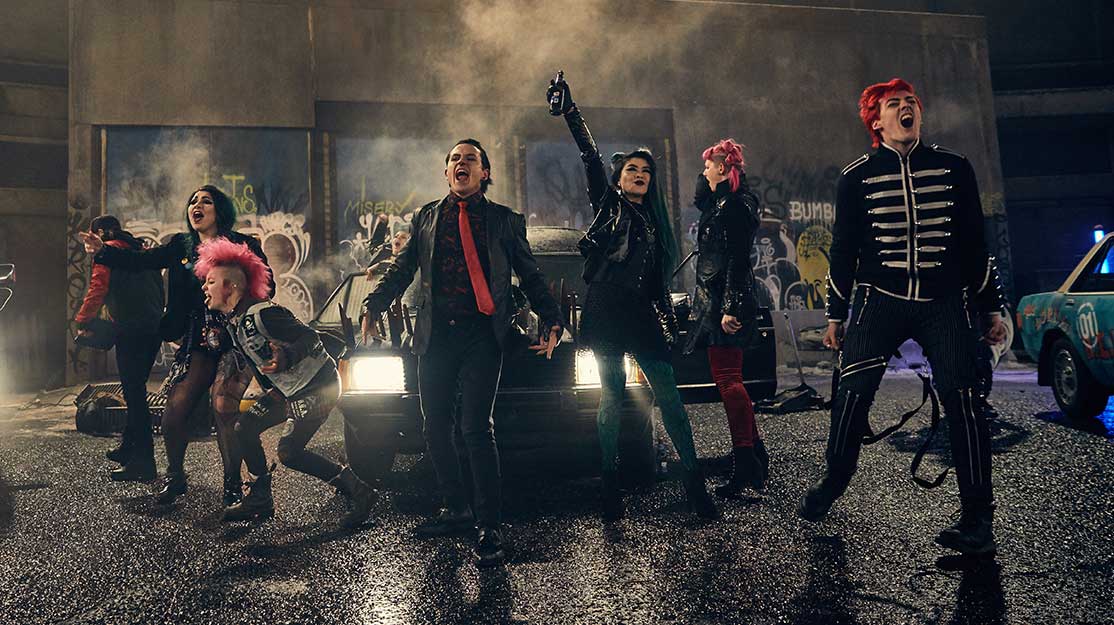 Director Colm McCarthy breaks down one of the most challenging scenes he had to film for madcap street-race drama Curfew. The series is produced by Tiger Aspect Productions in association with Moonage Pictures for Sky1, and distributed by Sky Vision.

In the near future, there’s been an outbreak of a virus, resulting in creatures that roam the night. They’re incredibly dangerous, so from dusk until dawn there’s a curfew across the world. But once a year, the curfew is defied and a mad road race takes place. And this year, it’s happening in the UK.

Curfew tells the story of the different racers, how they ended up in the race and what they’re racing for. It’s told in the style of a madcap genre mashup with much love given to the likes of John Carpenter, harking back to those amazing action movies of the 70s and 80s. It’s a lot of fun, but the special thing it does is take people you might know in everyday contemporary life and drop them into that sort of world.

Curfew came to me because Matthew Read, the writer, and Will Gould, one of the exec producers, had both discussed the project at various stages over the years. It’s been a very long development process. Curfew had a number of iterations before Matthew came on board, and he invested all the energy, tone and specificity it has now. I’d worked with those guys on, among other things, Peaky Blinders, and we knew each other. They were flatteringly very keen for me to get involved and talked to me a lot about it, even before they had a script.

I like to think I don’t have a distinctive personal style of directing. One of the things that’s exciting about directing is creating a unique world for the story you’re telling. Everything should serve the story. Matthew and Will had lots of ideas but mostly what they had was the tone, and the job of a good director is to come in and understand that and interpret it into visuals. I got what they wanted and they trusted me to deliver it. The idea is the audience is dropped into the race with the characters, rather than standing back and watching things.

Probably the most complicated thing we had to deal with is a section of story that straddles episodes one and two and then gets flashed back to in episodes nearer the end. This is when all the cars and drivers gather in a bullring at the very start of the race. We had all the cast there at the same time, shooting dusk until dawn. We had 30-odd stunt performers, 31 vehicles – with action drivers for all of those – and 150 extras, and we had that for a week in Manchester in one location.

Originally in the script, the cars all started in a warehouse. But then we found this huge circular meatpacking plant, like a coliseum, with one exit out that was a concrete tunnel. Myself and Tom Sayer, the production designer, thought that while it was totally different to the script, it would do the job of that opening better because you could have the cars fighting to get out of the hole and smashing into each other. We made our bed and lay in it. It was very difficult and made things extremely complicated because I wanted to shoot using the steadicam for a lot of scenes in that sequence and to move the cameras around a lot in the run-up to the race, which meant we had to have everything there all the time. It’s a lot of moving parts to manage on a set – way bigger than television shows in the UK ever are.

We had the added factor of the ‘Beast from the East’ storm arriving the week before filming. It could have been the most expensive film set in the country at the time and we couldn’t shoot for seven hours because there were blizzards and we had extras helping sweep away the snow. Then we were rushing Sean Bean, Billy Zane and the rest of the cast into the arena to snatch takes when we could.

Then there’s all the health and safety that’s involved in doing these insane stunts in an environment where you’re not going to hurt anyone. We were all very conscious there had recently been tragic circumstances due to stunts on British film sets, and getting it right was really important. There were never more potential failing points than during that week – it had everything going on. It was an intense and quite mad period.