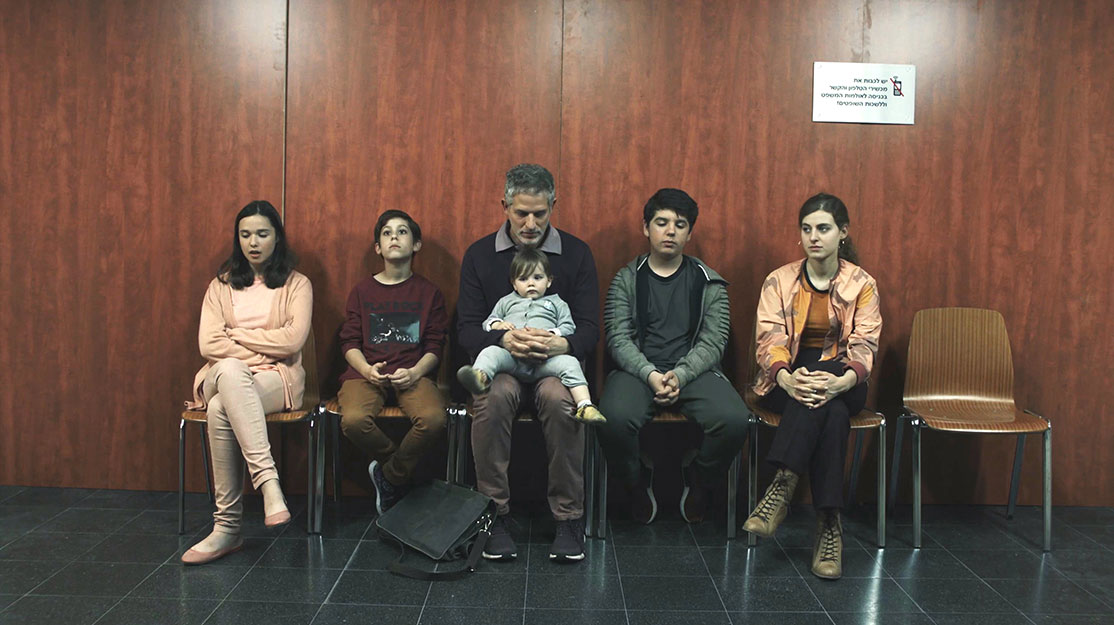 Israeli comic Reshef Levi tells DQ how he looked to his own life for the inspiration for his award-winning series Nehama, about a father-of-five who decides to chase his dreams after being confronted by tragedy.

In his native Israel, Reshef Levi is an award-winning screenwriter, playwright, producer, director, stand-up comedian and presenter. So when it came to his first acting role, he took inspiration from his own life to play the lead in 10-part comedy-drama Nehama.

Levi plays title character Guy Nehama, who has a great life. He has a wonderful wife, five beautiful children, a big house in Tel-Aviv and a well-paid job in a high-tech company. Everything should be perfect, but Nehama retains a long-held yet unfulfilled ambition to become a stand-up comic, blaming his family for preventing him from achieving his dream.

However, when his wife tragically dies in a car crash, Nehama decides the time is right to go for what he has always wanted.

“I’m a stand-up comedian with seven children in real life so there’s a lot of truth in the show that makes it very authentic,” Levi tells DQ. “When it comes to the genre, it’s a comedy, but there’s a lot of sadness and drama inside, so it’s a mix of genres.”

Produced by Yoav Gross Productions and 24 Drafts Studio for Israel’s HOT and distributed by APC, the series was written by Levi alongside director Tomar Shani. Levi began thinking about the premise while writing crime drama Ha Borer (The Arbitrator), and sought to create a follow-up to the long-running series.

“I read an old interview with Steven Spielberg and he said his most successful and best work was when he was writing on his biggest fears,” says Levi, who is also showrunner on Nehama. “So I was sitting in a room thinking, ‘What are my biggest fears?’ I do really love my wife very much so I thought losing her would be a very bad thing for me, especially when you have seven children, and family is a big thing in my life. Then I was thinking to myself, ‘Alright, what is your other big fear?’ and my other fear is not being able to practise my art. If I can’t write and can’t do stand-up comedy then it’s death.

“This show is a love song about a woman. In the centre of the show, there is a man, but it’s all about women and he’s surrounded with women who are strong, smart and funny. You see how much he was dependent on his wife and how much he’s lost without her.”

Guy Nehama, Levi says, represents a lot of people who may feel like a failure if they don’t get to live their dreams. “Many people live their life with regrets and disappointment at the way their life unrolled. Fine people who have great families, healthy children and a great wife they love still don’t feel happy.

“Guy has a lot of bitterness inside him because he blames the world for his own decisions. He says that because of his wife, he didn’t become a stand-up comedian. And then he learns that it wasn’t her, it was him. He was afraid to fail.

“We always wanted to go to the extreme. We knew we were starting from the point of a family drama, but we wanted to have realistic but strong conflicts with his children, with his parents and with his brother. I’m not sure it’s an important journey, but it’s important for Guy and for me as a creator. It was fun doing the show.”

Levi and Shani drew on influences such as Wes Anderson and the Coen brothers to find the right balance of comedy and drama in their writing, wanting to make a series that was more comparable to a movie than a sitcom.

“We put a lot of comedy into it because we had a lot of pain inside, and the way I digest pain in life but also as a writer is I turn it into comedy,” Levi says. “There are very strong, sad, dramatic catastrophes you find yourself laughing at because of the characters and not because they’re trying to make you laugh. You laugh because the situations are so crazy.”

Examples include when Guy’s children tell him they haven’t brushed their teeth for a month and when he forces them to dance with him to help lift their grief.

“It’s all bad stuff but you laugh because you see how ridiculous people are when they’re trying to be happy. They’re trying to force themselves to be happy. The rule was that we didn’t leave any joke in if it wasn’t real and if it wasn’t sincere. We didn’t leave anything in if it didn’t have a sense of truthfulness in it. When we did the show, Tomar was wise enough to tell everybody, ‘You’re not in a comedy. You just act as if its drama.’ That makes it a lot funnier than if we had tried to make it funny. It’s funny because we’re dead serious.”

As Nehama marks Levi’s first acting experience, “we tried to build a vehicle I can drive,” he says. Admitting he isn’t the greatest actor, Levi says he advised writing partner Shani on hat he felt he would be able to do.

“I really enjoyed acting. That was a great experience for me, especially because I was the showrunner of the show so I could also improvise, which is the best part of my job. Writing is improvising on the computer. You improvise the dialogue and then there’s a script. So we continued working on the script when we were shooting the script, and that was fun because we had a lot of comedians take very serious roles and everybody was improvising.”

While Levi describes stand-up as his religion, he says he has found a new love in acting. “Stand-up is a little more intense and needs more practice because you have to do it for years before you’re good at it or decent. Acting is more about being the character and finding the similarities between what’s on the page and you. When I started, I would make jokes about actors that it’s only about memorising lines. [Now I see it as a] magical art form, and the people who do it well are geniuses.”

As a self-confessed workaholic, Levi embraced the constant demands of being a showrunner, from managing a tight budget to overseeing the English-language subtitles.

“It’s an interesting job being a showrunner because you’re not only a writer, you’re the guy who runs the counter between the money and the art,” he explains. “You want the art to be the best it can be, but you don’t want anybody to suffer bankruptcy. So that’s the job – to make the best show possible with a low budget.”

Having debuted to critical acclaim on HOT in Israel, Nehama has also aired on Canal+ in France. In spring 2019, meanwhile, Levi won the best performance award at French television festival Canneseries.

“I know it’s only going to be downhill from now on in my career,” he jokes. “I know that was the peak of my career. I am so grateful for having this experience. It was great. When you get bad reviews, you always says critics are not important. And when you don’t get awards, you say awards are not important. And when the audience doesn’t watch your show, you say audiences are stupid. When you get the three of them together, you say that was good.”

It’s surprising, then, to hear Levi say there won’t be a second season of the series, preferring to move his focus to other projects. One of these, however, is a US adaptation of Nehama, which is being discussed with streamer Topic after it picked up the rights to the original series.

“We are living in an era where it takes a long time between seasons of shows so we wanted to give audiences a fulfilling ending and we did that,” he says. “You could end it and also continue it. But we decided to end it now. A lot of doors were opened after the success of the show and we have other options as writers, directors and showrunners. We are doing a different show in English to be shot next year in the jungles of Colombia and it’s a new adventure. We might return to Nehama later on in life. But you never know. You can only do one show at a time.”

Meanwhile, it’s because of the show’s relatable themes and blend of drama and dark humour that Levi believes it can find an audience worldwide.

“People love to laugh about truthful things and you can identify with the way he has problems with his kids,” he says of his character. “He’s trying to be the best father he can be, but everything falls apart in his hands.”