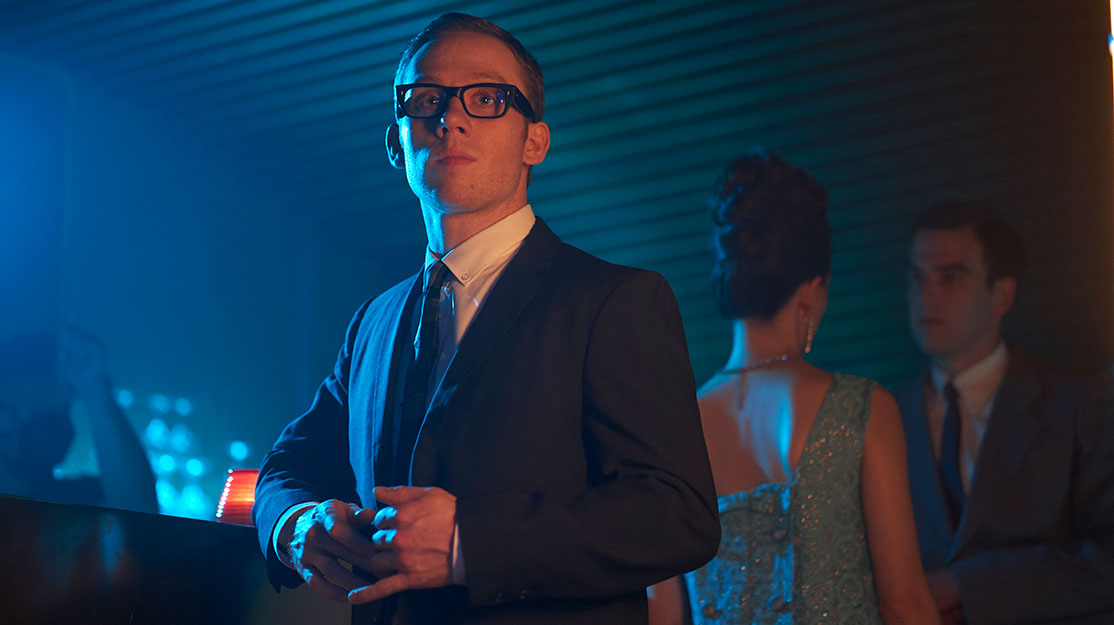 Fresh from his breakout hit Zulu, Michael Caine stepped into the shoes of Len Deighton’s iconic spy Harry Palmer for a 1965 feature film adaptation of the author’s novel The Ipcress File. Almost 60 years later, Peaky Blinders star Joe Cole follows in Caine’s footsteps – and bold, black-framed glasses – in a new television adaptation of the story set between London and Berlin against the backdrop of the Cold War.

Commissioned by UK broadcaster ITV, the six-part series opens in 1963 when Palmer, a British Army corporal on the make, is stationed in the divided German city. A sharp, working-class young man, he is a wholesaler, retailer, fixer and smuggler – until the law catches up with him and he is sentenced to eight years behind bars at a military jail in England.

However, after impressing people in high places, British intelligence offers him the chance to become a spy, using his links to the man suspected of kidnapping a missing British nuclear scientist as the starting point for a dangerous undercover mission.

“We’ve gone back to the book,” Watkins tells DQ about its links to Caine’s film. “There’s some of the flavours of the film, the sixties look and the swagger of the way it’s been shot. You want it to be fun to hang out with the characters and stylish, and then as you get to know the characters, you go deeper and get more emotionally involved. The stakes are real but it’s not like a Kingsman movie where it’s just fun. It’s real but if there is humour, it’s because the characters are witty rather than it being imposed.”

Will Clarke, the chairman and co-CEO of Altitude Film Entertainment, and Watkins had been discussing plans to adapt a Deighton story as a movie. Following The Ipcress File, Caine reprised the role twice more in sequels Funeral in Berlin (1966) and Billion Dollar Brain (1967). He also played Palmer in 90s films Bullet to Beijing and Midnight in Saint Petersburg, which were not based on Deighton stories.

Clarke and Watkins initially looked at adapting Deighton’s 1963 spy novel Horse Under Water but couldn’t quite crack the idea.

“We talked to some really great writers – David Farr, Alex Garland – and kicked it around with them and we just couldn’t quite work it out,” Watkins says. “So we thought, ‘Hang on a minute, are we missing a trick here? Let’s go back to the first book and look at it as a TV series.’ The film’s been done brilliantly but the book has these opportunities to explore it as a longer form and get deeper into the characters.”

The director had previously worked with Hodge on an uncredited rewrite of a movie and contacted the writer about the possibility of bringing The Ipcress File to television.

“He read the book and John and Len have both got a similar sense of humour,” Watkins says. “John really responded to it in terms of the anti-hero. Palmer is the anti-Bond, that’s how he was constructed. The interesting thing about him is he’s a self-made man. You’ve got a world of spies, who are basically posh boys, and Harry Palmer was a working-class guy. He was there on his smarts. He pretends he doesn’t give a shit but he does. John really got the idea of it. Then we spent a while kicking it around, trying to find the line of it in terms of the book.”

Polly Hill, head of drama at ITV, only read a couple of pages and no casting was yet in place when the project was moved forward. Hodge then wrote the scripts and the cast was assembled. “It’s been a long journey, even from deciding it was Ipcress and talking to John, that was six years ago. Things just take a long time,” Watkins adds.

Despite being published 60 years ago, Watkins believes there is huge relevance in The Ipcress File for today’s audiences, from social mobility and class to race and women’s rights. The director says his intention was to hit some of the same thematic notes as hit series Mad Men while keeping the action fast, entertaining and characterful. The story also sees Palmer travel between London and Berlin and on to Beirut, China and a South Pacific atoll.

But despite a likeness between Caine and Cole in the role of Palmer, Watkins tried to avoid too many similarities between the film and the new series, particularly in the way it was shot. The director uses cantered angles and puts objects between the camera and the actors to reflect a world that is slightly off-balance. “In the world of spies, nothing’s quite straight so we wanted to reflect that,” he says.

“We also tried to bring in a lot of texture. We were shooting on digital film, but digital film cleans everything up, so [cinematographer] Tim Maurice-Jones and I were working with James [Price, production designer] to create roughness and texture in the wallpaper, for instance, which adds a bit more grit to the image.”

Adapting the novel, Hodge and Watkins spoke about setting up the story in the first episode. Hodge “did a lot more head scratching in terms of the real work, the wonderful characterisation, dialogue and structuring,” but they both found Deighton’s novel lended itself to an episodic format as Palmer’s mission took him to various locations around the world.

“Those broad guiding ropes were there and then there was an awful lot of work John had to do to figure all that out. He did an amazing job,” Watkins says. “The first episode deals with a lot of plot and throughout the six episodes there’s an awful lot going on, but you don’t want a relentless onslaught. We wanted to let it breathe and find those moments where you can enjoy the interplay between a couple of characters – and not just the top two or three on the call sheet. You have to believe they have a world off-screen.”

Liverpool doubled for London in the series, while half the series was shot in Croatia, where Watkins had previously shot McMafia. Filming started in Zagreb, which stood in for Berlin and Checkpoint Charlie, and then moved down the coast to Split, which was transformed into Beirut. An airbase north of Split became a US base in the South Pacific.

When it comes to filming, Watkins says: “I’m fast and very prepared. I don’t do rehearsals so much as talk through the scenes with the actors. We maybe run the lines a little bit and have a week or so to talk through the part. Particularly in television ,when it’s so much more relentless in terms of time, I’m always on the side of the actors, so I don’t ever want them to feel hurried. If they want another take, I’ll give them another take, but hopefully by the time we’re on set everybody knows [what they’re doing] and it’s more about tiny calibrations. With Tom Hollander, who knows his shit, it’s a conversation about Darby being steely here or sassier there. You’re finding the character together. Often over a long shoot – this was 90 days – your cast know their characters so well, it’s just occasionally reminding them. A lot of it’s in the casting.”

As Palmer, Cole has “an everyman likeability” to him, and has the ability to channel the spy’s disarming wit and sense of humour. “I thought Joe could capture enough of what was in the book and bring something fresh to it,” Watkins says. “You have the sense that here’s this man who’s been slightly traumatised by war and that comes out further in the series. He’s a guy who does not want to pick up a gun. I thought that was quite interesting and Joe got that.”

The Covid-19 pandemic ensured the shoot was “relentless,” filming in masks every day and frequently testing. “But we were bloody lucky,” he admits. There was also the challenge to create a show on a scale that matched his ambitions, “which are always bigger than your budget or your schedule.”

But from the numerous locations, drone shots and stylistic flourishes in front of and behind the camera, The Ipcress File certainly got enough bang for its buck. Having one director across the series also helped the decision-making process.

“You have the freedom to say, ‘We’re going to spend our money here. We’re going to get a crane here, a drone here,’ because you’re much more attuned to the whole picture,” Watkins says. “Generally, when things are shot in blocks [with multiple directors], the creative team are less empowered. It’s a factory sometimes. But actually it’s about planning and being free – the freedom to think big.”

Although the series debuted in the UK last Sunday against the backdrop of renewed international tensions straight out of the Cold War, The Ipcress File injects some sixties style and fun into the schedules while Cole is perfectly cast in the role that made Caine a household name.

“I hope it goes down well with audiences,” Watkins says. “We’re very proud of the show and I hope it connects with the audience. It brings something fresh and there’s a lot of world to explore.”