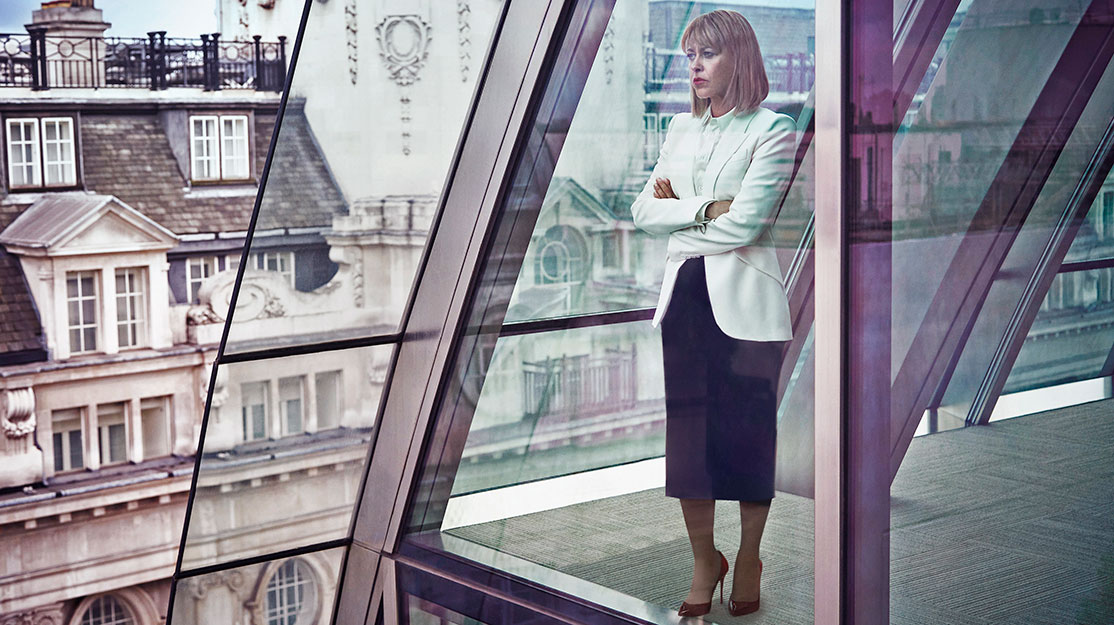 Award-winning writer Abi Morgan explores the highly charged world of divorce lawyers for her latest BBC drama, The Split. DQ visits the set to hear how the female-led series was influenced by US legal dramas – and Sex & the City.

Abi Morgan was chatting to another mum while watching her daughter playing hockey when she was hit by inspiration for her newest television series. The woman, dressed in jeans and a jumper, was frantically responding to calls and texts on her phone while trying to also concentrate on the fiercely contested school match. Intrigued, Morgan asked her what she did. She was a divorce lawyer.

“I loved the contradiction of this woman, who was very dressed down to watch the game, dealing with all these acrimonious exchanges all while she was trying to keep an eye on the match,” recalls Morgan, the Bafta- and Emmy-winning writer of Suffragette, The Iron Lady and The Hour. “We got talking about her job and one of the key things she said to me was that it’s an area of the law that, unusually, is predominantly populated by women. It is regarded as the unsexy end of law but its about so much more than being in a courtroom. And immediately this incredible landscape unfolded.”

A year later, with Sister Pictures producer Jane Featherstone (who the writer worked with on River and The Hour) on board, Morgan is chatting with DQ in what used to be the Holborn office for one of London’s top law firms. This is the wonderfully apt set of The Split, a sexy, glamorous, romantic and entertaining six-part drama set in the world of female divorce lawyers for the rich and famous.

“I had just come from writing Suffragette, which featured this incredible, diverse group of female soldiers,” Morgan says. “I wanted to do another very strong group of women but also women who could look incredibly sexy and powerful and hold their own in what would have traditionally been a male domain.

“And I loved the idea that it meant we could really look at modern marriage. I am always fascinated by the truths we tell each other, particularly when you are just a few women alone at a book club or mums’ night out.”

Morgan doesn’t mind admitting The Split was influenced by hit US legal dramas The Good Wife, Suits and Law & Order. It’s a British show but it’s unusually, and surprisingly, glossy. The series is set in a monied world of billionaire businessmen divorcing their first wives for a younger model and young footballers organising their pre-nups before they marry. Each episode will feature a case of the week, while stories about the lawyers and one particular divorcing couple will arc the series.

The star of the show is Unforgiven, Spooks and River actor Nicola Walker, who is almost unrecognisable in her glossy lawyer uniform. “The interesting thing about this show is that everyone is incredibly well dressed,” continues Morgan. “When we were researching, I was chatting to one lawyer and I asked whether her handbag was from Marks & Spencer – I got that a bit wrong: it was a £25,000 tote from Bottega Veneta.

“There is a bit of a Sex & the City vibe with the clothes. That is not something we normally do on British television but it is totally authentic to this world. They all wear heels, even if they kick them off the moment they sit at their desks. They are groomed and glammed up because they have to be. Their female clients are rich women who should be able to recognise their handbags, while they are also dealing with successful men. They need the men to find them attractive but also to know that they can do their job.”

Walker plays top divorce lawyer Hannah as her life is about to turn upside down. After 20 years of working for family law firm Defoe, she quits when her formidable mother Ruth (Deborah Findlay), who runs the company, refuses her a promotion. So she moves to Noble and Hale, a very different, more corporate company, working alongside former lover Christie, played by Barry Atsma. Their flirty friendship leads to her questioning her long marriage with Nathan, portrayed by Episodes star Stephen Mangan.

Meanwhile, 30 years after leaving the family for the nanny, her father (Anthony Head) returns to their lives wanting his slice of the firm Ruth has spent so long building up. It shakes the world of Hannah and her sisters Nina (Annabel Scholey), who is also a divorce lawyer, and millennial Rose (Fiona Button), who has eschewed the high-pressure world to be a nanny.

“I loved the idea of this intergenerational piece,” says producer Featherstone. “It is definitely about modern marriage but it is also about relationships between mothers, daughters, siblings, husbands, brothers and all of those things. It is not just about sexual relationships but also the responsibilities you have within a family. Ruth, the matriarch, has trained her girls to be as independent, strong and fiery as her, but that creates its own problems.”

Morgan, a child of divorce herself who has never married her long-term partner, actor Jacob Krichefski, says the impact of such a significant life event as divorce is examined in terms of both the lawyers and their clients.

“I’ve had divorces within my own family and seen it happen to friends, and I know how complex and difficult and painful it is,” she says. “This also came out of a desire to look at the legacy we give our children when we bring them up and also the ideas about marriage that we inherit.”

Fittingly for such a female-centric drama, it has an all-female creative team. As well as Featherstone and Morgan, Lucy Richer and Lucy Dyke are coproducers, while Jessica Hobbs (Broadchurch, Apple Tree Yard, The Slap) directs the show, which launches on BBC1 tonight. It is distributed by BBC Studios.

The incredible office that doubles for the glossy and modern Noble and Hale was until recently the London headquarters for Olswang, which happened to represent Featherstone when it came to signing her work agreements. The Split’s research team came to talk to solicitors in the office and, when they heard the company was moving out (after a merger), they asked to lease it, having already spent a year trying and failing to find the right spot for their fictional company. The details of the law firm have been copied down to the smallest item, from the trainers under the desks and different-coloured files (to intimidate the opposition) to Olswang-branded sweets. A bowlful of Nobel and Hale sweets sits in the impressive reception that overlooks Holborn.

London is officially the divorce capital of the world and Morgan and the producers have drawn on rich research with real-life lawyers; there were also two legal advisors to ensure all the events in the show could really happen.

“The whole thing is fascinating and we’ve looked at some real cases of when a private fight goes public,” says Morgan. “You see how emotional everyone gets and think, ‘Oh so that’s why Fiona Shackleton came out of court with her hair soaking wet’ [when Heather Mills doused the lawyer in water during her divorce hearing with former Beatle Paul McCartney].”

Featherstone adds: “And it is astonishing hearing what some of the judges say in front of them. They are incredibly opinionated and basically tell them they are damaging their children, damaging themselves and are stupid people who shouldn’t be wasting their time. That’s not to say we are going to mock people who are going through this. The tone of the piece has a light touch but the emotions are all there.”