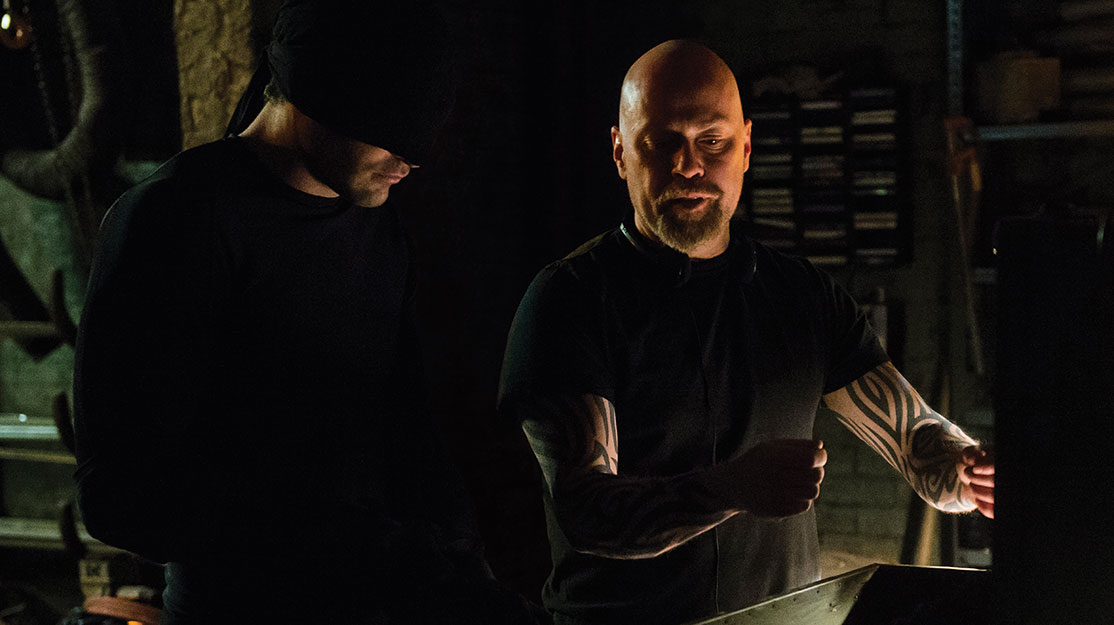 Speak of the devil: Showrunner Steven DeKnight on making Daredevil

Having grown up as a fan of the comic, Daredevil showrunner Steven DeKnight describes his role as a ‘dream come true.’ He tells DQ of his vision for the show and explains how he’s handling the pressure of leading Marvel’s Netflix charge.

It takes just a cursory glance at Steven DeKnight’s CV to know he has an enviable track record.

As well as credits for Buffy the Vampire Slayer, Angel, and Smallville, he was the creative force behind US premium cable network Starz’ swords-and-sandals epic Spartacus.

And now he is overseeing Marvel’s Daredevil, the opening phase of Marvel Comics’ attempts to recreate the critical and commercial success of its cinematic universe on the small screen.

The 13-part series, which launched worldwide on US VoD giant Netflix on April 10, tells the story of Matt Murdock. Blinded as a young boy but empowered by extraordinary senses, he fights against injustice by day as a lawyer and by night as Daredevil in modern-day Hell’s Kitchen, New York City.

DeKnight (pictured top alongside Charlie Cox as the masked titular character) executive produces alongside Drew Goddard and Marvel’s head of television, Jeph Loeb. The show is produced by Marvel Television in association with ABC Studios for Netflix.

It was only by chance, however, that DeKnight got the gig, with Goddard pulling out of showrunning duties to develop Marvel’s Sinister Six for the big screen.

“They reached out to me to see if I would be interested in hopping on board and taking over as showrunner,” DeKnight explains.

“I read the scripts and I thought they were fantastic. I went over to their offices and they walked me through the plan for the season, and I thought that was phenomenal, so I signed on. It was an easy choice for me because I grew up reading Marvel Comics. I’ve been a huge fan since I was a little kid, so it was a dream come true to be working in the Marvel universe.”

DeKnight isn’t just a fan of Marvel, though. He is a fan of Daredevil, which made the decision to join the series even easier. “I’ve read Daredevil since I was a kid,” he says. “I was a huge fan of many of the incredibly talented people who worked on the comic, particularly Frank Miller and Brian Michael Bendis. They really spoke to me, especially Bendis’s work, which had the look and feel of a show that I thought would be great to bring to the screen.”

That show is dark and moody, set in the shadows and barely lit alleyways of a brooding city. “I wanted it to be really grounded and gritty, which is what they were shooting for before I came on board,” says DeKnight.

“One of the things that really excited me about the project is that we can push the adult content. Since I came on, we’ve always called it more PG-15 – it’s not quite an R rating, but we kiss right up to it.

“Netflix has much more adult, edgy kind of material. If Daredevil had an R rating, I don’t think they would care. But of course, with Marvel, we don’t want to alienate younger fans. If you do have kids under 15, I’d suggest you watch a few episodes first yourself before you roll it out because it’s a very different animal in the Marvel universe.”

Daredevil is the first of four Marvel series coming to Netflix as part of a deal, announced in November 2013, which will see them share storylines, characters, cast members and settings akin to the cinematic universe that has struck box office gold time and time again since Iron Man came to the big screen in 2008.

The second Netflix series, A.K.A. Jessica Jones, is already in production and due to air later this year, while series based on the characters of Iron Fist and Luke Cage will follow, before all four superheroes unite in miniseries The Defenders.

Leading off Marvel’s latest television attack, following the launch of ABC’s Marvel’s Agents of S.H.I.E.L.D. and Agent Carter, did DeKnight feel any pressure? “It’s the cornerstone of 60 hours of television. There’s a huge amount of pressure to get it right, but you have to trust your instincts and tell the story you really want to tell and that the audience will enjoy.”

Yet this isn’t the first screen adaptation of Daredevil. Ben Affleck starred as the masked crimefighter in a 2003 film that earned mixed reviews and alienated fans of the original comic. DeKnight says his version is “so different” from the film. “I thought Ben Affleck gave his all, and there were a lot of incredibly talented people in that movie, but anyone who’s ever done TV or a movie knows sometimes it just doesn’t work out.

“The movie was also before Marvel Studios got up and running with Iron Man and controlled its own content, which has made a huge difference in how these characters are portrayed. We came at the show with a different perspective. We approached it first and foremost as a crime drama, with the superhero element laid on top of it. For me, the most exciting scenes weren’t the run-and-jump, they were the more emotional scenes that we get to do with characters. Over 13 hours, you can tell a story about who the hero is, which I found really interesting.”

One thing DeKnight isn’t worrying about, though, is how the four Netflix/Marvel series will entangle themselves in the same universe. “Quite frankly, the onus is on the other series,” he says. “We were the first. Jessica Jones had a writing staff and they were working on it, but Luke Cage and Iron Fist didn’t have showrunners and weren’t getting off the ground. So really, the idea of the whole integrated universe is part and parcel with the other shows, since we were out there by ourselves. The true Marvel fans will see quite a few Easter eggs that set up things that will hopefully happen in the future, so there are some very subtle tie-ins with some of the other shows.”

It was after writing a spec script for sci-fi series Deep Space Nine that DeKnight got his big television break. The UCLA graduate began writing spec feature scripts, and later turned to television. But nobody wanted to read his Deep Space Nine write-up, so he put it in a drawer and, he says, “forgot about it.”

A year later, he was contacted by a friend who was working on a new MTV show called Undressed, headed by The Killing Fields director Roland Joffé. DeKnight recalls: “He said he was working on a show that was very good and that if it got picked up he could get my stuff to Joffé’s people. About six months later, the show gets picked up. It was a kind of teen sex comedy. My friend calls up and tells me to send my stuff. All I had was this Deep Space Nine script – which was not a teen sex comedy. But it was one of those career miracles – they read it and liked it, and that’s how I got my first job.”

From there, he wrote a spec script for Buffy the Vampire Slayer that found its way into the hands of creator Joss Whedon. He was discussing joining Buffy’s animated spin-off that was in development when Whedon offered him the chance to write an episode of the live-action series. DeKnight agreed, and as soon as production had finished on his episode, he was called back to the set, where Whedon offered him a full-time writing job.

“That was really the moment that started my career as it is now – Joss taking me on,” DeKnight says. “I worked on a couple of seasons of Buffy and the last two seasons of Angel, and Joss really trains showrunners. He has you involved in everything: breaking the stories, working the stories. He also has you in casting, on the set, editing, and in all the meetings.

“He wants everyone to learn how to do it all, and he’s also the one who gave me my first shot at directing, on Angel. So he was a huge influence, and I learnt so much from him.”

After Angel completed its five-season run in 2004, DeKnight teamed with Jeph Loeb, now the head of Marvel Television, on Superman prequel Smallville, and later joined Viva Laughlin, a Hugh Jackman-led musical he describes as “one of the hugest disasters of the decade, just a complete clusterfuck.”

The show, a remake of British musical comedy drama Blackpool, was a critical and ratings disaster from the start and was pulled by US network CBS after just two episodes. DeKnight and fellow co-exec producer Tyler Bensinger were halfway through shooting episode seven when they got the news.

“It was seriously one of the most bizarre experiences ever, but I wouldn’t change anything,” he says. “It gave me a chance to spearhead a show for the first time and it was a real trial by fire. I’ll never forget when we aired on a special night right after CSI on a Thursday and lost 10 million viewers. The second episode was that Sunday and we lost millions more viewers, then on the Monday at work we got the call to say we’d been canned. We all saw the writing on the wall.”

It was during a subsequent writers’ strike that DeKnight was reacquainted with Whedon who, while the pair were picketing outside Fox Studios, offered him a place on the writing staff for his latest series Dollhouse.

And it was as he was preparing to direct an episode of the Fox series that DeKnight was asked by his agent whether he was interested in joining Evil Dead director Sam Raimi on a gladiator-style series for US premium cable network Starz.

“In the meeting I found out it was Spartacus, which froze my soul because I’m a big fan of the Kirk Douglas/Stanley Kubrick version. But, bizarrely, it was almost the meeting that didn’t change my life. They said, ‘Great, can you start on Monday?’ And I said, ‘No, I can’t start for another nine weeks – I’m directing an episode of Dollhouse.’”

Starz decided to look elsewhere, but DeKnight was informed by his agent halfway through his directing duties that the network hadn’t found anyone else and wanted to know if he was still interested. Of course, he said yes.

DeKnight describes Spartacus, which ran for three seasons and spawned prequel miniseries Spartacus: Gods of the Arena, as a “39-episode experiment” filmed in the style of blockbuster 300 against a green screen. His deal with Starz also saw him develop military sci-fi series Incursion, which has been put on hold, and adapt Italian crime drama Romanzo Criminale.

As his contract ran out, Goddard left Daredevil, and DeKnight was on hand to take on the show and lead Marvel’s Netflix invasion.

“There’s never been a better time to be in scripted drama,” he says. “There’s so many opportunities and so many people taking chances on things that are different. Shows like Fargo, True Detective, Better Call Saul and Game of Thrones. There are just so many opportunities to do things outside the box.

“The explosion of cable, premium cable and now new media places like Netflix, Amazon and Hulu gives you so much opportunity. The downside is you’re no longer doing 22 episodes a year on a major network, so the financial benefit incentive is lower – but it’s more than a fair trade for the amount of creative room you get nowadays.”