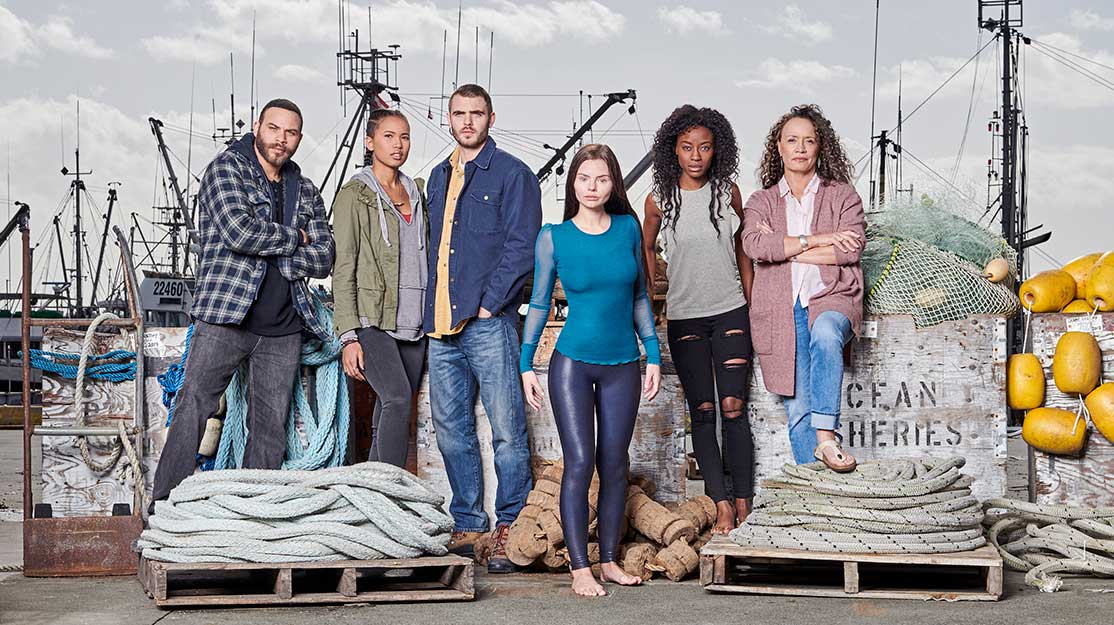 Just when you thought it was safe to go back into the water, mermaids and humans are set for a battle to control the ocean in Siren, which launches on US cable channel Freeform next week. DQ dives into the series with showrunner Emily Whitesell.

Long before the cameras began rolling on Humans, the sci-fi coproduction from Channel 4 and AMC, the group of actors cast to play the androids at the centre of the show spent weeks in rehearsal perfecting every movement and gesture. For Freeform drama Siren, which debuts next Thursday, the starring ensemble went through a similar process – only this time they were playing mermaids, and they were underwater.

Visual effects, the final piece of the jigsaw put into place ahead of Siren’s debut, will help to create a realistic look for this fishy tale. But when it comes to movement, that’s on the actors.

“We’ve done a lot of work in the water because we wanted everything to look as authentic as possible,” says showrunner Emily Whitesell when asked how much of the show was shot on camera. “These actors are unbelievable, they are diving into the freezing water off the coast of Vancouver [where Siren was shot]. Then for anything under the water, we have a giant tank and underwater cameras, and they’re in suits that mark them up in a way so that, afterwards, the visual effects people can add something. But as for the actors, the more they can move as these creatures, the better off we are once we get to visual effects.

“Eline Powell, who plays the mermaid Ryn [at the centre of the story], must be partly mermaid! She’s such a physical actor; she takes on the life of this thing and moves in such a way that it’s so authentic. Our main actors are so into it, they’re really embodying these creatures. We just have to keep them safe [in the water] and try to make their movement as close as possible [to a mermaid] so we can minimise the visual effects.”

Siren is set in Bristol Cove, a coastal town that, according to legend, was once home to mermaids. And when the arrival of a mysterious girl (Powell’s Ryn) proves this folklore to be true, there begins a vicious battle between man and sea as these predatory beings seek to reclaim their right to the ocean.

The drama is based on a story by Eric Wald and Dean White, who executive produce alongside Whitesell, Brad Luff, Nate Hopper and RD Robb. Disney Media Distribution is handling international sales.

Whitesell’s reluctance to lean too heavily on her effects team also extended to a desire to avoid the pattern of shows such as 1970s/80s series The Incredible Hulk, in which viewers would see Bill Bixby’s David Banner transform into Lou Ferrigno’s Hulk each week. “We really tried throughout the first 10 episodes to vary what you’d see in terms of transformation,” she explains of the mermaids’ differing states between land and sea.

“Part of the mythology we’re using – we got to make up a whole mythology of our own – is when mermaids come onto land, they become more adaptive each time, so they can stay longer each time. So for a couple of episodes we can have a different transformation or tell a different story about what it means to be a mermaid. In every episode you see something cool as far as a transformation or visual effect, but we only do the actual transformation in visual form several times throughout the first 10 episodes.”

As a writer and producer, Whitesell’s credits include Homicide: Life on the Street, Roswell, Party of Five, American Dreams and, most recently, MTV teen drama Finding Carter, on which she was also showrunner.

“I got so lucky,” Whitesell recalls of becoming involved in Siren, which was originally titled The Deep. Her agent passed her the script as production was ramping up for the pilot, and despite initially hesitating at the prospect of a mermaid drama, she agreed to read it.

“I’m not a mermaid girl but I read the script and I could not believe the quality of it and the level it was being worked at,” she says. “I’d never seen a story like this on TV. As a producer and a writer, you’re always looking for new things to explore, and it rang all these thematic bells about things I love to write about in terms of the ‘others’ in the world and acceptance of people – very deep themes that I always care about.”

Wald and White wrote the pilot, before White left to continue his directing career and Whitesell stepped in to help Wald polish the script. Scott Stewart then directed the pilot before Freeform, the cable channel formerly known as ABC Family, greenlit a further nine episodes in April 2017. Production began in July.

Despite not being involved in the story’s conception, Whitesell says she feels fully invested in Siren, having joined at such an early stage and having taken charge of casting and the writers room. Her partnership with Wald has also blossomed.

“I know you hear all kinds of crazy stories about people not getting along but Eric, because he’s not done television, is such a collaborative and creative person and he’s been fascinated by the process,” she says. “Some of the compromises you end up making in your initial vision or what you thought of when you were writing and then how it actually plays out, he’s been fascinated by watching that happen. He has such a great film eye so he always starts from a very elevated place, and together we’re able to say, ‘Here’s the compromise.’ He has been absolutely riveted and the relationship has gotten better and better.

“He naturally loves to work on visual effects and that is such a labour-intensive process. I am much more about how we’re telling the story and the arc of the story. I’ve taken the reins in that way and we both have different strengths, so that has been fantastic.”

Asked about her showrunning mentors, Whitesell lists peers such as Marshall Herskovitz, Ed Zwick (both Once & Again) and Party of Five’s Christopher Keyser and Amy Lippman, noting that beginning her career on the lowest rung of the writing ladder meant she could reflect on different ways of doing the top job and how she might one day approach it herself.

“Nowadays, showrunning is such a big job in terms of casting and writing, and you’re responsible for every aspect [of the show]. Where are we shooting, what are we shooting, what does it look like, how are we lighting it, what stories are we telling, how are we casting? When I consider all the jobs that happen every day, I can’t think too much or my head will explode.”

Ensuring her head stays intact comes down to delegation, with Whitesell surrounding herself with talented people and letting them do what they’re good at. “You shouldn’t be threatened by really talented people, they can help you. It’s all good and you should try to elevate everyone. That helps people invest in the show.”

Producing a series for teen-skewing Freeform, Whitesell is aware of the seemingly unstoppable tide carrying her target audience away from traditional television and towards YouTube and other streaming platforms. How they watch Siren, however, doesn’t concern her, as the showrunner’s focus remains locked on the type of show she is making.

“This show on FX or another network would be completely different and yet I think Freeform really wanted to take some risks with it and push some darkness and some interesting things,” Whitesell notes. “They also believe younger viewers are so savvy – not just technically, but they have great taste and they’re used to seeing visual effects and things that look good. It needs to look good.

“I do not concern myself with the idea of trying to make a hit and grab an audience. I leave that to the network to figure out. Creatively, it’s the wrong place to operate. You have to think about what you’re trying to say and the quality of what you’re doing. Beyond that, I have no control so I don’t spend much time thinking about it.”

What Whitesell has been thinking about, together with Wald, is the future direction of Siren, which the showrunner says could run to five seasons and beyond. “We always say television eats story so quickly so some of the stories we thought were going to be five years down the line, we’ve moved up already,” she explains. “But Eric does have a long-term vision for the show, which is why I think the network was so excited about it. He was really able to talk about where it was going to go, so we’ve continued that conversation and we’re so much on the same page at this point that we’re pitching the same stories for future seasons.”

Across the TV drama landscape, it’s sink or swim as hundreds of competing series look to grab enough viewers to keep their heads above the water. As a show about mermaids, creatures rarely given their own platform on the small screen, Siren has a good chance of staying afloat in 2018.