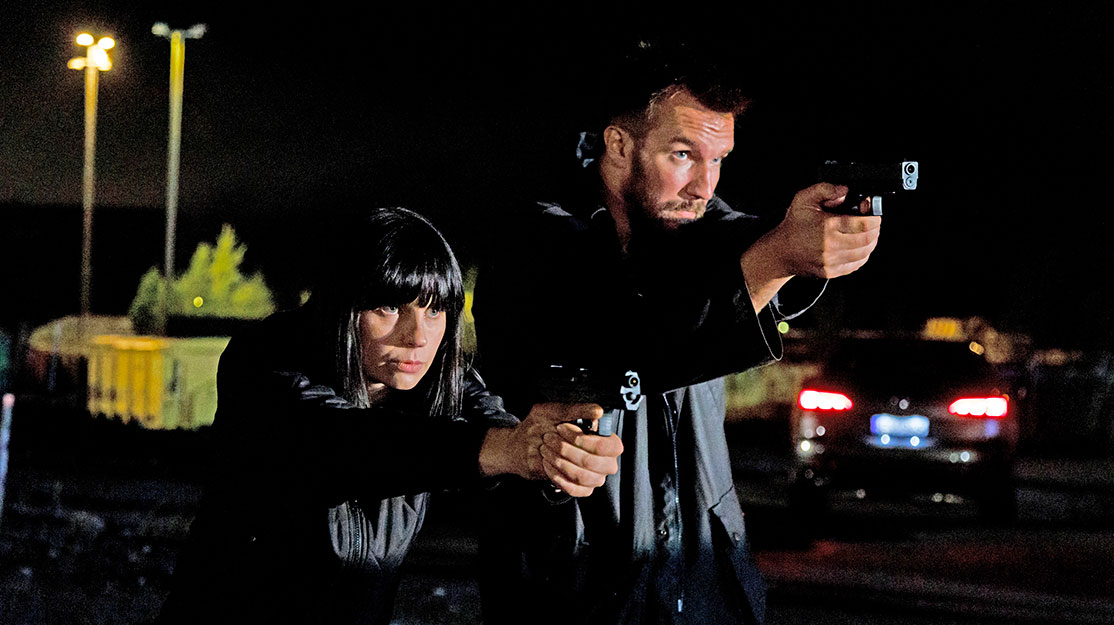 Based on a series of Finnish novels, crime drama Harjunpää (Helsinki Crimes) introduces a different kind of detective. Star Olli Rahkonen and director Matti Kinnunen discuss how the title character’s empathy and family life balance out the dark crimes he investigates.

As viewers around the world remain gripped by Nordic noir, spare a thought for the writers and producers from across Scandinavia trying to come up with a fresh new crime series. One show hoping to stand out from the crowd certainly has the right ingredients: eight-part drama Harjunpää is based on a beloved series of novels featuring a compassionate detective dealing with a spate of dark, deadly and devastating crimes, set against the backdrop of blue-sky, present-day Helsinki.

“The problem in Finland is it’s a time of crime shows,” admits Harjunpää director Matti Kinnunen (Cargo). “One critic said you could almost write an alphabet from all the detective stories we have in Finland right now, so it’s not an easy task to find your own voice with the audience. But I think we have done it pretty well.”

Produced by ITV Studios Finland for local broadcaster MTV3 and Scandi streamer CMore, the series is based on the novels about police detective Timo Harjunpää by Finnish writer Matti Yrjänä Joensuu. There have been 11 Harjunpää books in total, the first being published in 1976.

In this latest adaptation – there have been a number of films and TV series featuring the literary character over the last five decades – screenwriter Harri Virtanen has updated the series by placing Harjunpää and his team in present-day Helsinki, where they must solve a range of difficult cases. The feature-length two-part stories include misogynist hate crimes, youth gangs, hackers and a potential serial killer.

But what sets the series apart from other crime dramas is Harjunpää himself, an honest and conscientious policeman who holds great empathy and respect for all people, no matter how brutal the crimes they have committed.

“This role has been done before, in many different ways, but the thing I was most glad about was that I’m not playing a manly man who is aggressive,” says Olli Rahkonen (Touko Valio Laaksonen), who plays the lead character. “I’m just a normal father-of-two who tries to maintain his faith in humanity, even though it’s sometimes hard to understand the crimes [he’s investigating] and the reasons behind them. It’s not like this toxic male character you are used to seeing. Most of the time, you see lonely, broken human beings who have lost faith in everything, so it’s a pleasure to actually play a really normal guy.”

“Although the crimes are grim and it’s a cruel world, there’s a certain human touch in this series and these characters, especially when it comes to Timo,” notes Kinnunen.

Viewers spend a lot of time with Harjunpää and his family, who provide him with crucial support away from his day job. “It’s all about the family,” says Rahkonen. “From the first time I read the scripts, I realised it’s all about the family. It’s cruel outside but at home they have a good relationship with the kids and his wife and they enjoy spending time together. It’s not like he wants to be on his own, it’s quite the opposite. The family was the key point in building the character.”

Playing a famous detective, the actor was understandably delighted to land the role. “But the next day you start to think, ‘Fuck, now I have to do this.’ It’s easy to dream about things, but then you have to actually build the characters,” he says. “When I met Matti and the other actors, I knew we were all in this together so it made it a lot easier.”

“In many ways, it’s a pretty normal police team but it was funny with Olga because our characters met for the first time in the first episode and we became friends in real life at the same time as our characters became friends in the TV series,” Rahkonen says. “It was actually really good that it happened that way. We didn’t know each other before and we were getting used to each other as human beings and also as actors.”

Kinnunen remembers the exact moment he knew he wanted to work on the series, having just read the scripts for the second story – episodes three and four – and being taken aback by the wave of sympathy he felt for the antagonists.

“The story is about these young gangsters, guys who are only 15 and 17, and they amuse themselves by killing people. It was told in a very specific way,” he says. “I remember my feelings when I read the script. At first it was like, ‘I hate these guys and I hate this world.’ Then when I was told how they are living, where they come from and what they have already seen in this world, even though they are so young, and I felt pity for them and really sympathised with them.

“My emotions towards these guys were [up and down] like a rollercoaster and then I thought, ‘I want to be part of this story.’ Of course, I had seen previous versions of Harjunpää and I knew the stories really well. But our writer had brought in something very modern and created some new material. I love this main character – I love his attitude, the way he thinks, the way he feels, how he reacts and how he tries to solve problems in his life and solve crimes while trying to be himself in this world.”

The show was filmed last year, and the director enjoyed a period of rehearsals to help find its tone – a process Rahkonen describes as a “luxury” for a Finnish series.

“It’s not often you have that rehearsal time. Maybe it’s about money, but when you have time, you should always meet the characters before you start actually shooting,” he says. “It was luxury, especially for me because it’s my first lead role in a TV series. Of course, the pressure is there, but it helped every time I got to meet people in person and talk about the scenes. It becomes a lot bigger in your head when you’re alone, but when you get to talk about it, it relieves the stress quite a lot. I would like to keep it that way in the future, too.”

“The luxury for me,” says Kinnunen, “was we could concentrate on these stories and characters before we started. It was amazing how well all the actors stepped into the shoes of those characters and found a way to go with them. It gave me much more time to really work with those roles, and also concentrate on the supporting roles.”

The director jokes it was rare that he would have to walk the actors through a particular scene, such is his preference for early discussions over on-set instructions.

Rahkonen says: “We had been filming for four or five weeks and I had to go to Matti and say, ‘I just have to be sure [about what you want me to do] because you haven’t told me anything.’ Matti was not about instructions. He’s very calm and peaceful person. Sometimes it’s chaotic on TV sets, so it’s good to have someone calming you down.”

As the show contrasts dark crimes with a warm and sunny Helsinki, Kinnunen was keen to ensure it remained authentic and grounded at all times to ensure the action – and the character’s actions – was believable to viewers.

“I enjoy realistic, character-driven stories where you can identify yourself in the characters,” he explains. “I wanted to create connection between the audience and these characters and make them feel they are with Timo and Onerva when they go to investigate these crimes. Believability is one of the key words I was looking for.”

While there weren’t too many stunts Rahkonen had to prepare for, one thing he wasn’t expecting was to be filming during “one of the hottest summers in Finland I’ve ever witnessed.” Unfortunately, the actor and the costume team had already decided Harjunpää would wear a jacket.

“We were filming on a rooftop and it was so hot that I had an icepack on my neck and on my wrists because it was so warm,” he says. “That’s definitely something I’m going to remember all my life because it’s always those not-so-nice circumstances you remember. But [the series] was so well-written and we talked about the scenes, so there wasn’t anything too challenging. The sunlight was the biggest challenge.”

Rahkonen and Kinnunen are already looking ahead to a potential second season of the crime drama, which is distributed internationally by Oble, and to continuing Harjunpää’s story.

“You should always try to offer something different [from other series]. Sometimes it’s something you can’t predict,” Kinnunen says. “Although we have a lot of brutal, dark, cruel crimes, I always try to challenge myself to find something worth telling from our everyday lives so it doesn’t feel too fictional.”

“There are no superheroes or action heroes in this series,” Rahkonen adds. “The biggest thing we have is that there is always hope and everybody tries to understand these people, not blame them, and maintain their faith in humanity. It’s not 100% dark as these series can easily be.”