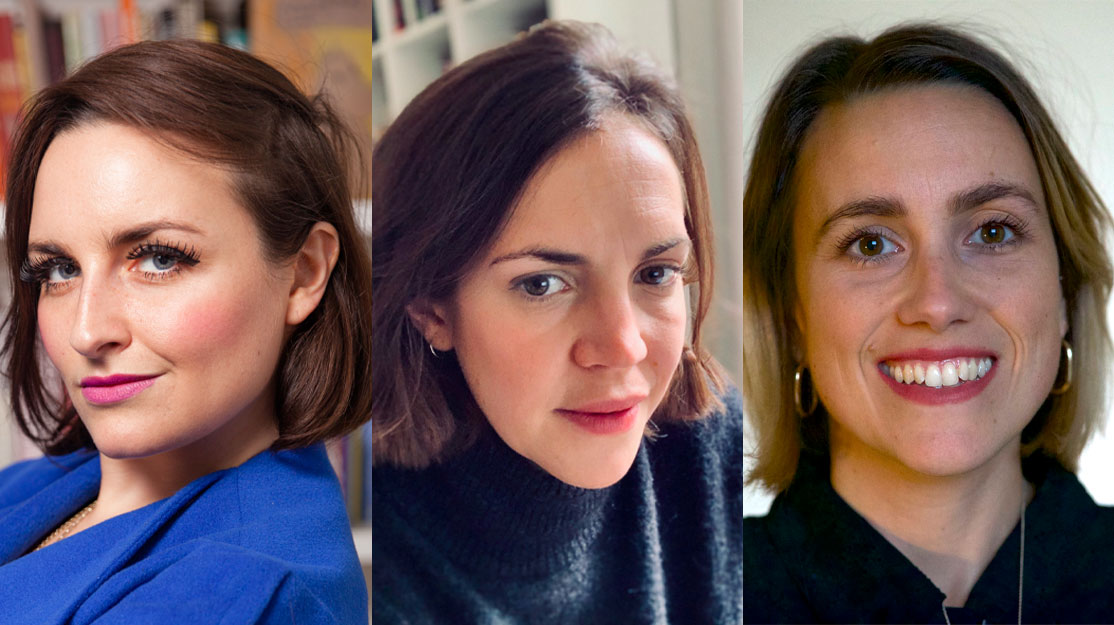 What Have I Done? author Laura Dockrill and Pulse Films’ Moss Barclay and Abigail Dennis (pictured from left above) reveal how they are adapting the memoir, which shines a light on a little-known illness called postpartum psychosis.

Described by pop star Adele, a close friend of the author, as “a book to save a whole generation of women,” Laura Dockrill’s What Have I Done? charts the writer’s battle with mental health issues as she was struck by postpartum psychosis following the birth of her son.

Part memoir, part self-help guide for other new mums and people suffering from mental health issues, the book takes readers on an eye-opening journey into Dockrill’s experience of the illness, which led to severe paranoia, suicidal thoughts and a stay in a psychiatric hospital, and her subsequent recovery.

The author and illustrator is now leading the development of a TV series based on her book, after Gangs of London producer Pulse Films snapped up the rights earlier this year.

“My son will be three in February, so just over two-and-a-half years ago I was coming to the end of an idyllic pregnancy,” Dockrill recalls, speaking about the project during Content London On Demand’s Hot Properties: Books-to-Screen session. “But I went through a really traumatic labour – most labours can be traumatic – and there was a whole casserole of nonsense which then led me to be extremely sleep-deprived and have an emergency caesarean.

“We found out my little boy was starving inside me, so he came out really skinny and small and just wanted to feed constantly for 24 hours. Very quickly, over the course of two weeks, I unravelled to the point of hospitalisation and woke up on Mother’s Day in a psychiatric ward when he was three weeks old.”

What Have I Done? is a raw and honest account of Dockrill’s life during that period as she faced spiralling emotions and the expectations placed on new mothers. Writing the book, she says, saved her life.

“I never experienced mental health issues before and this [book] is for new mums, but it really is a human story,” she explains. “It’s a love story. It’s a love letter to [husband] Hugo, to Jet, my little boy, and to myself because it wasn’t my fault. When you are hit with a mental illness, you think you’re someone who can’t get mentally ill. Actually, none of us is immune. It really just wasn’t my day. It was just bad luck. It can happen to anybody.

“At first, I didn’t want it to come near the work I usually do in case it was ‘infected’ or it ruined my identity. But actually it has saved my life – telling the story and opening this conversation, meeting others, smashing the stigma. All of that has helped me, and it’s funny as well. When I look back, laughter has been a medicine. I got the chance to meet Michelle Obama. I was in the toilet and rang my friend and said, ‘I can’t talk, I’ve just met Michelle Obama.’ And she said, ‘Oh, she’s gone again. She’s in a psychiatric ward again.’ That has been such amazing medicine for me moving forward.”

Dockrill previously partnered with Pulse on short film Goldfish, which was nominated for a Bafta earlier this year. Then when What Have I Done? was published, the company immediately sought to reunite with the writer on an adaptation.

“What really struck us was the opportunity to overturn prevailing narratives around motherhood and around mental health, and to take on a thorny, political and what could be considered a taboo subject, though it shouldn’t be,” says executive producer Moss Barclay. “So often, the stories told about labour or about motherhood are reduced to a very minor story detail. This was going to do the opposite and was about looking at very difficult subject matter, but doing so in a way that is immediately accessible and unobserved in such a sort of beautiful and quite funny way.”

“It’s a story that’s told in technicolour as well as really digging into the grey areas we don’t tend to see in portraits of mental health on screen,” says Pulse head of development Abigail Dennis. “For us as producers and storytellers, the thing that excites us the most, as well as the humour, is the chance to really dig into different genres. It’s not going to be a project that fits into one specific box.”

Dockrill first shared her experiences in a blog post written when her son was six months old. The post went viral, providing evidence that her story resonated with others.

“Doing this, I want to bring it to the mainstream. We see so often this tabloid, sensationalised version of what somebody who is suffering with a mental illness looks like, but particularly postnatal depression where you’re [looked at like] a baby killer,” she says. “You’re in a washed-out pink dressing gown with the door closed. It isn’t like that. You might think that someone with mental illness is scary, but actually they’re the scared one.”

With Pulse’s most recent project being the thrilling Sky series Gangs of London – made with director Gareth Evans (The Raid) and set to return for a second season – What Have I Done? looks like a fairly significant change of pace for the firm. However, Barclay explains that the company seeks projects defined by the talent involved, from Evans to Hollywood star Olivia Wilde (House, Tron: Legacy), with whom Pulse is working on gymnast biopic Perfect, and now Dockrill.

“It’s never the subject matter that determines whether it sits on our slate, but rather the people behind it,” she says. “What defines this as a Pulse project is its bravery and boldness. But it’s really Laura, and it’s the way she’s approaching the subject, which is complicated and thorny, but doing something in a completely new way. We take risks and this is risky, but with risk comes great reward.”

The series won’t see an actor cast as ‘Laura.’ Instead, Dockrill has attributed the name Zoe – the name of her first Barbie doll – to her lead character to help separate the project from her real life.

“That is definitely allowing me to be a bit of a puppet master and freeing me up from the text,” she says. “I feel like there’s so much more to expand on here [from the book] and there are other women’s stories that need to be told. I have a supportive family and not everyone has that, so I’m looking forward to sharing some other people’s stories for the screen.”

Dockrill is currently outlining the pilot and exploring what the TV version of her story may look like, with the option of partnering with a more experienced ‘godparent’ writer further down the line. The series is envisioned as a 30-minute drama – the same format as two of the biggest hits of 2020, Normal People and I May Destroy You.

“That sweet spot of the 30-minute drama is paving the way for us to keep the tautness of the story motor and the through-line of that POV while we explore different genre tropes along the way,” Dennis says. “It’s a road to recovery and we want to explore all the permutations of that.”

The next step for the project is to find a broadcaster willing to support its “ugly, raw and very vulnerable” subject matter, Barclay notes. “But this is also an opportunity to do something very brave, bold and new, in terms of both the way it tells its story and the subject matter of the story itself. What we’re looking for is someone who understands that and who wants to come inside our tent and be part of that process, and who has the audacity that we do and the confidence in Laura as a screenwriting talent to tell that story.”

Though the series, and Dockrill’s story, might at first appear to focus on motherhood or mental health, Dennis and Barclay both agree What Have I Done? will speak to a wide range of viewers.

“Any singular label is actually insufficient here because it’s about a psychological recovery,” Barclay adds. “It’s about putting yourself back together again after trauma, and trauma comes in so many guises and so many people relate to that, whether it’s grief or it’s something far more specific or subjective. What Laura does so remarkably is make something so specific somehow true to anybody, whether they have kids or not.

“There’s a silence on screen about motherhood and about labour, where we believe your waters break, your baby is put on your chest and you’re feeding within moments. It’s a rosy version of events and, actually, I don’t think anyone who’s either witnessed or been very close to birth will suggest labour is like that. This is a subject matter that hasn’t been tackled front-on on screen and it hasn’t been done in the way we intend on doing it.”

Dockrill, meanwhile, believes her illness is the best thing that has ever happened to her. “Even going into lockdown again [in the UK amid the pandemic] is nothing compared to being locked down in your mind,” she says. “You appreciate everything around you so much [more now]. It’s a passport for life. I don’t mind making a fool out of myself. I don’t mind trying things because the worst thing that could have possibly happened very nearly did and I survived it.

“Universally, I feel so much more plugged in to the world. I’m a more empathetic, kinder person – and I really want to translate that idea of empathy, kindness and the understanding that anybody can be going through anything. For new parents going through mental health problems, now more than ever, this is a time to hold people close and ask for help if you need it.”