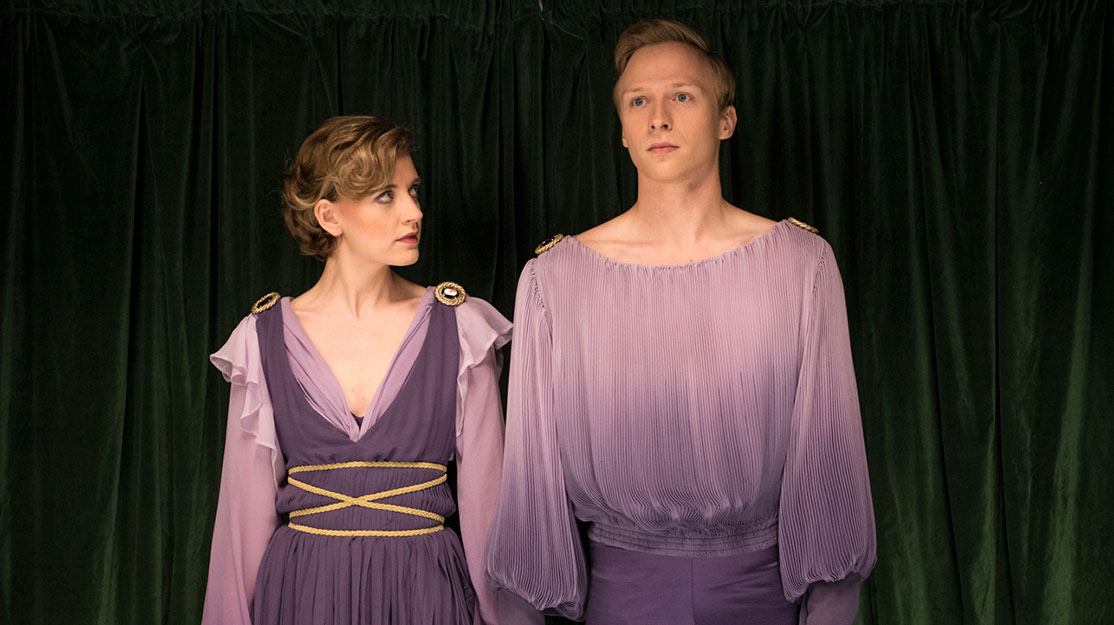 Such is the fame and unrivalled legacy of British ice skaters Jayne Torvill and Christopher Dean that few who watch a new ITV film based on their rise to fame will not know the result of the 1984 Winter Olympics that saw them perform their iconic Bolero routine in Sarajevo.

Yet it’s a sign of the emotional tension in Torvill & Dean that you’re still willing them to grab first place as if you were watching the real thing for the first time.

Torvill & Dean stars Poppy Lee Friar (Ackley Bridge) and Will Tudor (Game of Thrones) in the respective lead roles as writer William Ivory (Made in Dagenham) charts the pair’s early years, from the first time they ventured onto the ice to those final moments that saw them clinch Olympic gold.

The biopic, which is described as a fictionalised account of true events, opens in Nottingham in 1968 with Jayne and Chris as children in their family homes. Jayne is introduced to skating on a school trip, while Chris, following his parents’ separation, is given a pair of skates by his new stepmother.

Both begin to train with different partners, before they are brought together and are soon taking part in competitions. But with both having full-time jobs and commitments beyond the rink, they face an uphill battle to achieve their dreams.

Ivory has form as a screenwriter of one-off biopics, penning 2012’s rowing-focused Bert & Dickie to tie in with that year’s London Olympics. He also wrote Burton & Taylor, about the relationship between Richard Burton and Elizabeth Taylor, the following year.

“I’m a bit down on so many shows that are either procedurals or there are dead bodies lying around. It gets harder and harder to write dramas that aren’t like that, truthfully,” he says of the appeal of Torvill & Dean. “So to be able to write something that is an exploration of two people and how they came to be the successes they were is wonderful.”

The writer says he approaches all fact-based dramas in the same way – by finding a personal connection to the material. When he was first approached to write Torvill & Dean four years ago, he turned the project down because he didn’t think he could add any value to their story. Then he met exec producer Dalton, and the figure skaters themselves, and became interested in their creative process and how they work together as artists.

Torvill and Dean read various drafts of the script and gave notes, but all the time understood Ivory was keen to get under their skin and explore certain themes and moments in their lives that they may not have considered significant. Some lines were cut, other bits were kept in, while some scenes were transplanted from one location or time to another to meet the practicalities of the script.

As a result, “I believe this film is part of their iconography now,” Ivory says. “It might sound ridiculously overblown but I think they’ve been doing something really interesting right through their careers and they are still exploring something, they are trying to push themselves creatively all the time and I admire that.

“There’s one bit in the film that’s a denouement and is a speech I’d entirely made up, but Chris read it and said, ‘That’s me.’ That’s really gratifying. It’s hard because you don’t want to mess up somebody’s life.”

In the film, the contrasting personalities of Torvill and Dean become clear, with the latter more abrasive and abrupt while Torvill appears gentler and more accommodating.

“Sometimes I think with Chris it’s almost like he can’t articulate what he’s feeling, yet he’s feeling it with such great passion and force and sometimes that can be quite frustrating for him. And Jayne has just got this incredible ability to take that raw, unfettered emotion and kind of convert it into movement and dance on the ice,” Ivory explains. “At times, she had to be the more accommodating to achieve what they wanted, otherwise they could have combusted. I think they were just incredible.”

With biopics often focusing on one particular event, it’s interesting that Ivory chose to write a broad take on Torvill and Dean, from their childhood to the Bolero in 1984. When he wrote Bert & Dickie, he recalls, he cut the first 90 pages of the script, as it was all backstory, to give the show a singular focus on Dickie Burnell and Bert Bushnell’s bid for gold at the 1948 Olympics.

In this case, Ivory was keen to show where Torvill and Dean had come from and, in particular, the fact that they didn’t receive any help on their journey to becoming world-class skaters. Dean, in particular, had an unsettled childhood, which features in the film, and the writer believes this informed his demand for precision and the stories in their dances, which were often about love or unrequited love.

And though Ivory was given a lot of creative freedom – he relocated one skating competition from Bristol to Sheffield – there is only one character he made up, Mark Benton’s ice rink worker Ted. “Bizarrely, that was the one I had the most problems with because we had to make sure there was nobody around at the time who could be mistaken for that character, because I made it all up about him and his role,” he says. “He’s this anchor to the world they came from and to which they never quite left. He also represents the pride Nottingham has for Jayne and Chris – we take great joy and reflected glory in their success.”

Unsurprisingly, the challenges of making Torvill & Dean centred on scenes filmed on the ice, which Ivory describes as a “very hostile environment” for a film crew. Not only was it tough to light correctly, but recreating the skaters’ extremely difficult routines also proved tricky.

That was where Nick Buckland and Penny Coomes, five-time British ice skating champions and three-time Olympians, came in, acting as consultants, skating doubles and mentors on the drama. The couple also trained in Nottingham, with Dean among their coaching team, and cited Torvill and Dean as their main inspirations.

Filming took place in Belfast, where they felt “huge” responsibility to ensure the skating was accurate and authentic.

“Our world is a funny one because you just get to see the end product – you get to see the sparkles, the make-up, the music, the lights. And you don’t really get to see what it takes to get to that point,” Coomes explains. “I for one have been through more than my fair share of injuries, and you see that [in the film] too. It’s nice to give our sport this exposure to show that, yes, it’s an amazing thing to be an athlete, but it’s hard too. I think it’s honest and real; that’s what I love about it.”

Leading actors Friar and Tudor didn’t get too much time to train before the shoot, but Buckland and Coomes say they both fell in love with skating. “They wanted to do as much as they could possibly do within the movie, so it was great to work with people who were enthusiastic and wanted to get it right and take the time,” Coomes says. “It’s hard because they had such a tall order to skate and be Jayne and Chris. It was something that was quite daunting for us but they definitely did well.”

Buckland reveals they started a WhatsApp group where they would share pictures of movements and poses they wanted the actors to learn, communicating with them around the clock.

Then on the ice, Friar and Tudor would skate together, and for any complex moves, Buckland and Coomes would step onto the rink. Sometimes Tudor would dance with Coomes, and Friar with Buckland, depending on the shot required by the director.

“They were very clever in the way they filmed it,” Buckland says. “We got a variety of all sorts of different routines Torvill and Dean did the whole way through. But it’s about the story, really, and the story is about them and their relationship on and off the ice. The skating is just one part of their journey.”

“The challenge was mainly having enough time to give each scene everything and making sure we went through everything properly,” Coomes adds. “It did add a different dynamic to what the film crew and the director were used to. It took some time to get things going, and certain scenes took longer than others. Like anything, you always wish you had a little more time.”

With Torvill & Dean airing as the centrepiece of ITV’s Christmas Day schedule, Ivory hopes viewers will be left with a greater appreciation of the sacrifices the duo made to reach the top.

“I think they made sacrifices for their art, rather than their sport. For me, that’s an even more noble thing to do,” he says. “We see where they come from and we see their circumstances. They had no money, no help. They came from really simple backgrounds, and to achieve what they did, I think it’s really worth celebrating. We’re not great at celebrating our heroes in this country, and we should do with them.”