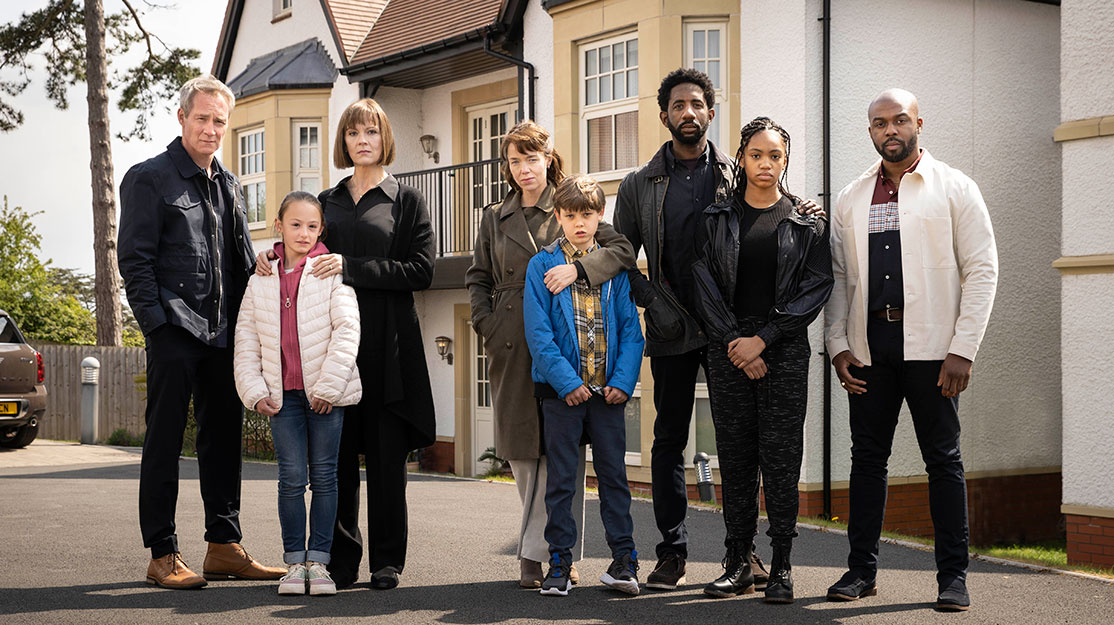 In four-part ITV drama Hollington Drive, Anna Maxwell-Martin (Motherland) and Rachael Stirling (Wild Bill) play a pair of sisters at the centre of a mystery surrounding a missing child.

Living close to each other in an idyllic cul-de-sac, Theresa (Maxwell-Martin) and her older sibling Helen (Stirling) appear close and their families enjoy spending time together. During an evening barbecue, Theresa’s 10-year-old son Ben (Fraser Holmes) asks to play in the nearby park with his cousin Eva (Amelie Bea Smith). When they fail to return on time, Theresa goes looking for them.

Finding the two children seemingly fighting on the edge of a woodland area, Theresa’s instincts tell her something terrible has happened. Her worst fears are then realised later on when neighbour Jean (Jodie McNee) reveals her own 10-year-old son, Alex, has gone missing.

Here, Maxwell-Martin and the show’s creative team discuss some of the themes behind the series that make it more than just a mystery about a missing child.

Following their partnership on Channel 5’s Blood, Petzal and Fisher wanted to do another domestic thriller but this time make it bigger, more ambitious and more heightened.
Petzal: No matter whether I’m working on something incredibly big and high-genre or something that’s a little bit more contained, the stories and the ideas that always jump out at me seem to concern families and family dynamics – and I’ve been thinking a lot about sisters. I’m a sister. I have a sister. That’s probably the most important relationship in my life, and it’s not one I see really depicted on television all that much.
Me and Jonathan go on these epic, miles-long rambles where we brainstorm and come up with ideas, and I started musing on this idea about two sisters who are incredibly co-dependent, who start to suspect their children might be guilty of something, and what they might do to keep that secret between themselves and from their families. That was really where Hollington Drive grew from.

Believing the best dramas are those that feel authentic, Petzal is drawn to shows in which characters behave in truthful ways she may not anticipate, expect or sympathise with.
Petzal: That’s what I like to watch and that’s what I try to write. That always feels important to me. There’s something fantastic about watching a drama and being completely swept up in it and compelled and gripped, but also being made to think about my own family or there’s a ring of familiarity to it. We loved trying to accomplish that with Blood and I always want to do the same with anything I write. My own sibling relationship does not have a great deal in common with ours in Hollington Drive, but you do want to put in as much that feels real and feels fist-bitingly uncomfortable as possible, just to add to that specificity.

After filming The Drowning for Channel 5, Giammetta was approached by Fisher and Petzal for Hollington Drive, finding the script for  to be a real page-turner.
Giammetta: Straight away, it didn’t feel like the usual UK domestic thriller. It had so much texture in the script and loads of layers. There was style, there was a different tone and there were bits of dark humour in there. Then as soon as we started chatting, I felt we were on the same page. It is slightly heightened, but all the characters are written so truthfully and with heart. They’re all kind of perfect on the outside and damaged on the inside, like a lot of us. You could really delve quite deep into these relationships.

The director leaned on influences such as Big Little Lies and Prisoners, while The Truman Show inspired the show’s picture-perfect locations. Visualising the drama’s distinctive tone proved to be a challenge, however.
Giammetta: It was quite hard because when you’ve got humour in a script like this, you’ve got to be really careful that it’s not too funny but also not too dark. It’s got to be realistic. When we put characters in an extreme situation, human beings do things that aren’t quite what we expected them to do, so that was really important for me. There are lots of emotional things that happen in the story as well. I wouldn’t say it’s a dark comedy in any way, but there is there is humour there, so the tone is quite specific.

Maxwell-Martin says she is “not easily impressed” by a lot of television but enjoyed Blood’s style and sense of heightened reality. She then spoke to Fisher and Petzal about working on their next project.
Maxwell-Martin: Luckily this came along. I didn’t actually read it, I just said, ‘Yes. If it’s like that [Blood], I’m sure it will be fine.’
It’s a real page-turner, it really is. And I’m sure with the team we’ve got with Carolina, Catrin [Lewis Defis, producer], all our HODs and Johnny, that we’ve achieved that in reality. It’s not really about a child going missing. It’s about how it cleaves open all these people and the horrors within them, what they’re dealing with and how things can look OK on the outside but be really toxic underneath. I found that really funny and really real. It’s just a lovely project to be part of.

The search for the ‘real’ Hollington Drive took six months of extensive location scouting of cul-de-sacs at the height of the  pandemic last year.
Fisher: We reviewed, I would say, over 100 possible cul-de-sacs, honestly. It was one of those where we just knew that when we saw it, we’d know it was the one, and that was certainly the case. You can tell just from the first 10 minutes that it’s such a fundamental part of the series and almost a character in itself. It was integral we got it right, and I think we did. We’re really happy with it.
Another challenge was we wanted the variety in terms of the people living on the cul-de-sac to be depicted on screen. It really wasn’t a straightforward case of just finding one very middle-class cul-de-sac; we wanted it to have different layers to it. It’s inherent in Sophie’s writing that when you look at this cul-de-sac and this fabulous, idyllic barbecue they’re having in the first five minutes, what you see is very much not what you get. As soon as you begin to pull back those layers, Sophie’s crafted these wonderfully three-dimensional, complex characters, and all is not what it first seems to be.

Working with Maxwell-Martin and Stirling in the lead roles, every day was “fantastic” on set, says Giammetta, who describes the show as a “brilliant directing experience.”
Giammetta: We would come up with things together and it just felt like a really brilliant investigation into how these women work, what they’ve been through and the cost of what they’re going through in the story. I absolutely loved it. And I love them both as people as well, which is always lovely. Anna would make me laugh on a daily basis – she’d have me in tears.

That’s not to say there weren’t some tough moments when the script took the cast to darker parts of the story.
Giammetta: Some of the places Theresa goes are quite dark and it’s quite deep. Anna did it brilliantly, but she needs to take herself to that place and we were mindful of that. I was mindful of the number of takes we did. I wanted her to feel it was real all the time, that she wasn’t forcing anything, which she never did. You have to create an atmosphere on set to allow that to happen. Everyone has to be mindful of that, including the crew. On those days, there was a very focused atmosphere. That’s how it needed to be.

But Maxwell-Martin is keen to emphasise that there is more to the story than the investigation into a missing child.
Maxwell-Martin: Sophie’s writing, and then what Carolina brings to it in terms of her directing, is much more nuanced than that. It’s really exciting to be part of a project like that and not just a cookie-cutter, ‘Oh, God, another child goes missing’ drama, which this is not. This is about people in relationships and oddness.
Carolina, Johnny and Sophie cast it so brilliantly, I didn’t have to do much at all. Jodie was absolutely phenomenal at carrying a lot of the emotional weight. Then they cast our kids so brilliantly as well. Thankfully, they were a right laugh! These shows, they work because everything comes together. It’s not about one singular thing. It comes down to the ensemble of everything. We were really lucky to have such brilliantly weird, intricate actors who brought a lot of openness and humour. That’s what I really enjoyed about it.

Fisher: We never wanted it to feel like a police procedural series. We wanted the two sisters to be right at the heart of, effectively, the investigation, which is not a conventional police-led mystery at all. So, Jim [Howick] as the detective, his investigation is very much happening, mostly off screen in the periphery, and occasionally it comes to the fore. But really, it’s Anna and Rachael’s characters that are driving the story forward in that regard.

Long before filming took place, Petzal and Fisher discussed how they could find a satisfying conclusion to the story.
Petzal: It’s not necessarily about the minutia of what the final scene is, but how it’s going to end and how we’re going to get there. There is an ending and, whether people are satisfied and like it or not, you can never really guess. My hope is always that the entire thing doesn’t ride or die upon you being deeply gratified by having not guessed some big twist. The priority has to be an emotional catharsis, because otherwise the whole thing hinges on your clever plot.
We all live on the internet these days; we all are able to theorise and come to conclusions a lot more quickly and accessibly than we used to. You’re never going to pass that test 100%. I hope people are thrilled and thoughts are provoked. But as long as there’s that cathartic, satisfying character resolution, I’m happy.