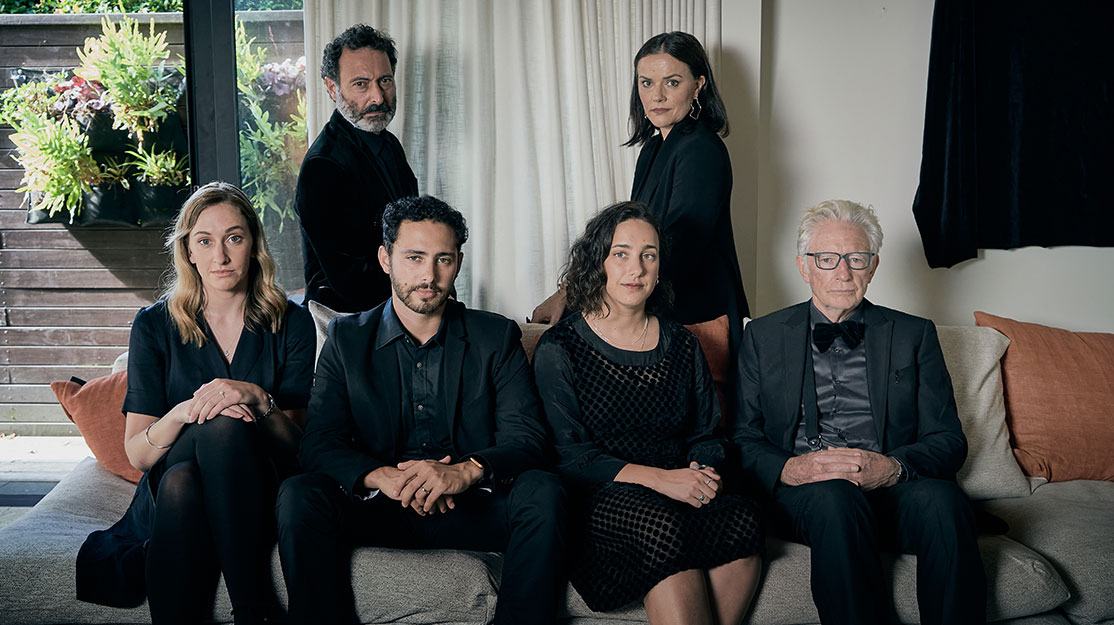 When Simone Nathan’s family and friends sat down to watch her first original series, New Zealand comedy Kid Sister, they might have felt a sense of déjà vu. Not only were several of the comedy’s characters based on people the writer knows, but many of the lines in the show were direct quotes they had said over the years.

“Since I was 16, I have collected endless documents – I call them quotebooks – and every funny thing that anybody says, I write it down and then print and bind it at the end of the year. I still do that,” Nathan tells DQ. “I use that a lot for dialogue, so much of the dialogue itself, things the characters say, is just stuff my mum and dad say to me that is hilarious. But then, of course, you need to actually find the drama and the story and the drive of the series.”

Nathan didn’t look far from home for plot inspiration either, basing it largely on her own life growing up in a Jewish family in New Zealand. Making her professional acting debut, she also stars as Lulu, a young woman in her prime but careening towards ‘spinster’ status in the Jewish world. As her parents attempt to push her into the arms of a ‘nice Jewish boy,’ she discovers she is pregnant with her non-Jewish on-off boyfriend Ollie’s child. Now she has to figure out how to get what she wants while also making everyone else happy.

Produced by Greenstone TV and distributed by Red Arrow Studios International, the five-part half-hour series debuted earlier this year on TVNZ. Nathan admits she had been “really nervous” about the reaction to the show, particularly from the country’s Jewish community, but jokes that she is now “super famous.”

“It really resonated with them in a way it couldn’t really resonate with anyone else because they understand all those things about being Jewish and from New Zealand,” she says. “It’s been a crazy experience to watch me in my own show.”

The fact that she first started working on Kid Sister in 2016 makes the recognition she has received particularly satisfying. In the last six years, Nathan has also established herself as a writer in the US on shows such as Bloodline, Inside Amy Schumer and pirate comedy Our Flag Means Death, which stars her compatriot Taika Waititi (Reservation Dogs). But Kid Sister has always been evolving in the background.

“When I wrote it, it was before I was ever staffed on any other shows, so I was just focusing on my portfolio. I didn’t think any of my portfolio pieces would ever get made,” she says. “I just wanted to showcase my voice and have different pieces that said something different about what I was interested in, who I was and what I like to write. This was the most personal thing I’ve ever written.”

The project emerged from a meeting Nathan had with producer Harriet Crampton and Greenstone, but Kid Sister wasn’t the script they initially planned to discuss. When she did get the chance to pitch the story, which was originally set in the US and featured characters further removed from Nathan’s own life, Crampton advised her to make it more personal.

That led to the decision to relocate it to New Zealand. TVNZ also responded to the pilot script and, after a couple of attempts, it won local funding.

“I’d only written the pilot but I had a pretty detailed pitch document. Since then, I’ve worked really collaboratively with our producer, Emily Anderton, and she and I were on calls for a year just fleshing out the show,” Nathan says. “I’m used to working in a room full of 10 people. She helped me write the five episodes and rewrite the pilot a little bit, but not that much. The pilot was pretty polished because I used it to try to get staffed [on other shows] and I’d rewritten it a million times already.”

Drawing on experiences from Nathan’s life, Kid Sister revolves around Lulu’s search for Mr Right – and how her opinion of who that is differs from those of her family and friends. Discovering she’s pregnant by her non-Jewish boyfriend then introduces a central dilemma to proceedings, leading to small lies that grow into bigger ones as Lulu tries to talk her way out of trouble.

“That’s the driving plot of the show. You have to dig a little bit into who you are when you’re a young writer and tell your own story,” Nathan says. “Then you mix it up and you add stuff to add drama and spice. People say, ‘Write what you know.’ I’m not 100% sold on that because I like to work on this pirate show [Our Flag Means Death] where I’ve never lived anything like that, but I like to study the human condition and write stories about love, family and chosen family, people who lie a lot and flawed characters.

“All of that stuff worked well for this, but I don’t particularly fancy writing something this autobiographical again. There’s a lot of soul-searching when you’re in the writing process, and afterwards you have to deal with so many people asking you, ‘Which bits are and aren’t true?’ Sometimes you don’t really want to say.”

Viewers of the show have also asked Nathan if she’s still on speaking terms with her parents after she “ragged them to filth.”

“Firstly, everyone loves the parent characters and my parents find them funnier than anyone else because they love having the piss taken out of them,” she adds. “They also like to see another actor interpret this version of them and see what’s different and what’s the same. What I’m trying to say is I feel a bit more defensive about this one than I would about a normal show, because if people insult the characters, they’re kind of insulting members of my family or my boyfriend. It’s probably not that healthy.”

Those boundaries have been blurred further by the fact Nathan stars in the series, while her real-life boyfriend Paul Williams plays Ollie and her brother Joseph Nathan plays Lulu’s brother Leo.

The writer says it was “mad” to star in the series herself. Before shooting, she worked with an acting coach, while director Aidee Walker “was really hands-on in a way that was like I was being hugged through the whole process” once filming was underway. “Going from not being a screen actor to being in every scene and then having to cry in scenes, be on the toilet in scenes and do all these weird things I never have done with a camera before, you do need a lot of support,” Nathan says.

In making Kid Sister, Nathan looked to comedies like Feel Good, Ramy and Fleabag for inspiration – there are also echoes of Fleabag’s narration – as well as Lena Dunham’s “pretty flawless” HBO series Girls.

Having studied at NYU and lived in the US for seven years, she was also able to bring an American vibe to her writing and apply it to Kid Sister’s New Zealand setting.

“At its core, it’s a love story and it’s a family comedy, and its flavour is really original and unique,” she says. “There’s no other New Zealand Jewish show, so at least I can say I’m not just writing the same old thing. I’m trying to do something new, and hopefully people respond to it.”

The first episode of a potential second season, as well as a story outline, have now been completed as part of the application process for new funding to take the show forwards. “It’s really nerve-wracking to think that your story can get cut off before you finish telling it,” says Nathan. “When people sit down to watch your show, they’re taking a huge leap of faith and trust in you as a creative and saying, ‘Alright, you’ve got a story to tell me. I’m going to give you at least an hour-and-a-half of my time for you to tell what you want to tell.’ I feel like I’m kind of only starting that story and I want to tell the whole thing.”

Until a decision is made, Nathan will be working on the second season of Our Flag Means Death, on which she is an associate producer – a role that means she will be on set every day during filming. But one lesson she has learned from making Kid Sister is that scripts are never really done.

“There’s no such thing as a finished script. It is a constantly changing, little freaky particle that, when everybody else comes and adds their DNA to it, morphs and changes,” she says. “It’s about really making peace and embracing that it’ll never be finished. I guess I just didn’t know that going into it – and it’s actually quite stressful to think about. Controlling what you can control and letting go of what you can’t is probably a good lesson for me in the future.”