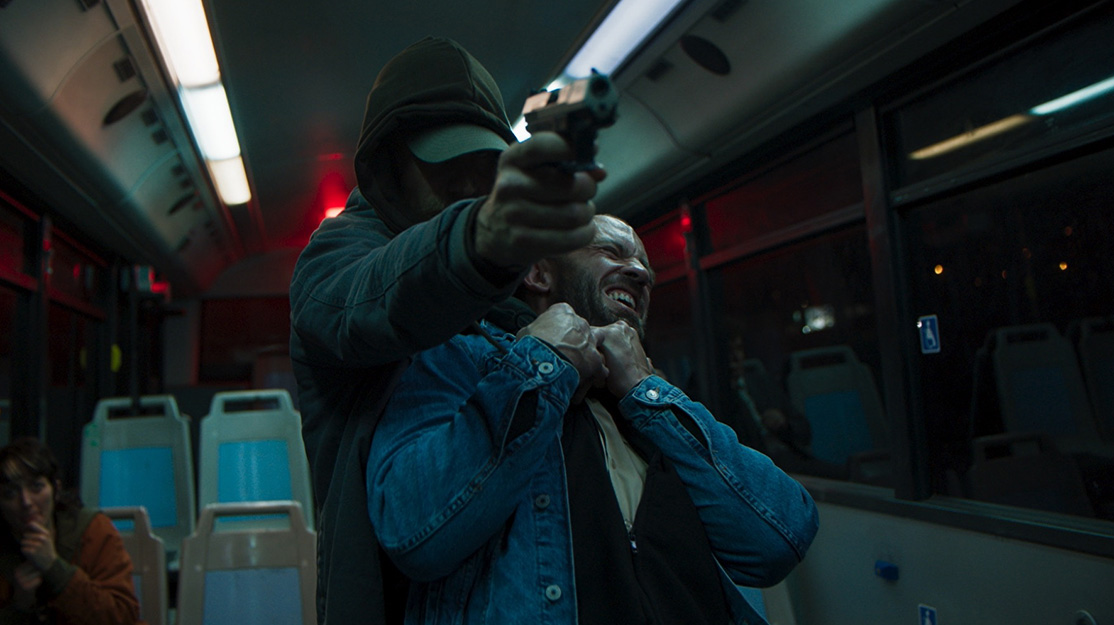 When three armed robbers are killed, witnesses claim they can’t identify the gunman in David Victori’s thrilling drama You Would Do It Too. He and executive producers Anxo Rodríguez and Anne Thomopoulos tell DQ about putting the audience at the centre of this innovative crime drama.

When police officers are called to an abandoned bus on the outskirts of Barcelona, they find three dead bodies onboard and a group of shell-shocked passengers. But it soon transpires that the victims are actually robbers who held those on board at gun point before their own weapons were used against them.

The whereabouts of the murderer, however, are unknown – and the six passengers appear unable to identify the suspect. But police officer Fran Garza (Pablo Molinero) and his co-worker (and ex-partner) Rebeca Quirós (Ana Polvorosa) suspect the witnesses are not telling the truth.

All of them swear they didn’t see the killer’s face, but the investigation suggests that the witnesses may have entered a “silence pact” to protect the fugitive, and the case soon goes viral with the public rallying behind the killer with the social media hashtag #YouWouldDoItToo.

It’s the central premise of a series that creator, writer and director David Victori hopes will lead viewers to ask themselves if they too would support the fugitive – so much so that the programme title, Tú también lo harías (You Would Do It Too), might as well have a question mark added to it.

“It’s a thriller, but David always put another layer of morality on top of that, so it appeals to you as an audience member because you think, ‘What are they going to do?’” says producer Anxo Rodríguez. “Is there right, is there wrong? You are going to be torn the whole way. It is a new kind of thriller we haven’t seen before.”

Due to debut on Disney+ in Spain this spring, the Spanish-language series is based on a real-life incident that took place in Mexico. Victori first read about it in a newspaper while he was living in LA and immediately began to think about the different ramifications posed by the premise.

“My imagination blew up,” he says. “What I really like about the story is that it’s not just a thriller with different twists, trying to surprise the audience. It’s more about your ethical position about what you are seeing. It’s a really complex project for the audience but in a really entertaining way. It’s not just tough and something you need to go deep into. It’s really entertaining and it goes fast, in a contemporary way, but slowly you enter into this world where everything becomes more complex all the time.”

Rodríguez highlights the dual narrative created by co-writers Victori and Jordi Vallejo that runs through the series, but this isn’t just about twin timelines. “There’s the plot narrative but there’s also a psychological narrative, and they’re intertwined in a very interesting way,” he explains. “Sometimes you’re watching things and you think you know what’s happening, but then you start to understand another point of view. It’s a very complex structure, but it’s really fascinating.”

The first episode introduces the premise of the series, as the police arrive on the scene and begin to question the witnesses. But if viewers think they know what they are watching from after that first instalment, Victori wants them to think again.

“The interesting thing about this project is half of the show seems it will go in one direction and then everything changes and it goes in a completely different direction,” he reveals. “We needed to get into the show really quickly because our attention spans are getting shorter and shorter. So we tried to design a first episode where we get you involved in a really fast way and then the second episode develops the characters and shows a little more of what we promise in the first episode. Then the fourth episode is when the first big twist happens and changes the point of view of the show.”

“I can say the fifth episode is going to get us an Emmy nomination,” Rodríguez claims. “It’s one scene, with no cuts, going from the past to the present back to the past and then the present. It’s really amazing and it’s the first time, at least in Spain, that something has been shot like this.

“It took a lot of effort from the whole crew but also from the actors, changing light as it goes [between timelines] so we had lots of people doing crazy things for three days in a row. The result is amazing.”

Victori adds: “I remember when I first explained what we wanted to do with the actors, we were talking with some of them and they were saying, ‘That day we thought you were completely crazy.’”

But crazy is exactly what Rodríguez’s Espotlight Media, which produces the series, was set up to do. The production arm of a talent agency, it was born “to let these crazy people do what they think is best, so we support the craziest things you’ve ever heard,” he says.

Someone who shared that philosophy is Anne Thomopoulos, an executive producer at Legendary Television, which distributes You Would Do It Too internationally. The Rome, Borgia and Versailles producer is a former executive at HBO, where the brief was also to support talent and give them space to their best work.

“Anxo’s philosophy is very consistent with ours and the proof is in the pudding,” she says. “David proved that supporting talent the way we have really pays off – and it doesn’t just pay off for the production entities but for the audience too, because it gives them something new and fresh to watch and helps David grow as a talent.

“Not only was David able to do something outside of what is normally permitted, but it allowed the actors to work in a way they aren’t often able to work and it really made for a very exciting process and created cohesion for both the crew and the cast.”

Victori has previously written and directed films including Cross the Line and The Pact, so he says it’s natural for him to take on both roles with You Would Do It Too, as he seeks a balance of entertainment and emotion.

He also likes to challenge his actors. At the beginning of production, he involved them in something he calls ‘off-air,’ where he shot scenes from episode one to seven without cutting over three-and-a-half hours in an effort to put his cast in the state of mind of their characters.

Victori also didn’t hand over the final script, meaning the cast didn’t know where their characters were heading until the very end, while he also kept some of them away from the set until it was time to start filming.

“Some witnesses did not see the police station until the day we shot it,” Rodríguez says. “They were really lost because they had no clue how one room led into another, so they had to go with the police in a very realistic way. He does that kind of craziness. Producing that is not easy – you need to think out of the box, but it was good fun.”

The producer describes maintaining continuity between episodes as the biggest challenge on the show, with significant numbers of extras, additional props and other materials weighing heavily on the budget. But Victori recalls the first day on board the bus as a particularly memorable moment.

“We started to drive through Barcelona and within two minutes the noise of the bus was crazy and we had never thought about that,” he says. “That was a huge issue and for weeks and weeks we were thinking how to do it because I didn’t want to do all this immersive work with the actors and then suddenly we have to go to a studio and dub all the acting we did. In the end, we fixed it in a crazy way because it was proposed that the bus runs without the engine, with a truck driving the bus in a controlled way.”

The director hopes viewers will be shocked when they reach the end of the series after being emotionally drawn into the story by its numerous twists and turns – just as the actors were when they finally learned how it will conclude.

“When we were shooting the end of the show, I remember two of the actors saying, ‘No, that’s not possible David. It’s too crazy.’ But it makes complete sense,” he says. “That’s the tricky thing about storytelling – arriving at a place you never expected to be but one that’s completely logical.”

“Everyone who watches it will think, ‘How did we end up here?’ But you don’t feel tricked at any time,” Thomopoulos says. “That’s the amazing part of it. Sometimes thrillers don’t make any sense or play some tricks. Here you never feel tricked. That’s the magic of this.