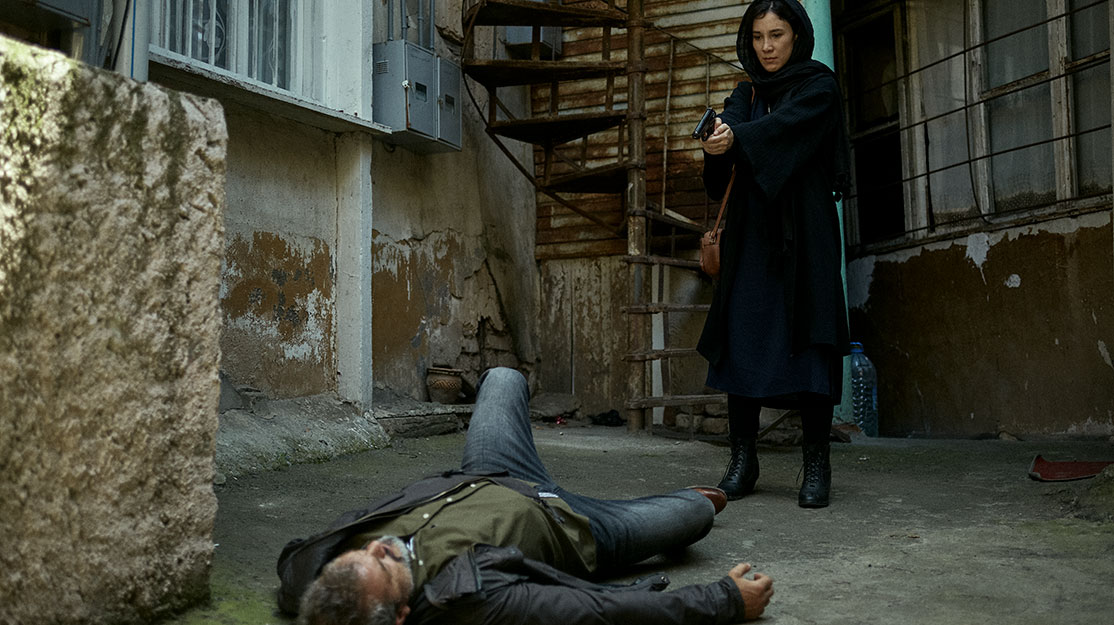 Alan Sim, executive producer of Bullets, explains why this Finnish series is an example of a high-end show that isn’t afraid to take risks to deliver a drama blending political themes, a complex storyline, flawed characters and shocking twists.

From the team behind The Bridge, The Killing and the Millennium trilogy that introduced Lisbeth Salander to the screen comes Bullets.

Described as a powerful, character-driven international thriller, the story plays out against the backdrop of Helsinki, Belgium’s criminal underworld and the troubled streets of Georgia.

The story centres on Mari, an intelligence officer who goes undercover to befriend an asylum seeker who has arrived in Finland and is of interest to the authorities, owing to the fact she is Madina Taburova, a former recruiter of suicide bombers and one of the most wanted terrorists in the world, who was previously assumed to be dead.

In the 10-episode series, Mari sets out to win Madin’s trust in a mission to find out why she has returned from the grave and uncover her intentions.

Produced by Vertigo and coproduced with Lumière and Nadcon, it launched earlier this year on Finnish OTT platform Elisa Viihde. Sky Vision distributes the series.

Here, Elisa executive producer Alan Sim tells DQ about developing the series, the writing and directing process and why it might appeal to international audiences.

What are the origins of Bullets?
Bullets was co-created by producer Minna Virtanen and writer Antti Pesonen. We started discussions with the producer about four years ago, and we thought it was a unique story that had to be told.

How did Elisa become involved? What was the appeal of the show?
Elisa became aware of the story through the producer, Vertigo. We knew Nadcon was also the coproducing partner from Germany and that the experience of Peter Nadermann, who was behind The Bridge and the Millennium trilogy, was going to be a great asset. We thought the story was topical, modern and had real edge.

How did you develop the series with the producers?
We believed in the writing, so we were keen to support the creative process from the writing through to the financing of the second window and distribution. We played a key role in finding the majority of the money for the series.

How does the series mix elements of crime, espionage and political drama?
The story is quite subtle. It draws you in, making you think you’re watching one thing, and then it pulls you deeper and deeper into a much bigger story. In many ways, it plays on our own beliefs and prejudices to make assumptions about the plot, which are constantly challenged. Our key characters wear many hats, so the lines of good and bad, right and wrong are blurred.

How does the show balance characterisation against a twist-laden plot?
The characterisation is key. All of our central characters have lost or are losing someone in their lives, and this theme is key to their drive and process. We unravel their personal stories delicately throughout the series and this blends perfectly with the plot.

What was the writing process like?
Actually very smooth. Finnish writer Antti Pesonen is actually based in the UK, so had written the treatments and scripts in English. So for myself, a Brit, and our American script editor, it was a fairly simple process.

What do stars Krista Kosonen (Mari) and Sibel Kekilli (Medina) bring to their roles?
They are both incredibly talented actors. What they do so well is in the small detail. They manage to pack such punch into small bites of dialogue, making scenes feel taut, tense and engaging. In this sense it feels very much like a Finnish series. They are not showy or flashy – all the emotions are bubbling just under the surface.

How would you describe the style and tone of the series?
It’s very stripped back. It’s bold without being over the top, and stylish without trying too hard. It’s without gimmicks.

How has director Pete Riski filmed the series?
He has kept it very clean, efficient and dry. Again, it’s not showy – it’s not saying ‘look at me.’ It’s very Finnish. It’s real, it’s believable. He’s done a great job of taking a tricky story and peeling back the layers episode after episode.

What locations appear in the series and how are they used?
We filmed mainly in and around Helsinki, but we also used Brussels as a backdrop. We shot some of the Russian scenes there and also travelled to Georgia, which doubled for Afghanistan and Chechnya.

What was the biggest challenge making the series and how was this overcome?
That’s a big question. With every production, there are challenges at every level, from delivery of the scripts to financing through to production issues and then a very tight delivery schedule. I think the answer to all of these is seeking compromises and finding solutions at every turn to keep the production on track.

Why does Bullets stand out among the huge number of series being produced?
We have seen very little of Finnish series internationally, so this is one of the first big series out of the blocks. People are waiting to see what’s new from the Nordics, and the Finns are producing some great work. It’s also a really challenging story and does a very difficult job of humanising a woman who is a terrorist. We see her as a three-dimensional character, not the two-dimensional depiction you get in the news. That makes the story unique and challenging.

Why would it appeal to international viewers?
People love crime drama and particularly crime drama from the Nordics. We have already seen a lot from Denmark and Sweden, so putting Finland on the map is interesting for International viewers. They are seeking out quality drama from new territories, and Bullets delivers this. Many of the viewers will also recognise Sibel Kekilli, aka Shae from Game of Thrones, so she is a big draw. This, coupled with having the team behind The Bridge and the Millennium trilogy, makes it internationally exciting.

How is Bullets an example of the stories Elisa wants to tell?
Elisa Viihde has a unique voice. We are looking for interesting, challenging stories that are compelling to watch, and we are not afraid to take risks to cover difficult and complex subjects. Bullets is a great example of this, combined with the highest possible production values, great casting and a fantastic script.