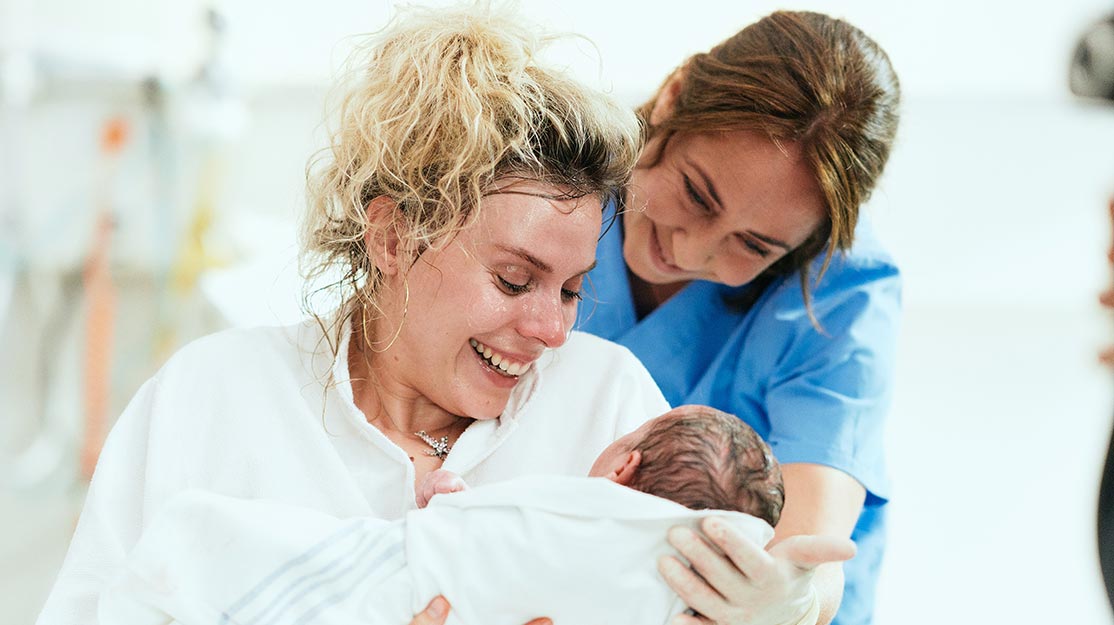 Danish filmmaker Lone Scherfig speaks to DQ about returning to television with medical drama The Shift, which follows the staff of a busy maternity ward, and why she wrote the lead for The Killing star Sofie Gråbøl.

As an Oscar-nominated director, Lone Scherfig has helmed acclaimed international features such as Italian for Beginners, One Day and An Education. For her latest project, she returns home to Denmark – and television – as the creator and head writer of hospital drama The Shift.

Set within a busy maternity ward, the series follows committed staff who face a daily roster of new patients while battling the pressures that come with their demanding roles. Among them is department head Ella, played by Sofie Gråbol (The Killing), who delivers babies while secretly wishing for her own family and struggling to form close relationships. Then there’s paediatrician Jerry (Pål Sverre Hagen), whose marriage is falling apart, a fact his religious community is not supposed to know.

Pitched as ‘Nordic Light,’ the TV2 series juggles workplace and relationship drama – “and there’s quite a few of both,” Scherfig tells DQ as the show is being edited. “Then, thematically, it gets very big because people come in and have their babies. It could be the happiest day of somebody’s life, the most dramatic day of somebody’s life, but it’s also a group portrait of colleagues and how the staff help one another, and some of them can’t cope anymore.

“It’s a multi-plot story, very character-based, where in every episode you have people coming in and having a baby, or not, in some cases. It’s also a portrait of the new young parents in Scandinavia and what world is it their children will grow up in.”

The opportunity to have multiple strands in a series is an advantage of working in television, “which I’m not so used to,” she admits. “But you have much longer plot strands, you can intertwine them, have some people exit, others step in and tell almost short stories within the format.

“We also never wanted to put a highly political drama into this, even if our national health service has been in focus a lot in the last few years. The problems they have [at the hospital] have to be solved by the government. They’re not something that can be solved on the ward.”

A workplace and relationship drama could have been sent in numerous arenas, but Scherfig says she was drawn to a medical setting, and a maternity ward in particular, because on the few occasions she has encountered this world she has been hugely impressed by the dedication of workers who spend their lives helping and comforting others, often under extreme difficulties.

Then when she spent a shift observing staff on a maternity unit in preparation for the series, she was “highly entertained and deeply moved. The atmosphere, the weight everything has, the humour. The plan wasn’t to do a hospital series, let alone one that has the potential to keep going on and on in different wards of the same hospital. But it was about the fact this would always be the most important day in the lives of the people who walk in the door. And they’re from all parts of society.”

Some of the actors in the show are real midwives or hospital workers, Scherfig reveals, while three people were originally actors and then became midwives.

“They say that hospital series are super complicated because it’s almost like an action film. You’re not aware of how much expertise it takes to have the cast keep their hands in the right place, even to put a pair of silicone gloves on, as if you’ve done it 2,500 times before. That was overwhelming. It sometimes is as complicated as doing a car crash on film, just on a smaller scale.”

When she started writing the series, Scherfig also wondered what it would be like to set a story entirely in one location. The show’s light, spacious and airy hospital set matches the architecture of some real-life hospital projects in Denmark, and also reflected the filmmaker’s cinematic ambitions for the series. The set also boasts an inner courtyard that is used to demonstrate the seasonal passage of time between episodes.

“I wanted to find out whether it would be frustrating to never be able to get out of there,” she says. “[Netflix prison drama] Orange is the New Black almost has the same structure but you go home [with the characters] and have flashbacks. This is very one-to-one. It’s pure and it’s a luxury because it’s an arena where you can really just focus on what happens there and never go, ‘Meanwhile, back at the ranch…’ There’s no way you can make time move just by moving the arena the way I always have done. It’s been interesting and we’re really proud of our set and the way it functioned.”

The series’ core cast comprises a couple of midwives, some doctors, an anaesthesiologist, a gynaecologist and a surgeon, who viewers will learn more about over the course of the eight-episode season that, for reasons that will be revealed in episode one, plays out over a nine-month period.

At the forefront is Ella, who at first appears to be quite a lonely person and must put up with working with her mother at the same hospital. She also works with her lover, adding to the complex relationships that run through the drama. In fact, Scherfig specifically wrote the role for Gråbøl, who also visited a maternity ward in preparation.

“She sat during an entire birth with a woman who never knew who she was and who she will probably never meet again,” the writer says. “She said she was an intern – and she was! But we were all almost obsessed with the real maternity ward and every time someone was there, they came back feeling the series was interesting and important.

“I’ve often done period [films] and I love working in countries that are not my own. This is something that happens right around the corner with people whose experiences are a lot like some of mine. It’s much closer to me than what I’ve done normally.”

Scherfig’s relationship with Gråbøl dates back to one of the director’s first jobs as a script supervisor, with a young Gråbøl among the cast. They later worked together again on a TV series where the actor had a small role, with The Shift marking the first time Gråbøl has led the cast of a Scherfig project.

“She is a master of close-ups. There’s so much depth in her acting and knowledge about the character that you can just do facets and nuances that are extraordinary. It makes her super interesting to watch,” Scherfig says. “Of course, it is because she’s well-prepared, very disciplined and very experienced. She started at a very young age, and she’s a sweet person.

“It’s been a very good group [on The Shift] and they’ve collaborated really well. As our number one on the call sheet, Sofie is a good person who means well and has a very high standard of how she treats other people. It’s not just that she is a great actress, but also that she is good at making all the rest become the good cast that they should be. It’s a small country, and, of course, many of them already know each other and are already friends.”

Writing the series in less than a year, Scherfig admits she is “always looking for a really good script somebody else wrote” that she might direct, though she’s no stranger to writing her own material. Her script credits include Italian for Beginners, Just Like Home and The Kindness of Strangers.

“But I have more confidence as a director than as a writer,” she continues. “Actually, I just started writing it to find out how would it be, to see how does it work. How do these characters walk and talk and what’s the rhythm? Then I enjoyed it, I kept writing, and then we had some quite new writers also working on it and I ended up rewriting all the scripts, but I think it comes with being a showrunner.”

Throughout the writing process, the central principle to writing the series is that while the stories of the hospital staff play out, the numerous characters who visit the hospital in each episode will change the life of a staff member in some way.

“Probably the hardest part [in a series] where everybody has the same job is to give the characters depth and individuality and steer clear of cliches, so they are actual characters you haven’t met on television before,” Scherfig notes. “There’s so much built-in tragedy when you are in a place where people die and give birth. People coming in to give birth bring lots of problems with them as they walk in the door. But you also have to make sure this series has hope and light and that it doesn’t have this Nordic noir feel at all. It’s quite cheerful at times.”

“He’s worked on all the Danish projects I’ve done. There aren’t that many people who could do what he has done,” she says of working with Balle. “But he also has a really good taste and sense of colour. He’s a true minimalist. They’re very few props and every prop has to have significance. Then, of course, you have all this Scandinavian furniture! Soren created this quite transparent set where you hopefully can’t really see where it begins or ends, and that sense that you are in a section of a much bigger place.”

It was an anaesthesiologist who helped with fact checking, researching and helping the cast perform tasks such as injections who told Scherfig she has “a big burning heart for the public health care system.” It’s no wonder, then, the filmmaker thinks of The Shift as a thank-you to “all the people who put their entire lives into helping the rest of us.” That gesture is not limited to doctors and nurses, but teachers, police officers and other public officials.

Ahead of The Shift’s launch in the spring, Scherfig is already thinking about a potential second season and the chance to reunite with characters she has grown particularly fond of, with personality traits, such as sacrificing yourself for others, that she wishes she had.

“I’m not done with it. There are characters in this who I just could not say goodbye to,” she says. “I stopped shooting just a couple of weeks ago and I have this feeling that I wish they existed. I wish I could call up this fictional character and have coffee or something. It’s really weird.”