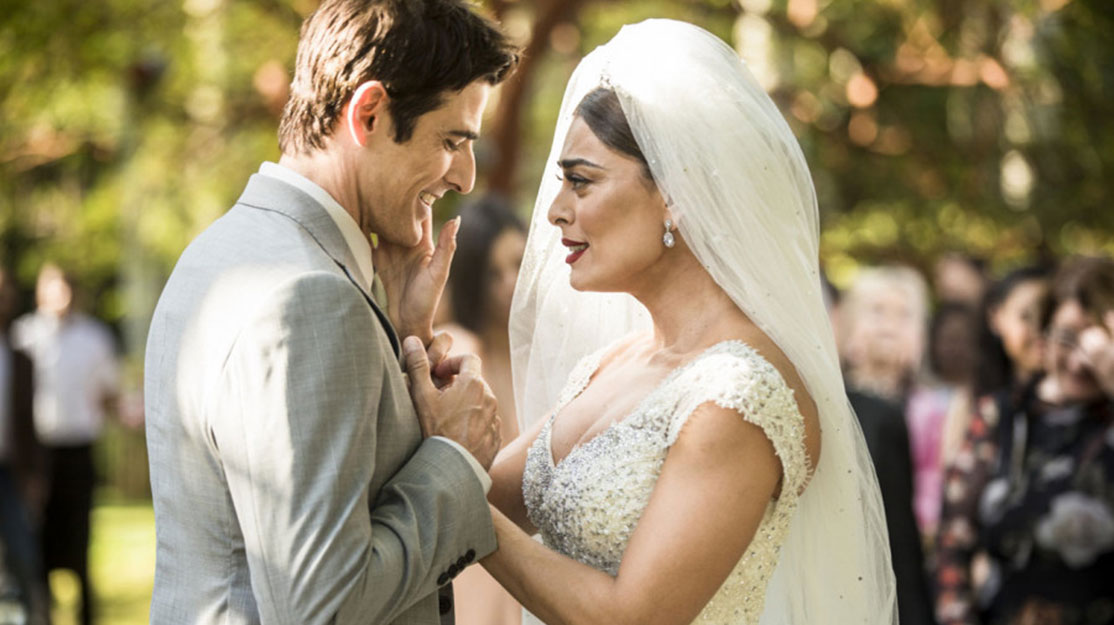 Reynaldo Gianecchini, one of the stars of Brazilian melodrama Dulce Ambición (Sweet Diva), and director Amora Mautner open up about making the telenovela and its take on the classic Romeo & Juliet love story.

More than 55 million people tuned in for the final chapter of Dulce Ambición (Sweet Diva), concluding this story of a pastry chef’s struggle to get past tragedy and win over her daughter.

Writer Walcyr Carrasco (The Other Side of Paradise, Hidden Truths) describes the 130-part series as “a telenovela about courage, hope and overcoming with lots of positive energy,” in which Juliana Paes plays Maria da Paz, who was born and raised in a family of professional killers in the countryside of Espírito Santo, where she learns to cook alongside her grandmother Dulce (Fernanda Montenegro).

She later meets Amadeu, the great love of her life and a member of rival family. Willing to fight the hatred of both families, Maria and Amadeu propose a peace agreement and decide to get married – but on their wedding day, Amadeu is shot dead. Fearing for her life, she flees to São Paulo, where she discovers she is pregnant and then uses her baking skills to become a successful baker.

Ten years later, after building a successful company and making a fortune, Maria faces the wrath of her daughter Josiane (Agatha Moreira), who does not like her mother’s behaviour and decides to partner bon vivant Régis (Reynaldo Gianecchini) in an effort to take control of her fortune.

Reynaldo, how does Régis fit into the story?
Reynaldo Gianecchini: My character comes from a traditional failed family. Even without possessions, he is a bon vivant and wants to live at the expense of his family, his brother-in-law and then of Maria da Paz.
Despite his dubious character, he is very outgoing and knows how to deal with people. He is a charming guy, which he uses to win everyone over and achieve good things in life. In other words, being part of high society in spite of not belonging to it any longer.
When he meets Josiane (Agatha Moreira), they are immediately attracted to each other because they are so similar and have so much in common. They form a dangerous duo who use people to get what they want.

How were you cast in the telenovela?
Gianecchini: I was invited to be in the telenovela by Walcyr Carrasco himself. He was writing the character thinking of me, and I was very happy because I had been waiting for the opportunity to work with Amora [Mautner, director] for a long time. So it was a great moment, a gathering of people with whom I wanted to work.

How did you approach the role? Did you do any research or specific preparation?
Gianecchini: In telenovelas, there is not much time to prepare because we know very little about the characters in the beginning. They are written little by little. We have few written episodes when we start shooting, so we only have a notion of how the character’s personality will be, but many things will still happen to him.
In the case of Régis, I went through physical preparation because he was a tennis player. I tried to understand a little about the universe of tennis players and the practice of this sport. Also, I took some references from films and watched some seductive playboys and bon vivants.

How did you work with the directors on set?
Gianecchini: It was a very pleasant experience because our colleagues were always very excited and talented. Walcyr’s telenovelas are always fun because they have a lot of twists. Régis, for example, went through a lot of phases. We could not count on a particular style for him, as there are many things that happen to a character. But the mood was really good; everybody was happy and satisfied. The characters were good and the direction was great, so the overall mood contributed to the final result.

The telenovela is inspired by William Shakespeare’s Romeo & Juliet. How does it put a fresh twist on this classic story?
Amora Mautner: The author was not only inspired by the Shakespearean classic, but also by Blood Wedding, a play from 1932 by Spanish playwright Federico García Lorca. The fight between the two rival families are characteristic of Romeo & Juliet, but the new aspect of the story is the professional killers, who are still a reality in some regions of the country. Despite the relationship with Shakespeare, the telenovela has a happier, lighter aura, full of love and hope.

What challenges did you face, either in preparation or in production?
Gianecchini: The challenges of a telenovela are very similar: it is the art of doing what we can within the little time we have. But it is a very cool exercise.

Why do you think Sweet Diva appealed to so many viewers in Brazil?
Mautner: The story is very engaging; it brings many characters that represent our audience and make us want to watch the story until the end. We can feel this energy both in the text and in the essence of the telenovela. We have a lot of supporting stories that also engage the audience.

How does Sweet Diva compare to other Brazilian telenovelas being produced?
Mautner: The telenovela is a classic melodrama. We have all the elements of a traditional telenovela. These are very straightforward characters, from the heroes to the villains. And one of the things that drew my attention to this telenovela was female empowerment. We have worked on that very strongly and positively in all characters, but especially in the protagonist, Maria da Paz.
The text already has a lighter atmosphere, with a hopeful tone. This aspect is very strong in the text, and we also wrote it that way for the producers.

Why might Sweet Diva also appeal to international viewers?
Gianecchini: It is a very dynamic telenovela; things happen all the time. All the characters are very good, and people can easily relate to them. They are all human. They are not overly simplified: nobody is fully good or bad, as it is in real life. And there is a dynamic where things change quickly. The plots make you want to keep watching; you want to know what the next step will be for the characters.

What do you think of the international interest in Brazilian drama?
Gianecchini: We Brazilians – and especially Globo – have strong knowhow when it comes to making telenovelas, series and limited series. They are made with a degree of quality that is not common around the world, and I think this awakens the international interest.
Television, in general, is going through a very good moment in terms of creative scripts and stories. Brazil has always come up with very creative plots. This also makes other countries very interested in our work.

What are you working on next?
Gianecchini: My projects for the next year are a theatre play, a beautiful project based on the movie Eternal Sunshine of the Spotless Mind, and then, at the end of the year, I will start preparing to go back to TV with Hidden Truths 2 [also written by Walcyr Carrasco]. I am looking forward to this one because [the first series] was an astonishing work – maybe one of the best works by Globo. I am curious to know how this sequel will be.