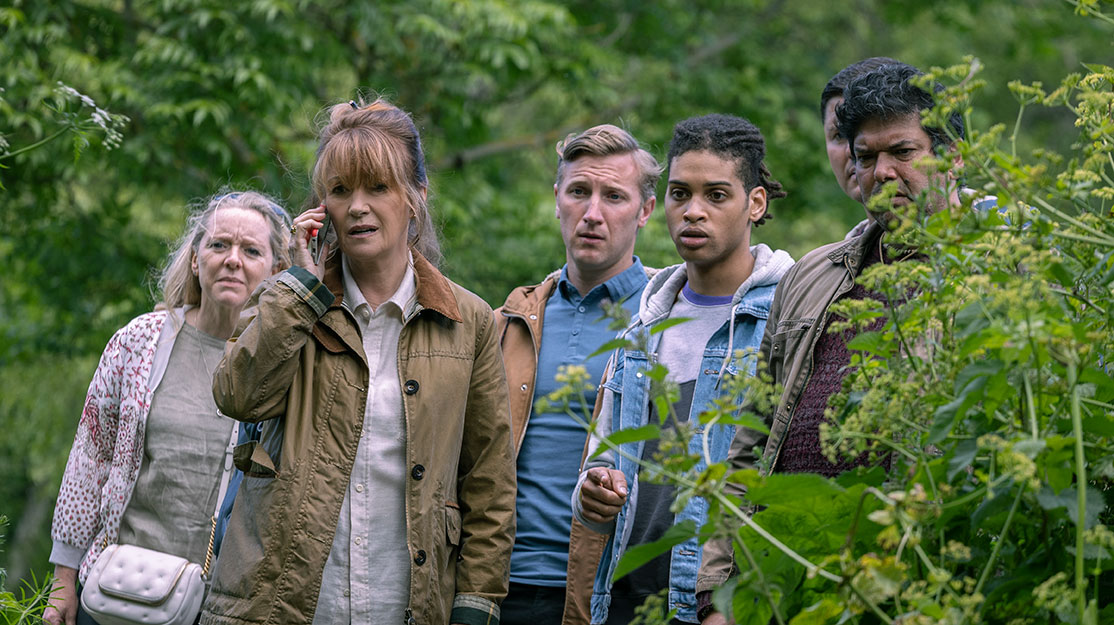 Harry Wild star Jane Seymour reflects on a career spanning 50 years on screen, her breakthrough roles and showing her comedic side.

From movie roles in Somewhere in Time and James Bond thriller Live & Let Die to playing the title character in long-running period medical drama Dr. Quinn, Medicine Woman, Jane Seymour has been a screen presence for more than 50 years.

The English-born actor, who now resides in Malibu, first appeared in TV series such as The Pathfinders and The Strauss Family before landing the role of Solitaire opposite Roger Moore in 1973’s Live & Let Die. Our Mutual Friend, Battlestar Galactica, East of Eden and feature The Scarlett Pimpernel followed, before Seymour played Dr Michaela Quinn for almost 150 episodes in Dr. Quinn, Medicine Woman. Set in 1867, the series centred on a wealthy female physician from Boston who heads west to Colorado Springs to set up her own practice.

More recently, the Emmy-winning actor has appeared in series The Kosminsky Method, B Positive, Jane the Virgin and Hooten & the Lady.

Now, Seymour is starring in Irish mystery thriller Harry Wild, in which she plays the titular retired English professor who cannot help but interfere in the cases assigned to her police detective son. The Acorn TV and ZDF series debuted in April and has been renewed for a second season, with broadcasters including TV4 Sweden, TV2 Norway, MTV3 Finland, TV2 Denmark, Mediaset Italy, OTE Greece and AXN Mystery in Japan acquiring the show from distributor Dynamic Television. Dynamic produces the series with Metropolitan Films.

Speaking to DQ at the Monte Carlo Television Festival, Seymour looks back on her screen career, explains why she’s working more than ever and discusses moving into comedy and how she enjoys working with her co-stars.

How do you look at television now compared with the 1980s and 1990s?
Well, I think what’s fantastic now is that you don’t have to worry about commercials. You don’t have to worry about standards and practices. With streaming, you can have any kind of material you like, and I think that’s very healthy. If you’re looking for children’s stuff or something vocational, or you want a hardcore whatever it is, you can find it. It’s there.

What’s really great is that even if you do a network show like I did with B Positive [on CBS], that then goes on to Paramount+. So if you miss it when it comes out, you can still watch it. I used to do a lot of series that were fantastic, but you had to wait 32 weeks for them. Now you can watch it all.

You’ve been very busy in recent years. How do you define this period of your career?
Unbelievable. My agent tells me that I work more than almost any of his clients. Especially during Covid – he said he couldn’t believe it. He said, ‘No one’s working more than you. Even working in a country that’s closed, you’re starring in a movie in Australia.’ I’ve been very fortunate and, mercifully, healthy. I enjoy my work and I’ve got some really well-written, beautiful material. That’s what I look for.

Do you find there are increasing opportunities for older actors on screen?
It’s unheard of. I’m doing a lot of comedy. I’m not afraid to look ugly or behave really stupidly, and people like seeing me do that. The show I have right now, Harry Wild, is a combination of something pretty intelligent but also very funny. And of course, it’s a crime series.

Harry Wild has been renewed for a second season. Why has it been a hit?
The success of Harry Wild is that almost every woman would secretly like to be Harry. It’s in the same way that, after Dr. Quinn, all these women became doctors. There are a lot of secret Harrys in a lot of women – they get to go down the pub and drink too much wine and say ‘I like that guy, he’s cute.’ It’s today’s day and age with an older woman doing it her way, and it’s beautifully written.

What’s behind your recent run of comedy series?
I’ve always been comedic anyway. It’s just that I was never hired to do it. I was cast either to play virgins or ingénues and, because I looked a little bit exotic, they said, ‘You can’t play the woman next to the girl next door.’ So I came to America when I was 26 and they said, ‘If you can lose your English accent, you’ll never stop working in America.’ And it was true. I gave myself six weeks to make it. I got my first job six weeks in and then I got an Emmy nomination for best actress [for NBC’s 1976 limited series Captains & The Kings].

Was that your breakthrough moment then?
There have been so many breakthroughs. I would say [1971 historical drama] The Onedin Line was a breakthrough, and they put me on it to take over from someone else. The producer said to my agent, ‘I’m directing the first episode, she’ll be in it and, if I like her, I’ll let you know and maybe she can do the rest of the series.’ He called up after the first day and said, ‘She’s in the series.’ Then the Bond people saw me in that and that’s how [I got a role in Live & Let Die] – no audition, just straight to James Bond.

Then after that, I don’t think I auditioned for anything until [2005 comedy movie] Wedding Crashers, so I didn’t know how to audition. I’m going, ‘I’m doing what? I’m acting to this little tiny camera. I’m playing the woman Owen Wilson is seducing. This is a bit awkward.’ But I did my best. And then the director called that night said, ‘Can you up the sexuality?’ I said, ‘Yeah, if you give me a guy to play up to.’ So the next day, they gave me the hottest guy I’ve ever seen. I’m like, ‘I think this is illegal.’ Then I come in and I do it with them and I get the part. But then the funniest part was that they kept saying, ‘Oh, you’re amazing. You’re great. And I saw you in James Bond.’ It’s like I did nothing for 50 years. After that, I had a big comedy career.

When have you enjoyed the best atmosphere on set?
I fell madly in love with Christopher Reeve on [1980 feature] Somewhere in Time, and we were on a beautiful, magical island where you had a bicycle and no cars and everything was slow-paced and it was beautiful. It was like being in an impressionist painting, and that was magic. I had a wonderful time. And then on Harry Wild, just now, I had the best time. The actors were incredible and the directors were great because I was also producing. If I wanted to try something different, I could. And we just knew we were doing good work. It was like a big team.

How involved are you behind the scenes?
Well, I have some projects where I’m actually producing and raising the money and developing the scripts. On Harry Wild, they’d already written it but I got very involved with the writer. Now he knows me so well that he writes me better than I can write me. It’s just seamless, so I don’t really have to do very much on that. I don’t have to raise the money and I don’t have to tell the crew what time to be there. But I do lead the charge, as it were, by being on time. I keep everybody, all the actors, able to do their best work.

Would you like to direct?
I’ve been doing it, just without a credit, for many, many years. I go to the other actors, especially the ones who are coming in for one or two days, and I’ll say, ‘Oh, my gosh, I’m tired. Do you mind if we run some lines?’ I do it like that. And they go, ‘Oh, yeah, sure.’ They’re so relieved because usually they’re going to be waiting, then they get nervous and they’re afraid they’re going to forget their lines. But now we do it together. We play around with it, we’re joking. By the time we go on set, they’re ready and we now know what we can do. We’ve warmed up.

There have been times on films where I’ve worked with an actress and they just can’t do it. They have a real problem. And the director will kind of look at me like, ‘What are you going to do?’ I’ll ask the actress if she wants to have lunch with me and then we get together and I start playing some acting games with her and stuff. Then I say, ‘Can you run some lines with me,’ and I share some ideas. They go back and then the director goes, ‘Well, what just happened here?’ I know that if I were directing, I’d know how to make them feel safe.

How do you look back on Dr. Quinn and the legacy of that show?
It’s interesting. A lot of people in America, the younger generation, never saw it. They don’t know me from Dr. Quinn, they know me from Wedding Crashers. So each generation has a different thing they know me for. For some people it’s Harry Wild and for others it’s The Scarlet Pimpernel. They’ve started putting my old films on Acorn – they think that while [viewers are] waiting for the next series [of Harry Wild], they might as well watch some of the stuff they missed the first time.