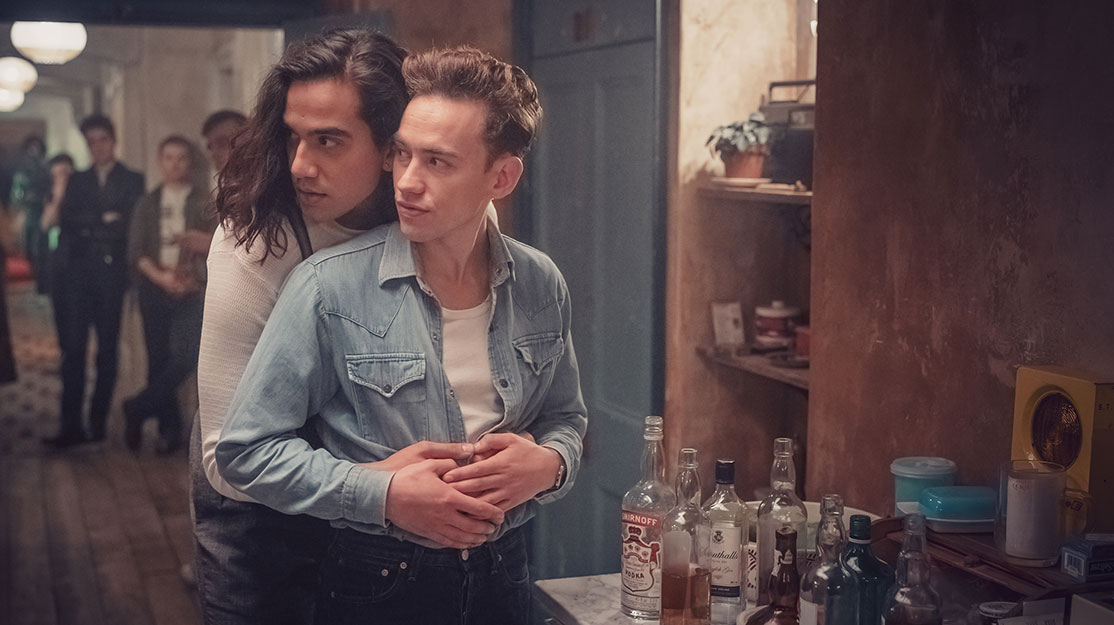 DQ looks back over the past year of television to pick out 10 series that were worth tuning in for, from a gripping prison-set drama and a genre-bending true crime story to a punk rock comedy and a certain Korean series that took the world by storm. 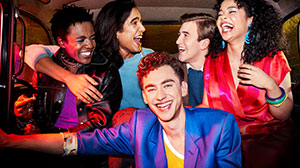 It’s A Sin
From: UK
Original broadcaster: Channel 4
Starring: Olly Alexander, Lydia West, Omari Douglas, Callum Scott Howells, Nathaniel Curtis, Keeley Hawes, Stephen Fry, Neil Patrick Harris, Tracy Ann Oberman and Shaun Dooley
They say: A five-part drama that follows the story of the 1980s and the AIDs epidemic, charting the joy and heartbreak of a group of friends across a decade in which everything changed.
We say: From multi-Bafta-winning writer Russell T Davies, this humorous, heartwarming and deeply moving drama debuted in January and instantly became one of the series of 2021. Suitably, it has already been picking up awards, with many more certainly on the horizon.
Read more here 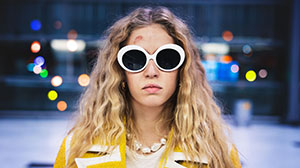 Kamikaze
From: Denmark
Original broadcaster: HBO Max
Starring: Marie Reuther, Charlotte Munck, Johan Rheborg, Mads Reuther, Aleksandr Kuznetsov, Carla Philip Røder, Vidhi Kastebo, Casper Kjær and Anders Mattheson
They say: A moving drama following the fierce and charming 18-year-old Julie (Reuther) on a journey of rediscovery after losing her parents and brother in a plane crash.
We say: Breaking traditions of structure and form, this series delivers a standout performance from its lead in the emotional but often funny story of a woman left wondering whether life is worth living.
Read more here 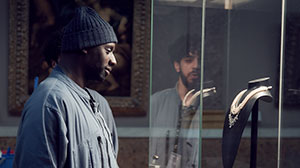 Lupin
From: France
Original broadcaster: Netflix
Starring: Omar Sy, Hervé Pierre, Nicole Garcia, Clotilde Hesme, Ludivine Sagnier, Antoine Gouy, Shirine Boutella and Soufiane Guerrab
They say: As a teenager, Assane Diop’s life was turned upside down when his father died after being accused of a crime he didn’t commit. Twenty-five years later, Assane seeks to avenge his father.
We say: Inspired by author Maurice Leblanc’s creation Arsène Lupin, Gentleman Burglar, this series dared to be inventive with a fresh take on a literary adaptation, while the clever plotting never failed to surprise as Assane’s tricks were revealed.
Read more here 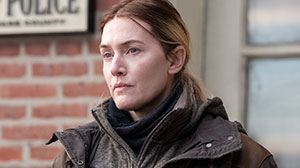 Mare of Easttown
From: US
Original broadcaster: HBO
Starring: Kate Winslet, Julianne Nicholson, Jean Smart, Angourie Rice, Evan Peters, Guy Pearce, David Denman, Joe Tippett, Cailee Spaeny, John Douglas Thompson, Patrick Murney, James McArdle, Sosie Bacon and Neal Huff
They say: An exploration of the dark side of a close community and an authentic examination of how family and past tragedies can define our present.
We say: Winslet gives an award-winning performance as small-town Detective Mare Sheehan, who is tasked with solving a missing person’s case, but this series is less about solving the crime than its depiction of a close-knit community and the tensions bubbling under its fragile surface.
Read more here 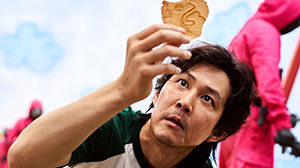 Squid Game
From: Korea
Original broadcaster: Netflix
Starring: Lee Jung-jae, Park Hae-soo, Oh Young-soo, Wi Ha-joon, Jung Ho-yeon, Heo Sung-tae, Anupam Tripathi and Kim Joo-ryoung
They say: 456 desperate contestants compete with each other in a mysterious and deadly survival game involving multiple rounds of childhood games to win prize money worth 45.6 billion won (US$38.4bn) that could pull them out of their misery.
We say: It took writer and director Hwang Dong-hyuk a decade to bring this series to the screen, but it was worth the wait as it became a global sensation this year. Brutally violent in the way the eventual winner is selected, Squid Game also spoke about the pressures of Korea’s debt crisis – a theme that would resonate around the world.
Read more here 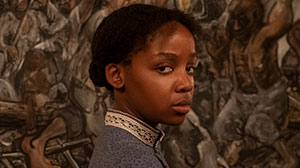 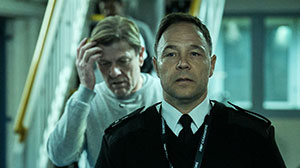 Time
From: UK
Original broadcaster: BBC
Starring: Sean Bean, Stephen Graham, Siobhan Finneran, Sue Johnston, Hannah Walters, David Calder, Nadine Marshall, Michael Socha, Aneurin Barnard, Jack McMullen and James Nelson-Joyce
They say: Mark Cobden (Bean) is newly imprisoned, consumed by guilt over his crime, and way out of his depth in the volatile world of prison life. He meets Eric McNally (Graham), an excellent prison officer doing his best to protect those in his charge. However, when one of the most dangerous inmates identifies his weakness, Eric faces an impossible choice between his principles and his family.
We say: Jimmy McGovern’s emotional thriller pulls no punches in its harsh depiction of prison life, while Bean and Graham’s compelling performances keep you on the edge of your seat.
Read more here 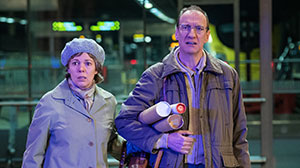 Landscapers
From: UK
Original broadcaster: BBC
Starring: Olivia Colman, David Thewlis, Kate O’Flynn, Dipo Ola, Samuel Anderson, David Hayman, Felicity Montagu and Daniel Rigby
They say: A unique love story involving a seemingly ordinary couple who become the focus of an extraordinary investigation after a pair of dead bodies are discovered in the back garden of a house in Nottingham.
We say: Inspired by real events, this series breaks the mould as writer Ed Sinclair and director Will Sharpe blend true crime with fantasy, romance and an imaginative visual style, while Colman and Thewlis lead a super ensemble cast that brings humour, heart and emotion to the central couple and the police officers investigating them.
Read more here 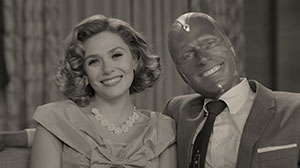 WandaVision
From: US
Original broadcaster: Disney+
Starring: Elizabeth Olsen, Paul Bettany, Kathryn Hahn, Kat Dennings, Evan Peters, Teyonah Parris and Randall Park
They say: A blend of classic television and the Marvel Cinematic Universe (MCU) in which Wanda Maximoff (Olsen) and Vision (Bettany) – two super-powered beings living idealised suburban lives – begin to suspect that everything is not as it seems.
We say: What ultimately turns out to be a poignant study of grief, WandaVision was the first Marvel Studios series to arrive on Disney+ this year and immediately confounded expectations with its combination of pinpoint recreations of classic television sitcoms and the humour and characterisation fans have come to expect from MCU on the big screen.
Read more here 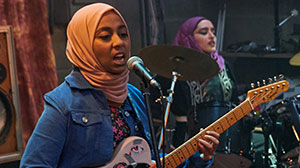 We Are Lady Parts
From: UK
Original broadcaster: Channel 4 (UK) and Peacock (US)
Starring: Anjana Vasan, Sarah Kameela Impey, Juliette Motamed, Faith Omole, Lucie Shorthouse, Zaqi Ismail and Aiysha Hart
They say: An exuberant music comedy following a Muslim female punk band who are on a mission to find a lead guitarist and maybe get a proper gig.
We say: Featuring original songs and some eye-catching covers, the series came from writer-director Nida Manzoor, who drew on her own experiences in a bid to upend stereotypes about women and identity, creating a band of unique characters and a story that blends music, romance, friendship, dream sequences and lots of laughs.
Read more here