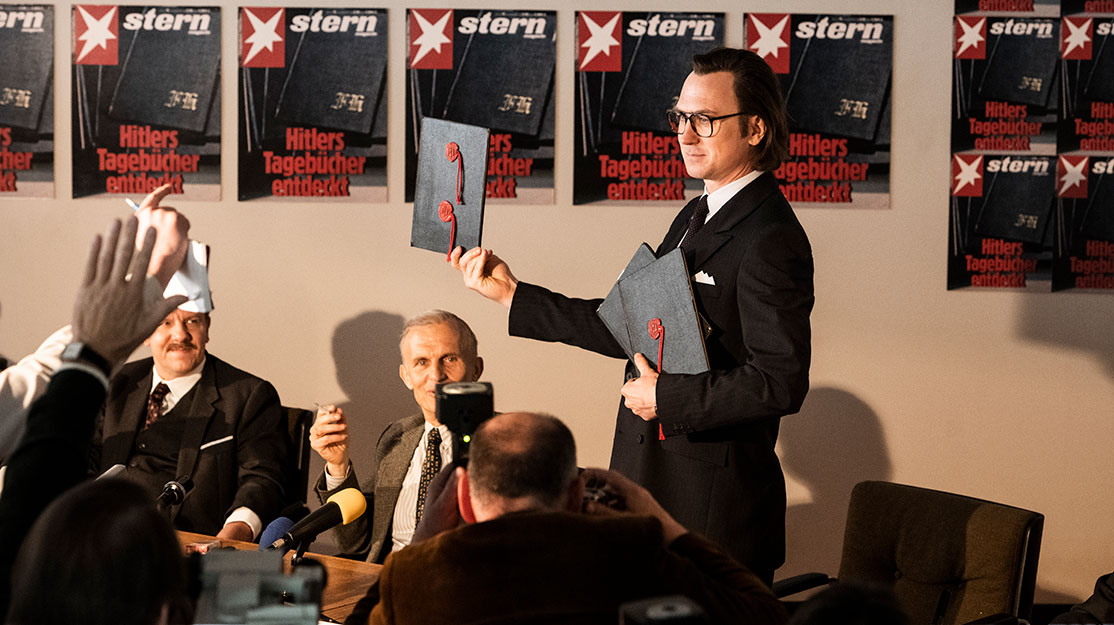 Faking Hitler showrunner Tommy Wosch reveals why he was inspired to dramatise this true story of events surrounding the publication of Adolf Hitler’s supposed diaries, which were revealed as forgeries.

In 1983, German newspaper Stern published what it claimed were extracts from Adolf Hitler’s secret diaries, much to the fascination of the public. But just days later, experts exposed the diaries as fakes.

In streamer RTL+’s original series Faking Hitler, events surrounding the publication of the ‘diaries’ have now been dramatised in an exploration of contemporary themes such as sensationalism and fake news.

When journalist Gerd Heidemann hears of diaries said to have been written by Hitler, he can’t resist the scoop of the century. Except the work is the creation of charismatic art dealer, petty criminal and prolific forger Konrad Kujau. When Heidemann tracks him down he is convinced they are genuine and when Kujau says he has many more volumes Heidemann convinces respected magazine Stern to pay a huge sum for them. Only rookie reporter Elisabeth Stöckel questions whether the diaries are real.

The six-part series, which launched on November 30 following its world premiere at the Cologne Film Festival, is produced by UFA Fiction (Deutschland trilogy, Generation War) and distributed internationally by Fremantle. It is inspired by the podcast of the same name.

Showrunner Tommy Wosch tells DQ why he was inspired to bring this true story to the screen.

What are the origins of the project?
I grew up in Bavaria in the early 1980s. Our pubs had pictures of SS soldiers on their walls with ‘Unsere Helden’ (Our Heroes) written underneath. At the outdoor swimming pool, leg amputees bragged about the atrocities they had committed during the Second World War. The nearest barracks was named after a Nazi general who was also called the ‘Bloodhound of Lemberg.’ I did not feel like I lived in a denazified country, and I still don’t feel that today. My whole life, I have asked myself questions like: How much National Socialism is there in our society? How many xenophobes and antisemites live among us and, above all, where? Is right-wing radicalism really limited to fringe groups, or is there a deep-rooted right-wing radicalism in the middle of society?

I wanted to address these questions on a fictional basis. The story about the forged Hitler diaries seemed like an ideal starting point. In a society where even a left-liberal magazine publishes historical revisionism, you basically have to expect right-wing radicalism everywhere.

Why were you interested in dramatising the story of the Hitler Diaries for television?
I wanted to film the story as a drama because it is a drama. Imagine if the books had not been exposed as forgeries. That would have been another intolerable crime against the victims of National Socialism.

How do we follow Gerd Heidemann and Konrad Kujau through the story?
Following Kujau is relatively easy because his motivation seems so clear. He forges books in order to make as much money as possible as quickly as possible. With Heidemann, things are a bit more complicated. Did he really have no idea that the books had to be a fake? It’s almost unimaginable how amateurish some of the forgeries were.

How does Heidemann and Kujau’s relationship run alongside the story of Elisabeth Stöckel and Leo Gold?
In order to fully deal with the topic of ‘National Socialism in our society,’ we naturally had to address National Socialism in our own families. I was born in 1968 and we children often asked ourselves what our grandfathers did during the war. We asked our fathers whether they had asked their fathers. There were rarely any straightforward answers. They referred to the oath that the soldiers had to take; to the fact that there were a lot of things people didn’t know; and above all that it all happened such a long time ago.

We relate all these impressions through the character Elisabeth Stöckel [Sinje Irslinger], a young reporter at Stern. She learns that her father was in the SS, then she is blackmailed with her father’s past to get her to prevent the publication of the diaries. Elisabeth acts as a moral compass in a thoroughly immoral world of men and, together with Leo Gold, tries to prevent the publication of the diaries. Over the six episodes, the narrative strands of Heidemann and Kujau, as well as Elisabeth and Gold, converge more and more.

How was the show developed with RTL?
I admit I’ve never sold a project as quickly and bindingly as Faking Hitler to RTL. We had a pitch meeting in Cologne, I told our colleagues there that I wanted to dramatise the topic as a high-end series and put the whole thing under the overarching theme of seduction. A day later, we got the green light. I really like to thank our partners at RTL for their commitment and also the magazine Stern for their support.

What kind of research did you do into the real events? Did you speak to any of the real people involved?
Over the past few years, my team and I researched really everything there is to research about this story – tape recordings, court decisions, archives, documents, eyewitnesses. I myself spent many hours perusing Gerd Heidemann’s basement archives. This resulted in hours of interviews that served as inspiration for me and my colleagues during the writing process.

Gerd Heidemann is a great storyteller and he has a lot of stories to tell. In 1999, I interviewed Konrad Kujau for my TV show Deutschlands dümmste Gauner (Germany’s Dumbest Crooks). Kujau was anything but a dumb crook. He was very engaging, charismatic and really talented. He was able to replicate the handwriting of all our team members within a very short time. That kind of thing was fun for him, and for everyone else, of course. Talking to him, I had the impression that he was constantly lying. He seemed to lie as soon as he opened his mouth, reflexively and zestfully.

What was the writing process behind the series?
I worked on this series with different colleagues at different stages. It all started with a one-week writers’ room in Bietigheim-Bissingen, the village where Kujau forged the books.

How did you cast the main roles?
I met Lars Eidinger 20 years ago, at an audition for a sketch show. I was an absolute beginner as a director, Lars an unknown actor. It was an incredible project. The audition took place in my kitchen. Lars and I kept in touch [but] I never had a project that I could seriously offer him. With Faking Hitler, it finally happened. In Schtonk!, a 1983 film about the hoax, the character Heidemann was played by Götz George, one of the best German actors of his generation. I was overjoyed when Lars, one of the best German actors of his generation, accepted the role.

As a team, we quickly agreed on Moritz Bleibtreu. I think he is outstanding as Kujau. Moritz has given the character a very clear and partly comedic direction, but took every opportunity to give it more complexity and go deeper. I have never seen this mixture executed so perfectly, and for that I am very grateful to Moritz, and to the two directors, too, of course. I had worked with Sinje Irslinger on my last cinema project, and during the writing of the scripts it already was clear to me that Sinje would play Elisabeth and that she would do a great job.

Does the series have a particular visual style?
We explicitly decided not to produce a visual museum of the 1980s. We do without the ubiquitous beards, sideburns, Mohawks, poppers and punks. As far as the production design is concerned, we equipped many of the sets in monochrome. All in all, despite shooting with two different units, two different directors and two different cameramen, we managed to create a high-quality, consistent look based on naturalness.

Where did you film the series and how do you use locations in the show?
The series was shot mainly in North Rhine-Westphalia and Hamburg. I particularly enjoy the scenes that are supposed to be set in Austria but which we shot in the Eifel region of North Rhine-Westphalia. Thanks to our location scouts, that worked out great.

How would you describe your role as showrunner?
I wrote the concept for this project three years ago during a family holiday, and on our last day of mixing I ran to the petrol station to buy a bottle of champagne. Basically, I feel responsible for everything and have been involved in everything, but was able to learn a lot from very good people on this project and, above all, we owe this great series to our excellent cast.

What challenges did you face either in development or production?
I don’t want to bore anyone with coronavirus, which of course hit us hard. I think that in general, in the case of many large projects in Germany, we could still work on a more ideal interpretation of teamwork. Fortunately, the time of the silverbacks is over; now we have to quickly and constructively come up with a new construct.

What do you hope viewers take from the series?
I would be happy if more people in Germany were to develop a clear stance vis-à-vis right-wing radicalism. I’m thinking of something like disgust, simply an instinctive disgust towards intolerance and xenophobia.

Why do you think the series might appeal to an international audience?
I could make it easy for myself now and claim that Hitler works as a brand all over the world, but with this approach I find myself in a dilemma. For me as a producer, that would be nice, but personally, of course, I hope that’s not the case. I’d like to answer very naively: this is a series from Germany that tells a very German story on an international level, and I am sure that this series can inspire and entertain people in every country in the world as well. We are very proud that Fremantle is involved.