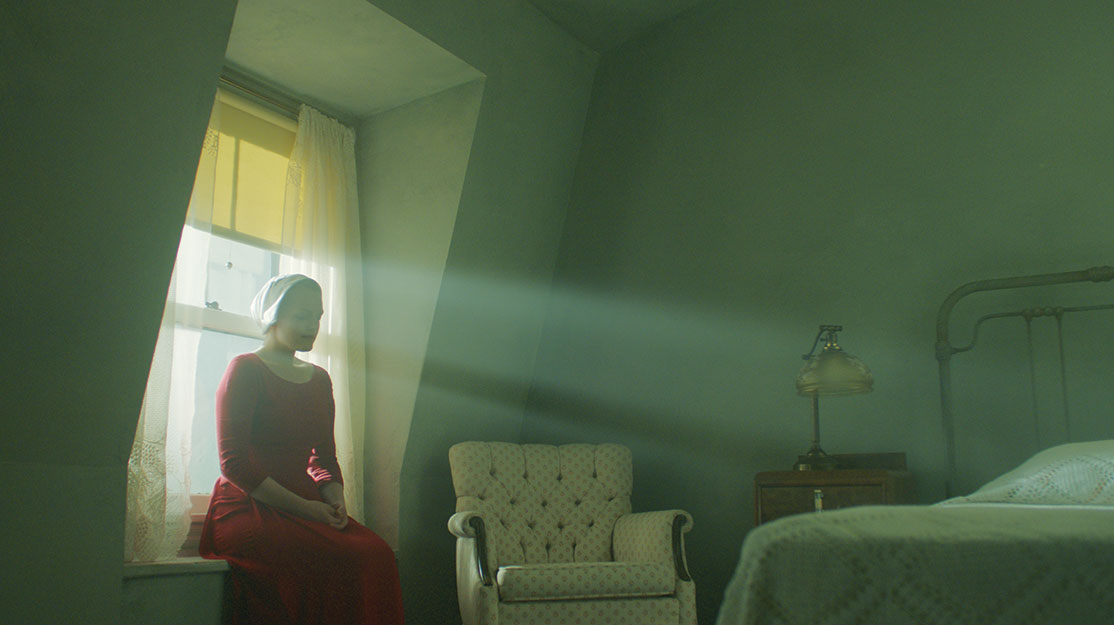 Hulu original series The Handmaid’s Tale brings Margaret Atwood’s eponymous 1985 novel to the small screen – and it could be the most timely and relevant drama of 2017.

When the inauguration of Donald Trump as US president prompted thousands of people across the US – and the world – to join women’s marches in January this year, it was notable that many were reminded of Margaret Atwood’s dystopian novel The Handmaid’s Tale.

Signs reading “Make Margaret Atwood fiction again,” “The Handmaid’s Tale is not an instruction manual” and “No to the Republic of Gilead” all relayed fears that the rise of the political right in Washington could see America become a totalitarian state comparable to that imagined in Atwood’s 1985 novel – which also shot back up the bestseller lists.

The story is set in Gilead, formerly part of the US but now a republic ruled by religious fundamentalists who treat women as property of the state, against a backdrop of environmental disasters and plunging birthrates. The few remaining fertile women are designated as handmaids to the ruling class and forced into a life of sexual servitude in an attempt to boost the falling population.

Offred, the titular handmaid, must navigate between Commanders, their wives, domestic Marthas and her fellow handmaids, where anyone could be a spy for Gilead, and all with one goal – to survive and find the daughter who was taken from her.

Atwood is a consulting producer on the series, which is exec produced by showrunner Bruce Miller alongside Daniel Wilson, Fran Sears and Warren Littlefield. MGM Television produces and distributes.

Miller was writing the pilot script at the time of the US primaries in 2016 and immediately recognised how relevant the story was more than 30 years after it was published. “I don’t think people are worried that America is going to turn into Gilead,” he says of the protest signs. “Really it ties into the fact people feel like their government is beyond their control and the things that are happening are getting scary and there’s nothing they can do about it.

Miller became a fan of Atwood’s novel during his time at college and says the text inspired him to become a writer. He followed the movement of a potential TV adaptation for several years, to the point where he says Ilene Chaiken was writing a series for US premium cable network Showtime. But when Showtime passed and Hulu picked up the baton, Miller stepped in as showrunner while Chaiken focused on her Fox series Empire.

The pitfalls for any writer adapting a “sacred text” such as this may have been off-putting, but Miller’s own love for the story meant he was ideally placed to lead its transition to TV.

“People have paragraphs from this book tattooed on their body!” he says. “This is something people treasure quite a bit, so you have to be mindful of that – but you can’t be a slave to it. Luckily I was one of those people who thought it was a sacred text and I’m thrilled it came out as I had hoped, only better, which is kind of the dream.”

Atwood proved to be a key resource for Miller to lean on, particularly when it came to addressing changes he believed needed to be made for the screen. He says the biggest change was to give Gilead a more diverse population than that in the book, in which the state is strictly a “white world” where people of African-American origin are sent to reservations and Jews are deported to Israel.

“I struggled with that on a few levels,” Miller admits. “That doesn’t look like our world today and I was worried about that. And, honestly, what’s the difference between making a TV show about racists and a racist TV show? I couldn’t get my mind around that.

“We had a long discussion and my thinking was that in Gilead, fertility trumps everything. So whatever level of racism they had would have been subverted for the ultimate goal of having children. That’s why in the first episode, you see handmaids are all different shapes, sizes and colours.”

Another major change was reducing the ages of the Commander and his wife, Serena Joy – the couple who welcome Offred into their home as a handmaid. In the novel they are much older than Offred, but Miller was keen to make them younger to create a new relationship between the female characters. “The dynamic between Serena Joy and Offred is so central that I wanted to make them more direct competitors. What happens to Serena Joy’s identity when this person is in her house and sleeping with her husband? It was a difficult but mindful decision and was made to make sure I had an ongoing, interesting dynamic moving forward.”

In keeping with the novel, The Handmaid’s Tale jumps across multiple timelines, from the present day to Offred’s time at the Red Centre – a handmaid training camp run by ‘Aunts’ – and to a time pre-Gilead, when Offred (then known by her real name, June) is living with her husband Luke and their young daughter.

But the biggest challenge Miller faced during filming in Toronto was maintaining an attention to detail that would shame most period dramas. “I’m very detail-oriented and I don’t want anything to bug me while I’m watching because it knocks me out of the world. But this show was a whole other level of attention to detail,” he says. “If you see a Mercedes car, are we saying Gilead has trade relations with Germany? So what does Germany think about that? Or are we a pariah nation?

“All of a sudden, just by showing someone polishing a car, you’re opening up a political, global trade discussion about human rights. So you really have to pay attention to that on a comical scale.”

Miller also praises lead director Reed Morano, who was behind the camera for the first three episodes, as an “extraordinary talent” who worked tirelessly in pre-production to iron out exactly how she wanted to bring Gilead to life.

Morano was also a fan of the novel – “I’ve always been fascinated by stories of alternate realities, it just creeps me out a lot,” she admits – and won over Hulu and MGM with her sheer passion for the source material. “I read the pilot very early on and, although it has two storytelling devices that are typically red flags to me in flashbacks and voiceover, it’s a testament to Bruce’s writing, to Margaret Atwood and Ilene Chaiken that not only was I not deterred by it, I was inspired by the challenge of subverting expectations with devices that have been used so many times before.”

Stylistically, Morano used a combination of classic camera techniques to capture Gilead, mixing a symmetrical, composed design with a romantic, impressionistic look. She also opted for handheld coverage for Offred and Ofglen to give viewers a more intimate relationship with the handmaids.

Her episodes are also full of directorial flourishes, from overhead shots to slow-motion sequences and even the soundtrack, which uses songs such as Simple Minds’ Don’t You Forget About Me and Blondie’s Heart of Glass to maximum effect.

For the flashbacks, Morano was keen to create a contrast between Gilead and pre-Gilead. “I often wanted the flashbacks to be jarring, almost offensive,” she says. “Gilead is so sanitised, reserved and controlled. Then you get thrust into a messy, impressionistic flashback where Moira and June are listening to a loud, graphic song and smoking a joint at a party. If they only saw life in Gilead, it might be easier for the audience to separate themselves from it. But because we’re constantly reminding the audience what life was like before, which is what life is like right now [in reality], it makes the story more emotional and makes it feel like a much more accessible world.”

Colour was also a key consideration for Morano, working in partnership with director of photography Colin Watkinson, costume designer Ane Crabtree and production designer Julie Berghoff. Shades of red were picked out for the handmaids, blue for the wives and green for the domestic servants, known as Marthas. The striking appearance of the show was taken further with the production design, with one notable example being that Serena Joy’s room is nearly the same colour as her clothing, creating a look the director describes as “super weird.”

On set, Morano had hours of conversations with Fiennes and Strahovski about their characters, who have their own sets of problems in Gilead. “At the end of one scene in episode two, you briefly see the Commander in his office by himself and I just thought, ‘Man, it is lonely in Gilead for everyone,’” she says. “Everyone would expect Serena Joy to be the villain but she has all sides to her, which is what makes her so dynamic and her character so unexpected. There is a vulnerability to her that I always saw potential in revealing.”

However, it is star Moss who Morano describes as her “partner in crime.” When not on set together, the pair would constantly exchange messages about the next day’s shoot. “It was a luxury having such an intuitive partner in Lizzie, by my side every day, so we could challenge each other and brainstorm on how to take every scene to the next level,” Morano explains. “Not only being the lead but also a producer, she’s more invested than anybody. The level of dedication she’s put into this series is insane.”

Morano is now prepping her next movie, post-apocalyptic I Think We’re Alone Now, but says The Handmaid’s Tale also feels like a film because her level of involvement, from pre-production to the edit, meant she had a hand on her episodes at every level.

“Film and TV have very different processes but, in my experience, this was the closest it’s been creatively to being on a film,” she adds. “I got lucky enough to be there at the beginning and to be the one to come in and imagine the way the story is told and to create the visual language of the world. In TV, you don’t often get the opportunity to truly put yourself into a project, to put your stamp on it, so I was really grateful for the chance to do that.”