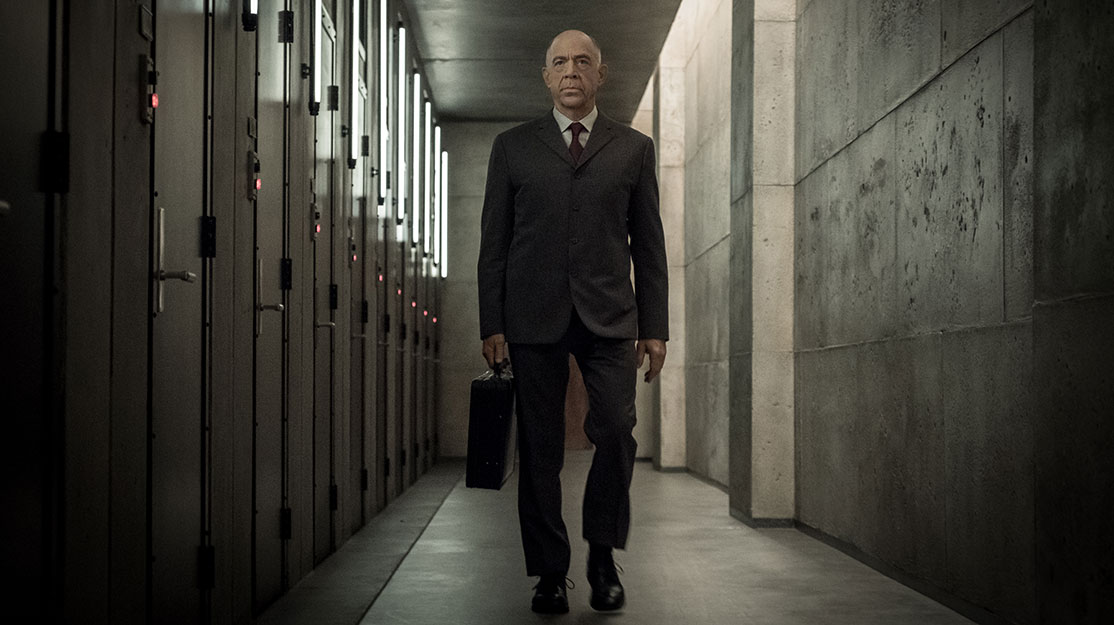 JK Simmons goes head to head with himself in spy drama Counterpart, launching on Starz this month. The actor, co-star Olivia Williams and creator Justin Marks talk about making the series, which blends sci-fi and espionage to create a high-octane thriller.

Few would dare cross some of the characters Hollywood actor JK Simmons has played in the past. There was the unforgiving restaurant boss in last year’s La La Land, cigar-smoking newspaper editor J Jonah Jameson in Sam Raimi’s Spider-Man trilogy and ruthless music teacher Terence Fletcher in Whiplash, for which he won an Oscar in 2014.

In Starz’s upcoming spy-drama Counterpart, however, he goes up against himself as two worlds collide in Cold War Berlin. The actor leads a cast including Olivia Williams (The Sixth Sense) and Harry Lloyd (Game of Thrones, The Theory of Everything) as Howard Silk, a long-serving cog in the bureaucratic machinery of a Berlin-based United Nations spy agency.

When Howard discovers his organisation safeguards the secret of a crossing into a parallel dimension, he is thrust into a shadow world of intrigue, danger and double-crosses, where the only man he can trust is his near-identical counterpart from the parallel world.

“It’s a show with two universes; so much of our cast play two roles and some more surprisingly than others,” explains creator and writer Justin Marks (The Jungle Book). “We take from the tropes of the espionage genre, that classic British world, and apply it to this high-concept science fiction, almost metaphysical or existential, premise.”

Marks came up with the idea for the show while pondering his own background and what might have been had he not pursued a career in screenwriting. Starz has taken the unusual step of committing to two 10-episode seasons of the show, which was ordered straight-to-series and is being distributed by Sony Pictures Entertainment. Season one debuts in the US on January 21.

Simmons, who also executive produces the project, tells DQ that playing two versions of his character was a welcome challenge. “Like a lot of high-end television now, it’s kind of a hybrid between traditional TV- and movie-making,” he says. “It’s great to have new challenges, especially having been around for a while. It’s an ideal combination of knowing you have a complicated and layered character in a complicated and layered story, but not really knowing where it’s all going to end.”

Produced by Los Angeles-based Anonymous Content and Gilbert Films, with Fireglory Pictures in Berlin, Marks reveals that the fact Starz ordered two seasons up front allowed him and his team more freedom in terms of planning out the overall story arc. He’s hopeful the show will continue beyond the first 20 episodes, of course, for more of the same. “We’ve been able to really slow-burn our story and make it much bigger, so much so that some of the characters aren’t even revealed in the first episode,” he explains.

One of those who isn’t immediately introduced is Howard’s wife Emily Silk, played by English actor Williams. Despite not having any lines in the first script, what she read of it was enough to win her over for the duration. “I had absolutely nothing to do in the first episode,” she says, “but I thought the writing for all the other actors was incredible and hoped whoever was writing for them would be writing for me. It held the promise of infinite interest.”

Having appeared in countless US TV procedurals in addition to his Hollywood blockbuster roles, Simmons believes Counterpart’s storyline offers endless possibilities. Speaking while dressed from head to toe in black, Simmons’ outfit is perfect for a man lodged between two existences in search of his true identity. “The big difference is obviously, with a feature film, you know where you’re going with a beginning, middle and end. With Counterpart, all possibilities are open, and in this case times two,” the actor muses.

“Justin and I talked about the overall arc of where the first 10 episodes were going and I had a slight sense of a beginning, middle and end, but you’re really only getting one episode at a time, as opposed to a lot of US shows I’ve done where only the names of the bad guy might change each week. The infinite possibilities of it branching out keep it interesting.”

While Simmons is something of a TV veteran, Marks takes to the medium for the first time with Counterpart. So why the transition? “The choice to move into television comes down to the opportunity to tell a story and the chance to work with great actors who want to do longform,” he explains. “It’s been really different to the feature-writing experience where you’re a little more of a mercenary – you’re coming in and out of films and committing what you can. In this case, the show really is a piece of me and an exploration of a lot of ideas that have been in my head for a long time.”

Morten Tyldum (The Imitation Game) helmed the first episode of Counterpart’s upcoming first season before a rotating stable of three other directors took on three episodes each. Filming took place in LA and Berlin’s Tempelhof Airport, and Marks reveals that shooting in Germany felt so authentic that he’ll be doubling the amount of time spent in the city for season two.

“There are plenty of cliffhangers; every episode expands our world a little further,” he says. “We’re talking about two universes that were once identical and are now peeling off and becoming more competitive with one another.”

Williams adds: “On each side of the universe, the characters have exponentially made billions of slightly different choices” – and now it’s up to them to deal with the outcomes.

Despite Counterpart being a sci-fi series, the creative team were keen to ensure the tech and special effects side of things didn’t get in the way of characters and story. The portal bridging both worlds appears simply as a doorway for that reason.

“You could apply a lot of theories to what may or may not be happening in the show,” Marks says. “In the end, what we’re really competing against as a culture is other versions of ourselves who share the same ambitions, hopes and regrets, and there’s a tragedy to that.”

It’s a story of both hope and regret, concludes Simmons – and seeing him scale the depths of his two characters this winter is sure to make for unmissable viewing.