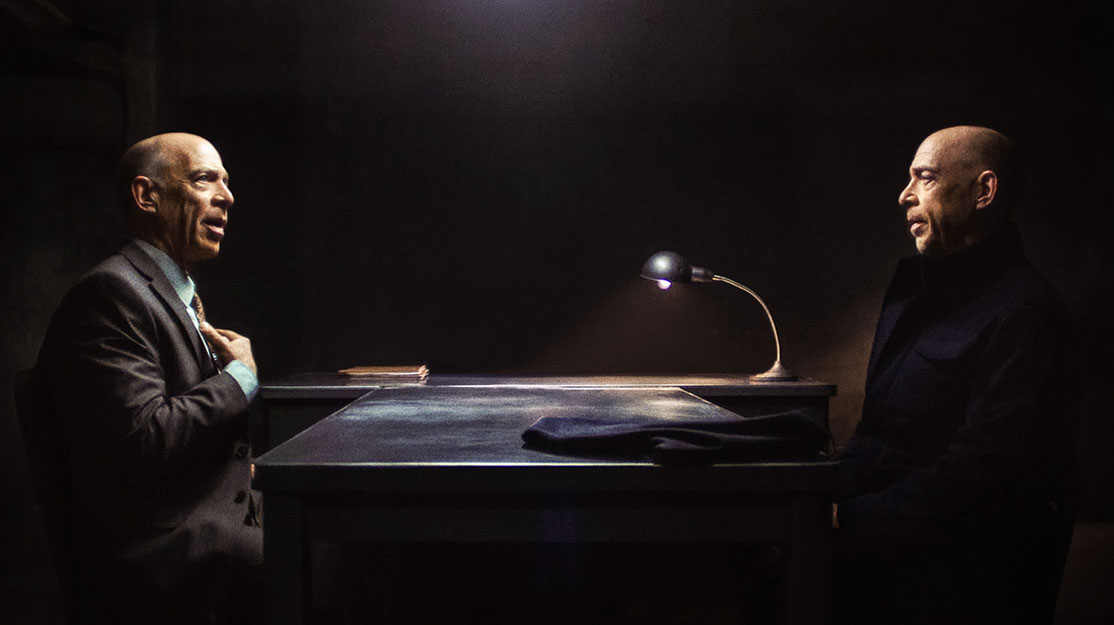 Counterpart creator Justin Marks picks out a key scene from the Starz spy drama’s opening episode that sets the tone for the rest of the show, which is currently in production on its second season.

Counterpart always came from this desire to do a show steeped in the feeling of the great Cold War spy thrillers that I grew up with. Whether that was Graham Green or John le Carré, the kind of spy thrillers that rely on mysterious meetings on park benches and people speaking in code; spies living these very fractured lives where it’s less about how they carry on as a spy than how they betray people who they really form close friendships with.

But I knew I didn’t want to do a story that was just a Cold War thriller. I feel like we’ve seen them. As someone who comes from science fiction, I wanted to find a way to sprinkle a little sci-fi on the top. The idea was to do a Berlin Wall thriller where the wall was more of a metaphysical construct – a divide between two worlds, two realities that were once identical but have since split off in both small and large ways.

On one level, Howard Silk (played by JK Simmons) is a meek and humble cog in the wheel of a very large bureaucratic enterprise, with shadings of those in movies like Brazil or Metropolis, who then learns that not only is there another side of himself, but this other side has grown quite differently over the last few decades. However, both of these men, while appearing to be different, actually share quite a lot. That’s what became most interesting for us as writers. It was not about how different we could make these two versions but how different they could be while still maintaining the same moral compass, the same flaws that have just manifested in different ways. At its heart, that’s what Counterpart is about.

A very important moment in the show’s first episode is when Howard and his counterpart, who we call Howard Prime, from the other world, first get a chance to be alone together. In his apartment, after all the spy tradecraft has been talked about, they’re really just killing time.

We’re very proud of our action sequences and the intricacies of our plot. We worked hard to make it work and make it make sense. But the reason we worked so hard was so we could get it out of the way and let this show ultimately be about giving opportunities for two versions of the same self to sit in the same room and sniff each other’s asses for some period of time, get to know each other and study the similarities and differences between them.

One of the things that I find so interesting about the concept of Counterpart is that we all possess our own secrets and memories and our own ways of seeing things. How both relieving and also terrifying it must be to find there’s someone else who knows all those secrets and memories. So how do you keep secrets from someone who knows all of your secrets, in a world that’s all about secrets?

What starts to happen in that scene is Howard and Howard Prime start to explore each other. They start to talk about a bully their brother-in-law reminded them of, and we see by the way they talk about him that they had the same memory. But – and this is key to the philosophy of the show – I don’t believe memories exist in isolation. We treat memories as things that are being approached from the present. So we impose upon our memories the needs of our present, which means Howard Prime is going to extract from a memory a very different lesson to the one the main Howard will.

Howard is a nice guy and has been run over throughout his whole life, and sees the bullying experience as another obstacle in the road to be endured, while Howard Prime simply sees the bully as ‘that asshole.’ That’s where you start to see the cracks between them. Everything about this show is laid out in that scene. The things they share and the slight differences that are going to get so much bigger over time, and yet they’re always going to have this rubber band that brings them back to the same centre.

It also presented for us and JK Simmons an incredible challenge in how to execute it and how to make it feel human and really portray it to an audience. These are two versions of the same self sitting there, but they feel like two completely different people when JK inhabits those bodies. The hope when you watch the show is you really do let go of, ‘How did they do it?’ and you just see it as there must be two JKs out there, doing two things; you stop wondering about the magic trick and start letting go. It’s about being able to explore another side of yourself. It’s not about the magic trick of putting one actor on screen with himself.

JK is a very inside-out kind of actor. We work hard to construct elaborate and detailed biographies for our characters on this show, and he was given access to all this information. He knew what made one version of one self different from the other, which is a key story that has not really been fully revealed yet. Certainly when you’re dropped into the world in the first episode, you don’t really have that specific answer of what made him like this and the other one like that. But JK knew the answer, so he was able to build his performance with that in his head.

What he does – and it’s really amazing to see it happen – is he can show up on set and, just by the way he’s holding his body, you know exactly who he’s playing. In the case of Howard, he slumps his shoulders and has a slower gait and a more defeated feeling. In the case of Howard Prime, it’s in the eyes. He looks around the world like a predator looking for his next prey, spotting the weakness of the person he’s in the scene with, whereas Howard recognises weakness but forgives it. When they’re interacting with each other, you see that starting to happen.

If I had it my way, JK and JK would be in every scene together. It’s just I wouldn’t survive and nor would the entire production, given the sheer obstacles to producing scenes like that. It takes a lot of time – you have multiple split screens set up, you have your strategy for how you’re shooting a scene and how you’re going to shoot two versions of the same person together. It’s a very difficult thing, made easier by having great actors, but it’s a time-consuming process.

This scene with two JKs took almost two days to film. On a television schedule, that is a nightmare. You cannot shoot an episode where one scene takes two days. So we pick and choose our moments, and we want them to grow separately and observe things so they can eventually come back together and share what they’ve learned – and they do in some very big ways.

Counterpart is produced by Gilbert Films, Anonymous Content and MRC and distributed by Sony Pictures Television. The series launches in the UK on StarzPlay on September 28.