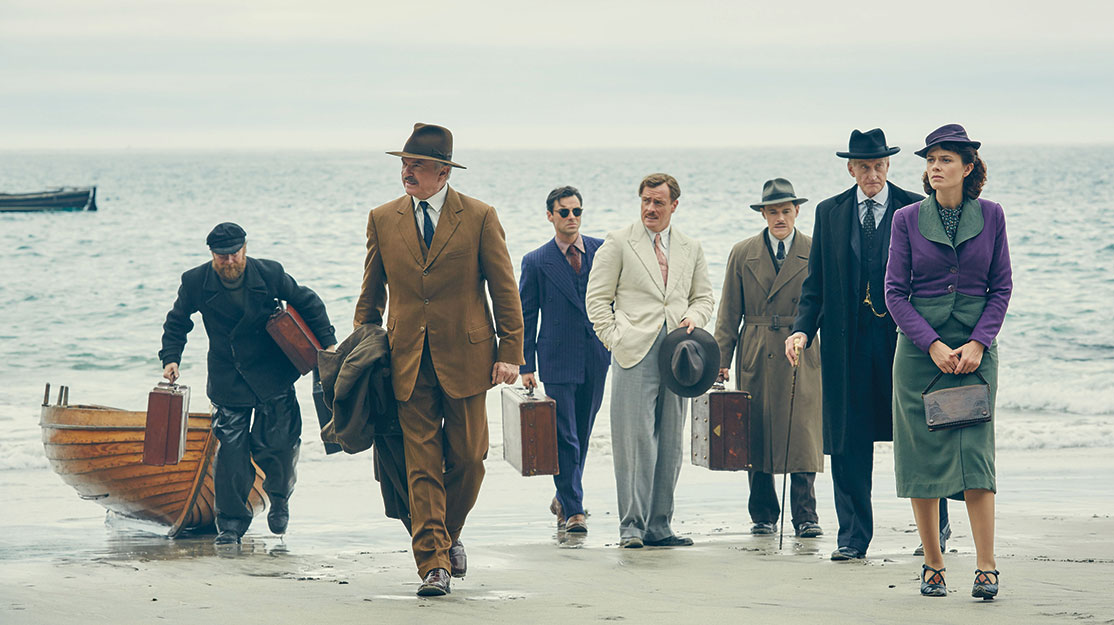 Second to None: DQ on the darkest Agatha Christie adaptation yet

And Then There Were None is Agatha Christie’s seminal murder mystery – but just how was this story of 10 strangers stranded on an isolated island brought to the screen?

It was first published in 1939 as the world stood on the brink of war, but Agatha Christie’s And Then There Were None (ATTWN) remains the celebrated author’s most popular work.

More than 70 years after it was written, the chilling murder mystery is still the best-selling crime story of all time and was recently voted Christie’s most popular novel.

And now it’s been given the television treatment after BBC1 and US cable network Lifetime partnered to bring it to the small screen – but just how did Agatha Christie Ltd (ACL), producer Mammoth Screen and writer Sarah Phelps adapt the story?

And Then There Were None sees 10 strangers brought together on a mysterious island, but as they wait for their hosts, they find themselves cut off from civilisation. The guests then start to die, one by one, according to the rules of Ten Little Soldier Boys, a nursery rhyme that ends with the words: “… and then there were none.”

Best known for her “cosy crime” stories featuring Miss Marple and Poirot, it was time for people to see the other side of Agatha Christie, says Hilary Strong, CEO of ACL. “And Then There Were None is probably Christie’s seminal book,” she says. “Sarah did an amazing adaptation but the book itself is very dark and brutal. We haven’t changed the tone of it. That’s how she wrote it.”

Mammoth’s executive producers Karen Thrussell and Damien Timmer have a long history with Christie, having previously produced Poirot for ITV. Thrussell says that with no detective at the centre of the plot, ATTWN immediately stands out as “amazingly different and inventive.”

She adds: “It’s a dark, dark book – the original slasher thriller – but it’s also very psychological. It was absolutely the one we most wanted to do. So we got in touch with Sarah, who’s one of our favourite writers. I don’t think she’d actually read Agatha Christie before and I think she was knocked over sideways actually reading this book because it’s not what you expect from Christie.”

Phelps describes the story as “remorseless. You thought you knew what this woman (Christie) was about,” she says. “Her mind was absolutely extraordinary. You kind of forget that. Agatha the writer and Agatha the brain get lost in Agatha the brand. I was profoundly shocked by it in a really exciting way. That’s what I really hope comes across. It’s brutal.”

When writing the book, Christie worked backwards, starting at the end when everyone is dead and the police arrive too late, penning it over two years. Phelps similarly approached the adaptation as a puzzle, trying to make sure all the characters’ whereabouts were known when another person died and yet ensuring that each remained a suspect.

“You have to build it inside your head and let the characters walk around it,” she says. “I took the dog on really long walks and stamped around to get the atmosphere of it and then I sat down and threw everything I had at it and hoped for the best. You can find yourself thinking, ‘Well, in the book you know this person’s there because you’re told.’

“When you put it in a three-dimensional setting, you need to make sure that when a murder happens, viewers know where everybody is and yet they could all legitimately be the murderer of the person that’s just died. You can bash your head against the walls a couple of times thinking about how to solve that. But that’s part of the fun. And if you can make those reasons characterful, then it’s dramatic.”

The reveal in the original text was also saved for two epilogues at the end of the story, meaning Phelps also had to find a way for the story to be resolved on screen – one of several changes she made to Christie’s novel.

“The two epilogues tell you everything that happened after the event and how it was all planned, giving insight into the process of doing it. But you don’t want to finish your drama and have a couple of epilogues, so you want to pull that into the structure of the drama itself,” she says.

“There are little things we changed slightly to facilitate bringing that stuff into the body of the drama. I changed one of the crimes just because I wanted the character to have a much closer connection to it; I wanted to actively make him a murder victim rather than somebody who did something and then death just happened. I wanted them to be active agents in the destruction of another life.”

Craig Viveiros was brought in to direct the series, while production designer Sophie Becher was often found trawling antique shops and junk markets to find props that were authentic to its 1939 setting.

“Sophie very much wanted to keep the style as Sarah had written, with the house on the island very white and modern,” Thrussell says. “There’s a theme of deterioration as the show goes on because you start with a slightly more optimistic lighting set-up, the characters get to the house and it’s rather nice and the food’s excellent.

“Then gradually as it descends into chaos, it gets darker and their appearance becomes dishevelled and not so neat. There’s that progression that’s been carefully tracked throughout. We also did that that with the music – it got more experimental as we went through. It was a bit of a journey.”

Having aired in three-parts on BBC1 over Christmas, ATTWN will also appear as two 90-minute instalments on Lifetime in the US in spring.

Joel Denton, MD of international content sales and partnerships at Lifetime parent A+E Networks, says joining forces with the BBC for the miniseries was a “no-brainer.”

“For Lifetime, it doesn’t get much better,” he says. “Sarah’s retelling of a book we all think we know but actually don’t quite know is extraordinary. For us, looking at a piece like this as an event and Agatha Christie as a brand, along with the great cast and two great storytellers, it was a no-brainer.

“We’re excited to be able to use the brand, which still means a lot in the States. Rob Sharenow (Lifetime’s executive VP of programming), who bought the show very early on before he’d seen anything from Sarah, knew the book well. He’d read the book as a child, loved it and they just needed some hooks – which are the cast as well as Agatha – to be able to market it to the audience in the US.”

Strong says the show was always conceived as a coproduction in order to bring together the high-profile cast they wanted from the outset.

“It was never going to be a cheap thing to do so we started talking to America very early on in the process, even before Sarah had written the script,” she explains. “Working with Joel at A+E and Lifetime was a revelation because, at the same time as we were trying to ensure the world saw a different side to Agatha Christie’s work, Lifetime was also trying to move away from its very female audience, so it was a real brand match in terms of what we were trying to do.

“This is a BBC show written by Agatha Christie – it’s very inherently British. A+E and Lifetime needed a cast that resonated with their audience so we got them an extraordinary cast. Charles Dance, Aidan Turner looking very different to Poldark, Sam Neil, Burn Gorman – it’s just a fantastic team of people and they worked so well together. They loved it.”

With the story literally coming to a dead end, there’s no chance of a second season – so why was this adapted for television and not made into a movie?

“What I love about TV is you have time to explore things,” Thrussell says. “One of the things Sarah did beautifully was to really get to know these people and I don’t think you could do that in a two-hour film. What’s brilliant about TV is that you can explore the longevity of things. I don’t know how you’d do it justice as a film. TV is great for character development, that’s what makes it interesting.”

With a big-screen remake of Murder on the Orient Express, directed by and starring Kenneth Branagh, due in November 2017, ACL is continuing to find ways to bring Christie to new and younger audiences.

“We would love to make more TV in the future but we will do it very carefully and very sparingly,” Strong adds. “We don’t want to have a thousand Christies in production. But I’d love to adapt Witness for the Prosecution next.”