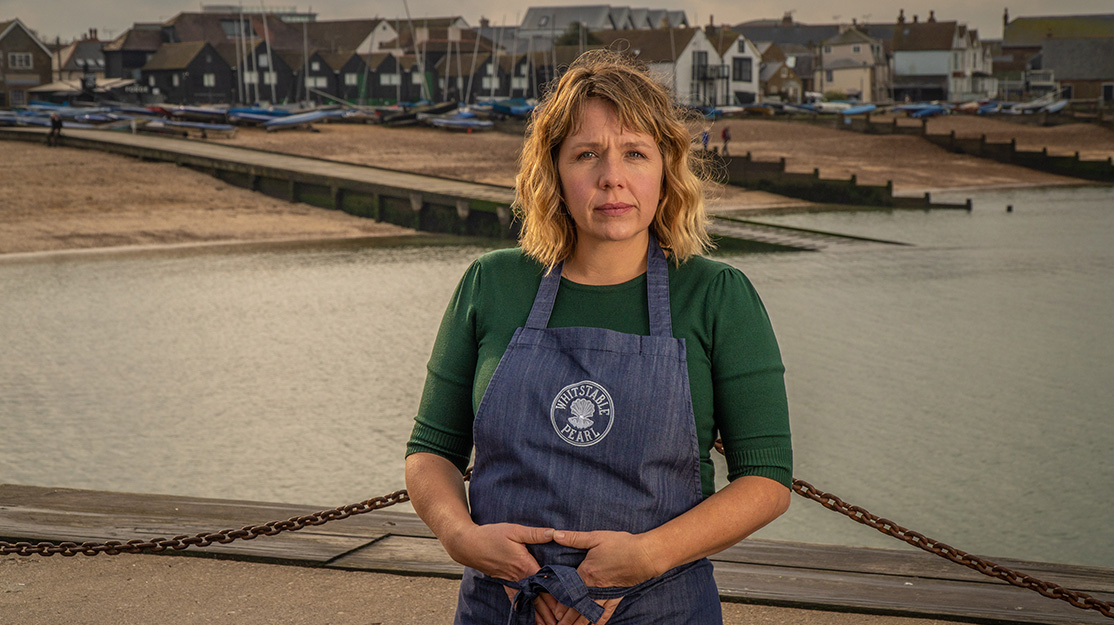 Since 2015, the English seaside town of Whitstable has served as the backdrop for a string of murder mysteries written by Julie Wassmer. Now the author’s Whitstable Pearl novels, and the town, are getting the television treatment in an adaptation that brings a flavour of Scandi noir to the Kent coastline.

Created by Norwegian filmmaker Øystein Karlsen (Dag, Exit), six-part series Whitstable Pearl stars Afterlife’s Kerry Godliman as Pearl Nolan, the owner of the titular restaurant and a newly formed detective agency. When she discovers a family friend dead in the opening episode, she takes it upon herself to investigate what she believes to be murder.

But standing in her way is DCI Mike McGuire (Howard Charles), a new police chief who has transferred from London in a bid to escape his past. Although they clash at first, Mike is soon the only other person to share Pearl’s theory. Then, when a second body is discovered, she finds herself pulled into the picturesque town’s seedy underbelly.

With a new crime to solve in each episode, the series also follows the relationship between Pearl and Mike – a DFL or ‘Down from Londoner’ as Wassmer describes him – and the growing warmth between the pair as he begins to use Pearl’s detective skills.

“I presented Pearl to the world as a woman on the brink of 40 who had given up on her ambition to become a high-ranking police detective,” the author tells DQ. “She’s very much a people person and she has a great instinct for people. She also has high status in the town. But when she was young and she embarked upon her police training, an unplanned pregnancy came in the way and she gave up on that career to bring up her son.

“In the series, she has dedicated herself to the Whitstable Pearl restaurant for 20 years, but now her son is about to go to university so she’s on the brink of empty-nest syndrome. It’s at that point she revisits her old ambition by starting up a detective agency. On the eve of Whitstable Oyster Festival, a family friend is discovered dead and it’s Pearl’s task to discover whether or not it was murder, suicide or an accident.”

“Pearl’s fantastic because she is smart, intuitive and emotionally incredibly sensitive, but she’s also totally selfless – and that selflessness is partly due to the fact that she’s got a big heart,” says executive producer Tony Wood, CEO of producer Buccaneer Media. “But much more interestingly, it’s because she’s scared of being hurt. There’s a proper vulnerability and there’s a fault line in the character that means she’s just quick to protect herself.”

After making three seasons of Marcella, in which Buccaneer partnered with The Bridge creator Hans Rosenfeldt, Whitstable Pearl similarly marries British and Scandi drama by bringing in Karlsen to adapt Wassmer’s murder mysteries.

“When it came to this, it seemed natural for us to go back to Scandinavia,” Wood says. “Øystein and I had worked on a couple of things in development that never got away, but he’s a phenomenon. He said to me very early on, ‘You do know I’ve never done a pre-watershed show’ – and you can tell. But he brought realism to the emotional portrayal of the characters and the way they are confronted by decisions. There are some episodes that are much more comic than others and some that are really very dark indeed, but maybe that’s just life.”

As creator and lead writer, Karlsen wrote a story arc for the series as well as scripts for episode one, based on the first novel The Whitstable Pearl Mystery, and episode four, which is adapted from the fifth book in the series, Disappearance at Oare. The four other episodes all feature original stories from a writing team that includes Mike Walden (Marcella), Rachel Flowerday (Father Brown) and Alastair Galbraith (Doc Martin).

The Acorn TV series, which is distributed by Cineflix Rights, had been in the works at Buccaneer for a couple of years before Karlsen came on board, with the writer keen to showcase the town and the characters Wassmer had developed in her novels.

“The first thing about adaptation is just finding what it is that I find most interesting, but at the same time you have to stay true to the story because you don’t want a piss the readers off,” Karlsen says. “What I added to that murder mystery is a bit of darkness to the characters and a fair amount of dark humour.” But the most interesting aspect of the series, he says, apart from the whodunnit storylines, is the romantic chemistry between Mike and Pearl.

“It’s fun to write a love story about people at that age,” he continues. “When you are 23 and in love, you don’t know quite as well the consequences of what you’re getting into beforehand. But when you’re like 40 or 45, you have your guard up because you know how much it hurts if it doesn’t work out. They’re both people who have been scarred by life and are learning to trust and open up again.

“The other thing Whitstable has going for it is that stark contrast between the picturesque city and the environment and what’s going on in the story. It’s a little bit like Wallander in [Swedish town] Ystad. There’s a hell of a lot of murders going on and the contrast is fascinating. You have the ocean and the wind, combined with that cute little high street. It makes it visually a place that you want to visit.”

Writing the opening episode involved Karlsen setting the tone of the show, introducing the main characters and the show’s setting, as well as distilling a 350-page novel into a 46-minute running time, which meant events had to move quickly without feeling rushed.

“What I tried to do was combine the essence of what you needed to know and a story that would still have a cliffhanger after the first episode,” the writer says. “Then we took all the main parts that were in the first book and the second book [Murder-on-Sea] and spread that out through the rest of the six episodes as a story arc. You have both a whodunnit that has an ending in each episode, you have a story arc that has a longer span from the first to the end of the season and at the same time, you have there relationship between the two main characters that slowly evolves in each episode.”

Godliman was “dream casting” for the role of Pearl, admits Wood, who says the range in her performance means viewers won’t know what the character will do next.

“There’s such high quality to everything she does and that versatility means you’ve got a character who’s constantly dynamic,” he notes. “There is such a communication of emotion and warmth from her. She is able to create characters that epitomise the way an audience empathises with a character in a particular situation.”

Before Wassmer started writing the Whitstable Pearl novels – she is a DFL herself after moving to Whitstable 21 years ago – she was a television writer on shows such as EastEnders, London’s Burning and Family Affairs. She was originally only given a three-book deal but such has been their success that book eight is now due to be published next month.

Working as an executive producer on the adaptation of her novels, she met lead director David Caffrey and production designer Ashleigh Jeffers before filming started to discuss how the show might be filmed in the town. Notably, most of the novels are set in summer, whereas the series was shot last autumn.

“You would expect these coastal town seaside murder mysteries might always be depicted as a summer series, like Doc Martin with murder,” she says. “But the whole sense of Whitstable captured on film at that time really worked with the more Scandi noir, edgy feel of Øystein’s script. Whitstable is playing a major part in this series, almost as another character. The locations were fantastic. One reason I’d never fictionalise the settings in my books is because I really wanted to pay tribute to the town I’d fallen in love with at first sight. I’d always wanted to place Whitstable as a central character in the book, and that’s really translated to the screen in this series, which is just incredibly telegenic.”

Filming began in October last year and was completed in January, a time period that saw the production navigate the various demands of numerous local and national lockdowns as the UK continued its fight against Covid-19 – and the quickly spreading Kent variant of the virus.

“Psychologically it was difficult,” says Wood. “We had to deal with lots of location changes, there were accommodation changes for everybody. Obviously there were script changes because there was some places we were going to film that would probably have been deemed Covid-insecure and in lockdown we just couldn’t do that.”

Despite largely filming on location, building the interior of Pearl’s restaurant at the Kent County Showground meant it could become a controlled environment. This led to the decision to shift several other scenes to the same set, meaning a second full week of shooting there was added to the schedule

“A lot of that stuff was literally being written overnight, but you had to do it,” Wood notes. “It was all about safety. The other locations we were going to, we ended up with replacements for most of those, as it turned out those particular episodes involved some fairly small domestic interiors, in which you can’t social distance in any way.”

Covid aside, Wood says the challenge of the series was to balance episodic satisfaction with the emotional arc of the central characters that plays out across all six episodes.

“That balance was really difficult because you simply don’t have the time for that, and so you end up with lots of moments that are doing two or three things simultaneously in terms of how it pulls and influences an audience,” he says. “The writing of the show was also not as straightforward as I had imagined it would be from things I’ve done in the past. Moving forward, we’ve got enough series regulars to be able to play with their emotional arc in each season.”

Karlsen hopes viewers will enjoy spending time with Pearl and Mike and enjoy playing detective as the murder mysteries come under the microscope in each episode when the series launches on streamer Acorn TV in North America, the UK, Australia and New Zealand on Monday.

“But the main thing is I feel like this is a place that you want to go to, to forget about your own life,” he says. “What you need to have is enough warmth, enough humour and enough excitement to forget about real life for a while. That’s the only reason that we watch drama, and hopefully we’ve created that.”

Meanwhile, Wassmer already has plans for the ninth Whitstable Pearl book and is facing the dilemma of now imagining Godliman and Charles when she plots out the story.

“When you’re writing a character into a book, you give them certain physical attributes and one thing I’ve tried to do in the book is to show a very obvious physical difference between Pearl and Maguire,” she says. “You do that to enforce the contrast between them and the fact that they are so different and yet those these opposites attract. Now it’s going to be very difficult for me to think about Pearl Nolan resembling anybody else other than Kerry.”