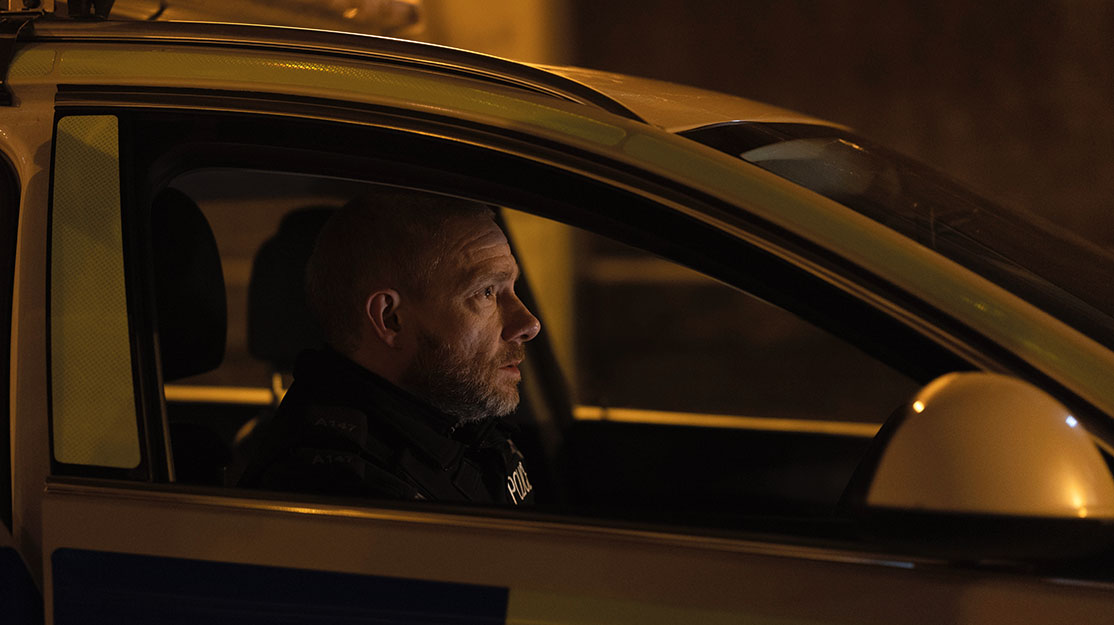 Former police officer Tony Schumacher reveals how an early scene in his five-part series The Responder sets out to challenge viewers’ expectations of this Liverpool-set crime drama.

“People think the series is about drugs, and it’s not. It’s about people,” says writer Tony Schumacher about his BBC drama The Responder. “When I worked with [Time writer] Jimmy McGovern really early on, Jimmy was all about, ‘Don’t let them make you put too much plot in. This is about people.’ So for me, The Responder is not a police show. It’s not a drugs show. It’s a people show with drugs in it.”

The five-part drama – ex-police officer Schumacher’s first original TV series – seeks to reflect the extreme emotional pressures facing those on the front line of British policing with a story that is funny, tragic and challenging. Produced by Dancing Ledge Productions, it was recently renewed for a second season by BBC One.

Sherlock star Martin Freeman (pictured top) plays Chris Carson, a crisis-stricken, morally compromised, unconventional urgent-response officer tackling a series of night shifts on the beat in Liverpool. While trying to keep his head above water both personally and professionally, Chris is forced to take on a new rookie partner Rachel (Adelayo Adedayo) and they soon discover that survival in this high-pressure, relentless, nighttime world will depend on them either helping or destroying each other.

“When we first meet Chris, he’s on the edge of a cliff. He knows he’s been edging towards it but he never thought he’d go over it. Chris doesn’t even realise he’s fallen until he’s hit the bottom,” the writer says. “Up until that point, he’s felt like a juggler, keeping balls in the air. Then all of a sudden, one ball’s gone and that’s it, everything falls down and he lacks any reserves of mental health to help him get through that period.”

From the start of episode one, it quickly becomes clear that Chris is an unorthodox copper, prowling Liverpool’s darkened streets like a lone wolf and holding seemingly unhealthy, personal relationships with many of the people he confronts during a night shift. One such character is teenager Marco, who shares an early scene with Chris in the back of his police car.

“Very early on, probably only a day into working on the script, I realised I might have something special,” Schumacher says of the scene. “When I’m writing, I look for the magic. I look for the moment when I go, ‘This is it.’ If I can’t find it, I have to keep going back and back until I find it – and if I never find it, I throw my script away. I realised in the first draft, in probably the second day of writing, that I had something special there and then. It meant a lot to me, that scene.

“When we were talking about making the show, I found it was also a scene that meant a lot to other people. I don’t know why. That’s the magic, I suppose. It resonated because it introduced these two really complicated people. When I started writing that scene, Marco was just going to come and go. He was just a guy Chris was going to pump for information and move on from. But another rule I have is if a character has more than two lines of dialogue, I have to create a backstory for them.

“I realised immediately with Marco that I had someone special, and we were so lucky getting Josh Finan [to play him]. Bringing those two actors together and with the chemistry and the magic between them, this felt like such an important scene because it sets everything out.”

The scene begins when Marco is picked up by Chris, and the officer asks whether he’s dealing drugs (see script extracts overleaf). A shared history is quickly established. “You trying to be a detective again, lad?” Marco says, a nod to Chris’s recent demotion, before admitting he has been earning money from ‘Snide Nige’ by “sitting on some gear” for him. “Nothing heavy. Trackies and that. Good copies, though. Hey! I can get you one if you want? Nice tracky and trabs? [tracksuit and trainers] Smarten you up dead cheap, lad!”

When Chris pushes back, he is accused of talking to Marco “like you’re me dad,” before Marco prods him further. “You are rude to everyone out here. We all hate you.”

“Despite that line, you can see there’s just genuine affection. But for me, the most important thing of all is that it was me sitting in the back of that car when I was a kid and it was me sitting in the front of the car as an adult,” Schumacher says. “I’ve been those two people in that car, and that’s why I think the magic was there. I was having a conversation between 18-year-old me and 45-year-old me.”

Thanks to Marco’s use of Scouse slang, the conversation also marks the moment in the series where the show’s Merseyside setting becomes more than just the backdrop to story.

“We got a lot of stick about the vernacular, Marco’s lexicon of slang and Scouse, and I don’t care,” says Schumacher, who hails from the region himself. “That’s how Marco talks. Up until then, that show could have been set in Fulham or Felixstowe, anywhere, but the minute Marco opens his mouth, it’s a six-inch nail right through the script that goes, ‘Bang, we’re in Liverpool here and I’m not making any concessions. If you don’t want to watch it, don’t watch it.’

“I thought I’d get more stick about it, but people have got to know it. People who care about the characters have bothered to learn the language.”

Having worked first as a taxi driver and then as a police officer in Liverpool, Schumacher has spent much of his life sharing conversations like that between Chris and Marco. “That was what was important to me,” he says. “I wanted to capture the truth of those interactions and spend time with them – to be brave, and we were brave with it. We were brave in that we said, ‘We’re making a 21.00 BBC One show. Let’s have a six-minute conversation in a car.’ And we did it.

“It’s just two characters and no plot. It’s fucking brilliant. At 21.15, I managed to get a scally saying ‘tracky and trabs.’ It’s bizarre but it shows people they were going to watch something they hadn’t seen before.

“It was almost a test for the audience. We said to them, ‘If you enjoy this, you’re going to enjoy the rest of it.’ We challenged the audience to get over that first hurdle, and that’s what I’m most proud of.”