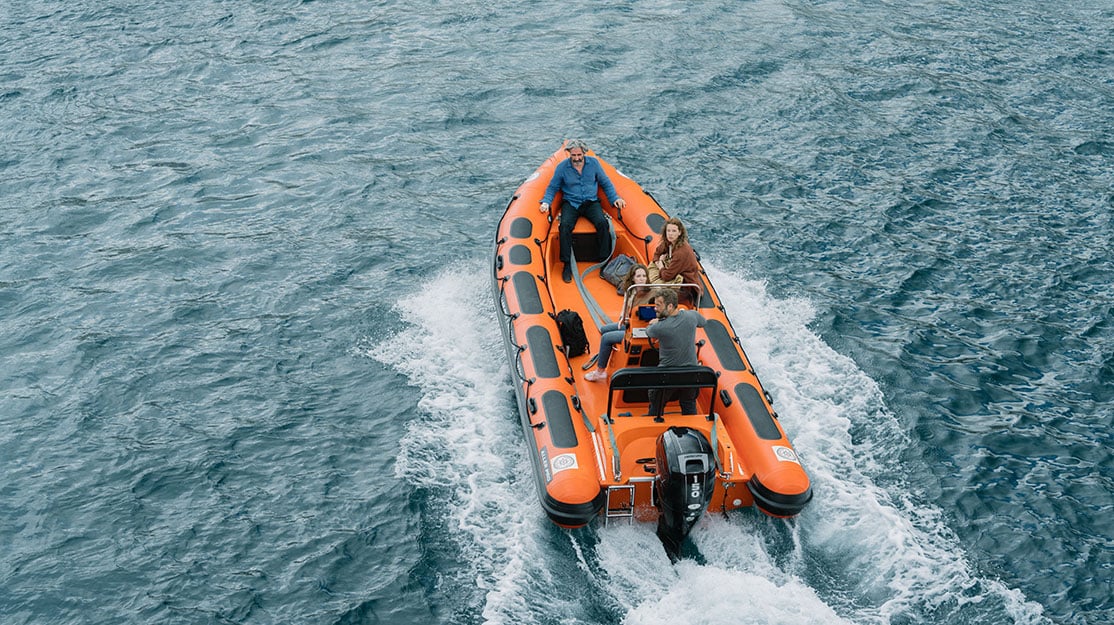 The Head executive producer Ran Tellem and director Jorge Dorado dive into the climactic scene of season two to reveal how the cast ended up adrift in the Atlantic Ocean.

Murder-mystery survival thriller The Head returned for a second season in 2022, continuing the battle between good and evil in an isolated and inhospitable location – this time aboard a freighter that is home to a scientific mission following the events of season one in Antartica.

The whodunnit is defined by the three words melded together to make the genre – it’s all about who did it. In keeping with the tradition, we knew from the start that the peak of the series would centre on an unforgettable scene where all is revealed. It’s a scene that would answer all the questions that kept the viewer hooked from episode to episode.

In season one, that scene was the protagonist leaving the scene of the crime. The characters are led one way, and while they think one thing, the viewers are given the ‘how didn’t we see that coming?’ surprise ending.

Expanding to season two
Coming to season two, we were looking at how to continue a story that had supposedly ended. There were many questions going around our minds as we built the new season – from where we place the new season and how we restart the action and the story, all the way through to how the crucial final scene would look.

As mentioned, the final scene and the tell-all is crucial in the whodunnit genre. Fortunately, our writers Jordi Garcelán and Mariano Baselga came to us with an excellent premise for the last episode of the season, which would take place with five survivors all together on one lifeboat. The reference to Alfred Hitchcock’s Lifeboat was not lost on us. It’s one thing for Hitchcock, the master of filmmaking, to maintain tension and interest for 90 minutes, but could we pull off a final 20-minute scene that would captivate the audience and provide the full cathartic release from the grand reveal?

The success of this scene, and ultimately the series, relied on a number of factors, the main ones being the script, the direction and the acting. Once we felt the script would deliver what we needed, we met with the actors over dinner to talk about the very long and climactic final scene. The actors laughed and read their lines in an exaggerated way. It must have been their way of releasing the tension. Their initial thoughts were, ‘Will we be able to do all this? And will we be able to do it while in a lifeboat on the open water?’

The scene had a great dramatic arc for all of the characters. They all went through disappointment, fear, surprise, love and horror in just a few minutes. But that was not what made them nervous – they have been used to embodying their characters through dramatic and tumultuous times in both of the series already. What worried them was Jorge’s intention to shoot the whole scene for real – in the middle of the Atlantic Ocean, with the boat adrift, and without VFX.

Taking to the sea
The scene was rehearsed several days before in the port to choreograph every detail and measure every movement, line and emotion. Once we had agreed on the result we wanted to obtain on a dramatic level, we divided the scene into three parts. This was done so we could easily understand which block we wanted to shoot and when, while in the middle of the sea.

The scene was shot over three consecutive days offshore near a small marina off of the island of Tenerife, Spain, with two cameras on a dinghy, an underwater camera and a drone.

It was certainly a tough shoot. The actors were literally captive in the boat, so they themselves would each bring the props to the fore when we would repeat a take, as well as doing their own make-up and costume touch-ups. They were the ultimate professionals.

While waiting, they would take out hidden umbrellas to protect themselves from the sun, as there was nowhere to take refuge to rest. This almost forced them remain in character while waiting for the next shot.

Luckily, the weather was with us and there were no differences in light during the three days of filming. The entire technical and artistic team remembers those days as the most complex and exciting scene they had ever shot.

The unique hook
What’s great about this scene, and what sets it apart from other returning series, is the ‘and, also,’ which comes from following on from the first season. In season two, we thought about the next step, how we could close one story and then open up a whole new one, with new action and narrative but with a lot of the same characters and background.

This last part was also the last to be edited, almost six months after the first shoot. This was when we also took the final decision on how to end this season, with this pivotal lifeboat scene, closing the story and satisfying the audience – ‘and, also’ leaving enough for the story to potentially continue.