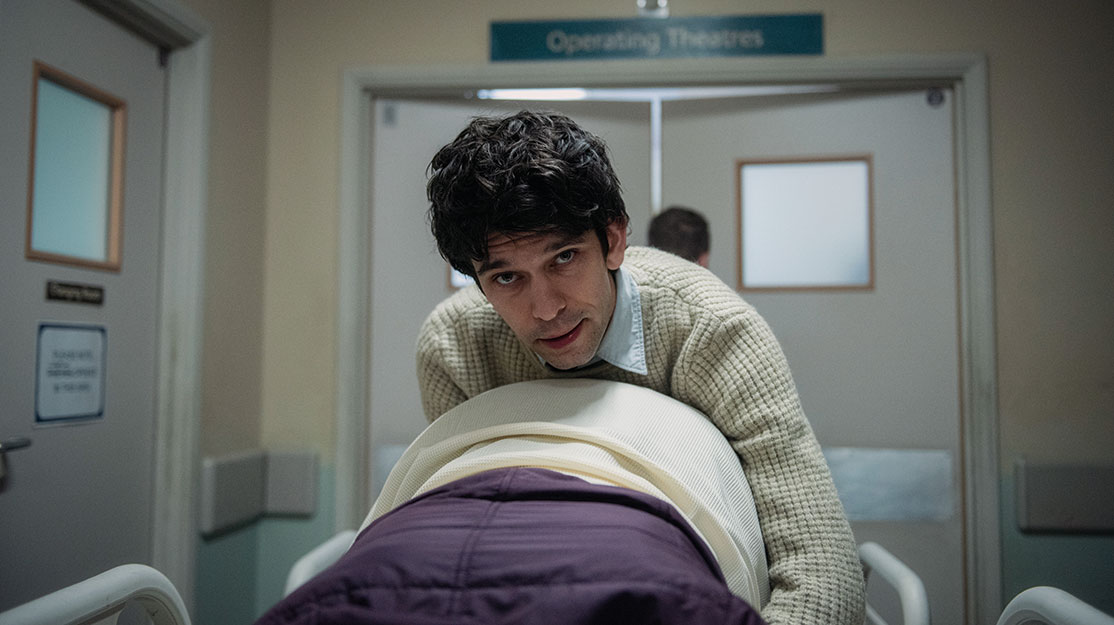 Scene Stealer: This is Going to Hurt

Lead director Lucy Forbes looks back on the opening scene of the BBC’s hospital-set comedy-drama This is Going to Hurt, which stars Ben Whishaw as a struggling junior doctor working for the NHS.

Having previously directed shows such as In My Skin and The End of the F***ing World, director Lucy Forbes is no stranger to balancing the delicate demands of comedy and drama in a single series.

“For me, comedy and drama walk hand in hand. That’s truthful storytelling to me,” she says. So when she read the script for the first episode of This is Going to Hurt, Adam Kay’s dramatisation of his personal diaries chronicling the funny highs and desperate lows of his time working as a junior doctor for the National Health Service (NHS), “I just really wanted to bring it to life. It didn’t hurt that Ben Whishaw was attached to star, and Adam was incredibly passionate about telling the story in a really authentic, truthful, naturalistic way, which was something I felt was really important to do as well.”

The seven-part series, produced by Sister for UK public broadcaster the BBC and AMC in the US, follows Whishaw as Adam, a junior doctor working crippling hours while making life-and-death decisions in the obstetrics and gynaecology department of an NHS hospital.

Setting the tone for the whole series, which is distributed by BBC Studios, Forbes wanted everything about the show to feel real, from the performances to the look of the hospital. As it’s Adam’s story, she also wanted the audience to “feel like they were strapped in next to him going along for the ride, rather than being observers of the story. The production even commissioned its own shade of blue for the hospital scrubs.

“We are with Adam the whole time. We don’t stop – if Adam moves, the camera moves and everything is from his perspective,” she says. “It’s his story, it’s his view of the NHS. We shot it handheld so we could react to the story as it played out.”

Everything was approached in a naturalistic way, apart from the lighting, which was heightened within the purpose-built hospital set that was constructed at an old university building in Whitechapel, East London. “We used as much natural lighting as possible, as well as practical lights that would actually be there on set to light stuff, again to make it feel real,” says Forbes, “but also to give it a cinematic feel within the mundanity of an environment that everyone knows.”

The series opens with Adam waking up. Initially, he doesn’t know where he is, and neither does the viewer as the scene begins with an extreme close-up on Adam’s face. The camera then slowly pulls back to reveal he is in fact in his car, having fallen asleep in the hospital car park after a long shift.

“As soon as we discover he’s at a hospital, we’re off,” says Forbes, with the camera following Adam back into the hospital where he is late for his next shift. “We instantly feel the relentlessness of his job. He doesn’t stop moving and we don’t stop, and we’re completely introduced to hospital life and the microcosms of people who appear at the hospital, whether it be someone with a broken leg, someone smoking outside or people having babies.”

Very early on, a medical emergency means Adam must rush to help a woman in labour. He brings her to the ward via the hospital’s paternoster lift – a string of open elevator compartments constantly moving on a loop – before help arrives in the form of Shruti Acharya (Ambika Mod), a young trainee still finding her bearings and regularly the target of Adam’s sarcasm, which is often delivered directly to the camera.

“The big thing for this opening scene is we really had to bed in Adam as a character and make the audience want to go with him,” Forbes explains. “Getting the right balance of that performance tonally was really important because, on paper, the character is highly complicated. He can be pretty unlikeable. Throughout the series, we slowly reveal why he is like he is and we become more empathetic towards him. It was all about not pushing the humour too far and not making him feel too smartass, but ultimately realising it’s because of the system he’s working within that he behaves in that way.

“We set up so much in that opening scene. We set up a very tired doctor dealing with an emergency situation, in an environment that is understaffed, and where the staff who are there aren’t necessarily experienced enough to deal with it – plus getting on this crazy lift. Getting that tone right was something we worked really hard on. We discussed it at length with Adam and worked with Ben to get it right, to make his character likeable just enough that the audience wants to go with him.”

The show was largely shot in chronological order, mainly because the production had built the hospital set where they spent seven weeks filming. That helped bed the characters in properly and establish Adam and Shruti’s relationship, which is at the heart of the series.

“He’s annoyed and irritated by her, she’s incredibly nervous at the start and, as their relationship builds, shooting chronologically really helped us because that’s what was actually happening,” Forbes recalls. “We had this very fresh actress [Mod] who plays Shruti, who is incredible, but playing opposite Ben Whishaw, this incredibly experienced national treasure of an actor. Her natural nerves really helped bed in that Shruti and Adam chemistry at the beginning. And as she grew confidence, so did her character.”

“Saying that,” the director continues, “the opening scene was so complicated to shoot. We couldn’t film in a real hospital because of Covid, so the exterior of our hospital is in Ealing [in West London]. Our set build is in Whitechapel. We couldn’t build the paternoster lift so we had to use a real one in Sheffield. We could film them getting on in Sheffield, but only two people were allowed to get in the lift, so then we had to build a slightly bigger lift to shoot the interiors with a green screen.

“Then we had to shoot the opening shot in the car when he wakes up at our offices because we didn’t have time to shoot in the car park at the hospital. It was incredible. It was just this huge puzzle.

“Andreea Paduraru, who plays Andrea, the pregnant lady, was there right at the beginning and right at the end of the shoot for that five -minute scene. We just kept bringing her back for little moments to give birth all over again.”

Ultimately, the opening scene sets up the mix of tension and gallows humour that runs through the rest of the series. It also shows how things inside a hospital can change in a heartbeat.

“It just really presses go on the rollercoaster that is life as a junior doctor in the NHS,” says Forbes, “and sets out these really complicated working relationships – that push and pull between the doctors and the midwives, the frustration of an inexperienced junior doctor Adam has to look after and the annoying patients who constantly need attention. It sets up the mess and grit and crazy, relentless world of being a junior doctor.”

tagged in: BBC, Lucy Forbes, This is Going to Hurt