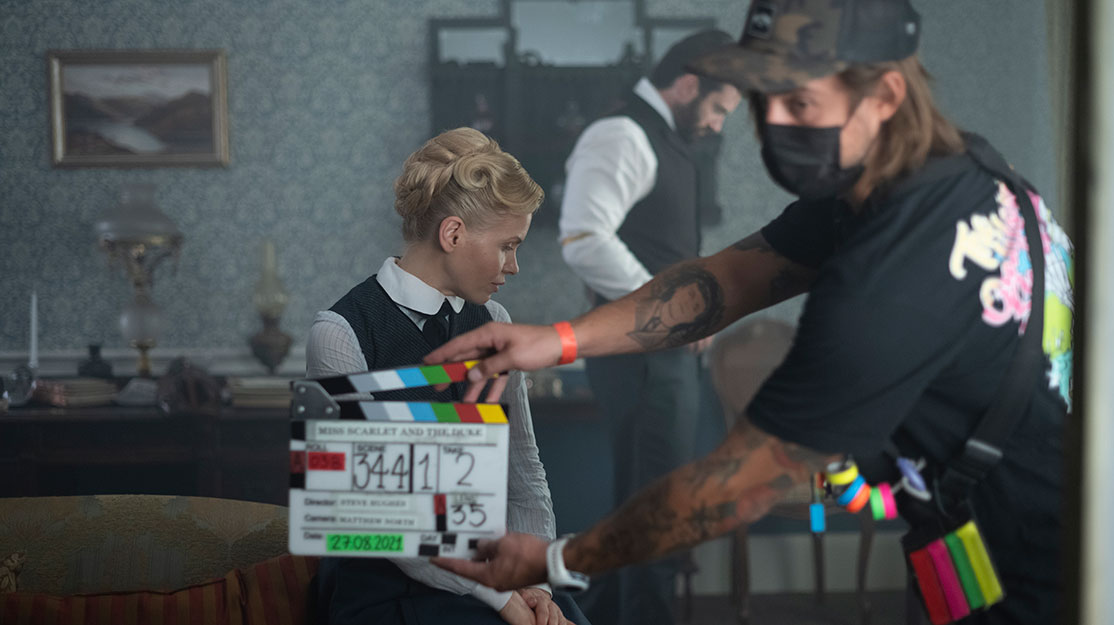 Production designer Yoxa Goran Joksimović and set decorator Lana Skundric reveal the challenges of moving production of Miss Scarlet & the Duke from Ireland to Serbia for the period drama’s second and third seasons.

Set in Victorian London, crime drama Miss Scarlet & the Duke follows the adventures of the first ever female detective. Eliza Scarlet (Kate Phillips) sets out to establish herself as a private eye after the death of her father, and finds help in the form of childhood friend and potential love interest Inspector William ‘The Duke’ Wellington (Stuart Martin).

But though the series is set in London, season one, which debuted in 2020, was actually filmed in Ireland. Then when the show was renewed for a second season, the production team faced the challenge of replicating the show’s locations and settings while filming in Serbia.

Season two begins a few months after the end of S1, with Eliza having solved her father’s murder but continuing to face the challenges of being a female private detective in male-dominated Victorian London. The series was created by Rachael New, who writes alongside Ben Edwards.

Coproduced by Masterpiece in the US and Element 8 Entertainment, with pre-investment from UKTV, S2 debuted in the UK on Alibi in June and will launch on Masterpiece on October 16. The series, which has already been renewed for a third season in 2023, is distributed by PBS Distribution.

How did you join Miss Scarlet & the Duke?
Joksimović: It was a very busy time in Serbia, with a lot of interesting projects to consider getting involved in. When I received a call from [Serbian production company] Work In Progress [WIP] about Miss Scarlet, the challenge of moving a London-set period drama – something I already had much experience with –  to Serbia really appealed to me, so I accepted it.

Skundric: I have worked with WIP on several projects and also worked with Goran at the beginning of my career. He was my first mentor, so joining this project felt like a natural fit.

Tell us about your initial conversations for seasons two and three.
Joksimović: The initial conversations for seasons two and three were about how we could actually move the scenery from Ireland to Serbia. What could we do to maintain the same look and feel, as well as stay in the absolute same design direction? We discussed how we could  share scenery by finding real locations, and what would be necessary to build.

Skundric: Goran and I had many conversations with Rachael New to understand her vision for the series. The challenging part was that she was based in England, whereas Goran and I were in Serbia, so we had multiple Zoom calls discussing storylines, characters, tone, colours and so on. The biggest task for me was to create interesting and accurate sets as we saw in season one. Since we are not filming in the UK, a lot of locations needed adapting. It’s a challenge trying to find furniture matching the Victorian era in Serbia.

What challenges or opportunities did moving production to Serbia present?
Joksimović: It was a chance to conjure up something completely different from our space and surroundings to create this from scratch. At the same time, it was very challenging to find elements like furniture, architecture, trinkets and everyday objects and transform them for the period. Building Victorian London exteriors and interiors, with all their characteristics and details, was a daunting task but we achieved it through our resourcefulness. If we didn’t have a specific item, such as a carriage, we built it.

What kind of research did you do before starting work?
Joksimović: We researched what life was like in London during the era. We explored this through the literature of Charles Dickens and films based on that literature. Fortunately, Charles Dickens is a worldwide phenomenon, so these works are very well known. We have collected a sea of photographs depicting Victorian London, dealing with various aspects of the way of life at that time for all social classes. We have also collected literature on Victorian and Edwardian architecture, furniture and examples of illustrations and prints.

Skundric: The research phase was probably the most interesting part of the process of creating ‘Elizaland.’ We searched for references in books, documentaries, old photos and movies, and also explored paintings and architecture from that time.

What does your job involve during pre-production and then once shooting begins?
Joksimović: During pre-production, our work includes research, sketching and mood boards that would allow us to support the characters and events in the script. Then, technical drawings and documentation are created to enable the construction of new buildings or the adaptation of existing ones. Of course, the cost estimate is also a very important factor. During the filming, we monitor the recording process, the preparation of sets, and the dressing of sets in real locations and in the studio. To maximise efficiency, some of our sets were redressed multiple times.

Skundric: We had in-depth conversations with the whole team, including the creator, production designer, director of photography, costume designer and directors. Then we would get into research, followed by mood boards and sketches. It’s like putting together a puzzle – every single piece of this process is equally important to the final picture. I love it when you put everything together and the dream becomes reality. When shooting begins, organisation and logistics are the most important. That is when we collect a variety of furniture and props in storage before filming starts, so we can quickly dress locations and sets according to the production schedule.

Yoxa, what are some of the key set builds we will revisit from season one?
Joksimović: These are the sets that are directly related to the main characters, which include Eliza’s house, Eliza’s office interior and exterior and Scotland Yard. In the first season, some of these sets were in real locations in Ireland, so we had to completely rebuild them as sets.

What kinds of new sets did you need to design for season two?
Joksimović: There were a lot of different sets we had to create for season two – building the backlot that was our London, Eliza’s street, the market street, the entrance to Scotland Yard and many more. The spectrum was very broad, but it was a great pleasure to design on this series.

How did set builds mix with real locations during production?
Joksimović: We were faced with working out how to transform Austro-Hungarian and Central European architecture into a Victorian style. We had to be resourceful by making parts of walls with Victorian details and using them to cover compromising elements with a lot of greenery, curtains and scaffolding. I think the result was seamless.

Tell us about the teams you worked with.
Joksimović: Our crew is exceptional – we had a great rhythm of work. Our set designers created a pile of different drawings, our set decorating team were coming up with creative solutions, and our props department and graphic designers were all fantastic. Working on Miss Scarlet & the Duke was a unique experience and I really appreciated our talented team.

Skundric: We had an amazing team – most of us knew each other from previous projects and many of us are friends outside of work, which made this project even more interesting and enjoyable. Sometimes it can be challenging working on a tight schedule with multiple locations, but it’s certainly much easier and simpler when you have a team you trust.

What were the biggest challenges that you faced?
Joksimović: To start with just a concrete surface and build Victorian London was a feat. We created different areas within Victorian London, including ‘smart street,’ a market, ‘slum street’ and alleyways, in addition to creating more than 20 different interiors. We built an entirely new world and brought life to it in such a short amount of time – that was the challenge.

Skundric: The biggest challenge we faced was not shooting in the UK. The architecture is very different in Serbia and there are not many Victorian buildings, so we had to imagine  how the scenery should look and make alterations before we decided to go for it. Also, how could we top season one, which looked phenomenal. We had a lot of help and guidance from Rachael New. In season one you get to know Eliza, and now in seasons two and three you follow her to a labyrinth of intriguing and strange places that make the show even more interesting.

Did you have a favourite set to work on?
Joksimović: The backlot holds a special place in my heart. We also used a generic room that was repurposed many times to create multiple sets. There was also the French hotel we created, which was beautifully decorated with custom wallpaper, chandeliers and so much more detail.

Skundric: One set is Wentworth, where we managed to recreate the world of luxury shopping in a Victorian department store. Another favourite set is the Garret Museum of Natural Science. How many times in life do you get the chance to create a Victorian museum of natural history?

What did you learn working on the show that you wish you had known beforehand?
Joksimović: One of the most important takeaways was something I already knew, but it was magnified on this project: it is critical to have a clear, concise vision for a project. That vision becomes the skeleton around which everything can be built, and having agreement from the team on that master plan is essential to successfully execute it.

Skundric: I learned that you have to be 100% involved and really believe in yourself and your crew, so each member feels good energy and can create something extraordinary.