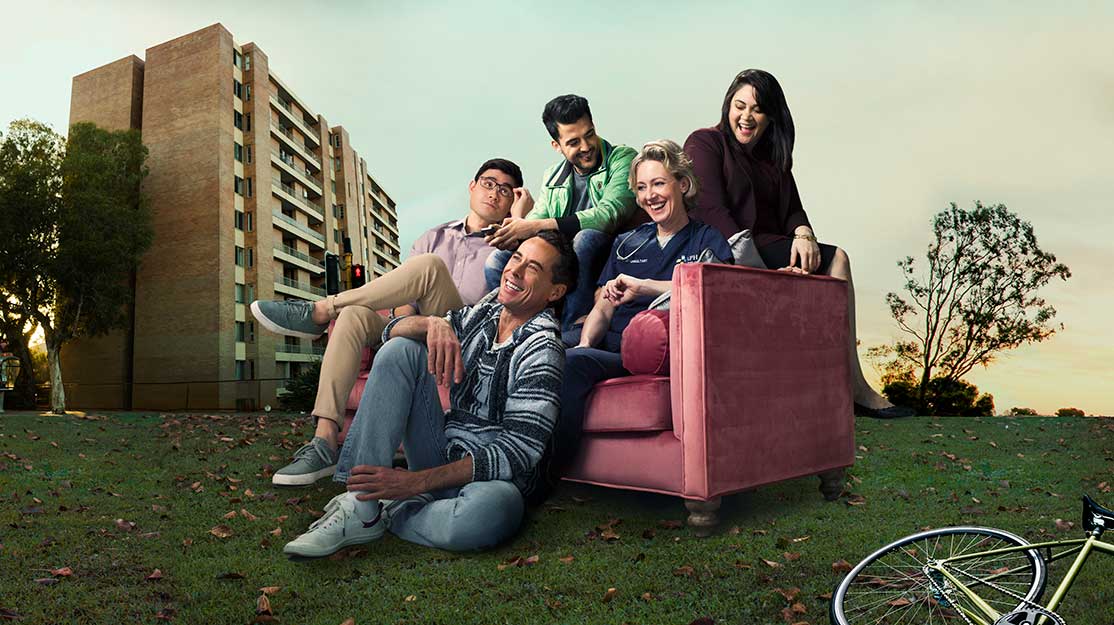 Warren Clarke, showrunner of Australian ensemble drama The Heights, discusses the making of this series set in a housing tower and the challenges of launching a serial drama.

Is there a more challenging type of show to create than a serial drama, with numerous characters and storylines to introduce while ensuring they feel familiar and relatable to viewers from the outset?

That was the unenviable task facing Warren Clarke, co-creator and showrunner of Australian series The Heights. The 30-part, 30-minute drama transports viewers to the fictional inner-city neighbourhood of Arcadia Heights, exploring the relationships between the residents of the Arcadia social housing tower and the people who live in the rapidly gentrifying community that surrounds it.

Humorous, thoughtful and entertaining, the series is also driven by a diverse group of characters who tackle a range of social issues that face many Australians today. The ensemble cast includes Shari Sebbens (The Sapphires), Marcus Graham (Secret City) and Roz Hammond (Shaun Micallef’s Mad As Hell).

From the first episode, which launches on pubcaster the ABC tomorrow, all manner of subjects from birth, death and everything in between are dramatised as the series aims to hit the ground running, as if placing cameras into the homes and workplaces of people who are just going about their daily lives, without the drawn-out introductions and exposition seen in many long-running dramas gone by.

“You don’t want it to feel like a pilot episode. It’s that old thing of starting with episode two,” Clarke says. “It’s coming at you pretty hard and fast. We wanted it to be an episode that captures everything the show is about. It’s about love and loss, birth and death, families, and struggle and triumph, as we all face day to day.

“Viewers want to see characters in situ. I don’t think we need introductions the way perhaps we traditionally did in television. They’re just so savvy and know the medium so well. The curtain has been pulled back on television and storytelling so much. It’s actually really liberating as a writer because they meet you more than halfway, and that lets you just dive into the story.”

Clarke conceived the idea behind The Heights with ABC executive producer Que Minh Luu when they worked together in development roles at producer Matchbox Pictures (The Slap, Barracuda), with the pair often discussing the kind of television they wanted to make and what format it might take.

“Certainly in Australia at the time, there was a huge conversation in our industry about opportunities for emerging diverse voices and pushing the bar a little bit in terms of what we were seeing on television,” Clarke recalls. “That led to the idea of an ongoing series with a story that would always have a sense of tension. We looked at the idea of gentrification, which is a global issue that immediately speaks to ideas of the wealth divide, divided politics, separation and difference.”

The notion that there is a universality in the experiences and challenges we all face, no matter our background, religion or politics, would go on to shape the series, with a housing tower at its centre – a space where families and other groups of people from all walks of life naturally become neighbours.

“It is reflective of the world we live in, and that was what we always tried to drive towards,” Clarke says. “These are the streets we know and the stories we see. That applies to us and that will apply to a broader audience. We didn’t necessarily want to tell culturally specific stories. Characters are completely informed by a cultural point of view but while tapping into that universality. I hope that’s what pulls audiences in; that they connect to those characters no matter what community they might represent.”

The Heights is produced by Matchbox and For Pete’s Sake Productions, with NBCUniversal International Distribution handling worldwide sales. As the showrunner, Clarke was tasked with managing the logistics of the series as well as the creative side, and he believes it’s important for a series to have a “creative conduit” through which all decisions pass.

In the writers room, “it was a learning process that evolved as we went,” he says. “The key really was to have a team that could service the series as a whole,” Clarke adds, pointing to script editors Hannah Carroll Chapman, Romina Accurso, Peter Mattessi and Megan Palinkas, who ensured the multiple stories stayed on the right path.

“Then it is a question of bringing your writers in to break story and plot episodes. Sometimes you might have a writer who wants to write one of the episodes because they’ll have a point of view and an authenticity to inform that story, so you want to encourage that as much as possible. Writers rooms can sometimes be challenging, particularly when we plotted at pace, but I was predominantly in the room for the whole day, every day, to ask those questions – is this our show? Is this how our show tells this story?

“By and large, any new show is particularly tough. It has its really high moments and really low moments, but it has been a positive experience. A lot of people have come away feeling like they’ve created something that feels true to them and there’s an interesting voice there that people want to see.”

With filming taking place in Perth, Western Australia, the creative team were conscious of not locating the series in a specific part of the country. “It is Anywhere, Australia,” Clarke says. “You want the sense that Arcadia Heights could be your local neighbourhood.”

Once production was underway in the city, it unfolded at a rapid pace, employing nearly 100 local crew and 93 actors across speaking and extra roles. Two episodes were shot per week, with four days in the studio and then two crews working simultaneously on location on Fridays, effectively creating six shooting days in a five-day period.

Scenes were filmed with at least three, and sometimes four, cameras on operators’ shoulders, meaning they could be flexible and mobile to get as much coverage as possible and move on to the next scene without too many retakes. This, in turn, informs a gritty visual style with noticeable camera movements.

“Jim Frater, the DOP, has such a great instinct for capturing the truth of any given moment,” Clarke says of the shooting process. “It may not be a wide [shot] and two singles, it might be a close-up of someone’s hand or the empty space in a room. He’s a very visual storyteller. And because you have all the cameras in there at once, you’ve got an incredible amount of coverage. The advantage of that is that it keeps the performances agile and interesting, and you empower the acting. The actors were able to let the drama inform their performance, which would then inform how the cameras captured it.

“As we witnessed across the shoot, the camera team learned the nuances of those actors and those characters and were able to anticipate them. In many ways, it feels like a really quick shoot. If we’d shot it traditionally, it probably would have been more challenging. But because we had a visual style that allowed us to be really fluid, we could move quickly. There was definitely energy in the series, which was great to see.”

Undoubtedly the initial challenge was writing the series, once the creative team had settled on exactly what kind of show they wanted to make. When that was agreed, Clarke describes a feeling of empowerment among the writing team, which then helped them push the boundaries of traditional serial dramas.

“We were constantly trying to push and push, and the crew were so embracing of the idea of ‘let’s just knock it out of the park.’ They wanted to push as hard as us; they just believed in the show so much and that created challenges, like how much can we film in a day,” he says. “Yet they never faltered, they never complained or begrudged the idea of trying to make a great show. Everybody came to work to make a great show and was committed to doing the best work they could, which carried the show through those tricky days.”

Clarke admits that in many ways, the television landscape is saturated by content. But for creators, that presents an opportunity to tell more varied and diverse stories.

“In a world that’s challenging and where big questions are being asked politically and socially, there’s great appeal for a show that engages with its audience and isn’t afraid of those issues but also has a sense of human spirit,” he adds. “This is also a show that could bring family viewing together and I do think there’s room for that in the current television landscape. I’m like anyone, I like the gritty stuff too but there’s room for us all.”