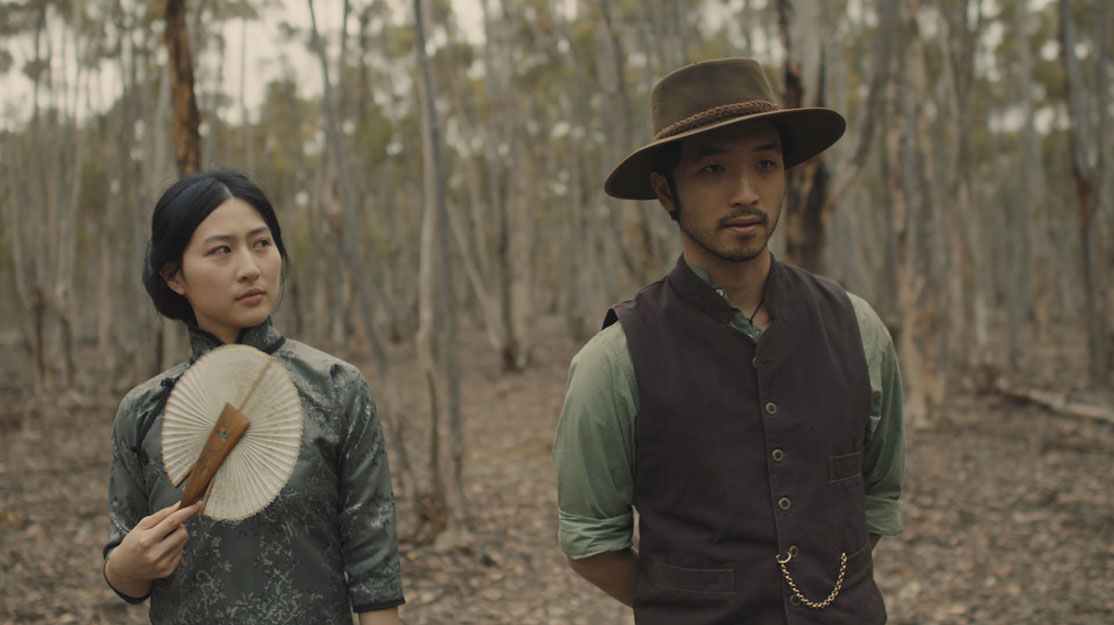 A revisionist western with elements of period drama and murder mystery, four-part miniseries New Gold Mountain tells the untold story of the Chinese-Australian experience during the gold rush down under in the 1850s.

Inspired by real events, the series opens in Ballarat, Victoria, in 1857, where European, Chinese and Indigenous Australian characters live together in a wild-west frontier town as they seek to strike it rich by finding gold. The discovery of a murdered woman then leads to the hunt for a killer.

Yoson An (Mulan, Dead Lucky) stars as Leung Wei Shing, the headman of the Chinese digging camp trying to maintain the fragile harmony between Chinese and European workers, alongside a cast that includes Alyssa Sutherland (Vikings), Christopher James Baker (True Detective), Dan Spielman (The Code) and Mabel Li (The Tailings).

“New Gold Mountain is set at the height of the gold rush era of the Australian frontier in 1850s Victoria,” says director Corrie Chen, speaking ahead of the show’s digital premiere during Content Australia On Demand. “It was during the height of racial tensions between the white Europeans and the Chinese. Our lead character, Shing, is a charming but morally ambiguous headman of the Chinese, and acts as a liaison between the white Europeans and the Chinese community as he navigates the discovery of a dead white woman on the day of the mid-autumn festival.”

Created and written by Peter Cox (The Insider’s Guide to Happiness), the series comes from Goalpost Pictures (Fighting Season, Cleverman), whose producer and partner Kylie du Fresne wondered why the story of Chinese miners in Australia had never been told before.

“Not many Australians, and certainly not the world, knew there was Gold Mountain in the Californian gold rush and when that ended, a very large majority of people came over to Australia – including 10,000 Chinese – and it became New Gold Mountain,” she explains. “For a period, it was the biggest gold rush in the world. It was just an area I was really interested in.”

Broadcaster SBS is best known for topical, contemporary dramas such as Safe Harbour and The Unusual Suspects, and hadn’t actually made any period dramas before expressing an interest in New Gold Mountain. The channel and Goalpost then quickly agreed to develop the project together, and two scripts were commissioned within several months. “It was a very quick and dream run by a shared great interest in this period,” du Fresne says.

“We’ve been telling all the producers in Australia for many years that we would never make a period drama because we simply couldn’t afford to do it,” admits Marshall Heald, SBS’s director of TV and online content. “But our past informs our future and present, so we’re always fishing around trying to find different periods of interest. For us, the Australian gold rush is part of the mythology of Australia, but it has never been told from a Chinese perspective. At the time the show is set, one-third of the Victorian population were Chinese migrants, so it’s a really extraordinary opportunity to tell a revisionist history and help Australians understand their history is quite different from the one we’ve often heard of before.”

For Chen (Homecoming Queens, Wentworth), the story of the Chinese in the Australian gold rush is quite simply the Chinese-Australian story. “It’s been waiting to be told,” says the director, who remembers hearing about the period for the first time when she moved to Australia, realising that rather than being relatively recent migrants, Chinese people have been part of Australian history for many decades.

“A lot of the time, the perception is we’re these transient people who came in and out of Australia,” she continues. “To me, this show was a way of reclaiming that history, and the revisionist western genre is simply the lens through which we’re viewing the story, seeing Chinese people in history who have always been portrayed as the ‘other’ and reclaiming the image of the powerless Chinaman in the Western landscape. So the visualisation of the Chinese in this show is always incredibly loaded and important to me.”

Cox writes the series with Yolanda Ramke (The Haunting of Bly Manor), Benjamin Law (The Family Law), Greg Waters (Riot) and Pip Karmel (Total Control), and Chen describes the murder mystery at the centre of the show as the “rocket fuel” that layers tension between the characters and the competing storylines that initially appear unconnected until the clues start to come together.

“What sets this show apart is the tone,” she says. “There’s a really nice playfulness in the writing that the cast really took to as well. As a director, when you know you can trust the text, it means you can just push and play with the performances in directions that might not have been the original intent, because the story is so strong and it works. That’s when you discover this other X factor. The tone is something I’m really excited by. I’m struggling to think of another show that has Chinese cowboys in it.”

Meanwhile, the drama doesn’t just give Chinese people involved in this period of Australian history a voice in figurative terms, but also literally, with much of the dialogue in Cantonese. Chen says the first challenge making the show was finding suitably skilled actors who could also speak the language fluently.

“That meant the pool of actors we could book quite quickly became limited,” she says. “Having said that, the casting meant we were able to discover a breadth of new talent with the show. We’ve also had the help of a dialect coach, as well as a Cantonese coach, on set at all times because so much of language is about the nuances, which affect performance as well. It became quite eye-opening how language affects and impacts our identity as people.”

Casting began with finding Shing. Testing very early in the process, An caught the eye of the production team immediately, and was confirmed in the role just as he was appearing on the big screen in Disney’s 2020 live-action remake of Mulan. Next on the call sheet was Australian actor Sutherland, who plays Belle, before Baker was cast as Patrick.

“They were the three main cast we started with, and then we built out an extensive casting process looking for the other 65-odd speaking roles,” du Fresne says. “It was the largest speaking cast I’ve ever been involved in for a TV series. It seemed to go on forever. It was ultimately a wonderful but very lengthy casting process. The final main role we cast was Zhang Lei, and one of the most exciting casting discoveries for us was Mabel in this role. She was a recent NIDA [National Institute of Dramatic Art] graduate and this was her first major screen role. She’s a superstar. We’ll be holding on to her for dear life in Australia once people see New Gold Mountain.”

The show’s cultural clash is also highlighted by its score, which takes inspiration from both Eastern and Western music. Chinese-Australian artist Cat Strat wrote an original song that plays out at the end of episode one, while her Mandarin cover of Tomorrow, originally by Australian rock band Silverchair, features at the end of the series.

“This angry teen emo song being reimagined by a very young, talented Chinese-Australian woman will close out our show and, to me, having those two pillars of sound really summarises our goals and ambitions for what the show will be,” says Chen.

Those intentions are evident in SBS’s own description of the show as its most ambitious drama yet, and visible on screen in the elaborate costumes and production design that fill every scene, with filming taking place at Sovereign Hill in Ballarat and around Melbourne and regional Victoria.

Heald believes the drama, which is due to air on SBS this autumn, is worthy of comparisons to HBO’s standout western series Deadwood, describing New Gold Mountain as “extraordinarily cinematic.” Du Fresne also thinks the show, which is distributed by All3Media International, can attract worldwide interest thanks to its blend of period drama, western and murder-mystery styles and themes.

“There’s lots of intrigue. There are lots of clues. Everyone is a suspect [in the murder] at some point,” she says. “All of our characters are doing surprising, intriguing, questionable things. And because of its era, it is incredibly international in terms of the voices and the faces we see on screen. As well as the key Chinese characters, our lead characters are Irish, Scottish, English, Hakka or Indigenous. It really is a true international melting pot, and that is absolutely true to the period of the story.”