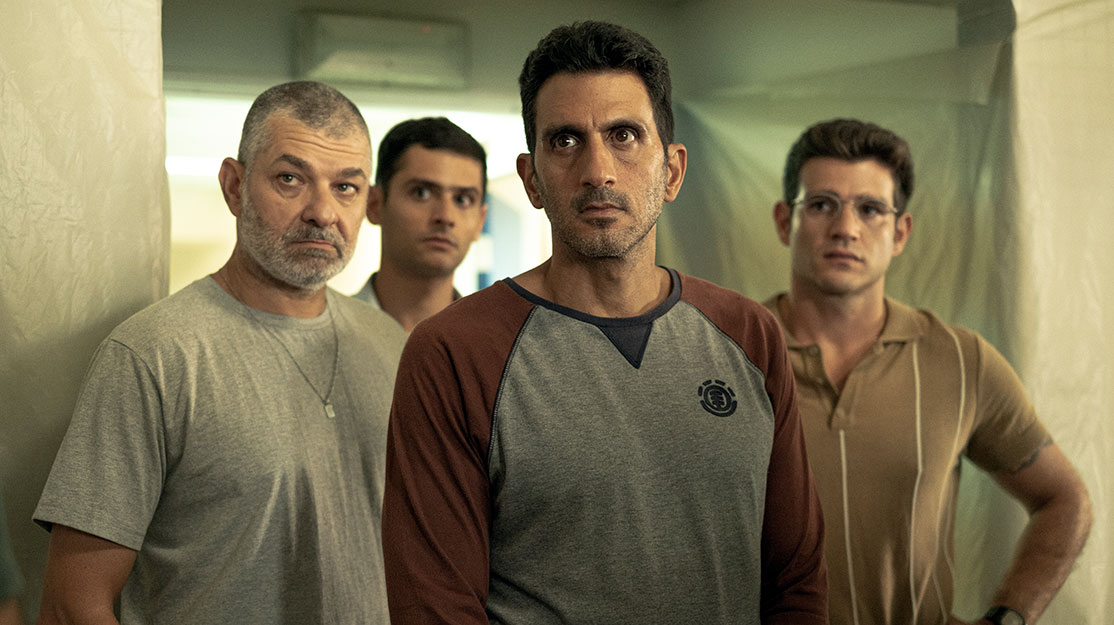 Writer Yuval Yefet and director Rotem Shamir speak to DQ about their Israeli drama Line in the Sand, in which a moralistic cop returns to his home town to overthrow the local gang lord, only to find his integrity diminish as war erupts.

Despite his relatively short amount of screen time, the name Maor Ezra haunts the opening episode of Line in the Sand. His power and influence are etched onto the faces of the cops who refuse to track him down, visible in the smirks of his runners who know they have his protection and ignored by the one police officer willing to wage war on this gangland boss.

The Hebrew-language series, which is halfway through its eight-episode run on Israel’s Keshet 12, is set 15 years ago in the coastal city of Nahariya, where the idealistic and morally unshakeable detective Alon returns after a 20-year absence to lead the local police station’s investigations unit.

Finding a city in turmoil and in the grip of Ezra (Shlomi Ifrah), Alon (Tshai Halevi) decides to battle with the gangster on his own terms and goes against everything he believes in, blurring the line between right and wrong. Along the way, secrets are revealed as to why Alon returned home in the first place as his wife and daughter become entangled in the battle for control of the city.

Produced by Koda Communications, Line in the Sand comes from co-creators Yuval Yefet and Rotem Shamir, who first met five years ago when they started working on a sci-fi series. Yefet later wrote several episodes of the third season of action drama Fauda, which Shamir directed and which was released last year.

“We work well together. We don’t need to talk a lot before we start working – we see things the same way, we have the same taste,” Shamir says. “In that sense, it’s a great partnership.”

During the development of Line in the Sand, the duo were also reunited with Fauda’s VFX supervisor Dan Sachar. “The three of us have almost become a small production company together. We all sit together in a small studio together,” Shamir adds.

“There are the most obvious things like explosions but there’s also a lot of invisible VFX,” says Yefet. “The show is set in the mid-2000s so we have to make the city look like it did back then. So Dan had to recreate the façade of City Hall – it looks very different from today.”

As head writer, Yefet also brings on additional writers to work with him after the treatment stage, which allows him to consider new perspectives on the unfolding story. “From the inception, we work together completely, developing the story, tone and season outline – it’s like ping pong, back and forth, constantly brainstorming,” he says.

“At some point, I’m left alone with the mountain of material to work with, so for me it’s a great collaboration [with Shamir and Sachar]. We can see from what Rotem has directed that he has a great sense of what comes from drama. As a writer, you can see the detail, so it’s great to work with someone who sees the broader picture.”

“There is a big lack of budget here in Israel, so you have to bring that experience of what you can and can’t do budget-wise to the process,” Shamir says. “Working with the writer from the start helps. We always want to have the right amount of drama and tension so that we have something we can contain within the budget.”

For the director, being involved in the development of Line in the Sand offered him a chance to shape the style of the series from the outset – an experience he didn’t have on Fauda, as the show had already found its visual rhythm before he came on board.

“Finding my voice within that framework was difficult,” Shamir admits. “Coming out of that, we all felt we wanted to do something else completely. So in that sense, Line in the Sand has a realistic tone to it, but it also has an operatic, epic, emotional drama to it – the family aspect, the choices the characters make. Even before any scripts were written, we referenced movies like [Bryan de Palma’s 1987 crime drama] The Untouchables and We Own the Night [2007] by James Gray, because we both feel tone is key in television. If you get the right tone and everyone understands the tone, everyone knows what to do.”

The origins of Line in the Sand can be found in similar events that played out in real life. Karni Ziv, head of comedy and drama at Keshet Broadcasting, sent Yefet and Shamir a documentary about a crime lord and wondered if there was potential for a scripted series.

“We thought it offered the opportunity to tell a classic cop story,” Yefet says. “This series is not about cynical or corrupt cops; it’s about heroes who need to face their dark side. With Karni at Keshet, that was our pitch for the show. From there, we decided which elements of the true story to keep and which to develop as new. We took it and made it much bigger. As part of our vision, we wanted to make this a very big drama with high peaks.”

The show’s setting was also a key part of its development. On screen, the series showcases the sandy beaches and urban landscapes that make up the northern coastal city of Nahariya, which becomes home to Alon and his family after he transfers from Tel Aviv further down the coast. Nahariya later becomes a battlefield as the detective wages war on his enemy.

“A lot of the reason why this happened [in real life] was because it was so local, which is how that crime lord was able to take over the entire town,” Shamir says. “It’s a faded beach town, so his activity never got noticed on a national level. There’s never been a TV show set in Nahariya before – they are all usually filmed in Tel Aviv or Jerusalem.”

“It was also a more appealing location because then Alon’s family were built into the show – they were threatened, rather than it being about justice,” Yefet notes. “All the characters in the show are on the battlefield. This makes for a strong element in the storytelling.

“In real life, these things took a long time to happen. People were being terrorised for a long time. In Line in the Sand, we made sure that every door is closed to Alon and that he has to try every other option. Episodes one and two are the breaking of Alon; we just break him down, scene by scene, until there is no other choice.”

As Alon loses himself in his battle with Ezra, his wife Micki (Shani Cohen) and daughter Tom (Avi Buchler) also become caught up in his police work. Micki is a prosecutor who decides she won’t “wait for a grenade to come through my door” and begins to investigate the gangster’s financial dealings, while Tom becomes romantically involved with one of the gangster’s foot soldiers.

“We actually made an effort to not have a ‘left alone’ family, with Micki left crying at home,” Shamir says. “We wanted these two female characters to have their own arcs and storylines and to interweave them with Alon’s. They’ve just become citizens of this town, so we needed to make them an example of what happens to people who live there. They get involved independently in Ezra’s activities, not because they are related to Alon.”

The show’s antagonist also gets his own story arc, but not one that viewers may expect. Initially, the creators did not want viewers to see Ezra’s family or any side of his life that could humanise him. Instead, they needed him to be an instant and constant threat.

“You don’t see his tender side; you only see him a strong, threatening entity,” Yefet says. “But as the show develops, we do give him more screen time and we see more of his choices, and we really dive into his family situation and his history. It was very important for the first four episodes to keep him mysterious and enigmatic.”

This approach to character means Lines in the Sand stands apart from other crime dramas. In fact, Yefet and Shamir prefer not to label it by the genre at all, such is Alon’s departure from any traditional screen detective.

“What we didn’t want to do was to make this too familiar or tongue in cheek, where the detective is witty,” Yefet says. “We wanted to go to this classic, heroic cop who is there to take down this one guy. It’s not The Shield; it’s not about corrupt cops. It’s about good, honest cops.

Shamir picks up: “There have been so many TV leads that have been pushing the dark side of personalities, so that viewers get sucked into a love/hate relationship with the lead. We wanted a classic hero – Alon has no choice but to fight back if he wants to save his family and his friends. It’s almost a western.”

Line in the Sand began production very early on in the coronavirus pandemic, with the creators deciding to “just go with it” after the initial lockdown period ended. Shamir says proceeding with the shoot felt like a “brave act,” but one that gave the cast and crew hope that some semblance to normality might be possible.

Another challenge more commonly associated with Israeli TV drama is the comparatively small budgets, which means the director had to delve into his box of tricks to make the series look more cinematic than might otherwise have been achievable.

“Our budget is almost like a catering budget for some US shows,” he jokes. “Here, people have very inventive and creative ways of how to do their job within their budget limitations. In that sense, we are unique and it’s an advantage because the storytelling has to be so strong.

“One example is when we get to a location and we need a set extension. On Fauda, we needed to shoot Gaza but our location had nothing beyond the end of the street. It’s just Dan adding in the rest of Gaza [with visual effects]. You always need to think outside the box.”

Though the series, distributed by Keshet International, has not yet been renewed for a second season, Yefet and Shamir conceived it with a three-season arc – a possibility that raises numerous questions over where Alon may end up beyond the first eight episodes.

“This one ends with a lot of stuff still to be revealed and explored further,” Yefet says. “Viewers can definitely expect us to take Alon as far as possible and to make the toughest choices, and these will define who he really is. There is a price to be paid by these cops, but there is also redemption.”