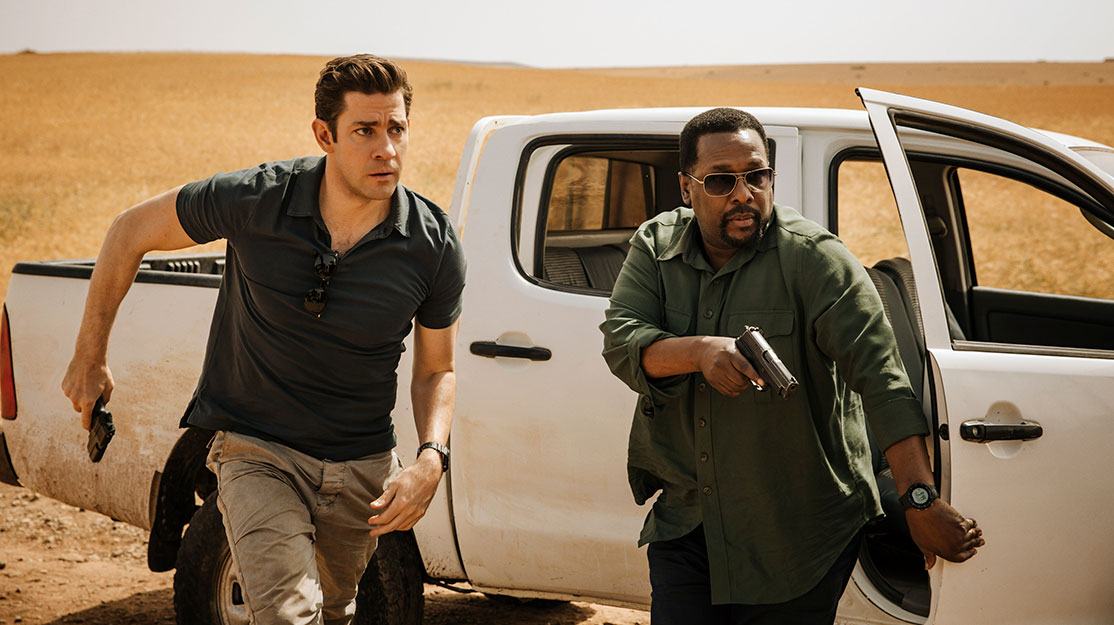 Wendell Pierce and Dina Shihabi, two stars of Amazon Prime Video action drama Tom Clancy’s Jack Ryan, tell DQ about how the series stands out for its blend of action and characterisation and for its representation of characters from an Arab background.

HBO drama The Wire, which is regularly hailed as one of the best series of all time, was among a handful of shows to air around the millennium that broke new ground by delving deeper into character and placing less focus on procedural storytelling.

Now 16 years after the first of its five seasons launched on the iconic US cable channel, one of the show’s stars can see the similarities between The Wire and his latest project, Amazon Prime Video action thriller Tom Clancy’s Jack Ryan.

“What has changed [since The Wire] is now people see they can do more in-depth work and they don’t have to reduce every episode to a beginning, middle and end. So there are more anthology series on television, which lend themselves to more involved and complex storylines. It challenges you as an actor a little bit more,” admits Wendell Pierce, who starred as Detective William ‘Bunk’ Moreland in The Wire and is now playing CIA boss James Greer in Jack Ryan.

“There’s more interesting work being done on television almost every year because the bar is being set higher and higher. Work that you normally got to do on film, you get to do on television. That’s the change, and I’m very proud to have been a part of the wave that changed television.”

Jack Ryan centres on the titular up-and-coming CIA analyst as he is thrust into a dangerous field assignment for the first time. Pierce’s hot-headed Greer teams up with Ryan (John Krasinski) to identify a potential terrorist described as the next Osama Bin Laden.

Pierce says he was drawn to the series by Clancy’s iconic characters – made famous by the author’s books and their numerous film adaptations – plus its great writing and the chance to work alongside Krasinski (The Office, A Quiet Place), Cuse (Lost, Bates Motel) and Roland (Prison Break).

“I also got a chance to work with actors from all around the world, and the material itself lends itself to a multitude of possibilities. So I knew it was going to be interesting and eclectic,” he says. “They were trying to do something original and not just a television version of the books. All of that was appealing to me – and then to do that while travelling around the world and acting with people from around the world, it’s very exciting.”

Pierce was also enticed by the fact all eight episodes of the show were made available to watch in more than 240 countries around the world on the same day as the premiere in LA. “In one moment in time, everyone can see it. That’s pretty amazing,” he enthuses.

Playing a CIA officer was also a new experience for the actor, whose credits also include Suits, Treme and Ray Donovan. But to prepare for the role, he did a lot of research, meeting current and former CIA officers. “They are multi-dimensional and complex people, but they’re ordinary people doing extraordinary things,” he says. “I got to understand how that work affects their personal life because you find out things during the course of the show that affect James Greer’s personal life. They were a great resource.”

The first season of Tom Clancy’s Jack Ryan – season two has already been confirmed – begins with Greer despondent as he faces the end of his career after being bumped down to a desk job. But right at the moment when he thinks his best days are behind him, he’s rejuvenated by Ryan, a young analyst who reminds him of all the reasons he became a CIA officer in the first place.

The opening episode sees Greer and Ryan head to the Middle East to interrogate suspected terrorists, before a massive firefight erupts inside a desert compound. But while there’s plenty of action, Greer says this is finely balanced with quieter moments as the characters and their relationships are explored.

“With the action, it’s not arbitrary sensational acting,” he continues. “Everything is very specific, so the action and thriller part of the investigation are even-handed and you find an element of both in each, so that’s what I like about the way it’s come together.

“I enjoyed the action stuff, being on helicopters and all that. But also doing the research and putting that together, I really enjoyed that part of it too. Then the locations and working with actors from different parts of the world. You don’t realise what we have in common and how expressive and inventive people can be. It puts you on your toes and you appreciate being in the moment because you never know what’s going to happen.”

Among the actors sharing the screen with Pierce is Dina Shihabi, who plays Hanin Suleiman, the wife of the man being hunted by Ryan and Greer. When she first appears, she’s shown with her three kids playing football, before a band of suspicious people turn up at her house. But while not much more is revealed in those initial scenes, it’s clear she will have an integral role in the events that play out during the season.

The series marks Shihabi’s first major television role, and the actor says she was thrilled to be playing a “strong, intelligent, brave woman,” particularly one from an Arab background. “She felt like the women I knew and grew up with, and I don’t see that portrayed in Western TV,” she explains. “Usually when you see Arab women on screen, they’re victimised or aren’t given a voice, so they’re an ‘other’ – they look different, dress different and sound different. So I’m especially proud, as an Arab woman, that that’s what I’m putting out into the world, because I think we need more Arab women on screen who are smart and powerful.”

The actor, who grew up in Dubai and now splits her time between New York and LA, believes unfair portrayals of Arabs on screen “rob” viewers in the West of learning about a culture they might be unfamiliar with. “Then for the Arab world, it’s important to see positive portrayals of them in the Western media. If all you’re seeing is a terrorist, that’s how you feel the rest of the world thinks about you.”

Tom Clancy’s Jack Ryan goes so far as to show the events that motivate Hanin’s husband, Mousa bin Suleiman (Ali Suliman), to wage war against the West. “He believes he’s fighting for his people; he believes he’s protecting his family,” Shihabi says. “Everyone has these deep and strong motivations and they don’t all line up, and that’s a very complex, human, riveting story.”

There is no doubt Mousa bin Suleiman is a bad person, but it’s also important that viewers understand he wasn’t always like that, Shihabi argues. “What this series does is shows you how he becomes that person and it shows you what that person’s family is like. Then you get to spend an extremely intimate amount of time with that person’s wife and you get to know her not just as his wife but as a person in the world. I just find that so powerful, and those are the stories we have to tell.”

The fact Hanin plays a pivotal role in the series was particularly exciting for the actor, who reveals she hardly sleep for two weeks after learning she had won the part. “I was so excited because my character has a complete storyline, I’m a key player in what drives this show,” she adds. “So for a powerful Arab, Muslim woman to be a key player in a huge Amazon TV show called Jack Ryan, that’s badass. That’s so cool, and I hope more characters like this are portrayed on screen. I hope this opens a lot of doors.”