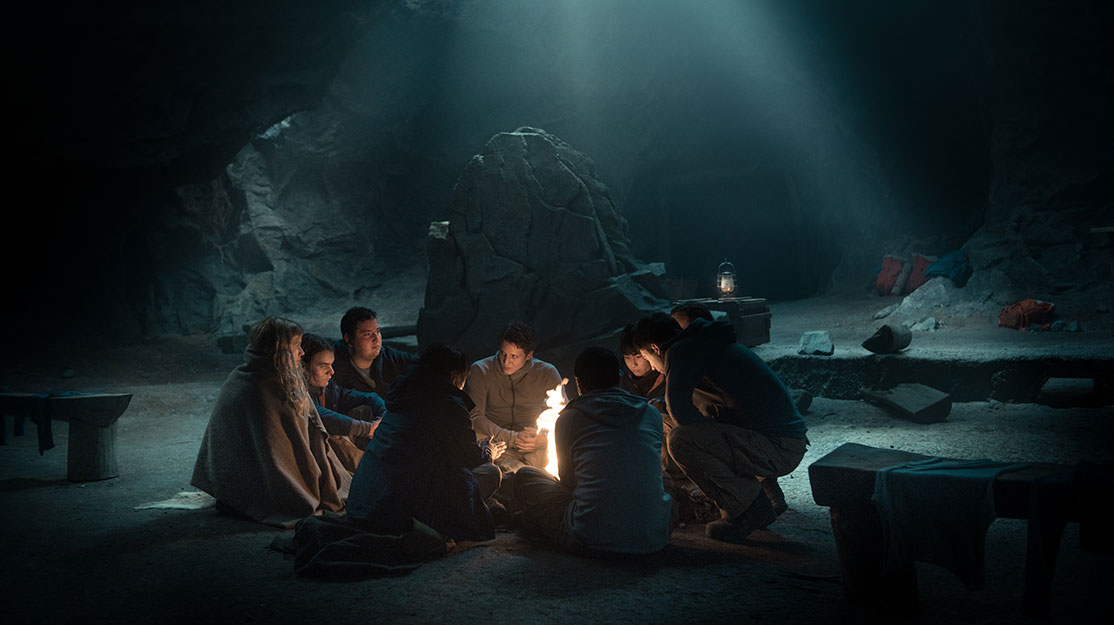 Wild Republic star Emma Drogunova and director Markus Goller share stories of acting boot camps and filming in the Alps for the German drama, in which a group of young offenders escape into the wilderness in the wake of a mysterious death.

After a year of lockdowns, the snow-capped peaks and crystal clear lakes of the Alps have never been more alluring. Yet this beautiful landscape becomes hostile territory for a group of young offenders in eight-part German drama Wild Republic.

Surrounded by nature, the members of this group are all voluntary participants in an experimental education programme designed to rehabilitate them. But when a violent death occurs, their shared negative experiences of authority and the unknown identity of the killer lead them to band together and seek shelter in the mountains from the inclement weather and their pursuers. There, they discover a complex network of caves where they form a new society with their own rules.

As the story progresses and the group become as wild as their environment, each episode includes flashbacks to explore the backgrounds of each character, revealing how they found themselves on the programme and the experiences that have shaped them. Chief among them is Kim, played by Emma Drogunova (In Berlin wächst kein Orangenbaum), who was drawn into a world of prostitution and human trafficking before being given the option to reform or serve her sentence behind bars.

“But she’s not a victim,” Drogunova tells DQ. “I love her a lot. She’s so open, even though she has had so many things to go through. She was still able to be optimistic and love people and give them a second chance. She’s very motherly.

“Every character evolves [through the series] and Kim becomes one of the leaders. She has this energy and regains this trust in herself and others. That’s also something that’s very remarkable about her and something I could connect with. She finds herself more and more during her time with the others.”

Developed by writers Arne Nolting, Jan Martin Scharf and Klaus Wolfertstetter, Wild Republic is co-directed by Markus Goller and Lennart Ruff for German streamer MagentaTV, which launched the series last week after its virtual world premiere at Berlinale in March. The show is Goller’s first TV series after two decades working in cinema.

Working with a large cast meant the Wild Republic was “a huge challenge because you always had to focus on certain characters and others were more in the background but were still important,” Goller says. “It was a huge ensemble. But we had a great time. It was all about communication – we talked a lot about it, we tried to feel different things and check the scenes [to see if] they worked. There was a lot of give and take.”

Moving into TV for the first time marked the realisation of a long-held dream for Goller (Simpel, Alles ist Liebe), who is best known for helming comedy-dramas on the big screen. As someone who also loves to spend time in the mountains, Goller also got the chance to mix work with pleasure while making the series.

Teaming up with Ruff, the directors split duties and worked across two units, with Goller picking up Kim’s flashbacks in episode one and Ruff filming the cave scenes. Together, they employed a character-driven visual style via which the camera becomes more intimate as the story progresses. Before filming began, however, they organised an actors boot camp at a country chalet to help the cast – featuring Merlin Rose, Verena Altenberger, Franz Hartwif, Ulrich Tukur, Rouven Israel, Béla Gábor Lenz and Maria Dragus alongside Drogunova – fully embody their characters.

“We got to know each other around a campfire and tried out the characters, and we did activities where Emma as Kim had to interview Merlin as Ron,” he says. “It was a beautiful way to set all that up. For us as spectators of the whole thing, it was very interesting how every actor had a lot in common with the character. Emma knew Kim, Merlin knew Ron… it was just very interesting and great to get everyone together.”

“I really loved it,” says Drogunova. “It was a very good idea to get to know each other before shooting. We had this little thing where we were in the woods as our characters and Markus and Lennart gave us activities and whispered instructions to us so the others couldn’t hear us. There were so many situations that appeared where we really got to know our characters and also the others. It opened a lot of doors for me as Kim.”

Filming began in February last year in Cologne, where production designer Claus Rudolf Amler created the show’s cave system at MMC Studios, while the city also doubled as the location for the flashback sequences. The Covid-19 pandemic then necessitated a two-month hiatus, after which shooting continued in the South Tyrolean Alps as the cast and crew battled against their natural surroundings and newly imposed health and safety restrictions.

“While we were shooting in the cave, it was built in a studio so it was normal day-to-day work. You could go there, do your job and go home,” says Drogunova. “But when you’re in the mountains, you don’t have that routine. You always have to adapt to everything that is around you, and that can be both very good and very exhausting sometimes. We might plan to do a scene but maybe we can’t do it because of the weather, or there is a huge storm in the middle of our location so we have to go somewhere else. But I loved that it was so unpredictable.”

For the majority of the shoot, the outside settings and the size of the cave structure meant the production could proceed largely as “normal,” but during the last 10 days of the shoot at the end of November, the demands of dealing with Covid began to make themselves known.

“That was really the first time we had to wear masks and have zones,” Goller says. “In the cave, it was strict but it was easy; there was no problem. Fortunately, we had a big team shooting for nine months and nobody got it. But Covid also gave us more time to work on the scripts and work with the lovely actors. A lot of what’s in there, especially dialogue, came out of rehearsals.”

The weather also impacted filming on the series, as earlier-than-expected snowfall last October meant 15 locations were suddenly out of bounds, forcing the crew to reschedule the production, which is led by Lailaps Pictures and X Films Creative Pool in coproduction with Handwritten Pictures. Beta Film distributes the drama, with the series also due to air on Franco-German network Arte and Germany’s ARD in 2022.

The story of Wild Republic might draw comparisons to the plot of classic novel Lord of the Flies, with a group of strangers coming together to rule themselves in an inhospitable location. But viewers will also get to see more of the characters’ human side, rather than just their criminality that leads them to take part in the rehabilitation programme in the first place.

“We see where they come from, what they used to do and how they used to live. Then suddenly they’re thrown into something completely different,” Goller says. “Right now everyone has been thrown into something completely different [during the pandemic]. You have to get to know yourself, find out who you are, what’s important within you, and some are criminals and some are not. Emma’s character, she’s the leader of the show and she develops what she doesn’t have in the first episode – which is any self-worth to be able to stand up for herself.”

The mixture of characters, from an Instagram influencer and an outsider to one with political aspirations, also means viewers will find intrigue in the varying perspectives shown through the show.

“The series asks questions that are very contemporary, but it doesn’t always give the answers,” says Drogunova. “It asks you what kind of society do you really want to live in? How do we get there and what kind of fundamental rights do you want to give people? All those different questions, they are so political because that’s what we are all thinking about right now.”