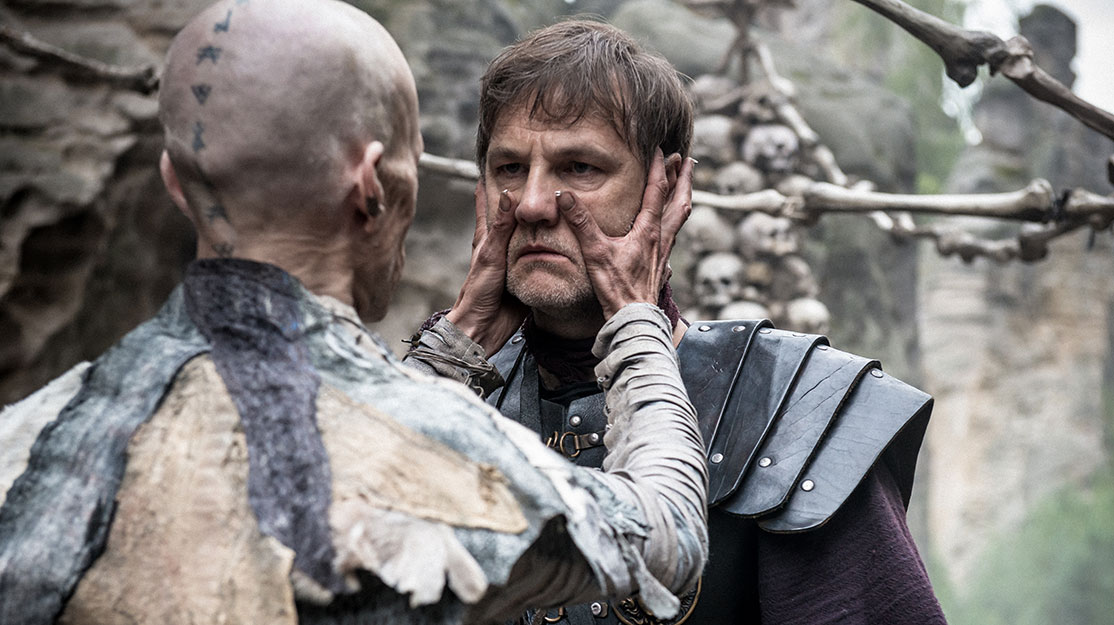 It’s been 10 years since HBO’s classic Rome (and four since Starz’s Spartacus), but the satcaster looks to be taking advantage of a renewed interest in classical history on TV, with Britannia set to debut in January 2018.

Kudos (Sky Atlantic’s The Tunnel) is also developing a take on Robert Harris’s Cicero trilogy, with the possibly of a long-rumoured reboot of Robert Graves classic I Claudius coming from Bad Wolf (His Dark Materials).

Bad Wolf’s Jane Tranter was, of course, responsible  for overseeing Rome for HBO and the BBC alongside Anne Thomopoulos

And while it isn’t set in the same era, BBC1’s upcoming £8.5m (US$11.3m)-per-episode show Troy: Fall of a City certainly shares some of the appeal of these ‘sword & sandal’ drama series.

The success of Game of Thrones, with its dynastic bloodletting, treachery, hedonism and epic battles, has probably helped spark an increase in curiosity about Ancient Rome, while HBO’s 2005-07 series was felt by industry insiders to have been something of a dry run for Thrones itself, brought to grief by budgetary issues.

More recently, two cinema releases used the Roman occupation of Britain south of the Antonine Wall and the disappearance of the Ninth Legion as subject matter – 2010’s Centurion (directed by regular Thrones helmer Neil Marshall), which coincidentally starred Britannia’s David Morrissey (The Walking Dead) as a veteran legionary, and the following year’s The Eagle with a cast led by Channing Tatum and Jamie Bell.

Britannia scribe Jez Butterworth has also previously tried his hand at the Roman era, co-writing 2007’s The Last Legion with his brother Tom. The film was set in the dying days of the Western Empire and starred Colin Firth, Ben Kingsley and Rome’s Kevin McKidd.

For Britannia, Butterworth has once again partnered with his brother Tom and James Richardson to create a story set in AD43 that follows the Roman army as it returns to conquer the land held by warrior women and powerful Druids who claim to channel the forces of the underworld.

Kelly Reilly (True Detective) plays Kerra, daughter of the King of the Cantii, who is forced to put her differences with arch-rival Queen Antedia (Zoe Wanamaker) aside to face their invaders. The Romans, led by General Aulus Plautius (Morrissey), are determined to succeed where Julius Caesar failed and conquer this mythical land at the far edge of the Roman Empire.

As tribes and Druids, led by Mackenzie Crook’s Veran, unite to fight the Romans, Kerra is thrust into the most important role of her life as she spearheads the resistance against the might of the Roman army.

The show is produced by Vertigo Films and Neal Street Productions and distributed by Sky Vision. It will also air on Sky Atlantic in Ireland, Germany and Italy, while Amazon Prime holds the US rights.

Asked if there were any particular influences that led to the commissioning of Britannia, Roach says: “The fact that period drama in the shape of Penny Dreadful worked for Sky Atlantic led us to look at something similarly experiential, with Britannia offering a truly original experience – one that doesn’t ape other shows.”

Mensah is also keen to emphasise the “visceral” nature of Britannia: “It combines epic scale with a human, personal level – some of the communal pagan rites that the Britons and Druids go through bear comparison to modern-day festivals such as Burning Man.”

Mensah is confident the show’s presumably hefty budget will all be up on the screen for viewers to see. With more than 200 people working on the production and reconstructions of Stonehenge and the Celtic underworld (which included animating hundreds of life-size skeletons and disembodied skulls), Britannia doesn’t aim to stint on arresting visuals.

Flashes of unexpected Burning Man-type modernity will apparently not be reflected in the show’s dialogue, which Mensah and Roach assure will stay true to Butterworth’s “unique voice,” rather than attempt a cod-Classical or a slangy contemporary style.

Although Butterworth did not consciously base Britannia on any specific contemporary account of the Roman invasion of Britain (the third after Julius Caesar’s two abortive attempts a century earlier), he did consult with historian Jonathan Stamp – a BBC History producer and a consultant for HBO’s Rome – to ensure the look and veracity of the series was generally accurate.

In terms of casting, Mensah and Roach stress how happy they to secure such familiar and audience-friendly names as Morrissey, Reilly, Wanamaker, Crook (The Office), Ian McDiarmid (Star Wars) and Julian Rhind-Tutt (Green Wing), with fresh faces including The Enfield Haunting’s breakout star Eleanor Worthington Cox.

The visual style of Britannia is also going to be a change from some of the bleakness and windswept vistas seen in similar genre pieces such as the aforementioned Centurion, with Roach promising “a look to the show that really hasn’t been seen before, with lush primary colours and a vibrancy not usually associated with period drama.”

Both Roach and Mensah stress that amid the carnage of the invasion, Britannia will not be without humour, and that the Romans, although understandably the antagonists in the series, will possess shades of grey, as will the native Britons and the Druids.

“Complex characters and believable motivations” are key, according to Mensah, hence Britannia’s presence on Sky Atlantic – which, according to Sky Entertainment director of programmes Zai Bennett, is primarily the home of “heavily serialised, smart, grown-up storytelling,” in contrast to Sky1, where series such as Stan Lee’s Lucky Man have “really clear heroes and villains.”

And while Mensah and Roach are wary of comparisons with Game of Thrones, they are upbeat on the prospect of Britannia extending beyond season one, with story arcs mapped out at least to a possible third season.

In Mensah’s words: “The ambition is to be big.”

With speculation rife that Thrones’ eighth and final season will not appear until 2019 and the attendant spin-offs in the following years, Britannia may have the potential to provide Sky with a homegrown show appealing to a similar audience, which could score a swift season two pick-up (as have Tin Star for Sky Atlantic and Jamestown for Sky1), echoing the success of Vikings for History.