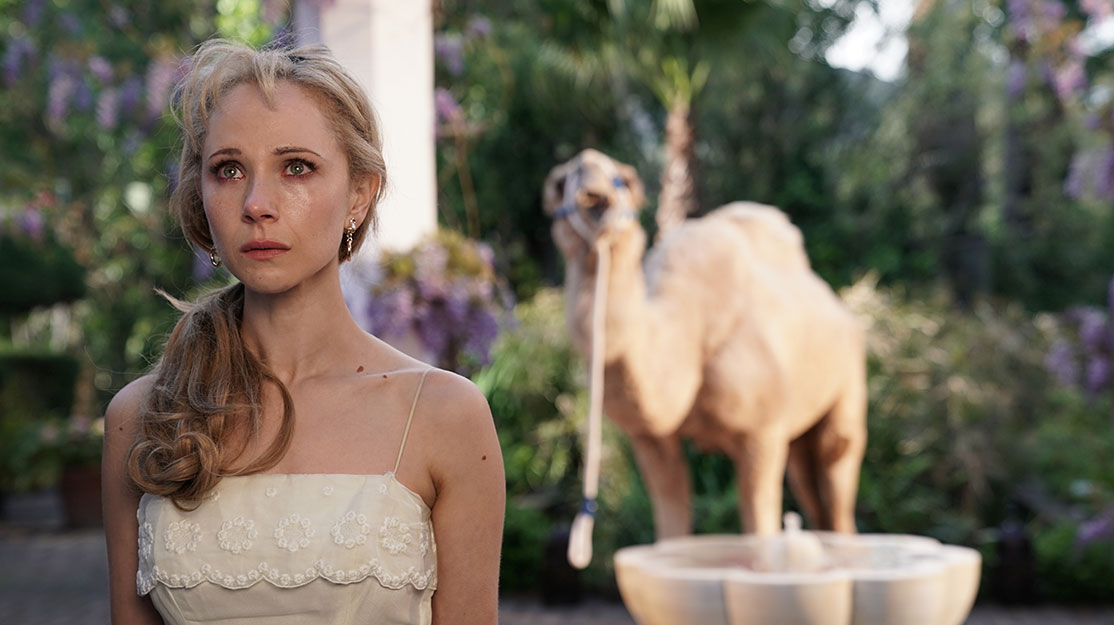 If the goal of a television drama is to submerge its audience in an enticing new world, Little Birds looks set to leave viewers drowning in the dizzying array of colours, music and clothing that makes up 1950s Tangier, a place of intrigue and mystery that attracts people from all over the world.

One of the last outposts of colonial decadence, the Moroccan landscape could prove to be as much as a culture shock for those watching as it is for Lucy Savage, a troubled American heiress who lands in this international melting pot.

It’s here that Lucy must navigate the sexual, personal and political tensions of the town, all while longing for a less conventional life free from the societal cage in which she has been raised. Her fiancé, aristocratic English lord Hugo Cavendish-Smyth, is torn between his duty to Lucy and his lover Adham Abaza, the most eligible man in Tangier.

Against a backdrop of hedonism, Lucy and Cherifa struggle to find their independence in a country looking to break free from its past. Their lives reveal private desires and public politics in a period drama that carries distinctly modern themes of freedom and feminism.

“Lucy’s got an incredibly powerful father who is very much in control of her life in New York, and she’s also a young woman who has a massive hunger within her for things bigger than women were allowed in the 1950s, which has meant she’s been institutionalised in her younger years,” explains Juno Temple (Dirty John), who plays the young heiress.

“When we meet her, she’s about to move to Tangier to start her dream life, where she’s going to marry a handsome English lord. But she arrives in Tangier and it is more vivid, luscious, sexual and alive than anything she could ever have imagined.

“She really falls down the rabbit hole and things start to get pretty bonkers. She meets Cherifa and they have this incredible connection. Throughout the rest of the journey, they have these palpable and important moments that truly change their lives forever. Really, it’s about two women who help each other be the best versions of themselves they can be. So there’s this wonderful and protective yet inquisitive and also inspiring relationship between Lucy and Cherifa that is really exciting and I haven’t seen before. Hopefully, we bring that to life beautifully.”

Meanwhile, the story begins with Hugo in a relationship with Adham as he is about to marry Lucy. “You think that’s most of his troubles, but it’s not,” jokes Hugh Skinner (Fleabag), who stars as Hugo. “There’s growing political unrest in Tangier as it moves towards independence, and Hugo unwittingly gets involved in an arms deal via his father-in-law.”

The actors are among a multinational cast that populates the six-part series, with co-stars including French actors Raphael Acloque (Adham) and Jean-Marc Barr (Pierre). The ensemble are full of praise for director Stacie Passon (The Affair, House of Cards) for creating an atmosphere that was as vibrant as the sets they were filming on. “She is so brilliant because she has this childish quality where she just wants to try everything, see everything, taste everything, know everything,” says Temple. “When your director is like that, you are so filled with joy coming to work every day because you try everything. What doesn’t work, you try again; and what does work, you get so excited for and you celebrate.

“You would walk from the make-up trailer into this room that you never wanted to leave. It was dripping neon colours and it felt like a world that would kill you if you didn’t leave it, but one you never wanted to leave. It was also a safe space to let our freak flags fly, and Stacie encouraged that. She’s a brilliant, brave and truly extraordinary director I would do anything for.”

Exec producers Ruth McCance and Peter Carlton, from Warp Films (The Last Panthers), are similarly effusive about Passon. “We kept trying to give her more time to do things but she wanted to meet the schedule so she was fantastic at driving things and keeping the energy high on set,” says McCance. “The show is so strange and seductive. We were all giving it so much, so there was a real will within the crew. It was quite humbling.”

“What Stacie’s got is the confidence to be open, to say when she doesn’t know and to receive other ideas. But because she’s confident, she will know whether it’s right for the show,” Carlton continues. “What was amazing was you got this openness and very light feeling on set because people felt really trusted and felt they were in very safe hands. It’s that wonderful thing of artistic freedom without indulgence. Everybody rose to that. People really followed her.”

“It felt like trying to [set] Anaïs Nin now would be quite weird because it is period, so that’s why the series started as period. Her stories felt like they needed to stay there,” Carlton explains. “That great idea to be in Tangier in the 50s gave us somewhere where everything was shifting, which felt very contemporary, looking at gender identity and racial identity, power and sex, and it was, ‘Bingo, we’ve got something that could be sci-fi, although it’s technically in the past.’ It’s not Downton Abbey.”

Broadcaster Sky and distributor ITV Studios Global Entertainment backed the series throughout its changing development, with the project becoming “weirder and more bonkers” as it went on, according to McCance. The production was even paused for seven months while they waited for the “incredible” Temple to become available.

“It’s a melodrama and it’s period, but Warp isn’t really in the business of [traditional] period drama and Sky didn’t want a period drama either,” she says. “So we weren’t looking for someone who looked good in bonnets, necessarily. [Temple] just has this contemporary, fresh vibe and people get the idea of the show being a bit more rock ‘n’ roll when you mention she’s the lead. She brings an identity to it that we thought was really fresh. That’s why we wanted her.”

The show’s story and “technicolour” production design also helped the actors to understand their characters, the Warp exec continues. “It’s almost a little bit comic book, in that it’s heightened and it has big ambition and big emotions, but it all feels true at the same time. We were in pursuit of emotional truth more than anything. The look is very distinctive but it’s not about verisimilitude. It’s not English Patient-levels of recreating the world. The stylisation is very much built in; it was part of the original conception, so the performances had to be honest.”

The stylised production was inspired by 1950s melodramas of the kind directed by Douglas Sirk and Rainer Werner Fassbender. Exterior scenes for Morocco were filmed over six weeks in Tarifa, Spain, before the production completed interiors at Space Studios in Manchester, England. Unusually, however, director of photography Ed Rutherfood and production designer Anna Pritchard started out working on their designs for interior scenes that would be filmed in a studio, before then matching them to locations that could be dressed in Tarifa. In most cases, studio sets are built to match exteriors.

McCance says the approach was down to “necessity being the mother of invention,” adding: “Anna and Ed brought so much to it and worked brilliantly with Stacie to realise this mad world. With our costume designer Jo Thompson and make-up designer Jacqueta Levon, they were all on the same page.”

“It’s like having a jazz band,” Carlton says. “Everybody knows the basic melody and everyone’s doing their own thing but making sure it complements the other. That creates an incredibly strong identity for the whole, even though what each person is doing is quite individualistic and has a strong flavour.”

Filming in the coastal town of Tarifa wasn’t a stroll on the beach, however, with the crew soon discovering why it is known as the windsurfing capital of the world. “Sometimes you would be bent at 45 degrees and you couldn’t walk forward,” Carlton says of the challenging shooting conditions. “Anna would have dressed a set and you’d come in the next morning and nothing would be there because it had all blown away in the night. It is one of the windiest places in the world. It was like filming in a wind tunnel. After five weeks, it drives you mad.”

Before Little Birds debuts on Sky Atlantic on Tuesday, thoughts have already turned to what a second season may look like and whether it would continue the stories of Lucy and Cherifa or pick up a new band of characters in another glamorous world.

“Having delved into it, there’s so much richness,” Carlton says. “With some of these characters, you want to see what happens to them a few years later and you’d want to see another situation that was similarly glamorous and similarly turbulent with a new story in a slightly new era. That’s something we’re really interested in. It feels like there’s more to tell in that Nin-inspired world.”

“We’re all suckers for melodrama,” adds McCance. “We want audiences to have a good time and think, ‘Is this the best way to live?’ which we think is a very contemporary question. It’s very much why this resonates.”