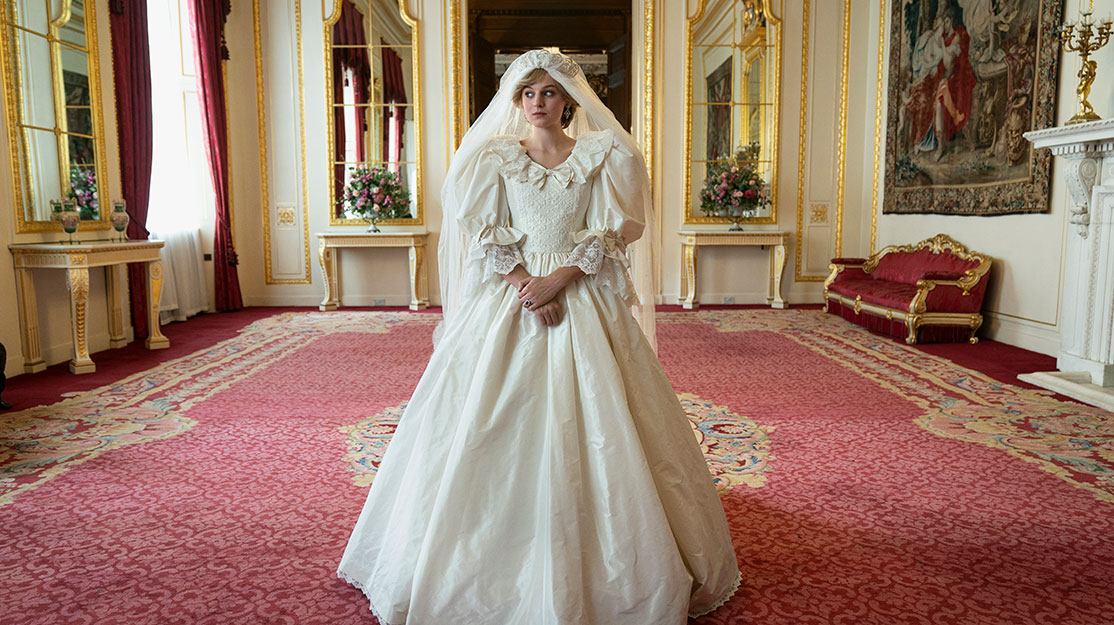 Director Benjamin Caron, hair and make-up designer Cate Hall and production designer Martin Childs break down their work on The Crown episode Fairytale, which sees Diana move into Buckingham Palace only to find her life filled with loneliness.

After accepting Prince Charles’ marriage proposal and driving to her Earls Court flat to the sound of Diana Ross song Upside Down, only to be greeted by a waiting rabble of journalists and photographers, Diana Spencer can be sure her life will never be the same again.

But as events unfold in Fairytale, the third episode in the fourth season of Netflix drama The Crown, life among the royal family at Buckingham Palace doesn’t match up to the early excitement Diana felt while sitting in the back of a taxi with her screaming flatmates as they drove past the most famous residence in London.

Come moving day, she soon finds herself isolated in a grand apartment and unsure of royal protocol as Charles departs for an overseas engagement, leaving her to roller-skate alone through the halls of the palace.

“It was a very light script, actually. It was one of our shortest scripts we have had to date,” remembers episode director Benjamin Caron, speaking at a Royal Television Society event that dissected the episode earlier this month.

“It was just over 30 pages, which was, I guess, an invitation by Peter [Morgan, the series creator and writer] to allow me and the rest of our amazing team to give a little bit of space to this episode. My approach to all of the episodes of The Crown I’ve made so far is always in emotional terms. For me, it’s about the characters that matter, the emotions that matter. That’s what I believe and that’s what our audiences relate to.

“We think we all know Diana’s story, but I always ask that question, ‘What must it have been like for any person going through that experience?’ Across the season, we’ll see that remarkable strength of character, power and resilience she possesses grow. She had to rise above it all.”

The episode begins joyfully enough, with free-spirited Diana – played by Golden Globe winner Emma Corrin – sweeping into the magnificent rooms of the palace. But the clash between her and the stuffy formality of the royal family is soon shown in sharp focus.

Hair and make-up designer Cate Hall, who joined The Crown for season three, says she was able to “learn loads” before taking on the looks of S4’s two key additions – Diana and UK prime minister Margaret Thatcher, played by Gillian Anderson (The Fall, The X-Files).

“The 80s was my childhood so it felt really special, and by then I was a bit more confident in the process and a bit more at ease with it,” she says. “Emma is incredible casting, so we went into season four knowing that we had Gillian and Emma. It didn’t feel like a tough sell, we didn’t feel stressed at all about it because Emma was so believable even without the wig, without anything. She was already 70% there, to be honest.”

With each season of The Crown spanning roughly 10 years, the creative team had to plot Diana’s journey from adolescence to adulthood and “manufactured media icon” across S4’s 10 episodes.

“Fairytale is really interesting because it’s a real springboard into that journey,” Hall says of the episode. “She’s full of hope; she’s full of adolescent excitement at the beginning. But actually, by the end of the episode, she knows and we know it can’t end well, and it sets up the tragedy of the whole season. We had to treat that quite lightly, because we had to tell almost that whole story within the one episode so that, by the end, you had a flavour of what was to come in terms of her being far more manufactured and almost like a little girl dressing up and trying to play the part, with layers of authenticity and layers of just feeling slightly off and a bit uncomfortable.”

Hall combs through thousands of images to create a visual, chronological bible for each character in The Crown, so she and her team can track how their appearance changes through the key events dramatised in the series.

“We don’t necessarily take that literally, but we like to be informed by all of that information,” she notes. “ The process is the same for all the characters, which is that we start by trying to get a shape. If we can get a very convincing silhouette using a wig so that if you squint or if they’re facing the other direction, it could be them, then I’m happy because I feel like, beyond that, the performance does everything.”

Hall’s work with Corrin involved wig fittings several times a week, but she says the then-relatively unknown actor was extremely relaxed and “very cool” about playing Diana, who is still one of the most recognisable women in the world.

Casting Diana “was certainly no easy task until we met Emma, and very Diana-like she walked into the room and just instantly caught everyone’s attention,” Caron says. “We all knew we had this extraordinary actor who was able to really get inside the character of Diana and understood her. She had this strength, this incredible vulnerability, which is a really hard thing to play without being clichéd. Emma had this genuine empathy towards her and she understood her as a person, and that shows in her performance.”

Cumulatively, Fairytale is the 33rd episode of The Crown, but it still contains a series first in that the exterior of the block of flats shown to be where Diana lives was the residence of the real-life princess. “It’s the only time we’ve ever played it real,” says production designer Martin Childs.

Otherwise, everything else is a mixture of locations standing in for other places and studio-built sets. Buckingham Palace, Childs says, is a blend of four sets at Elstree Studios and 11 locations, so part of his job is to make sure everything looks like it could be in one very large house.

“All of the bits you have to necessarily invent, like the private apartments, must feel real and they must feel like they belong to all the bits we’re more familiar with,” he says. In fact, one of the first things Childs did when he joined The Crown back in season one was to go “undercover” on a tour of the real Buckingham Palace.

“I went through all of these rooms and I thought, ‘How on earth are we going to distinguish all of these from one another?’ In a sense, using that many houses was helpful to me because all of those rooms could then look different,” he says. “But if you walk through Buckingham Palace, there’s not a lot of distinction between all of the rooms. In the end, I thought, ‘I’m really pleased they’re not giving us permission to shoot here because we’re going to have difficulty making this look great.’”

On his tour, Childs was also inspired by the way the upstairs apartments at the palace were built in an enfilade – a row of rooms linked together by connecting doors.

“As I knew that about the private apartments and the Queen’s bedroom and dressing room and Philip’s bedroom, I had an architectural metaphor for an extraordinary marriage because it meant they could close doors on one another so there would be distance between them, and then there’s also closeness when you wanted it,” he explains.

As for the apartment Diana moves into, Childs wanted it to look like a place viewers had never seen before. “I have a theory that they only dusted it the week before she got there and, for decades in the past, it had belonged to other future brides-to-be,” Childs says. “That was my brief to myself and the set decorator – they dusted it down just for her, which is why it’s cold and unwelcoming.”

It’s inside the palace where one of the episode’s key moments takes place, as Diana performs a dance sequence on her own. According to Caron, that scene was never actually scripted, it was just a story beat where Diana would be having a ballet lesson. But the director was more interested in seeing Diana alone before breaking out into dance, as Elton John’s Song for Guy plays over the top before transitioning into Martin Phipps’ score.

“It’s an expression of her character, of her personality, of her trying to push against the walls of the palace,” Caron says. “She’s alone in there, trying to find a kind of freedom as she loses herself in dance, in movement, in music.

“When we were filming it, I cleared everyone out and Emma and I talked about possibly choreographing that scene. And we both felt that, actually, it was better that it was just freeform. I always talk about a relationship with actors, about giving them permission to fail, about allowing them to take themselves into a space where they’re forgetting themselves and allowing themselves to go further than they might do without the constraints of being judged or being watched.”

With just Caron and the camera with her, Corrin danced while listening to Cher’s I Believe, which they knew would be replaced in the final edit. “But it was something she felt she could throw herself around the room to,” the director continues. “I use commercial music as an expression of Diana and her personality. But then I always use the score as this representative of the crown, of duty, and it always comes crashing in over the top and eventually slightly dampens that spirit. That was a scene I feel really evokes all those feelings, but it was striking and it was amazing. Just to see her alone in that huge, vast room is really moving.”

Another standout scene sees Charles (Josh O’Connor) and Diana meet the press for the first time after announcing their engagement, with viewers watching from the perspective of the numerous cameras pointing at the couple. Caron was inspired by an old image of cameras on tripods trained on Buckingham Palace and wanted to evoke the feeling that the world was watching.

The challenge for the director, however, was recreating a scene that actually happened in real life. “We don’t do it very often where we are recreating real-life moments, because it’s just not what we do,” he says. “It feels like you’re setting yourself up for a fall if you do that. However, that moment is really significant for us.

“Josh and Emma did watch it and they were faithful to the representation of what both of those people were doing in that moment. But I was more interested in us, the viewer, the people around the world who were leaning into what these two were saying. So we focus on the camera, we use a zoom to just drift across from Charles to Diana and back. We even played with the textures on the screen so you felt like you were inside the camera watching this moment and the significance of this moment. There’s this very subtle high-pitched score that plays underneath it that adds to that uneasiness.”