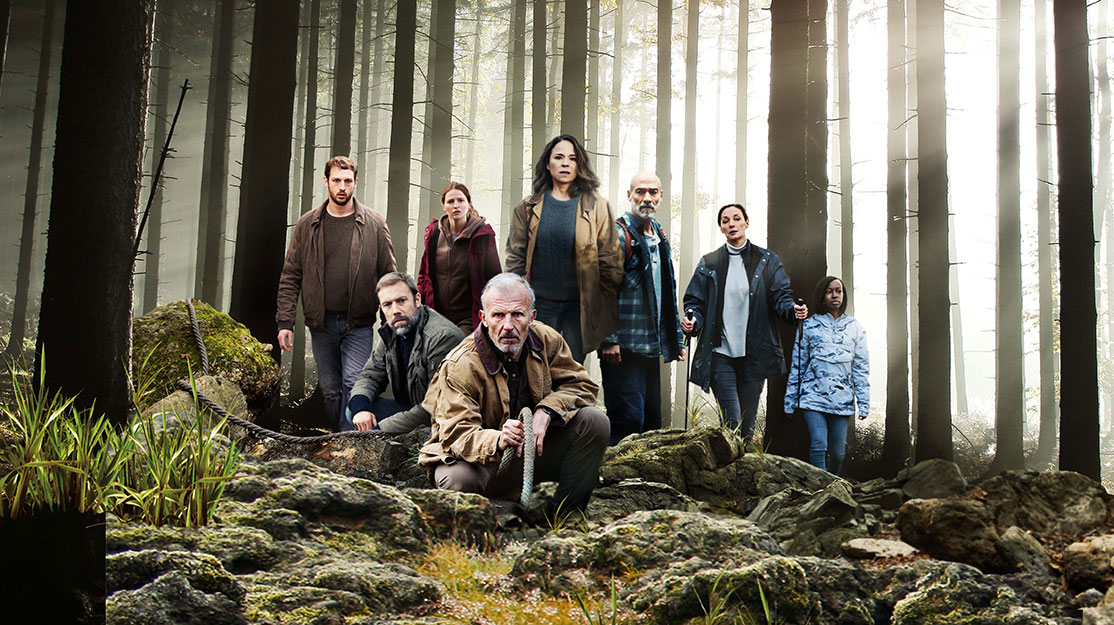 Co-creators Dominique Rocher and Eric Forestier discuss their eagerly anticipated three-part drama La Corde (The Rope) and why TV is better in the cinema.

Three-part French-language drama La Corde (The Rope) was in illustrious company when it was screened last year as part of the London Film Festival (LFF)’s inaugural programme of events focusing on series.

Premiering alongside the first two episodes of the third season of HBO’s Succession, The Rope had audiences riveted with its story of a team of scientists who discover a mysterious and seemingly endless rope in the middle of a Norwegian forest.

As the team’s curiosity gives way to obsession, the rope begins to exert a disturbing influence, with dramatic consequences. Produced for European broadcaster Arte by Les Films de l’Instant and Versus Production and distributed by France’s Wild Bunch TV, the suspenseful miniseries premieres in France tomorrow.

Co-creators and screenwriters Eric Forestier and Dominique Rocher, who also direct the miniseries, were inspired by German author Stefan aus dem Siepen’s novel Das Seil, taking the premise and key themes from the 2014 book but making wholesale changes for its small-screen adaptation.

By swapping farmers in a remote village in Germany for a forest in Norway where a group of scientists are tantalising close to complete their work at an astronomy observatory, Forestier and Rocher modernised the story and added diversity to the initial premise of 12 male farmers trying to solve the mystery of the rope.

“The book obviously has qualities, but it could be fresher regarding what the men and women do. It handles the characters in a very binary way. The men are the ones following the rope and the women stay at the village. We wanted to mix the characters a little bit to make it more modern and tackle some more pressing issues,” says Forestier.

Instead, in the miniseries, a group of men and women, some young, some older, from different European countries, head out in pursuit of the end of the rope, while others stay at base to continue a scientific experiment that’s been 15 years in the making.

Parallel to the plotline involving the rope is the progress of the team of international scientists as they strive to complete their important work. At the heart of the series are philosophical questions around progress, our insatiable thirst for knowledge and where we are heading as a civilisation.

Clément’s character, scientist Agnès Mueller, is blind, and there is a strong case that a blind or visually impaired actor should have been cast in her role. Wild Bunch TV declined to answer DQ’s enquiry about whether efforts were made to do this.

Meanwhile, the decision to cast actors from different European countries was made to highlight the importance of collaboration across the continent, although the co-creators were also wary of focusing too much on the international elements of the miniseries.

“The smaller the story, the more specific you can get. You can talk to everybody in the world if you tell a story that is very grounded,” says Rocher. And what could be more universal than the mystery of a seemingly infinite piece of rope?

There will be no follow-up to the miniseries, the co-creators confirm, and they hope the three-parter will offer respite to viewers fatigued by multi-season series, or supposedly “limited” series that return if the ratings are strong enough. Moreover, they believe the format would have been very different if The Rope hadn’t been made with Arte.

“It would never have been made in this format for a big streaming platform,” argues Forestier. “Netflix, Amazon or Apple are all trying to hook the viewers and keep them tuned in, so a three-parter is probably not that interesting in that respect.”

It may, however, find another life as a scripted format, after the show was presented at Series Mania in Lille last year as part of a session focusing on projects from France that are ripe for international adaptation.

Both Rocher and Forestier are intrigued by the idea of remakes of The Rope, with the latter saying: “It’s like classical music – you like to hear different interpretations of the same piece, so why not?”

Of course, there is every chance the miniseries could be enjoyed by millions around the world in its original form, should it manage to catch the imagination of viewers in the same why hits such as Call My Agent or Squid Game have via streaming.

“It’s great that international content is getting big audiences. It means we can deal with pretty much any theme and if it is specific enough, you find you’re able to communicate with people on the other side of the world. That’s pretty cool,” says Forestier.

Also cool is the fact audiences seem to still be embracing dark dramas with cutting social themes, which is something of a speciality for Rocher and Forestier, who separately have worked on a variety of wonderfully wicked shorts and films.

Rocher, who directed the 2018 French zombie movie The Night Eats the World – one of a handful of recent horror movies recommended by author Stephen King – says it’s a relief to see that audiences’ viewing preferences haven’t been watered down by the pandemic.

“People said, ‘We want something bright to relieve us from the darkness of the world.’ But Squid Game is very dark and very violent. I found that interesting. Maybe we need some catharsis? Something that helps us deal with the violence of the world,” says Rocher.

“We can provide that, definitely. Look no further than us if you want some darkness and violence,” laughs Forestier.

Having got their big breaks on the big screen, the pair are clearly energised by the array of commissioning opportunities there are for series and miniseries from broadcasters and platforms these days. But they also see it as something of a double-edged sword, both in terms of the potential impact on cinema and quality control.

“If you want to get something made now and you have an interesting and fresh concept, you’ll probably find a place to show it. That’s a good thing as it makes us freer and gives us more opportunities to get creative,” says Forestier.

“But on the other hand, there are so many series being produced right now that it’s getting hard to navigate and know where the good stuff is,” adds Rocher.

Forestier agrees that the competition is fierce but is optimistic that la crème will rise to the top.

“As an audience, you’re being constantly solicited. It can be hard to choose from so many high-end shows. We can have two takes on it. As with any ecosystem, it could push people to get better and more imaginative and creative. But you have the downside to it, which is you must feed the tube and that can lead you to do just that, which is not so interesting. In the end I still believe audiences will pick them apart. The better shows will survive this flood of content and the others will be forgotten,” argues Forestier.

Circling back to the screening of The Rope at the LFF in the autumn of 2021, the pair say the experience of watching TV in the cinema can help elevate a piece of work.

But Rocher believes the pandemic’s impact on the amount of entertainment we consume at home has meant audiences risk forgetting how incredible it can feel to watch something communally.

“The experience of an audience watching together, we are forgetting that right now as people are more and more watching in their homes. But when an audience gasps all at the same time, it’s special,” says Rocher.

One episode of The Rope contains an unforgettable example of such a moment. Along with the uproarious reaction to the new episodes of Succession during the LFF, it’s easy to see why some might consider swapping their living room for the cinema to get more of a communal experience around their favourite shows. So could TV save cinema?

“I believe it could be the beginning of the answer of what we are going to look forward to in movie theatres,” says Rocher.