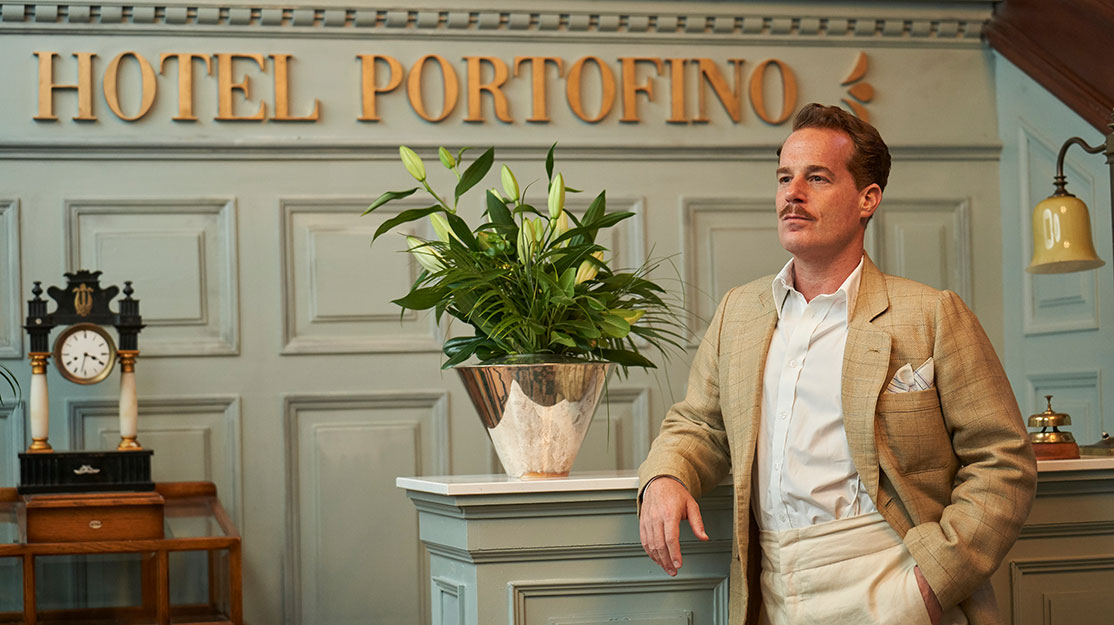 Room with a view

Matt Baker, the writer of BritBox series Hotel Portofino, tells DQ about the inspiration behind this picturesque period drama set on the Italian Riviera and discusses the value of remaking European dramas.

Less than three years ago, the team behind international streaming service Walter Presents unveiled Eagle Eye Drama, a company with a mission to produce English-language dramas inspired by hit non-English-language series from around the world.

Since its launch at the end of 2019, Eagle Eye has achieved its goal with two shows: a UK remake of Belgian detective series Professor T for ITV and a British spin on Swedish thriller Before We Die for Channel 4. It is currently working on a second season of Professor T, while post-production is continuing on another C4 series, Suspect, which is based on Denmark’s Forhøret.

The writer behind all three adaptations is Matt Baker, a former journalist who worked in communications for ViacomCBS before using Covid-19 lockdowns to make a career change and focus on his love of writing.

Baker has now created and written Eagle Eye’s first original series, Hotel Portofino, which follows the fortunes of a British family who open a hotel for upper-class travellers on the picturesque Italian Riviera during the Roaring 20s.

Natascha McElhone stars as Bella Ainsworth, the daughter of a wealthy industrialist who moves to Italy in 1926 to set up a quintessentially British hotel in the town of Portofino. Mark Umbers plays her caddish husband Cecil, while their son Lucian (Oliver Dench) and widowed daughter Alice (Olivia Morris) are still searching for happiness in the wake of the First World War. Guests at the hotel include the imperious Lady Latchmore (Anna Chancellor), while corrupt local politician Signor Danioni (Pasquale Esposito) threatens to drag Bella into the political storm swirling within Mussolini’s Italy.

“It started out very much as a relationship drama, and because I’ve been writing crime stuff, there is an Agatha Christie-style crime element that threads through the plot,” Baker tells DQ. “The core story is a family saga with an emerging love triangle in the middle of it, but running through that is a light-touch ‘crime’ that emerges and then resolves itself. The trick I’m trying to pull off is to thread these storylines together as seamlessly as possible.”

The writer jokes that Hotel Portofino’s crime element leaked into the story “by stealth,” as he was simultaneously writing Professor T. But developing the drama at a time when the UK was in its second national lockdown, in autumn 2020, his ambition was always to create a series that was sunny, escapist, fun, glamorous and entertaining.

“I don’t want to make any exaggerated claims about underlying meaning, but there are some interesting parallels between the 2020s and the 1920s in the sense there’s been this big shock to the established order of things,” he continues. “In the case of the 20s, it was the First World War and this terrible self-inflicted wound on the world order, and I feel there are quite strong parallels with the world we’re living in today after the financial shock in the 2000s.

“I set out to write something fun and exciting but I also wanted something people could see their own experience in and the world we currently see around us. There’s not much point writing stories if they don’t reflect something of the world we can see.”

The idea for Hotel Portofino emerged from Baker’s fondness for Italy and the period in which the show is set. He developed ideas for characters and scenarios that he then took to Eagle Eye execs Walter Iuzzolino and Jo McGrath, Baker’s wife, and the trio worked together to shape the outline of the series and how it might best appeal to audiences around the world.

Filmed in Italy and Croatia, the show debuts on BritBox UK on January 27 and has already been picked up by broadcasters including Foxtel in Australia, PBS in the US and Sky Italia, following deals with distributor Beta Film. ITV will have a second window in the UK in 2023.

“There was an understanding between all of us that period drama is something the international market looks to the British market to do really well. We knew that was an opportunity,” Baker says. “When I’m writing, I’m not thinking, ‘Will this sell in Croatia?’ You’re thinking, ‘Is this good drama?’ But from a writer’s point of view, it’s always helpful to have a commercial perspective of who the buyer might be and what they might want. That was the sort of expertise that Jo and Walter can feed into the process as I’m developing and writing it.

“The thing about Hotel Portofino is it’s unashamedly a piece of entertainment. It’s sunny, escapist entertainment, and if you’re writing entertainment, you want it to reach an audience because that’s what defines it and brings it to life.”

While the upstairs-downstairs portrayal of the Ainsworth family and the hotel staff will draw comparisons to shows like Downton Abbey, or its hotel setting to Danish period drama Badehotellet, Baker says he has never seen either show and instead found inspiration in series like the BBC’s 1976 title The Duchess of Duke Street, about a woman who works her way up from servant to proprietor of a hotel in early 20th century London.

Furthermore, “what I was probably inspired by more is the fact I was born in the late 60s, but the school I went to was still very redolent of the period I’m writing about here,” he explains. “A lot of the language we used and the customs and the values of the Edwardian period were still very present in the world I grew up in. I did read a couple of books just to put myself in that world, and as a writer you pick up lots of different influences. There’s lots of stuff lurking around in your brain, but it wasn’t inspired by any specific show.”

Baker’s affinity for the period became clear when he completed the first draft of the script “almost worrying quickly” after brainstorming ideas with McGrath and Iuzzolino. When it was in place at the start of 2021, director Adam Wimpenny and producer Julie Baines joined the project and fed their own ideas into the script, such as potential filming locations and what would or wouldn’t work on screen.

“Then you’ve got the set designers, costume designers, hair and makeup… I’ve got to create a believable world in which they can then bring their skills and expertise to life,” Baker says. “It was a very much an ongoing dialogue with Adam. At his request, I wrote in extra scenes and stuff like that to give us an opportunity to showcase some aspects of the period, whether that’s the cocktails or aspects of the dress, so there was definitely a lot of to-ing and fro-ing in a very positive way. It was very collaborative.”

After being given the opportunity to write a script for an adaptation of Professor T, Baker and Eagle Eye’s first project, Baker got the chance to work with Belgian writer Malin-Sarah Gozin on the series. On Hotel Portofino, he took on board feedback from producers, commissioners and even actors, sharing conversations with McElhone about her character.

“Obviously I’ve still got stuff to learn, but a lot of it’s innate and a lot of it comes from just loving TV and having watched many dramas over the years, but also having tried to write and tell stories my whole life,” Baker says. “For instance, I took this idea of the crime story from writing the first season of Professor T. Probably some of the lessons [from that show] are reflected in the way I set up and resolved that crime story in Hotel Portofino.”

The extended broadcast schedule of the series means it might take some time to determine how successful Hotel Portofino is. Despite that, Baker is already working up some ideas for a potential second season that could return to the hotel in 1927, with subsequent seasons revisiting the Riviera each summer.

“You can move it on a year each time,” he says. “It’s always going to be something set in the summer because it’s designed for you to see that incredible coastline when the sun is shining. To film it at a time when it wasn’t sunny would feel a little bit strange, to be honest, but we’ve got plenty of runway. There’s lots of scope to keep the story going if we’re lucky enough to get a recommission.”

In the meantime, Baker is halfway through the second drafts of all six episodes for the second season of Professor T, which stars Ben Miller as an obsessive-compulsive criminology professor who helps the police with their investigations. Frances de la Tour plays his imperious mother.

Then there’s Suspect, which Baker says takes a different direction from the Danish show on which it is based. It stars James Nesbitt as a veteran detective who, after discovering his estranged daughter has died, retraces her final moments to find out what happened to her.

But with the global interest in non-English-language dramas seemingly unabating, is there still a need for English remakes? The numbers would suggest there is. The first season of the original Swedish version of Before We Die attracted an average episodic audience of 224,000 viewers across Channel 4’s platforms in the UK in 2018, compared to the 3.6 million who watched the English adaptation last year.

“So you’ve instantly increased the audience reach tenfold,” Baker says. “Walter Presents and other broadcasters and streaming services have done an amazing job in opening up the world of foreign-language drama to a broader audience, particularly in the UK. But there is still a big core of people who either won’t [watch non-English-language shows] or would prefer you make it easier.”

Baker also notes that writers have always retold other people’s stories, in the same way singers cover existing songs in their own style. “To say every story has to start in a new place is just unrealistic,” he adds. “Where someone’s got a good story and you feel you can add to it and adapt to it so that it works possibly better for a different audience, why not?

“There are some people, definitely, who prefer the original version – you get plenty of feedback on social media – but there are also many more people who love the new version, so my question would be, if you have entertained the audience and you feel like you can add value to a story, why not?”