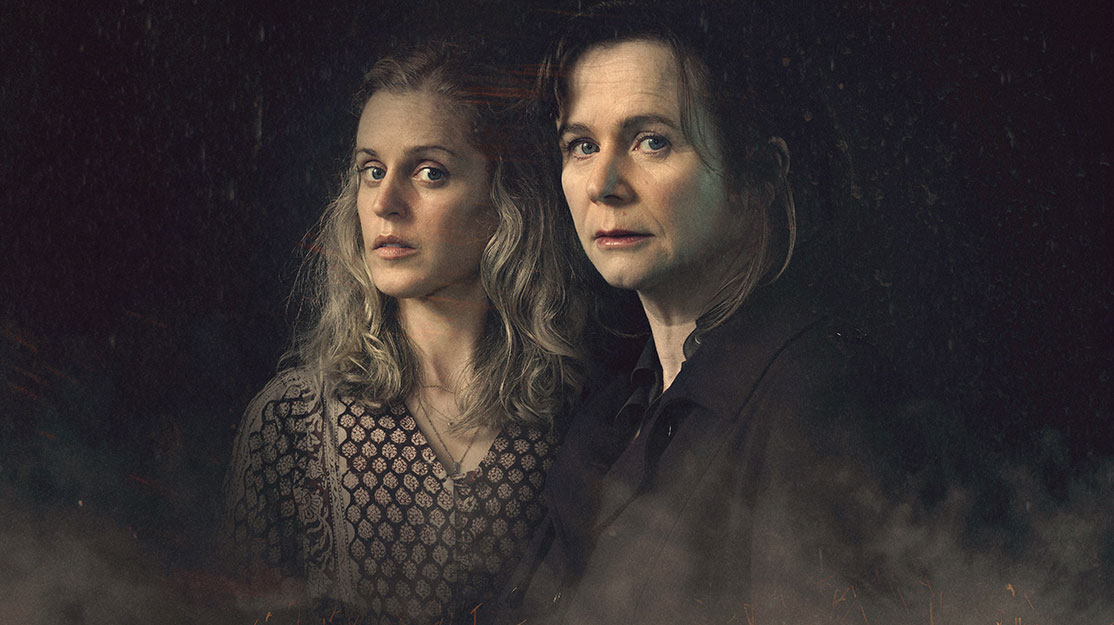 If the relationship between Clarice Starling and Dr Hannibal Lecter in 1991 feature The Silence of the Lambs has taught us anything it’s that the balance of power between interrogator and subject can quickly become twisted, tangled and reversed. Those complex dynamics are similarly at play in ITV psychological thriller Too Close, in which forensic psychiatrist Emma Robertson is assigned to work with Connie Mortensen, a wife and mother involved in a despicable crime.

Emma’s job is to determine whether Connie should face a life behind bars in a secure psychiatric hospital or be given the chance of rehabilitation and release. But her sessions with Connie quickly become a complex game of cat and mouse with confusing sexual undercurrents, as Connie offers her own searing insights into Emma’s insecurities and brutally exploits them.

As the three-parter unfolds, Emma tries to understand Connie and her complicated relationship with best friend Ness. But her search for the truth may just destroy her instead.

Produced by Snowed-In Productions (Strike) and distributed by All3Media International, Emily Watson (Chernobyl) and Denise Gough (Paula) spar in the central roles of Emma and Connie, respectively, while Thalissa Teixeira (Trigonometry) plays Ness. Sue Tully (Lethal White) directs the miniseries from scripts written by Clara Salaman, based on Salaman’s book of the same name published under the pseudonym Natalie Daniels.

Watson has known Salaman since she was five years old, the pair having gone to school together, and it was over lunch that they first discussed working together on the project.

“It always makes me nervous when a good friend of mine says, ‘Will you read something?’ but there was some real potential,” Watson explains. “The novel is very different to the screenplay. I said, ‘Keep me informed’ and it wasn’t long after that that Snowed-In picked it up. It was so thrilling to be doing something with her.”

Watson describes the role of Emma as a “classic actor’s dream,” as the character at first appears to be extremely professional and tactile yet is slowly picked apart by the very person she’s supposed to be investigating, as her own fragility rises to the surface.

“She becomes less and less able to keep that facade going, and there’s lots of things that get revealed in that process. It’s a dance between the two of us,” she says of Emma’s relationship with Connie. “It’s like two flowers opening, in a way, and we reflect each other’s situations. We break each other open. It’s a really interesting dramatic structure.”

But the high-profile nature of the case – Connie is given the tabloid nickname ‘Yummy Mummy Monster’ following her apparent suicide attempt by driving her car off a bridge with two children in the back – means there are warning bells from the start, even if Emma remains oblivious as she begins meeting with Connie.

“People have to get to a very high state of mental dysfunction and ill health to do something violent and destructive towards the people they love,” continues Watson, who worked with a consultant, Sarah Hewitt, to understand the real-life work of her character. “They have to distance themselves a very long way from reality to get to that place. And it’s really about knowing how to take that person and make them safe and bring them down. The hardest moment is when the psychosis disappears, when they realise what they’ve done and they come back to reality. That is devastating because they know what they’ve done and how many lives they’ve ruined and their own life is ruined. It’s very high-octane stuff.”

In another life, Connie and Emma might have been good friends, Watson adds, but they meet at a time when Emma is particularly fragile owing to events in her private life.

“Connie actually makes Emma feel vulnerable in a way that she’s not used to,” she says. “There’s something about being in the state that Connie’s in that makes her incredibly perceptive. They feel such a very similarly attuned in terms of emotional intelligence. She’s just at a particularly vulnerable moment in her life where that starts to get under her skin.”

For award-winning stage actor Gough (People, Places & Things, Angels in America), the opportunity to play a seemingly cruel character such as Connie was the chance to embody someone who neither wants nor demands sympathy.

“The more unsympathetic women we can play, the better, frankly,” she admits. “It seems to me men get to play unsympathetic characters and be lauded. And no offence, I love men but women, especially when you play a mother, have to have a reason they’re this bad – something bad happened to them. My stage background is [playing] women who are not asking for that because in life we’re not always asking to be sympathetic. Women can be horrendous too. And we have to be allowed to tell those stories. I don’t want to just play heroic women my whole life. It would be so tedious.”

In fact, Gough plays two Connies in the series: the one in the present day facing off against Watson’s Emma and a second who appears in flashbacks, as Connie recounts her friendship with Tess and potentially the events that led her to the bridge.

Gough researched psychosis and amnesia to understand the mindset of a trauma victim, but mostly wanted to place herself in the position of a woman who is questioning all the decisions she had made over the previous few years.

“She’s having to rethink everything. Are we allowed the same luxury of just walking away from everything, of blowing up our lives? She does something very dramatic to blow up her life,” the actor says. “But I’m always interested in female friendships because that is key. Mostly I do my research on the thing that is the character’s biggest through line, so that was all about mental health. But everybody should just research on that, especially now [during the Covid-19 pandemic].”

Another part of Gough’s preparation were the regular three-and-a-half-hour stints she spent in the make-up chair, as she was given bruises, scratches and scars – plus a cropped hairstyle – to present her injuries after the car crash. Those “rough” make-up calls were considerably longer than those for the flashback scenes, which would run to just 30 minutes.

“I had all the best will in the world to meditate for three-and-a-half hours but you don’t do that,” she says. “I listened to true crime podcasts, lots of murder, lots of death. I am learning Greek, so I did a little bit of that. But the chair is uncomfortable. You have to find the right kind of way to sit. And then a lot of the time I was just bitching and moaning about the fact I was sat in that chair, while all the while being very grateful to be at work.

“It was [hair and make-up designer] Sue Wyburgh and [make-up supervisor] Beatriz Millas who did it. They had to work with masks and visors and glasses as well. I stayed as good humoured as I could because their job was harder than mine. It was a pain in the arse.”

Once she was ready, however, her altered appearance certainly set the mood for her performance and those scenes with Watson, in which the power balance teeters delicately between the two characters. “By the end of it, I’d be a bit stressed out. Maybe the answer to my dramatic performances on TV is to be in the make-up chair for three-and-a-half hours,” she jokes.

Filming for the miniseries took place in London, with some scenes set on leafy Hampstead Heath and prison and hospital scenes shot inside Holloway Prison, which housed and rehabilitated adult women and young offenders before its closure in 2016.

“There was a sense of all these women with ruined lives. It was a very powerful little crucible to be in,” Watson says. Gough continues: “No prison is fun to work in because you can feel the energy of it. But I thought of all the women that actually went on to get their lives back as a result of going there. It’s grim but it was a great place to do all of that stuff.”

Gough, who has been cast in Disney+’s upcoming Star Wars series Andor, also had to film scenes on the Isle of Sheppey. “It was raining so hard and I had to sit in the freezing cold rain in my pants, crying. That’s all real – when you see those tears, they are tears of sheer pain, sitting in the rain.”

It’s a far cry from treading the boards in London’s West End or New York’s Broadway. Gough’s screen career has been building steadily but it’s the theatre she considers home.

“The stage is the stage. You can’t compare the two,” she says. “The stage is where I live; it’s all I ever wanted to do. I’m getting to do this TV and film stuff now and it’s brilliant and I’m getting better at it and learning to be better at it. But get me home as soon as I can because I’m in charge on stage.

“Do you know how little power I have on TV? You do all of this work and then you go, ‘OK, here, please don’t wreck what I’ve done.’ You break your heart for screen work sometimes and then you see it and you go, ‘Oh, really, it’s that?’ I’ve learned to treat the experience of making TV as I do theatre, so I’m in the moment with it and it’s the experience of making it that becomes my experience. Then I forget a year later everyone’s going to watch it. And also I can’t get standing ovations and that pisses me off!”

Gough and Watson, who have both suffered the effects of Covid over the past year, previously appeared on screen together in 2017 miniseries Apple Tree Yard, while Gough watched Watson’s Oscar-nominated performance in 1998 biopic Hilary & Jackie when she was at drama school. In Too Close, they are part of a female-led team that also includes director Tully, writer Salaman, producer Letitia Knight, editor Kim Gaster and director of photography Neus Ollé.

“There’s immediately a change in the dynamic in the room if there are a lot of women behind the camera,” Watson notes. “It’s as much in my head as anybody’s, that sense that I find it a bit more relaxing. It’s just a slightly different atmosphere and it brings something different to it. I’m very much [of the opinion] that the right person for the job is the right person for the job, but in terms of representation in the industry, it’s great to see it.”

As for Emma, viewers will slowly uncover details of the “powerful” past events that continue to haunt the character when Too Close launches on ITV on Monday, with all episodes airing over three consecutive nights.

“She hasn’t been entirely honest with herself or other people about what’s happened and it’s about the unburdening of that very particular thing,” Watson says. “It’s like when there are lots of little quakes going on and she knows it’s coming. She sees in Connie a reflection of what could happen to anybody given the right circumstances. There’s a path of mental disintegration that’s available to us all.”