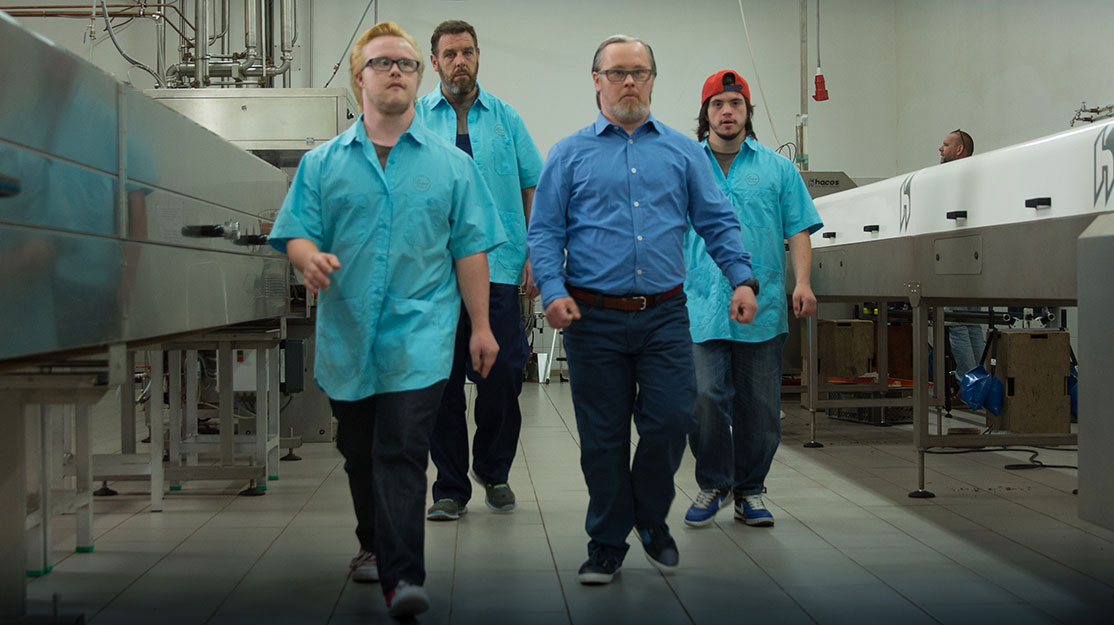 VRT and the chocolate factory

Belgian producer De Mensen partnered with a unique theatre company to make heart-warming drama Tytgat Chocolat (Team Chocolate). Co-writer/director Filip Lenaerts and producer Pieter Van Huyck recall the origins of the series, which is an example of how television drama can break down disability barriers for actors.

Flemmish drama Tytgat Chocolat (Team Chocolate) follows one man’s journey across Europe to be reunited with the love of his life. But the inspiring story behind this heart-warming romantic comedy goes far beyond the plot, thanks to a unique partnership that brought together the cast and crew for an adventure both on and off screen.

The show centres on Jasper Vloemans, who works at chocolate manufacturer Tytgat Chocolate and falls in love with Tina, a woman from Kosovo. When she is suddenly deported back to her home country, Jasper and his friends set out off a road trip to find her.

But what distinguishes Team Chocolate from other series is that Jasper, played by Jelle Palmaerts, is a young man with Down’s syndrome, and the chocolate factory employs people with mental health issues and learning difficulties.

Produced by De Mensen for Belgian public broadcaster VRT, the series was born from a partnership between De Mensen and Theater Stap, a Flanders-based theatre company for people with learning difficulties. Actors from the company play all the lead roles in the show.

The drama was first pitched in 2010, when documentary maker Filip Lenaerts began shooting a film at Theater Stap. He then partnered with the theatre’s creative director, Marc Bryssinck, to bring the acting troupe to the screen.

A short film called Lord of the Flies was produced, before Lenaerts and Bryssinck approached De Mensen with the idea for a scripted series. The duo were already in talks with VRT, so the development process was well underway by the time De Mensen came on board.

Producer Pieter Van Huyck recalls: “We do all kinds of genres, from very niche, bizarre comedy to broad romantic stuff and whodunnits. But we always try to find a unique angle or a unique reason to do the project. In this case, the reason was very obvious.

Van Huyck notes that the cast sometimes had difficulty memorising a lot of text or needed help to understand a particular scene, but says they were all extremely talented when it came to showing a wide range of emotions.

“Their acting style is very true and that was something that touched us, so we knew something would be possible,” he continues. “With Marc and Filip, from the start it was very logical for them to make a story about what the actors find important in real life, which is to be independent, to find true love, to make their own decisions and to have relationships. This is the true subject and also what is going on in the lives of these people. That’s why they really understood the script.”

That a Belgian drama would be set in a chocolate factory seemed like a no-brainer to co-writer and co-director Lenaerts. “We had almost no doubt about the chocolate factory,” he says. “We started to discuss it and it’s a bittersweet story so it’s like chocolate, and it’s a Belgian product. We thought it’s a nice thing and, more specifically, we have Belgian truffles in the show that a lot of people know from their childhood. It’s a very Flemish thing.”

Lenaerts describes writing the series with Bryssinck as a very collaborative affair. Indeed, they sat together every day to pen the scripts, starting in February 2014 and working for about 12 months.

“Since Mark and I are unexperienced drama writers, it took a long time because we had to learn how it worked technically,” says Lenaerts, who filmed Belgian science series De Herontdekking van de Wereld. “So we didn’t write it with the production in mind. We were not thinking about whether something would be too difficult or too expensive. We just wrote what we liked, which made it quite a difficult shoot because we had lots of different and complex scenes and different actors. So it was quite hard work for us for a few months.”

Pre-production began in March 2015 and Lenaerts and Bryssinck were separated for a few months. “Mark was working with the actors and rehearsing and I was finishing the scripts, the location-hunting and the casting,” Lenaerts says. “Then in May 2015, the circus started. We went on the road until mid-September.”

Rehearsals began with rough versions of the script, which was then polished several times to incorporate the actors’ own improvisations.

“This process was repeated several times and there were two advantages,” Van Huyck says. “You recreate a true and feasible story because part of it is coming out of these people’s hearts, minds and lives. Secondly, it enables you to check which scenes are difficult to play and should be adapted. So that prepared us for the shoot, and during shooting the tempo was a little bit slower. We shot fewer scenes per day, but not too [few], because we wanted to treat them as real actors. We also had a budget, which was limited of course, but we had extra people on set to take care of the actors, to assist them and comfort them. Marc, who is very experienced in working with these guys, was around all the time.”

The seven-part series, which debuted on VRT-owned Één in September, was shot entirely on location. “We don’t have the budget to construct very good-looking, expensive studio sets, except for series that are commissioned directly for more than one season, because [with those] we can spread the cost,” Van Huyck explains. “So for a one-off like Team Chocolate, we just didn’t have the budget. We tried to find the right locations and everything was shot in Belgium.”

Lenaerts admis that working on the series felt like he was back in film school, as he had to dispense with his documentary background. But he says preparation was key to staying afloat – adding that, in any case, drama and documentaries aren’t too dissimilar. “You have to tell a story so they’re not that different in essence,” he continues. “Being a director on this huge film set, I just tried to react very intuitively. When I got hundreds of questions, I really tried to give quick answers. I was also surrounded by experienced people. I learned a lot.

“In Team Chocolate, on a Flemish level, almost all the most famous actors are in the series, even for small parts. Often Theater Stap had worked with them before on a theatre stage, so when they heard those guys were making a drama series for television, they were very enthusiastic to join. So the Theater Stap guys were surrounded by great actors and were pushed a little bit. The Theater Stap actors were also challenging our other actors because they were so powerful sometimes. I was really proud of how they did it.”

Team Chocolate was screened at C21 Media’s Content London in 2016 and was also part of the line-up at Series Mania earlier this year. Wild Bunch is handling international sales of the series, which Van Huyck surmises as a “touching show that is feasible for everybody to watch.”

He continues: “This is really for a broad audience, to watch with the whole family – the parents, the kids, the grandparents, even the pets! This is not edgy stuff, it has nothing to do with pay TV stuff, but I still think a lot of people can like this show. When you start watching this show, you need a few minutes to see these actors but very quickly you forget they’re different and you just see characters, characters you really believe in. That’s something to be proud of.”

The producer also believes the series should encourage others to work with actors who may have disabilities, in whatever form.

“We hope it encourages other people in other countries to try to create their own show with actors who are different,” he adds. “We really think it’s a beautiful way to tell their story without patronising them or approaching something as a social project. They should be treated as real actors and, if you give them that opportunity, their performance is really amazing.”